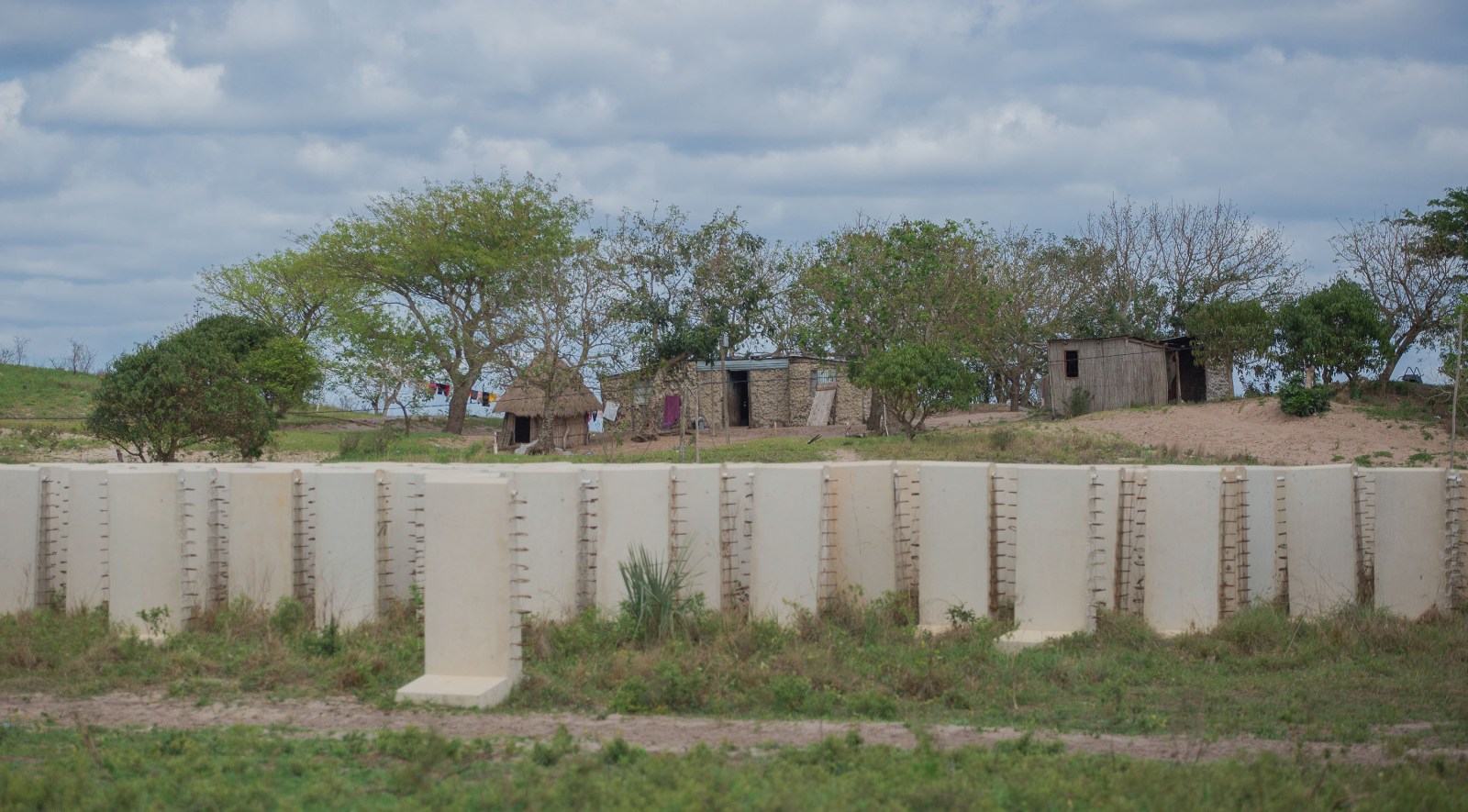 Concrete barriers that are not yet operational but are intended to separate Manguzi and Mozambique as an anti-crime barrier. By 2020, only 166m of the wall had been constructed, even though R48-million was paid to the contractor. The amount should have covered the cost of installing 3km of border wall. The SIU is investigating. (Photo: Supplied)

The border community of Manguzi feels under siege from armed syndicates, yet one of the solutions to bring stability to the area – Jersey barriers – has been mired in controversy, and is currently on hold.

The installation of concrete Jersey barriers – also known as border walls – along the porous fence that separates South Africa and Mozambique in the far north of KwaZulu-Natal was hailed as the solution that would bring an end to vehicle smuggling in the area.

The project has now been halted and is facing a number of disputes. The so-called construction mafia, Amadelangokubona, have invaded the site, saying they want a piece of the project.

The project is the subject of investigation by the Special Investigating Unit (SIU), which is probing allegations of corruption and maladministration at the KwaZulu-Natal Department of Transport when awarding this tender.

The SIU embarked on the investigation after allegations of tender rigging circulated. The outcry was so widespread that it attracted the attention of Parliament. On 9 October 2020 the National Assembly’s Portfolio Committee on Public Works and Infrastructure made an on-site visit to the so-called Jersey Barrier Wall Project at the border between South Africa and Mozambique in KwaZulu-Natal as part of the investigation.

The committee’s report, issued in October 2020, found that only 166m of construction had been completed even though R48-million had been paid to the contractor/s. The amount should have covered the cost of installing 3km of border wall.

SIU spokesperson Kaizer Kganyago told Daily Maverick they started the probe after “we received allegations from an unnamed whistle-blower, claiming that the transport department has executed the project of constructing a concrete barrier, despite the legal mandate of such project resting with the Department of Public Works and Infrastructure.

“The investigation is ongoing as we are still collecting further documents after our initial document analysis and witness interviews. We are expected to conclude the investigation in May 2022 in line with the project plan. However, the completion date depends on SIU getting the required information timeously.

“At this stage we are looking into the procurement process and delivery ‘value for money’. We are probing allegations of the contravention of KZN Department of Transport procurement processes as well as noncompliance with PFMA [Public Finance Management Act].”

The KZN MEC for Transport, Peggy Nkonyeni, issued a statement earlier this year saying she welcomed the investigation by the SIU and that the KZN Department of Transport would fully cooperate with the investigation and would share all necessary documentation, including the expenditure of the projects.

“The construction of the new Jersey barriers is a decision of the government after a huge outcry from the community of eManguzi on the rampant vehicle theft, which was then taken across to Mozambique. This resulted in violent protests, with the people of uMkhanyakude shutting down the entire town of eManguzi, which affected the movement of goods and trade, tourism and other strategic activities between South Africa and Mozambique.

“We reaffirm our commitment to working with all enforcement agencies to investigate and deal with corruption. We, however, wish to affirm the strategic nature of this project to the people of KwaZulu-Natal, in particular uMkhanyakude District,” said Nkonyeni.

Some of the victims of hijacking said it was unfortunate that while they were under siege from cross-border crime syndicates who were hijacking their cars and smuggling them to Mozambique, some government officials saw this as an opportunity to squander public funds by awarding corrupt tenders.

A KZN Department of Community Safety and Liaison official said the project would only resume once disputes had been sorted out. DM

Read Part One, Part Two and Part Three of this series.