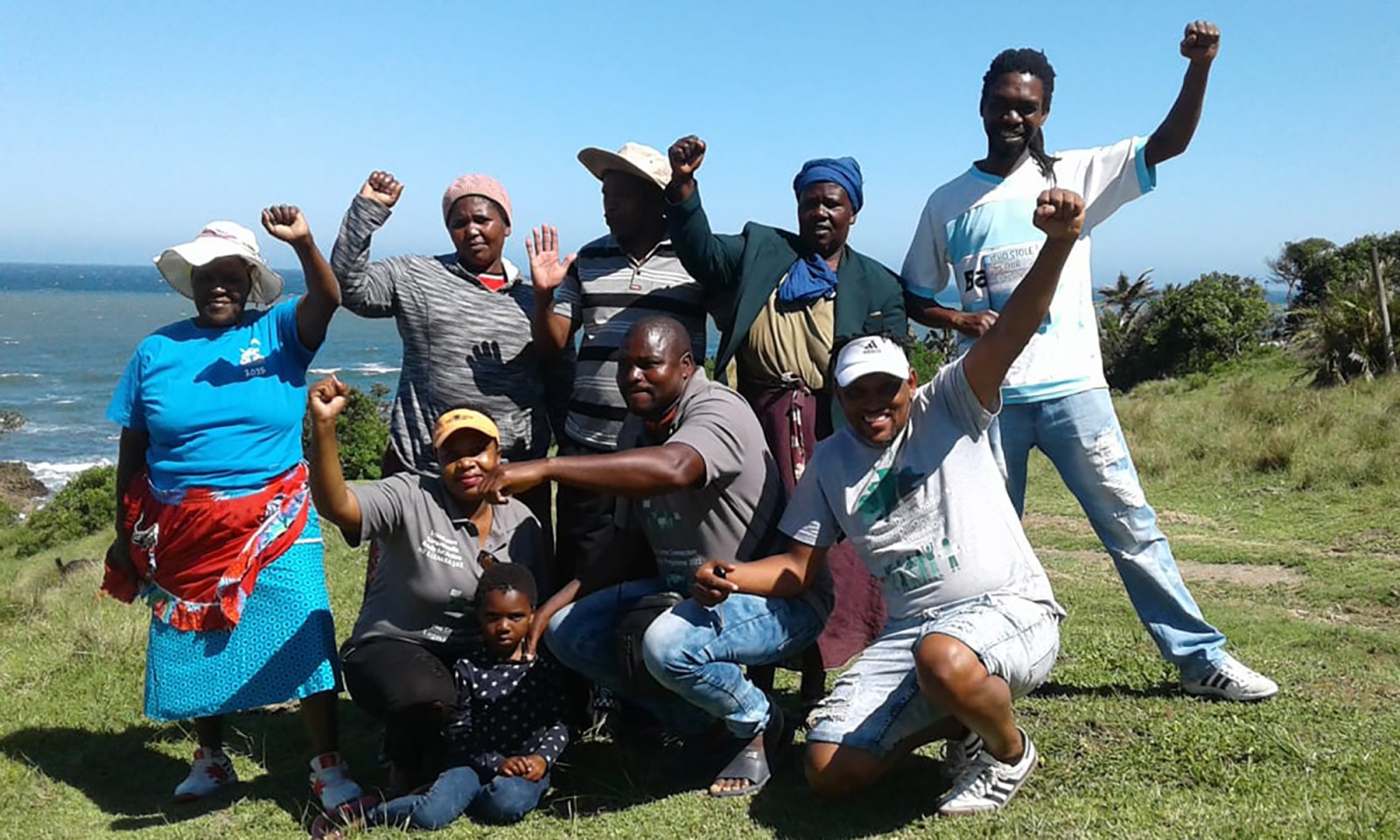 Port St Johns fishers show their support for the campaign against the planned Shell seismic survey for oil and gas in the ocean off their area. (Photo: Supplied)

Shell has announced that it will carry out a three-dimensional seismic survey in search of oil and gas deposits from Morgan Bay to Port St Johns off the Wild Coast, starting on 1 December. Almost 90,000 people have signed a petition against the exploration.

By Monday evening, more than 87,000 people had signed a petition by the Oceans Not Oil coalition calling for an end to planned intense airgun blasts by Shell to probe for oil and gas off the Eastern Cape coast.

Oceans Not Oil founder Janet Solomon said: “There are 87,100 signatures in the petition. Hundreds of comments and objections have been sent to the environment assessors.”

Last week, Daily Maverick reported that marine activists in the Eastern Cape had voiced their anger after Shell announced that it would carry out a three-dimensional seismic survey in search of oil and gas deposits from Morgan Bay to Port St Johns off the Wild Coast, starting on 1 December.

Shell has appointed Shearwater GeoServices to conduct the survey, which will last from four to five months and cover 6,011km² of ocean surface. The survey area is more than 20km off the coast, with its closest point in water depths ranging between 700m and 3km.

The seismic airgun blasts will increase the cacophony of sounds in the underwater world, adding to those made by whales, dolphins and fish.

East London Museum scientist Kevin Cole said seismic testing on the marine environment had been found to have disastrous effects on animals.

The airgun noise, according to Cole, will interfere with animals’ own sounds, causing physical effects, stress and behavioural changes in dolphins, whales and porpoises.

“Surveys are currently under way on the east coast, with the intention of drilling wells if hydrocarbon potential is located. Internationally, seismic surveys have been demonstrated to have negative impacts on a range of marine organisms, from smaller creatures which live in sediments or as plankton, and larger animals such as fishes and marine mammals,” said Mann.

She said there were particular concerns about the risks of drilling for oil, given that the South African coast is influenced by one of the fastest-flowing oceanic currents in the world.

“This Agulhas Current is not static — it has meanders up to 100km in width, and while it generally flows from north to south, current reversals are not uncommon, particularly in deep water. Large-scale eddies passing by complicate the flow, with offshore water frequently reaching our coast,” said Mann.

She said the power of the current is such that attempts to contain any accidental spillage or normal operational spillage were likely to be unsuccessful.

“We have recently seen graphic evidence of this, with the spreading of plastic nurdles from Durban Harbour along the entire coast of KwaZulu-Natal and the Eastern Cape within days of their being spilt.

“While, internationally, the risk of a catastrophic blowout (large-scale oil spill) is rated as very low by environmental impact assessments, this does not take into account the increased risks posed by the harsh, unique, physical environment found off the KZN coast,” said Mann.

“Importantly, the potential impacts of developing and running shore-based facilities for the processing and transport of oil and gas, should they be found in viable quantities, have not yet been considered,” she said.

Mann said the best way forward for environmental sustainability and local job creation was to expand technology that made use of renewable energy.

“The global market is moving away from fossil fuels, given the potentially catastrophic effects of human-induced climate change. Indeed, if South Africa and the world are to meet the goals set by the Paris Agreement of limiting global warming to less than 1.5°C, it is reliably estimated that a third of oil reserves, half of all gas reserves and 80% of known coal reserves should remain unused,” added Mann.

She said they considered that the potential short-term, non-sustainable benefits to be gained from oil and gas are largely outweighed by the environmental risks posed by exploring for and using these non-renewable energy resources.

Albi Modise, the director of communications at the Department of Forestry, Fisheries and the Environment (DFFE), said that during 2013, Impact Africa Limited had applied for exploration rights in terms of the Mineral and Petroleum Resources Development Act (MPRDA).

“The approval of this application was granted by the minister responsible for the Department of Mineral Resources and Energy or his delegate, in terms of MPRDA.

“The DFFE and the minister responsible for the DFFE were not involved in any aspect of this decision-making process for the proposed exploration activities, including the environmental impacts thereof, particularly as the application process was finalised prior to the coming into effect of the One Environmental System… on 8 December 2014,” he said.

Modise said the authorisation granted by the Department of Mineral Resources and Energy minister, under the Mineral and Petroleum Resources Development Act, remained valid and binding until set aside on review by a court of law, and the Department of Forestry, Fisheries and the Environment and its minister were not in a position to comment.

The Department of Mineral Resources and Energy had not, by the time of publication, responded to emails and SMS messages requesting comment. DM/OBP