Rapid land release for housing sounds great in theory, but well-structured delivery is key to its success 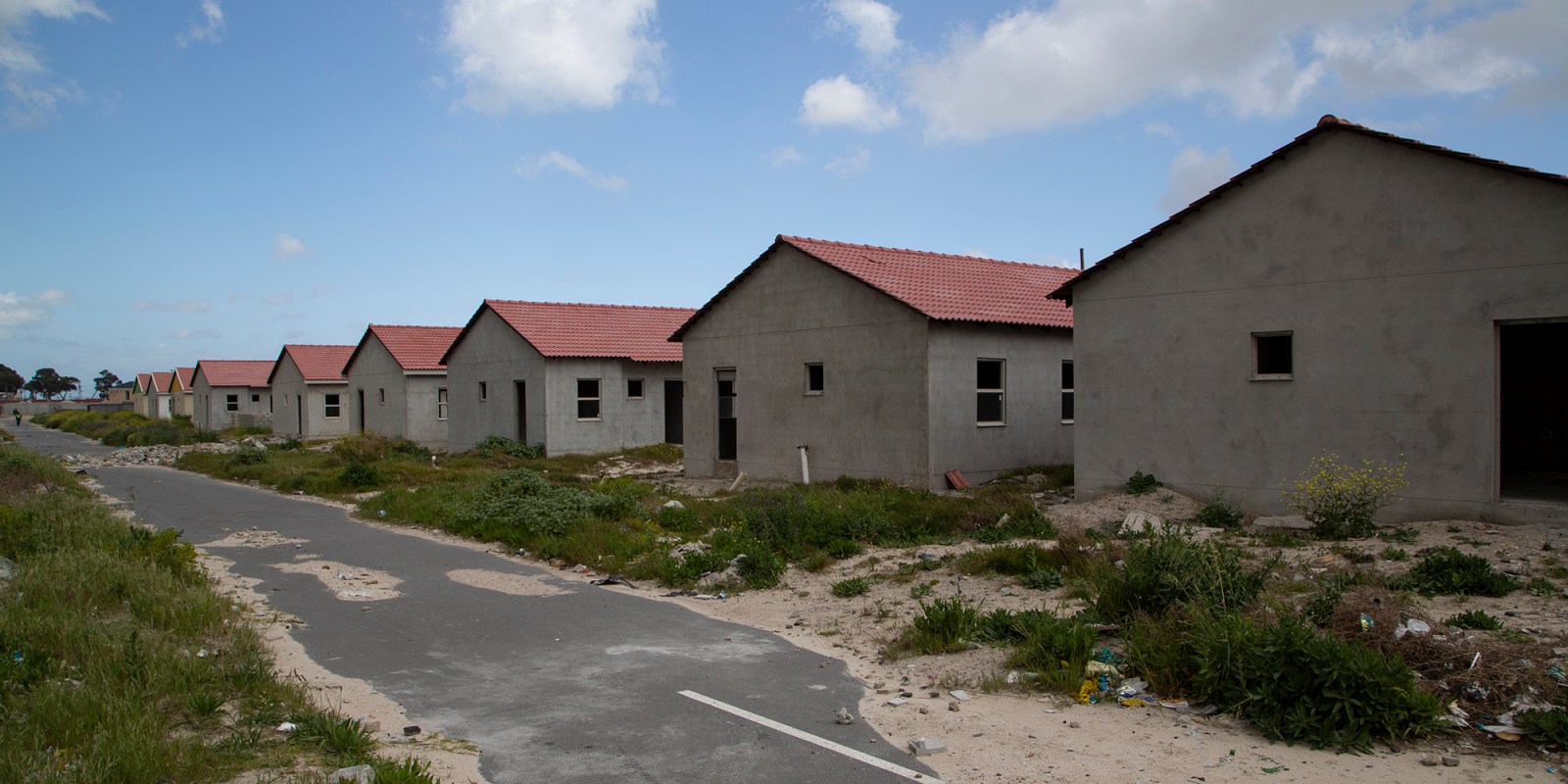 On the surface, it sounds like a panacea for all of South Africa’s housing problems. Once ground is broken however, the obstacles to housing delivery are more evident. The success of releasing serviced land for housing depends on a host of other contingencies.

The 2021 local government elections have once again cast a spotlight on the lived conditions of many South Africans. Over a million South African households are without adequate access to land and housing. With no other alternative, many often resort to illegal occupation of land and inner-city buildings. Access to land and housing were central concerns in the local government elections, with each of the three major political parties committing to accelerate access to land for residential purposes in their manifestos. What are the current policy intentions and budget commitments regarding urban land access?

On 18 May 2021, Lindiwe Sisulu, then at the helm of the Human Settlements Department, delivered the department’s budget vote. She outlined the department’s forthcoming financial priorities, and it was business as usual until the minister admitted that the department was pursuing a policy shift toward the release of land. Rapid land release is not an entirely new approach and has been in and out of public policy debate for some time, previously adopted in both the Western Cape and Gauteng.

Although official policy or programme documents are hard to find, gleaning information from media statements concerning the national approach, and some provincial and municipal intentions, rapid land release appears to be envisioned as a DIY housing process — a “site and service” delivery mechanism where parcels of serviced land are allocated to beneficiaries who then build their own housing structures.

It slots into government’s incremental interventions for housing development which form part of the National Housing Code. The programme’s attractiveness is derived from the assumption that self-build houses will quicken the pace of housing construction, thus addressing the South African housing crisis faster and more cheaply.

Further stated outcomes are an increase in asset ownership and security of land tenure, as well as addressing informal housing and land occupations. In addition, claims are that the approach will build skills in communities and generate better quality houses. Government also argues that it lightens the state’s fiscal burden through the interdependence between self-build and serviced land delivery.

On the surface, rapid land release sounds like a panacea for all South Africa’s housing problems. Once ground is broken however, the obstacles to housing delivery are more evident. The success of releasing serviced land for housing depends on a host of other contingencies. In the absence of a detailed policy and programme framework, which in May the minister promised will be released “soon”, one can only hope that the issues of land acquisition, service delivery and participation are realistically dealt with.

As highlighted by civil society, independent consultants and journalists, the inefficiencies of housing delivery programmes in the past do not merely disappear with the introduction of a programme of rapid land release. Rigorous costing mechanisms must be implemented; adequate training for community constructors is a minimal requirement for decent self-built houses; and proximity to economic hubs must be a prerequisite when choosing land to release.

Arguably the single most important factor is community participation. For any of the benefits of self-build programmes to be realised, substantive and consistent community engagement must occur. There may be a role for the Finance Linked Individual Subsidy Programme (Flisp) to play in raising funds for projects. However, limiting the scheme to benefit Flisp qualifiers only will significantly reduce the number of beneficiaries and ultimately render the programme narrow in its reach.

While government rhetoric appears to confirm commitment to the rapid release of land, close monitoring of achievements against targets is necessary. The Department of Human Settlements aims to release 300,000 serviced sites by 2024. The bulk would be the responsibility of local government, financed by the provincial equitable share.

If a programme of rapid land release is to be successfully monitored, however, these serviced sites must be differentiated in the reporting of the grant spending — currently, the numbers indicate achievement across all housing programmes. In addition, under-spending by certain provinces has resulted in funding stoppages by the department. In July 2021, the Department of Human Settlements called on provinces to utilise funds allocated to them to improve quality service delivery during the 2021/2022 financial year. The under-spending problem must be converted into productive spending so that all provinces can achieve their targets, because these targets are explicitly related to decent housing opportunities for communities.

Inspection of provincial progress reveals that certain provinces seem to be better at delivering serviced sites than others, as per the Department of Human Settlements Annual Report 2019/2020. KwaZulu-Natal achieved only 66% of its target while the Eastern Cape achieved 144% of its target.

Gauteng is worth considering in greater detail due to its early adoption of a rapid land release programme. Despite this head start, Gauteng’s track record on delivery is especially poor considering it was launched in the province in August 2018, two years before the national budget vote by Minister Sisulu. This poor performance is evident in the lack of policy coherence and the recurrent community protests demanding transparency and implementation.

The 2018 Estimates of Provincial Revenue and Expenditure (EPRE) for Gauteng made no mention of the programme. In the 2019 EPRE, the target of delivering 3,678 serviced stands was meant to be reached by benefiting from some of the R6.2-billion earmarked for housing projects. However, the programme was absent in the service delivery measures of the budget vote.

In 2020, Gauteng failed to achieve its target to deliver 2,000 land parcels. The province acknowledges its shortfalls, admitting that their chronic lack of planning rendered them unable to deliver serviced sites to beneficiaries. When pressed for explanations as to the slow delivery of housing, there is a tendency to blame unlawful occupation and urban migration for hampering progress.

The targets of the 10-year action plan, Grow Gauteng Together 2030 (GGT2030), are necessarily ambitious, considering the sheer scale of the housing crisis. By 2030, the GGT2030 plans to deliver 100,000 serviced stands under the rapid land release programme. Following the August launch  in Gauteng in 2018, housing activists began protesting as early as October that year — citing a lack of communication by the then MEC of Human Settlements.

These protests have not let up, re-emerging in 2019 and 2020 as delivery and transparency of the Gauteng programme consistently falls short. It is essential that the programme transforms from an attractive political talking point to a well-developed housing delivery mechanism.

Furthermore, a national programme must be clearly delineated from other programmes including the Upgrading of Informal Settlements Programme (UISP). In her budget vote speech, the erstwhile minister outlined the UISP as a priority adding that there are over a thousand informal settlements that have been targeted by provinces and metros for upgrading in the current year.

Over the next three years, the Department has ring-fenced about R10-billion to accelerate the upgrading of informal settlements countrywide.

The UISP provides a good policy framework for improving the lives of informal settlement residents. It offers one of the best mechanisms for securing land and providing access to basic services. However, the programme remains under-utilised with funding often re-allocated to other programmes due to under-spending. While this persists, informal settlements residents remain with inadequate access to safe water, sanitation, electricity, and insecure tenure.

As the dust settles on the local government elections amidst a crisis at the municipal sphere, fiscal “austerity” and deteriorating livelihoods, we need to hold government to account on where resources are spent and how. While rapid land delivery holds much promise, it could fall short without transparency, consultation, quality service delivery and timeous approvals. DM

Edward Molopi is a research and advocacy officer at Seri.