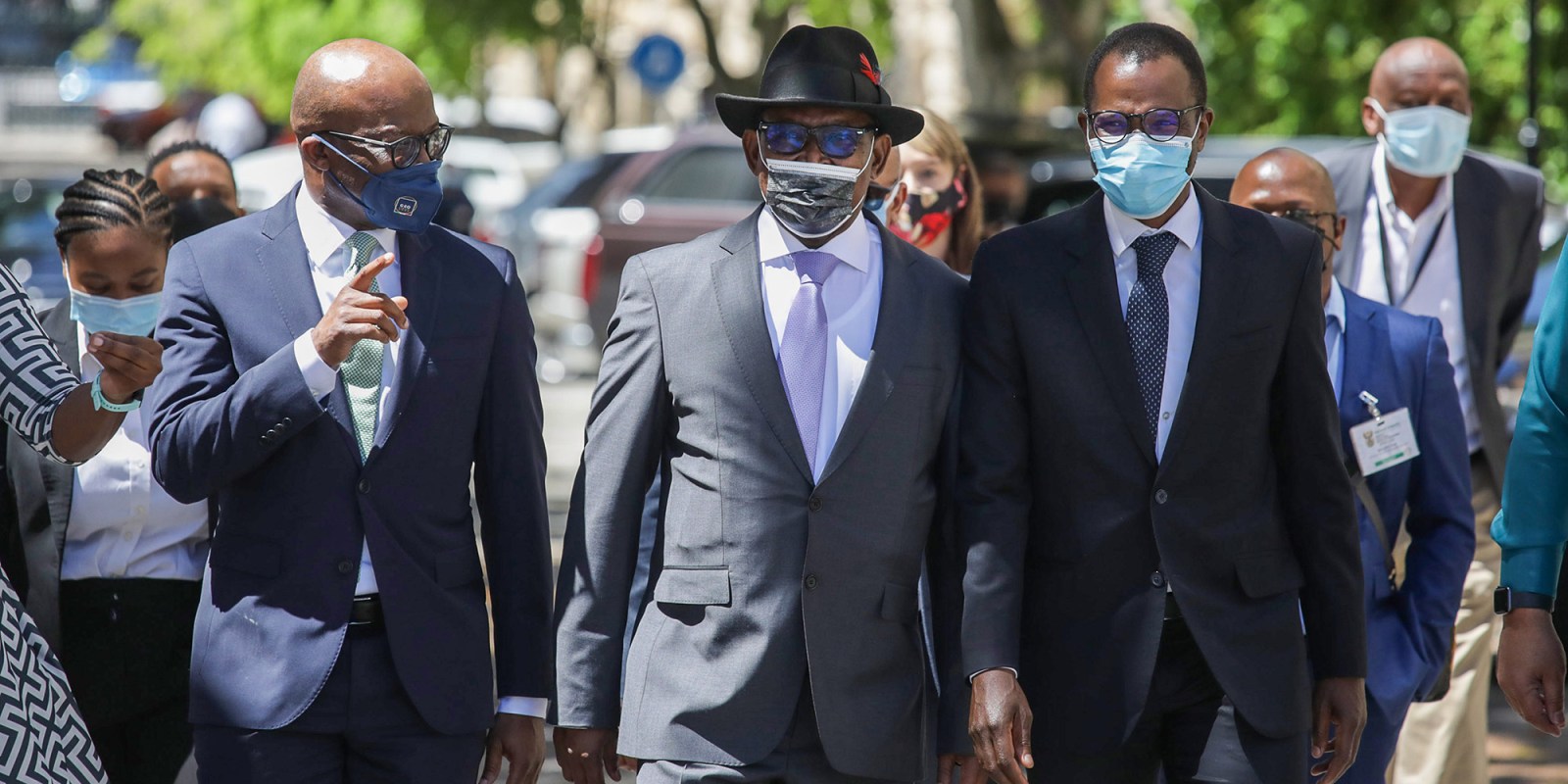 Enoch Godongwana, South Africa's finance minister, center, arrives for his mid-term budget presentation to parliament in Cape Town, South Africa, on Thursday, Nov. 11, 2021. Rolling blackouts will be in effect for South Africans on Thursday afternoon when Godongwana attempts to convince investors theres light at the end of the tunnel for Africa's most industrialized economy. (Photo: Dwayne Senior/Bloomberg via Getty Images)

‘I wear better shoes than him. Maybe in cooking, I’m not as good as him. As far as the economy is concerned, I am on the same page.”

With that, Finance Minister Enoch Godongwana signalled the continuation of his predecessor Tito Mboweni’s tough line on reining in expenditure and paying down South Africa’s R4.3-trillion debt. Already 21 cents of every R1 collected for tax go to debt-service costs.

The 25th Medium-Term Budget Policy Statement (MTBPS) and Godongwana’s maiden speech were done a little differently this time. No aloe, no hippo’s jaws.

However, as is the tradition, the finance minister made the rounds among journalists gathered at the stairs of the National Assembly to catch politicians and others for a quick comment.

Old-school, like his fedora, and a nod to the importance of being approachable. But it may just make the difference — Godongwana being approachable and talking to people, including critics. The tone and style should be watched.

Opposition parties were not necessarily enamoured, but remained comparatively muted.

DA MP Dion George said more was needed on debt containment, as “steps that he announced will not be enough”, and he also wanted more details on Eskom and other issues.

Freedom Front Plus MP Wouter Wessels said,“The minister made the right noises, admitted to the challenges. The big problem is that what’s missing is the policy and policy certainty to create an environment for investors.”

The IFP said “a small glimmer of hope” was the announcement of the end of bailouts for state-owned entities (SOEs) (except Denel), even if details remained scant. “The people of South Africa have been betrayed by those who were entrusted to manage the public purse.”

Unsurprisingly, the ANC warmed to the MTBPS. “We welcome this. It’s a pro-poor Budget,” said ANC national spokesperson Pule Mabe.

Importantly, labour federation Cosatu seemed rather muted in its “disappointment” with the MTBPS announcements.

“We did not see new and bold enough initiatives to get us out of this crisis,” said the labour federation’s parliamentary liaison, Matthew Parks, adding that South Africa was in recession, with a 44.4% unemployment rate.

The R10.9-billion Presidential Employment Stimulus was welcomed, as was the possibility to engage on what happens after March 2022 when the R350 monthly Social Relief of Distress grant ends.

Speaking to journalists before presenting his maiden MTBPS, Godongwana said discussions still needed to unfold. “Between now and the end of March 2022, government is going to decide what to do. Not Treasury.”

It’s a defence, at least for now, of the National Treasury against the sharp criticism thrown at it by a vocal civil society lobby for a Basic Income Grant (BIG), and the hard line on expenditure cuts.

Whatever the outcome of discussions on social protection, the MTBS, on paper, and Godongwana, in person, strictly linked this with spending shifts away from other items in the short term, and better growth in the long term.

“Details on our interventions with regards to the social security net will be provided in the February 2022 Budget. Let me, however, reiterate that a permanent solution in responding to these challenges is to achieve high and sustained levels of economic growth.”

Later, Social Development Minister Lindiwe Zulu, speaking to the SABC on the steps of the National Assembly, downplayed any disappointment to also talk about affordability and sustainability.

Similarly kicked along to the February 2022 Budget was any announcement on solving the dire straits of municipalities, which has been described as a key risk to South Africa’s economy. Of the 257 councils, 43 are in a steep financial crisis and 100 are on the verge of financial chaos.

While Godongwana informed MPs that he had told premiers and MECs to ensure stability, the MTBPS document highlights a series of discussions since August 2020 to ensure a better local government system.

“Substantive changes are required to improve municipal capabilities. The review proposed a new framework to build a capable local government by improving the current system incrementally and identifying pilot sites for innovation and experimentation. The 2022 Budget will detail the next steps in this project.”

Pension reform to allow hard-hit workers to withdraw at least some of their funds — this has long been a union demand — takes a step forward with soon-to-be-published proposals to boost flexibility by allowing partial access in a “two-pot system” once required legislative changes are approved. Further announcements will be made in the 2022 Budget.

The tough-love line comes as the numbers, while not that great, are looking up, with tax collection boosted by R120.3-billion, predominantly through a mining tax windfall.

But that tough-love line extended to no bailouts for SOEs, with the exception of arms manufacturer Denel, which received R2.9-billion to meet its debt.

No more money was made available for Eskom — in 2019 it got R23-billion a year for 10 years in addition to another R59-billion bailout — as South Africa was ditched into another bout of rolling power cuts. This year is set to be the harshest year of power outages, with more than 1,000 hours lost, according to Engineering News

The focus would not be on fixing Eskom, as had been the focus for the past 13 years, but on diversifying the energy mix. One such step already taken was the raising in June of the licensing threshold for embedded power generation to 100MW.

But renewable energy options remain steeped in what appears to be disjunction at Cabinet level, where Mineral Resources Minister Gwede Mantashe speaks favourably of coal and building coal power stations.

And that’s where the foundation of the MTBPS might just become undone — those much-needed structural reforms that have been talked about for well over a year.

At the traditional pre-MTBPS media briefing, Godongwana pointed to factors beyond control, like court cases and the need for significant regulatory and legislative changes.

“My own reading is that there is commitment,” said Godongwana about his Cabinet colleagues. As did Minister in the Presidency Mondli Gungubele, also citing the new 100MW embedded power licence threshold and port corporatisation.

Steps are under way to bring about a one-government plan, which is what government calls its coordinated planning across departments. Draft departmental annual performance plans had been submitted to the Presidency by the end of October, and work was under way to ensure that everything came together cohesively. Monitoring and evaluation were crucial.

Priorities were regulatory and structural reform, and the security cluster to “deal with crime networks so those who already invested stay, and those who are interested [to invest] will come,” added Gungubele.

The finance minister reiterated that the strategy of stabilising government debt was difficult, and that measures to deal with social protection, joblessness and poverty would depend on available resources and policy trade-offs.

“The key to solving our development challenges is the need to push ahead with structural reforms necessary to unlock the growth of our economy,” said Godongwana in Thursday’s call to action. DM