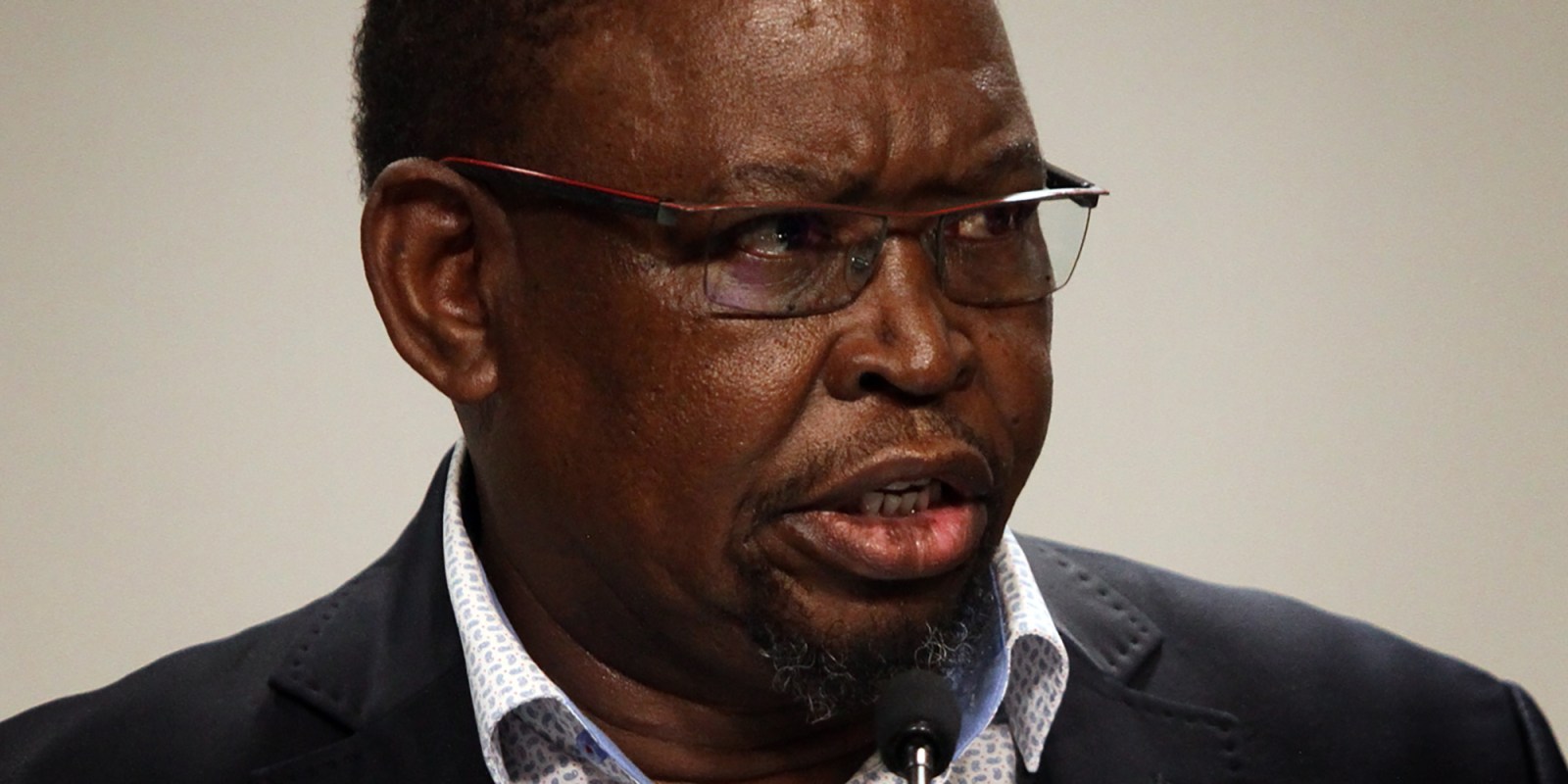 “Mounting debt-service costs are a clear signal that South Africa must stabilise its public finances to redirect spending in favour of social and economic development,” says the statement.

A total of 21 cents in every R1 of collected tax is spent on servicing public debt, which totalled R334.5-billion in 2021 alone. Or, as the MTBPS puts it in one annexure: debt service costs that stood at R57-billion in the 2009/10 financial year rise to R365.8-billion in the 2024/25 financial year “crowding out expenditure on essential services as health, social development and peace and security”.

Or, as Godongwana put it in the traditional pre-MTBPS media briefing: “You can’t increase that fiscal framework… It describes the sustainability framework of the Budget. Between now and February, we can prioritise this and that, shift funds… depending on what Cabinet prioritises.”

Talking debt, he added: “We have to rein in that kind of expenditure. It’s unsustainable.”

In what is in large measure a continuation of the approach by former finance minister Tito Mboweni, Godongwana was resolute – the fiscal framework was “hard”.

It’s a tough line to hold for Godongwana, particularly in the wake of a vocal civil society lobby for a Basic Income Grant as the Covid-19 pandemic and a more than 18-month lockdown is causing widespread socioeconomic devastation, against myriad other expenditure demands from Cabinet colleagues.

That R350 Relief of Social Distress grant is in place until the end of March 2022. What happens after that is a discussion that’s yet to be had, according to the finance minister. “Between now and the end of March 2022, government is going to decide what to do. Not Treasury.”

But the MTBPS does not mince its words on social grant review prospects, even in the February 2022 Budget.

“Any proposal to expand this system should meet the test of sustainability and effectiveness by being fully and appropriately financed to ensure the fiscal balance does not deteriorate. Evaluated against pre-existing priorities of government that remain unfunded, including basic services, education and healthcare.”

Annexure A of the MTBPS puts it bluntly, that “any unfunded expansion of social protection represents a significant risk to the fiscus”.

Given the rising levels of hunger – and joblessness which stands at 44.4% on the broad definition that includes those too discouraged to even try to find work – tough choices lie ahead for the 2022 February Budget.

Godongwana is keeping a tight hold on the purse strings. While the numbers are looking better than a year ago, they are not exactly upbeat.

With tax collection boosted by R120.3-billion – largely from a mining commodities windfall, but also generally improved collections – there is a little room to manoeuvre without raising debt.

So, the R20.5-billion needed to pay South Africa’s 1.3 million public servants their R1,000 monthly recurring cash gratuity is covered. That was the deal struck as the government stuck to its guns, including in court, that it could not pay the 2021 salary increase in the third and final year of that wage agreement.

Public sector wages remain one of the identified risks – and it may just become worse depending on the outcome of the Constitutional Court case, like Eskom with its R401-billion debt, the R40-billion required for the National Health Insurance (NHI) and municipalities, at least 43 of which are in abysmal financial form.

The R10.9-billion allocated to the Presidential Employment Stimulus emerged already in mid-October 2021 when the Presidency announced phase two, centred on its flagship of employing classroom assistants.

A R32.8-billion allocation, which includes R27-billion to extend the R350 Relief of Social Distress grant to March 2022 and R3.9-billion for the South African Special Risk Insurance Association, is also known since it is outlined in the Second Special Appropriation Bill. Parliament is set to approve this bill next week.

All these amounts are part of the overall R77.3-billion in adjusted allocations that really held little surprise aside from the R2.9-billion to Denel for “settling guaranteed debt and interest payments”, according to the Adjusted Estimates of National Expenditure (AENE).

The arms manufacturer has battled to regularly pay full salaries and is currently being restructured. But this support for state-owned entities is a one-off; Godongwana told journalists that performance, efficiency and “bang for your buck” are now key.

About R4-billion has been allocated to various Budget votes throughout the AENE, including R1.3-billion to Defence for its deployment, among other things, and for the Covid-19 lockdown.

But the nub of Thursday’s MTBPS – South Africa’s 25th – comprises structural reforms, hammering home the need for their urgent implementation.

“The durability of the recovery will depend on the implementation of a broad range of structural reforms that inspire confidence and create an enabling environment for accelerating and sustaining economic activity… Reforms that required little budgetary support – including regulatory reforms that enhance competition – are being prioritised.”

None of the measures in the MTBPS is new – from infrastructure investment and boosted renewable energy alongside a just transition from coal to green power, to a reviewed new migration regimen allowing third-party operators onto rail networks, and the much-delayed auction to release sufficient spectrum for better broadband now set down for March 2022.

But much has been a movable target for well over a year, as has the revised migration regimen, the review of which Home Affairs was meant to have completed by now, according to some documents seen by Daily Maverick. But despite this being identified as a key structural reform well over a year ago, like an energised push towards renewable energy and third-party rail operators, has been lagging regardless of rounds of discussions and agreements reached in the National Economic Development and Labour Council (Nedlac).

In Thursday’s media briefing, Godongwana came out to bat for his Cabinet colleagues. Those delays – on the spectrum auction and rail-third party operators, for example – were due to factors beyond ministerial control, such as legislative changes and court challenges.

“My own reading is that there is commitment,” he said.

It’s now up to his Cabinet colleagues to ensure his confidence is not misplaced. DM