Load shedding an ‘immediate threat’ to the 2021 NSC exams, with far-reaching implications for matrics 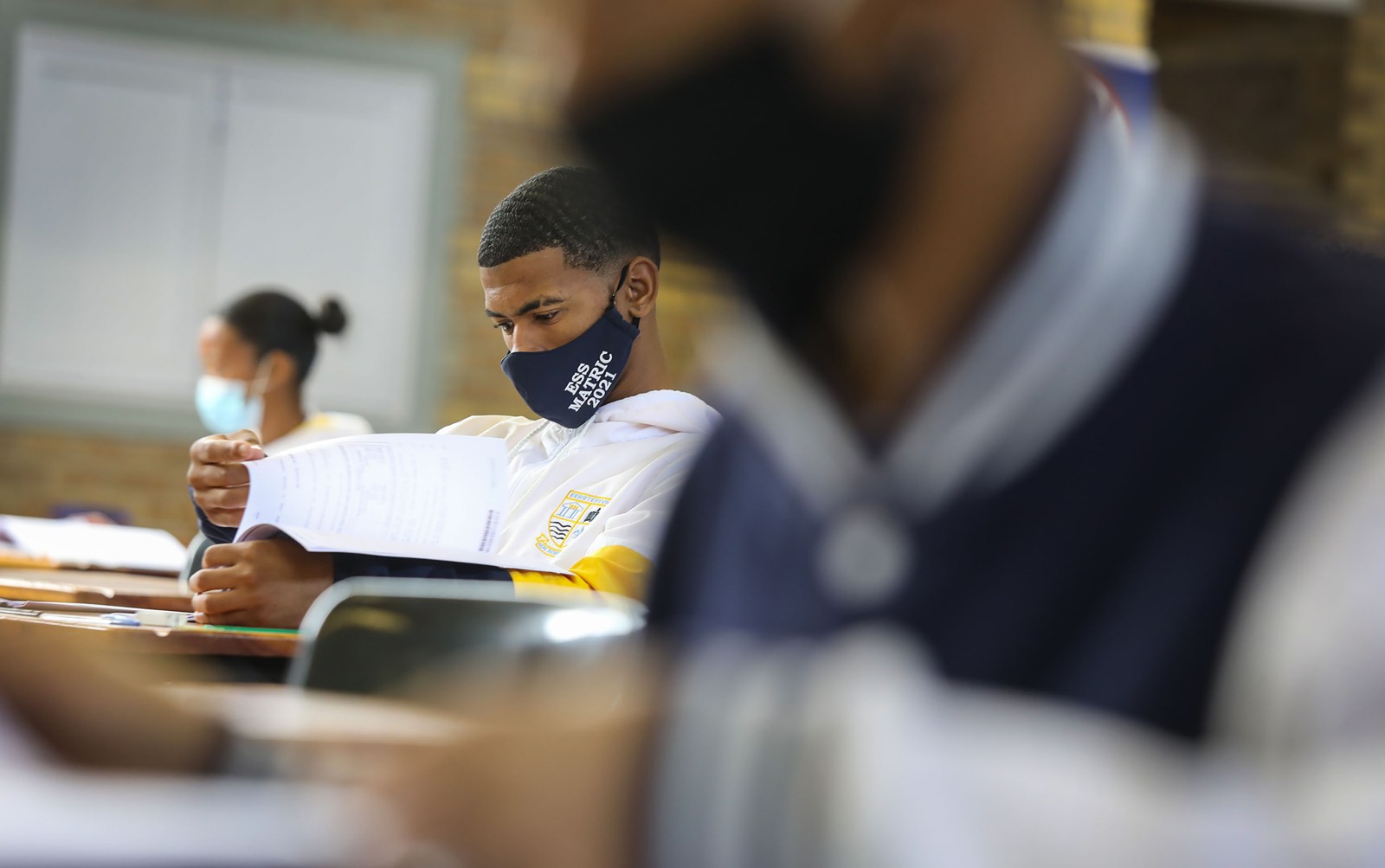 The matric class of 2021 has been hit with a double blow, as Covid-19 disruptions continue to impede their education, and rolling blackouts — courtesy of Eskom — present the additional challenge of studying in the dark. Above, matrics write their final Economics exam at Eerste River Secondary School in Cape Town. (Photo: Shelley Christians)

Parliament has been told about concerns about the effects of load shedding on matrics writing their final examinations.

In a briefing to Parliament’s education committee on Tuesday, both the regulatory body Umalusi and the Department of Basic Education (DBE) signalled their readiness for this year’s matric exams, which began last month. However, concerns were raised about the impact of load shedding on Grade 12 learners.

The National Senior Certificate (NSC) examinations started on Wednesday, 27 October and will conclude on Tuesday, 7 December. During this time, 897,786 learners will sit for their exams at 6,326 public examination centres, 526 independent centres and 326 designated centres, said the DBE.

The class of 2021 has been hit with a double blow, as Covid-19 disruptions continue to impede their education, and rolling blackouts — courtesy of Eskom — present the additional challenge of studying in the dark.

On Monday, the power utility announced that Stage 4 load shedding would continue until Friday, and the situation will remain “volatile” until diesel supplies are replenished.

Read in Daily Maverick: Candle in the wind: Eskom warns of another year of load shedding

She said that “not all schools are built in such a way” that allow for sufficient daylight to illuminate exam venues.

Mhlanga had reiterated that sufficient natural light in exam venues would prevent load shedding from disrupting the exams.

But it is not only the actual exams that are affected, said committee Chairperson Bongiwe Mbinqo-Gigaba. “It also impacts on the learners’ preparations for the examinations.”

ANC MP Tebogo Letsie said load shedding was affecting learners in their exam preparations at home, forcing many to study by candlelight.

“Most parents do not have the means to have generators at home. And therefore it means these children must either study under extremely difficult conditions under candlelight, or those who come from seriously impoverished communities do not have the opportunities to study for exams,” said Letsie.

“We don’t know how many of these matric students would’ve been affected last night as they were preparing for today’s paper.”

Letsie said load shedding may disrupt other aspects of daily life, as water pump stations and transportation are affected. This issue has been raised by trade unions, including Naptosa, which told News24 that the union was concerned about the implications of blackouts on public transport.

During the briefing, Umalusi CEO Mafu Rakometsi said that load shedding has “far-reaching implications” and a “negative psychological impact” on learners when it disrupts their exam preparation.

“[Load shedding] is a big issue. It is depressing when you look at how it affects the opportunities of students and how it negatively affects our education system,” said Rakometsi.

Rakometsi, along with several MPs, called on Eskom to urgently announce how the utility plans to alleviate the impact of load shedding on the education sector.

He said: “I support the idea of a high-powered delegation to Eskom to discuss all the ramifications of this challenge, and I must admit that this challenge does not only affect basic education, it also affects higher education institutions, because the majority of them have also gone online in terms of teaching and learning, and also assessment.”

The DBE agreed that, “Load shedding is an urgent matter that requires an emergency solution.”

Granville Whittle, the department’s acting director-general, said that load shedding is “a matter of grave concern to the DBE”.

“We did identify electricity supply as a risk to the NSC exams, and therefore we’ve had teams of the DBE and Eskom working together over the last few months to try to find some kind of resolution to the challenge that we are facing,” said Whittle.

“Unfortunately, our efforts working with Eskom have not been very successful, and it has compromised the process of the examinations going forward.”

Rufus Poliah, DBE acting deputy director-general, told the committee that the director-general had requested an urgent meeting with the Eskom CEO, which is expected to occur in the next few days.

Counsellor Dr Banetsi Mphunga told Daily Maverick that, “Students are currently overwhelmed because of a lot of things, and now load shedding has added to that strain.

“Load shedding has a big impact on how students prepare for examinations. It affects feelings of anxiety as it disrupts students’ study timetables and planners.

“We are more likely to see an increased number of panic attacks during this exam season… during exams, or post-exam season.” DM