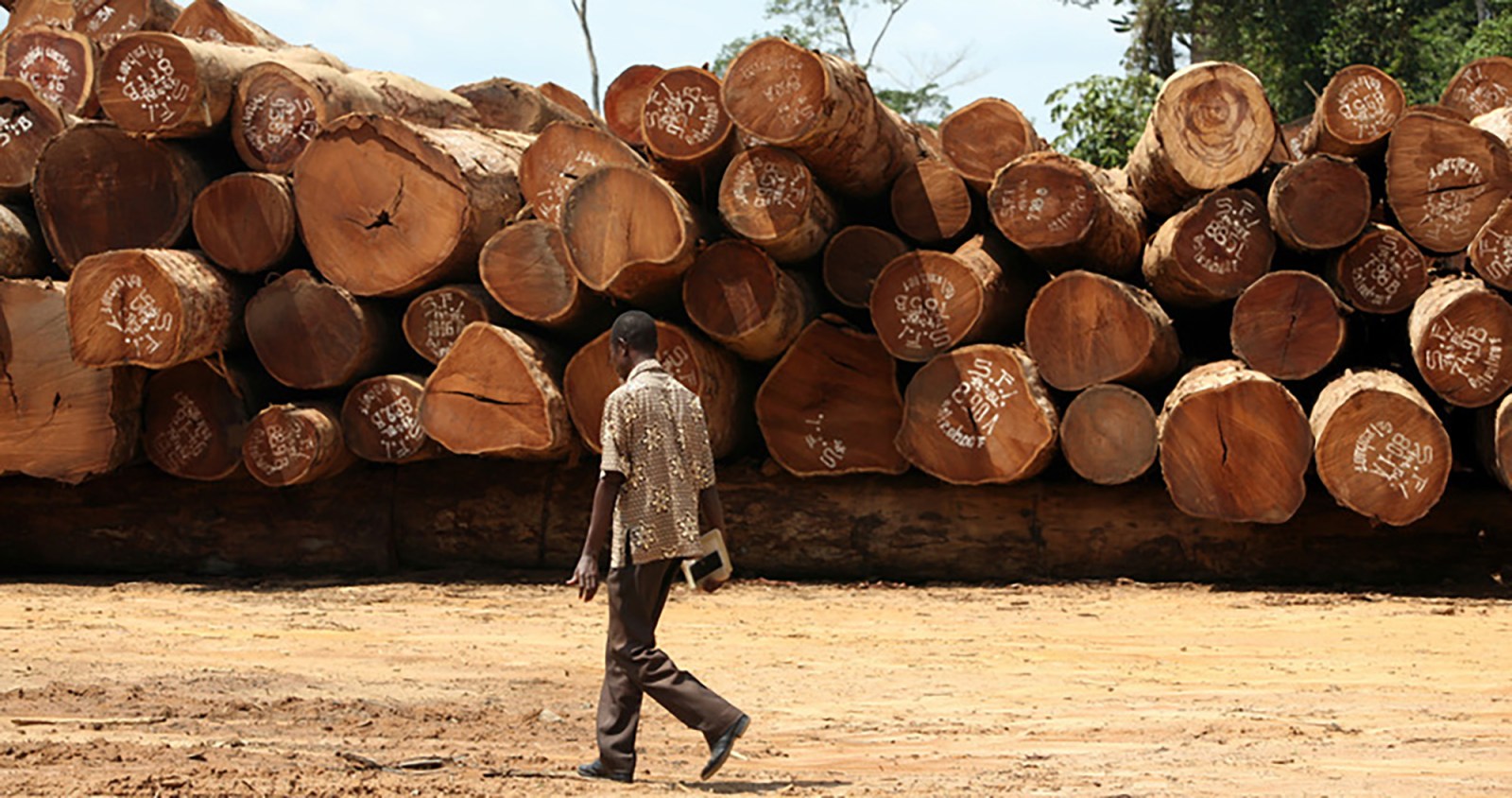 A man walks past a pile of Afrormosia, a highly valued tropical hardwood. Afrormosia is a protected tree species whose international trade is strictly regulated. The logs are waiting to be transported via the Lomami River, a tributary of Congo River, near the village of Yafunga. About 40 million people in the DRC depend on the rainforest for their basic needs, such as medicine, food or shelter. (Photo: Greenpeace)

The Congo Basin is considered as one the world’s lungs because of its ability to absorb large amounts of carbon, which mitigates the effects of the climate crisis in Africa — a continent highly vulnerable to the crisis. Despite this, the Congolese government wants to lift a ban on logging that protects the forest and its communities.

In Democratic Republic of the Congo (DRC), a department is working against efforts to limit global carbon emissions by lifting a longstanding moratorium on the Congo Basin forest — an area integral to the Central African region’s climate. This comes ahead of the UN’s climate crisis COP26 meetings, where world leaders are expected to discuss a progressive way forward to reducing carbon emissions while maintaining a 1.5ºC global temperature goal.

In July, the DRC’s Minister of the Environment and Sustainability, Ève Bazaiba announced that her department will be lifting a moratorium on industrial logging that has been in place since 2002.

Bazaiba and her staff did not respond to questions posed by the Daily Maverick, but she has previously been quoted as saying the moratorium did not stop illegal logging. She added that the ban was prohibiting potential revenue for the central state and that lifting the moratorium would bring about a new plan for the management of the forest.

Bazaiba succeeded Claude Nyamugabo as Minister of the Environment and Sustainability. Nyamugabo was taken to court by activists after questionable forest concessions that violated the moratorium and involved Belgian, Chinese and Congolese companies. DRC President Félix Tshisekedi earlier this month called for an audit of the concessions and all contracts to be suspended pending the investigations.

The concessions Nyamugabo is involved in include forest areas with carbon-rich peat soils — decayed organic material that releases high amounts of carbon when disturbed.

Serge Sabin Ngwato is a Greenpeace DRCforest campaigner, which is part of the 44 Congolese and international organisations calling for the moratorium to remain in place. He told Daily Maverick that if the moratorium was lifted, the impact would be felt most by local and indigenous communities at the forefront of protecting forests in the DRC. He said the expected 20 million hectares earmarked for logging would also have devastating effects on the environment.

“I think the role of the Congo forest is so important for the stabilising of the climate. Lifting the moratorium will increase the climate crisis, not only for the DRC but for the continent and our global planet. It will destroy biodiversity and increase the level of poverty for the indigenous people who are living and are dependent on this forest,” Ngwato said.

The government is seeking $1-billion (R15.25bn) to carry out new forest management plans from the Central African Forest Initiative (CAFI) ahead of COP26, which could be used to garner further climate funding at the conference. The initiative — a coalition of donors between Norway, France, Germany, The Netherlands, South Korea, the European Union and the UK — has so far given about $170-million in forest protection investment to the DRC.

The Congo Basin, considered to be one of the “lungs of the Earth”, is home to the world’s second-largest rainforest after the Amazon. It holds the largest extensive tropical peatlands and is also responsible for reducing 1.5-billion tons of carbon from the atmosphere, which comprises about 4% of the world’s emissions.

The basin spans across six countries; Cameroon, DRC, Republic of the Congo, Equatorial Guinea and Gabon, stretching across 3.7-million square kilometres. It is also home to endangered wildlife, indigenous plant species and a source of food, water and shelter for locals, who are also dependent on the forest for charcoal. Making charcoal, a cheap form of energy, is among the leading causes of deforestation in the region.

In an open letter published on Thursday to entities including CAFI, the Congo Basin Forest Partnership and the European Union, 27 scientists warned that the consequences of the moratorium’s lifting could be catastrophic. The scientists warn that an additional billion tons of carbon would be released into the atmosphere and wildlife species could become extinct.

The Congo Basin is an important source of moisture for the West African region and plays a key role in the region’s precipitation.

Mishandling of the forest not only has negative effects on those living in and around the Congo Basin forests, but also has negative environmental implications that ripple through the continent. As world leaders head to Glasgow, Scotland to convince developed nations that they need climate financing to adapt to the consequences of the climate crisis, lifting a near 20-year moratorium that mitigates climate impact ahead of the talks is not a convincing standpoint.

Although Bazaiba has touted the move as one for the DRC’s economic gain, in their open letter Ngwato and the scientists said the logging industry had not brought about any economic benefits to local and indigenous communities.

“Contrary to frequent claims, the logging industry has too often not brought any social or economic benefits to local people, only the loss of resources they depend on — while serving as a major vector of corruption at all levels of government. It is now widely recognised that forests under the control of indigenous peoples and other local communities can deliver far better environmental, social and economic outcomes,” the scientists wrote.

Communities rely on the forest for resources ranging from food and water to medicinal plants. According to Ngwato, indigenous communities are already battling to lay claim to the land in and around the forest, and lifting the moratorium would only pose a further challenge for them.

Africa is among the most vulnerable regions as far as climate crisis effects are concerned. Strapped for resources it needs to adapt to the consequences of a changing climate, the continent needs every bit of help to mitigate and adapt to the crisis. A lifting of the moratorium strays from the adaptation and mitigation ideals of the Paris Agreement — goals that are key to developing nations securing climate financing and staving off extreme climate crisis consequences.

Lifting the ban on industrial logging would also go against the pledges made by Tshisekedi to limit the country’s emissions by 17% and restore forest cover to 63.5% by 2030 after meeting with US President Joe Biden earlier this year.

“In DRC, a big part of the population [is] living in the rural areas… The only way for them to improve their livelihood and their living conditions is to depend on this forest. This forest is everything to them; this forest is their capital,” Ngwato said. DM/OBP