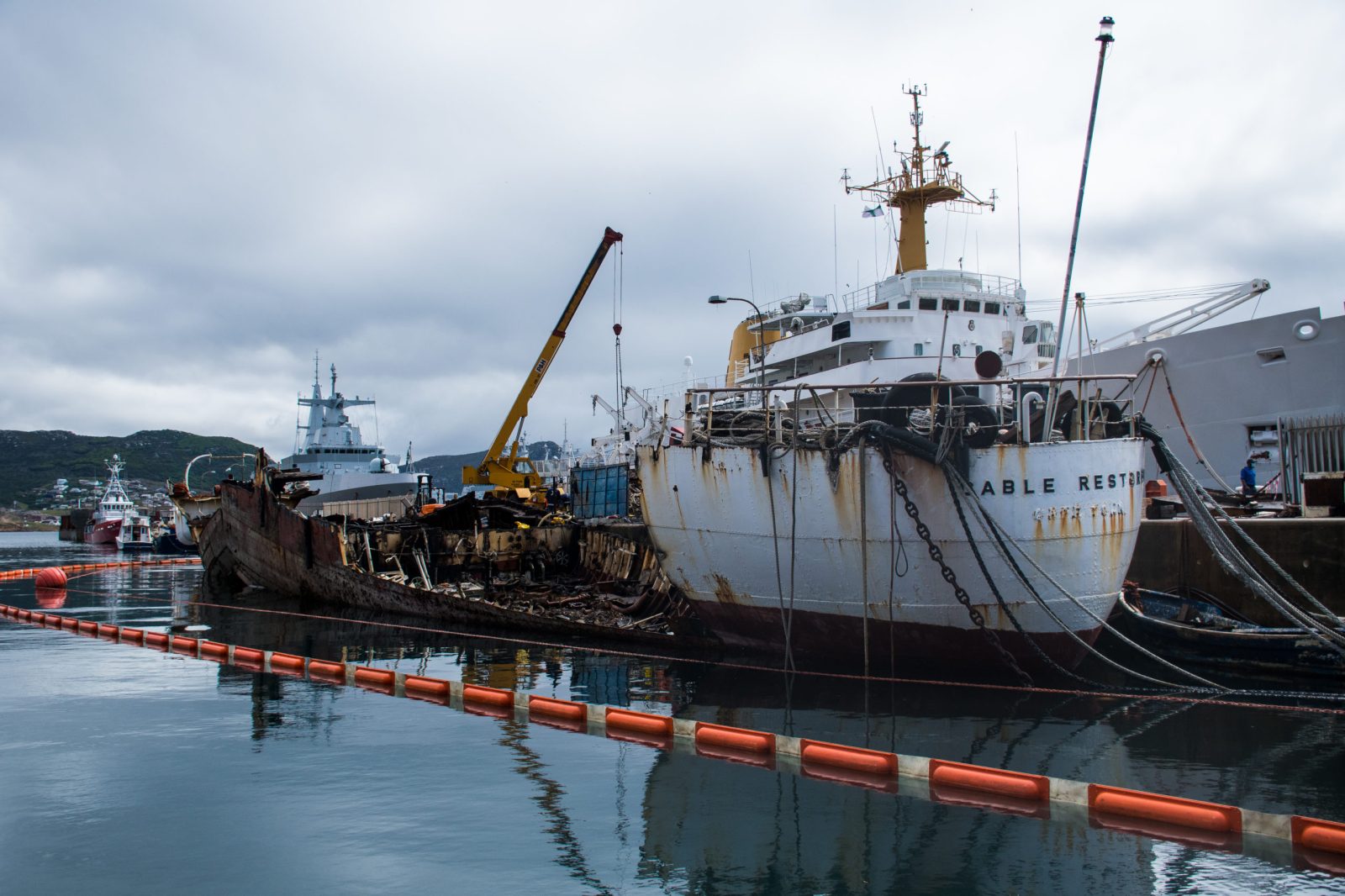 The vessel was in the process of being broken down for scrap when it snapped in two while moored at False Bay Yacht Club.

On Monday 11 October, the shell of the 77-year-old cable ship, the Cable Restorer, broke its back while still afloat at False Bay Yacht Club.

This cable repair ship has a long history — it was launched in 1944 as HMS Bullfrog and was used for harbour defence work during World War 2. Subsequently, the ship, renamed the Cable Restorer in 1961, served multiple commercial companies in the laying and repair of undersea communications cables. The ship was decommissioned in 1993 and handed to Simon’s Town Museum, where she was used a floating restaurant. Not having the funds to maintain the vessel, the board of trustees of the Simon’s Town Museum then disposed of the ship, with Harry Dilley taking ownership.

Dilley, a seasoned mariner and previous mayor of Simon’s Town has been taking care of the vessel and investing funds in its maintenance since 1993. The ship is currently berthed alongside the naval wharf in False Bay Yacht Club where it was being cut down for scrap.

The centre of the ship was cut down to the waterline, but the bow and stern are still intact. Being too heavy on either side, the shell broke in the middle. Around the same time, a red tide washed into the harbour, making it look as though the ship was polluting the waters.

Simon’s Town locals were concerned that the ship was polluting the surrounding harbour and marine environment, with many taking to social media to post pictures and concerns.

Concerns about pollution stemming from the Cable Restorer’s break-up have previously been raised by the Simon’s Town Museum. A letter from the museum, dating back to 2017, requesting that it museum be allowed to dispose the vessel states: “should the ship sink at her moorings (which is not impossible) there would be a major problem with pollution on account of the asbestos, fuel and other substances within her. It would be an extremely hazardous situation for both the public and the environment.”

However, the ‘red tide’ — the reddish water surrounding the ship, as pictured above — which discolours the sea, is not pollution from the ship, but a naturally occurring phenomenon.

Pavs Pillay, marine biologist and WWF Southern African Sustainable Seafood Initiative (Sassi) manager, explained to Our Burning Planet that what’s happening in False Bay is not toxic or a pollutant, just a blooming of microalgae in the water.

“There’s millions upon millions of phytoplankton (microalgae) in the ocean, it’s what gives its red colour.

“They bloom because there’s a nutrient input,” says Pillay. “What that means is … there’s lots of food now available to them, so they use up that food and they reproduce and bloom, like flowers would. If you give a plant a whole lot of food, it will eventually make new leaves and lots of blossoms. The same thing is happening in the ocean. They just happen to bloom red.”

However, the microalgae species that bloomed in Simon’s Town, called Dinoflagellate, is not toxic.

Additionally, City of Cape Town’s coastal manager Gregg Oelofse told Our Burning Planet that the South African Navy, who have been leading the salvage operation of the ship, informed the City and there’s little to no risk of any pollution as almost all of the oil had been removed from the vessel.

Katta Ludynia from the Southern African Foundation for the Conservation of Coastal Birds (Sanccob) said, “It seems like the situation is under control, the Navy has placed booms around the boat in case there is any oil escaping, however, there is only a small amount of oil residuals in the boat as the main part has been pumped off (the initial information about several tons of oil was wrong and has been corrected).”

Oelofse said that after being alerted late in the evening of 11 October that the Cable Restorer broke its back, the City’s coastal management team visited the site at False Bay Yacht Club to monitor the situation.

“We wanted to make sure that there was very limited risk of pollution, and particularly oil because it’s in close proximity to the penguin colony,” said Oelofse.

Oelofse said they were happy with the details the Navy provided regarding the salvage operation.

“So from our side, we are not concerned at the moment that there is any significant risk of oil pollution that would pose any significant threat to the nearby penguin population or Cape cormorants in the area,” said Oelofse.

“So we’ll keep an eye on it, but the right people are dealing with it and we are comfortable that the risk of significant pollution event is in hand.”

Alison Kock from South African National Parks (SANParks) told Our Burning Planet, “We are aware of the issue and are monitoring the situation together with our colleagues from the City and Sanccob and are on standby to respond to any oil affecting seabirds or posing a risk to the African penguin colony. So far the risk is considered low, but we are staying vigilant.”

Nicky Stander, Preparedness and Response Manager for Sanccob, who is also in communication with the Department of Forestry, Fisheries and the Environment’s (DFFE) Oil Pollution Unit said, “the situation is under control. After Monday’s scare, I think the dismantling and scrapping process of the vessel will be monitored extremely closely now so I am not concerned about any further pollution risks to the environment.

“I was also happy with the level of response from government authorities; it was comforting that it was being handled seriously especially with it being in close proximity to an important seabird colony.”

Ludynia added that considering how there isn’t much oil on the vessel, “at this stage, I don’t see any major issues with the further decommissioning of the boat, seeing that there are now so many eyes on it, I am sure they will make sure nothing goes wrong.

“However, it does show how quickly we can be in a situation that requires urgent attention and how high the risks for oil spills are in the Simon’s Town area, with the Navy boatyard, the marina and the amount of boats entering the bay. Also, False Bay is listed as a safe place for vessels in distress, i.e. vessels offshore can enter the bay if in distress or with major storms approaching. That obviously raises the risks of any oil spill in the bay.

“The recent event has been a good warning for everybody and there have been some shortcomings in the contingency plan which need to be dealt with so in that sense, it was a good exercise to highlight some of these shortcomings.”

The South African Navy and Harry Dilley, owner of the vessel, were repeatedly approached for comment but had not responded at the time of publication. DM/OBP