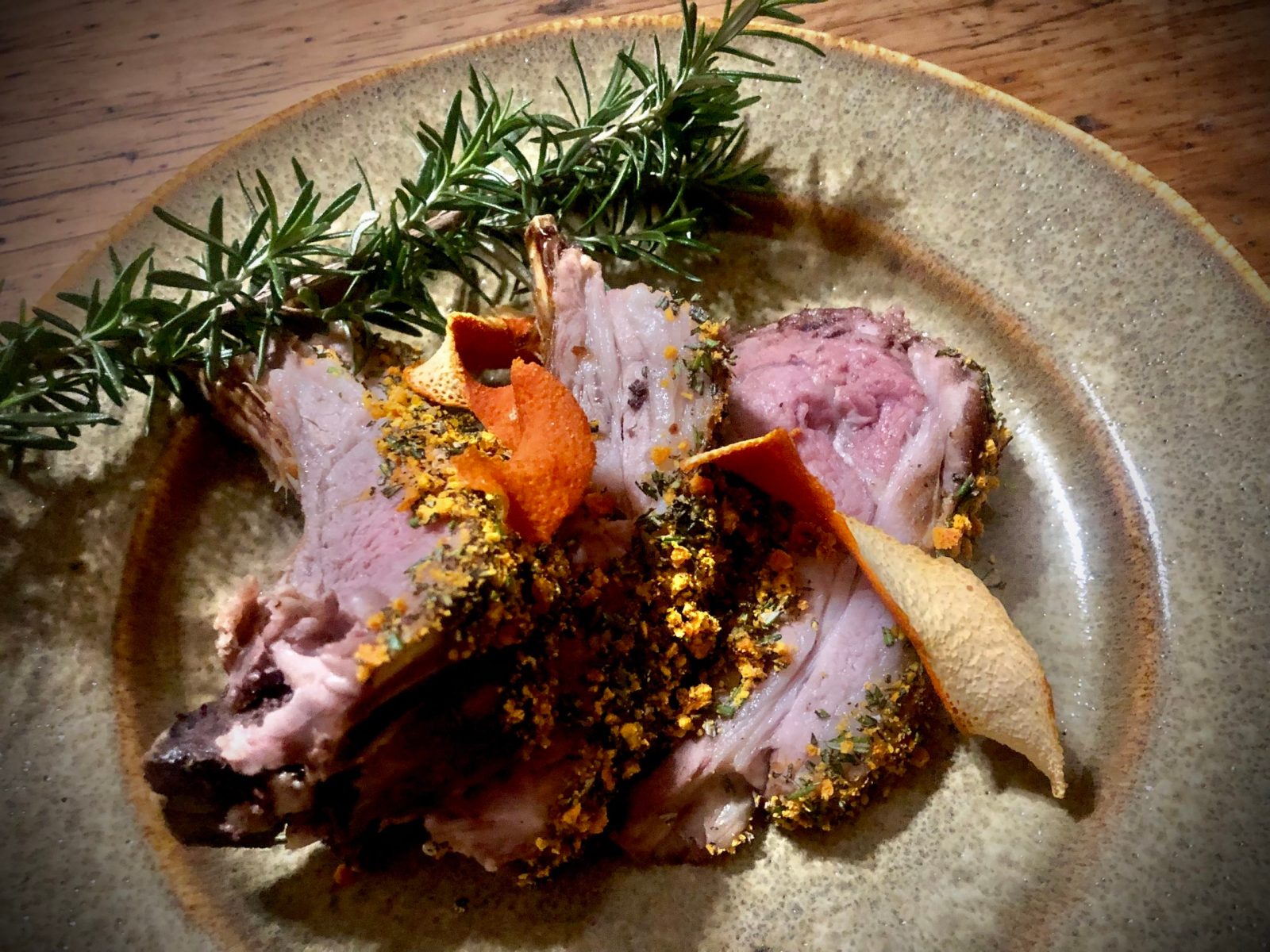 Tony Jackman’s rack of lamb with a dried orange zest and rosemary crust, on a green plate by Mervyn Gers. (Photo: Tony Jackman)

It’s rustic because the racks are not Frenched. More of a homespun Karoo style, really. No foil bandages here; it’s designed to make the meat sing and zing with the tang of dried orange zest and lovely rosemary herbiness.

This rack of lamb was grilled on the braai, first on hot coals, then low and slow. The crust of very finely chopped rosemary needles mixed with dried orange zest, that staple of the old Cape kitchens, is only applied once it’s cooked and about to be served.

A rack of lamb is the most challenging cut of lamb to cook. A minute either way and it’s under- or over-done. I’ve got it wrong many times. But it’s a thrill when you get it right. And right for a rack of lamb must mean pink at the centre and so soft that it virtually melts in the mouth. “Well done” is not for a rack. Rather go for a shank and slow cook it if that’s what you’re after. Leave racks of lamb for the rare or medium rare meat aficionados.

Finishing a rack with a crust, often of herbs and/or breadcrumbs, is a time-honoured method of preparing and serving it. Traditionally it would be served as a tower or crown, the slim ends of the French-trimmed bones pointing upwards in a circle, sometimes with little chefs’ hats as it were. These days chefs in posh restaurants tend not to stack them like that as it has come to be considered old-hat. But they look best that way; what’s the point of changing something only because that’s the way it was done? Change is always refreshing, but I don’t find anything refreshing in that.

Orange zest dust is made by peeling orange (or other citrus such as naartjie or lemon) and drying it in a biltong dryer for a couple of days, or other method, such as hanging it in an airy garage, or drying it in a very low oven for an hour or so. Once dried it can be ground in a blender or grinder or pounded with a mortar and pestle. It should end up as a combination of dust and tiny shards. If it doesn’t crumble perfectly it needs more drying.

You need no fat at all for this other than the fat in the meat. There are few ingredients. That’s the beautiful simplicity of cooking a rack of lamb.

This recipe is best served with this column.

2 racks of lamb, each containing three or four bone sections

3 Tbsp fresh rosemary needles, chopped as finely as you can

In a bakkie or other container, mix chopped rosemary needles with orange zest dust and black pepper. Have this ready for when the racks come off the braai.

Put the grid on a level close to the coals.

Season the racks with salt and pepper.

Braai the racks fat-side down for about 8 minutes, to render the fat and crisp it. Turn (only when the fat side is super crisp and browned) and braai the bone side for 8 minutes.

Raise the grid higher and spread out the coals so they emit less heat, and continue to cook for 15 to 20 minutes or until an inserted skewer draws pink juices, not red. Rather test sooner to be sure the juices don’t run clear, which will mean they are overdone.

Once off the grid, brush the fatty side of the racks with honey mixed with olive oil. This is to give it something for the crumb to stick to.

Dip the fatty edges of the racks in the rosemary-dried zest mixture and serve. DM/TGIFood