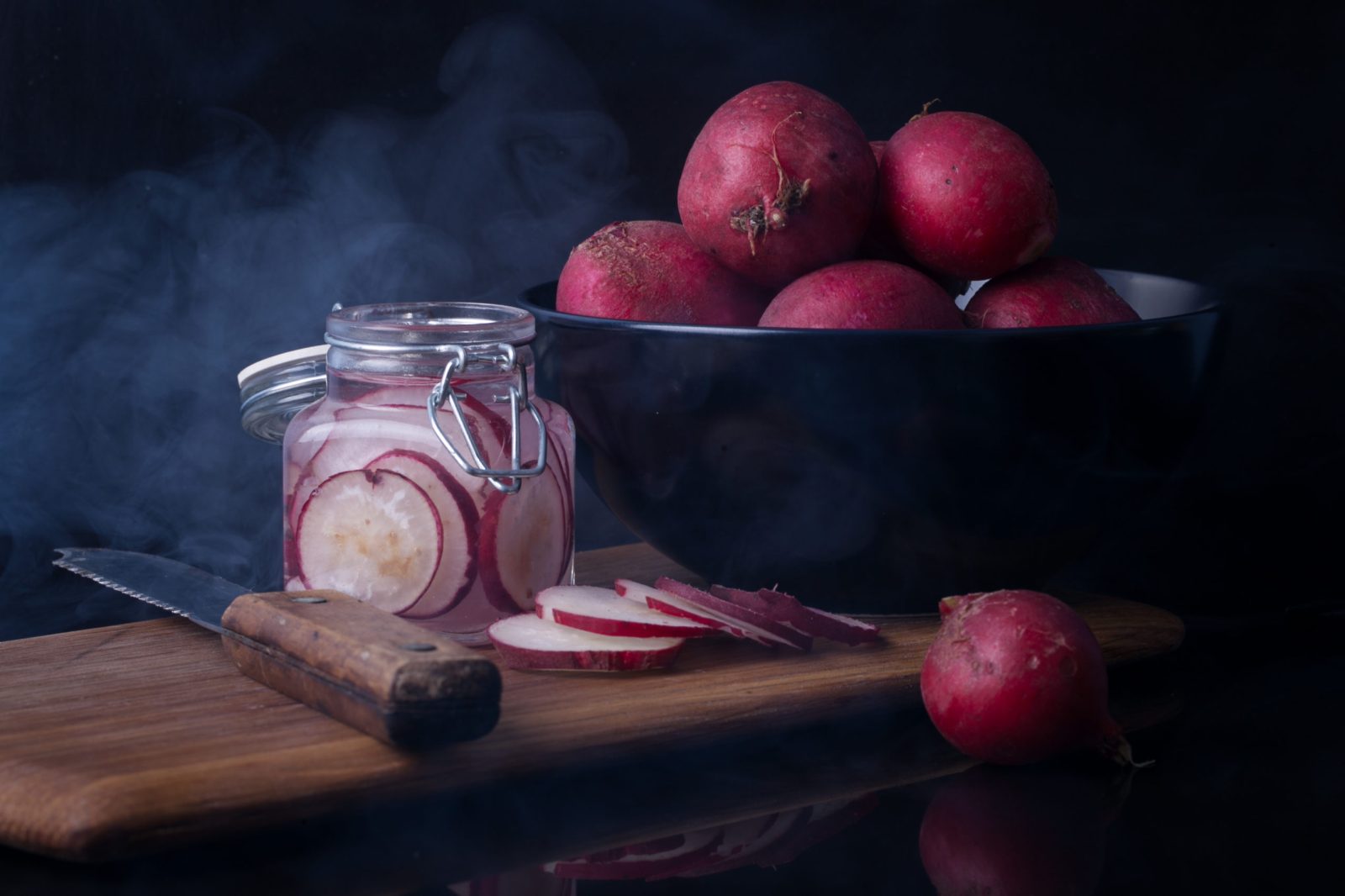 The radish is no longer confined to that red-rimmed sliver of white crunch in a salad. It’s taking centre stage as a hot new side dish.

Radish red. That’s a colour worth having in your palette. It’s an arresting red yet veers towards cerise. And just as we think of them as red and round, their shapes can be oblong or cylindrical, even carrot-like in varieties that taper off at the base of the root. Like carrots, turnips and parsnips, they’re a tap root, but their colour gives them a beauty all their own.

But they’re not all red. In fact, radishes can be red, yellow, purple, pink, green and even black, not to mention the whitish Japanese daikon, with its milder flavour than the crimson balls of crunchy tang. It’s a member of the mustard family.

Until recently I had never thought of radishes outside of a salad or pickle. But writing about food has a way of forcing you to think beyond the obvious, or what’s merely in front of you, and when family arrives with the fattest, juiciest radishes you’ve ever seen, the mind starts getting creative.

What if you roasted them with herbs or spices, or both… how would the flavour change, and the texture… and what would happen to that famous sharpness when you bite into a raw one, and would they retain some crunch? Turns out that, as often happens when heat is applied (think of onions), heating them brings out the sweetness and creates a milder flavour. Nuttier. And perfect for the addition of complementary flavours. Star anise perhaps. Crushed toasted coriander. Toasted cumin. Fresh thyme or rosemary. Salt and pepper of course, and mustard. Which is perfect given that it is a member of the mustard family.

The number of varieties, and their creative and stylish names, might surprise you…

The Cherry Belle. That’s the round red one we know and love and the one that first comes to mind when we think “radish”.

The French Breakfast radish: That’s the elongated red one that looks like a regular round radish that got a bit carried away when it was growing. Sort of stretched. It’s milder than the Cherry Belle. They’re a good variety to roast, so could be used for the recipe on this page.

The Easter Egg: Much like the Cherry Belle in taste and texture, and it can even be bright red too. But there are also white, pink and purple varieties. They’re pleasantly spicy and can be used for roasting.

The Black Spanish: Well, it’s black, obviously. And that makes it a conversation piece if it’s in your salad. And it has a punch, a real bite stronger than its tamer cousins. The flavour varies from fairly mild to super hot, and its black trim contains a white core that makes it pretty sexy on the plate. The skin is somewhat tough compared to other varieties.

The Watermelon: It’s so named because it looks like a miniature watermelon, pale green on the outside and luscious pink within, with cartwheel spoke-like striations. It’s a real beauty with a peppery flavour and milder than the Cherry Belle or Black Spanish. Watermelon radishes are best raw or pickled.

The White Icicle: Whitish, elongated and strong in flavour.

The Sparkler: Also round and red but with a white tip.

White Beauty: White all over, small and juicy.

Fire and Ice: Like the French Breakfast radish, Fire and Ice is elongated and red, but white on the lower half. Delicately flavoured by comparison with pungent varieties.

Daikon Long White: Thick, long, white and mild, the Japanese variety has found fame in the West in recent years. Also from the Orient is the Chinese Green Luobo, an heirloom radish that is lime green all the way. Similarly, the Green Meat, or Misato Green, radish is green inside and out. Another white variety is the mildly flavoured White Globe Hailstone.

But the radish that wins the size competition hands down is the Sekurajima Mammoth, a giant that grows up to 45kg. That’s a lot of pickles.

If you can nab some of those gorgeous Black Spanish radishes, try roasting them with olive oil and chilli, or make miso-roasted black radishes, or you might find black radish chips as a tapas choice. There’s a popular Moroccan radish and carrot salad, with chickpeas, pistachios, mint and ras-el-hanout, that prince of spice mixes. Radishes are also a popular ingredient for a fattoush, a Lebanese bread salad.

Whether your radishes are red, black, yellow or white, or for that matter pink or purple, roast them in butter with star anise and thyme and then incorporate them into mashed potato, well seasoned, especially with salt, for a side dish that will have your guests asking what the secret to your mashed potatoes is.

This week, I dove right into the idea of cooking with radishes, for the first time ever. Olive oil, fresh thyme, toasted crushed coriander, salt and pepper. Everyone loved it. (This column is garnished with this recipe.) DM/TGIFood