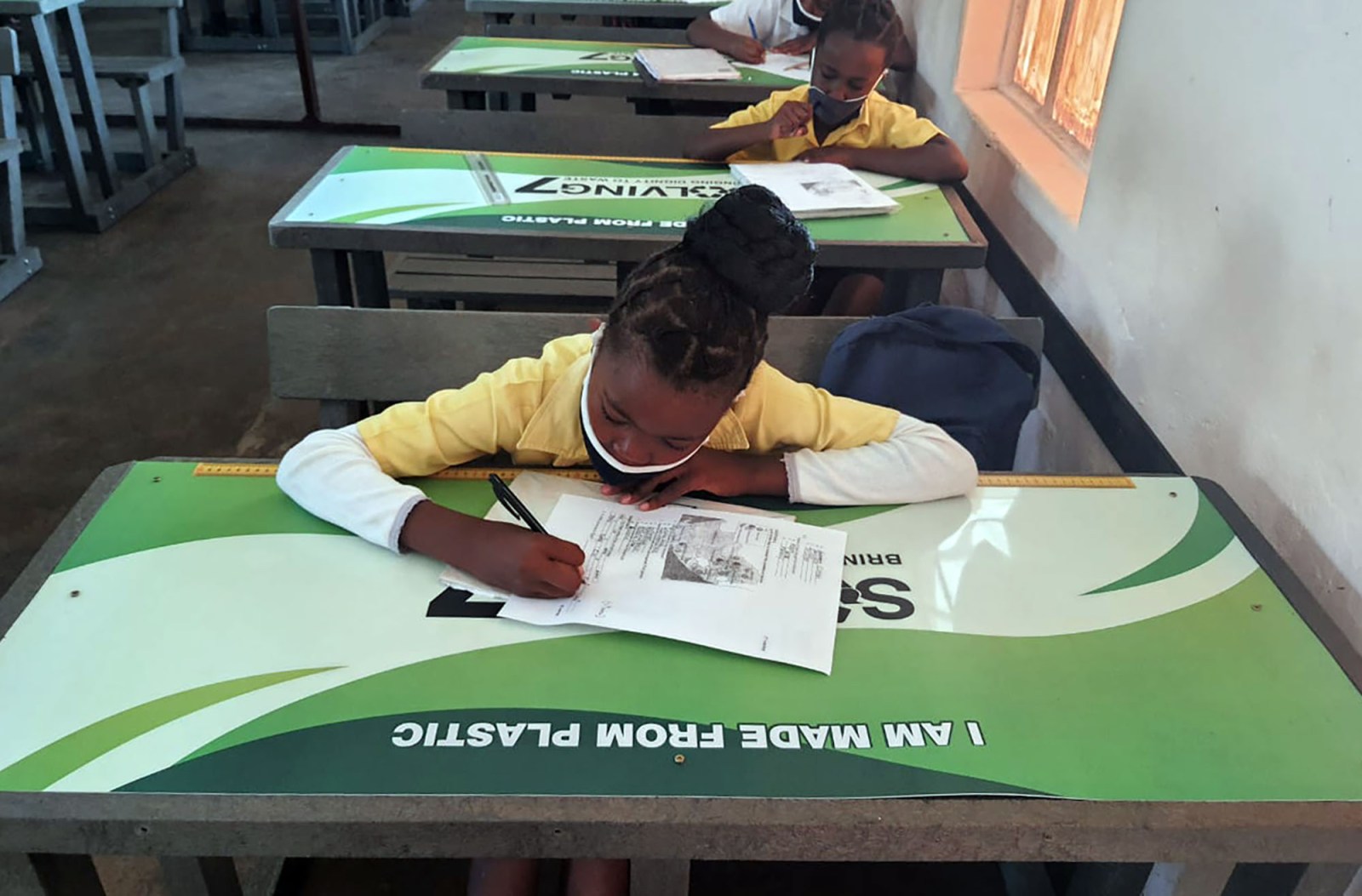 Solving 7 is finding a way to make use of existing plastic waste, turning it into durable desks for learners across the country. (Photo: Amore Bardenhorst)

When we think of plastic and paper products, it seems as though anything goes where recycling is concerned. A female-powered organisation, however, is trying to change this narrative. It upcycles non-recyclable plastic materials to create school desks, which it then donates.

The non-profit organisation (NPO) Solving 7 has been repurposing a plastic labelled number 7, which consists of packaging of products such as chips, biscuits, soup packets and sauce sachets. These often consist of multilayered materials that take immense effort to pick apart to recycle the salvageable parts.

Co-founder of Solving 7 Sophia Ladha told DM168 that number 7 plastics (referred to as post-consumer single-use plastic) are designed to extend the shelf life of products.

With no recyclable solution in sight, the materials end up in landfills and oceans, which has a devastating impact on the environment and ecosystems.

When Ladha and her co-founder, Nabila Wissanji, realised that waste pickers were leaving behind number 7 materials, they investigated to find out the reason.

“Research indicated that there was no recycling solution for the post-consumer ‘single use’ flexible plastic film, including multi-layered and metallised film waste, in Africa and, as such, informal waste collectors would not be paid for collecting these plastics and delivering them to recycling companies,” said Ladha.

“RWPA has developed a unique green technology that converts dirty post-consumer ‘single use’ flexible plastic film into useful raw materials, without using water in the process or impacting the environment negatively. These recycled raw materials are then converted into ‘planks’, and the planks are assembled into a ‘green desk,’” said Ladha.

The amount of plastic produced by SA and globally necessitates efforts such as Solving 7 to curb plastic waste leaking into the environment and oceans. SA produces 2.3 million tonnes of plastic a year, with 14% of local and imported plastic being recycled.

Despite the staggering amount, the Department of Forestry, Fisheries and the Environment has opened applications to import more plastic because of a shortage of certain plastics. Plastic pollution is expected to triple to 29 million tonnes, which will result in 600 million tonnes in the oceans by 2040, causing the death of more than 100,000 marine mammals.

The organisation helps limit the increase in plastic waste and leakage by collecting number 7 plastic through waste pickers and buy-back centres. Once it has been collected, it’s taken to RWPA to be processed into raw materials that can be shaped into planks that are assembled into green desks and donated to schools through the NPO, Wild Trust.

Modimolle Primary School Grade 7 learners have benefited from the green desks, having received 25 combo desks. The principal of the Limpopo school, Amore Badenhorst, said the learners loved the desks, which she described as incredibly strong.

“As we are teaching our children to recycle and reuse products, it’s important for them to see what happens to these items, and it motivates our community to recycle as they can now see the products of recycling. Our stakeholders are very impressed with these tables as they are truly one of a kind,” said Badenhorst.

The CEO of RWPA, Ghalib Janmohamed, said each desk uses about 30,000 post-consumer crisp packets and weighs about 60kg. The organisation had recycled more than 400 tons of number 7 plastic materials.

Upcycling is considered, in some advocacy spaces, to be a “false solution” to the plastic waste problem. The reuse of the waste can encourage the industry to produce more plastic as upcycling takes care of the waste. Other reasons include concerns over hazardous chemicals in plastic that can leach from the new products when exposed to heat, UV rays and/or water, while the new products will no longer be recyclable. There are also concerns about upcycled items such as eco-bricks being a fire hazard.

“Unfortunately, even the most modern waste management systems cannot cope with the exponential rise of plastic production and waste… Any responses that prioritise end-of-pipe technology over addressing the root cause will not only be futile but also increase emissions of toxic and climate pollutants to the environment,” said the Global Alliance for Incinerator Alternatives in a study.

A study commissioned by the WWF has shown that the societal cost of plastic pollution, in 2019 alone, amounted to $3.7-trillion. Should the industry continue to produce plastic at its current rate, the price could rise to $7.7-trillion by 2040. DM168