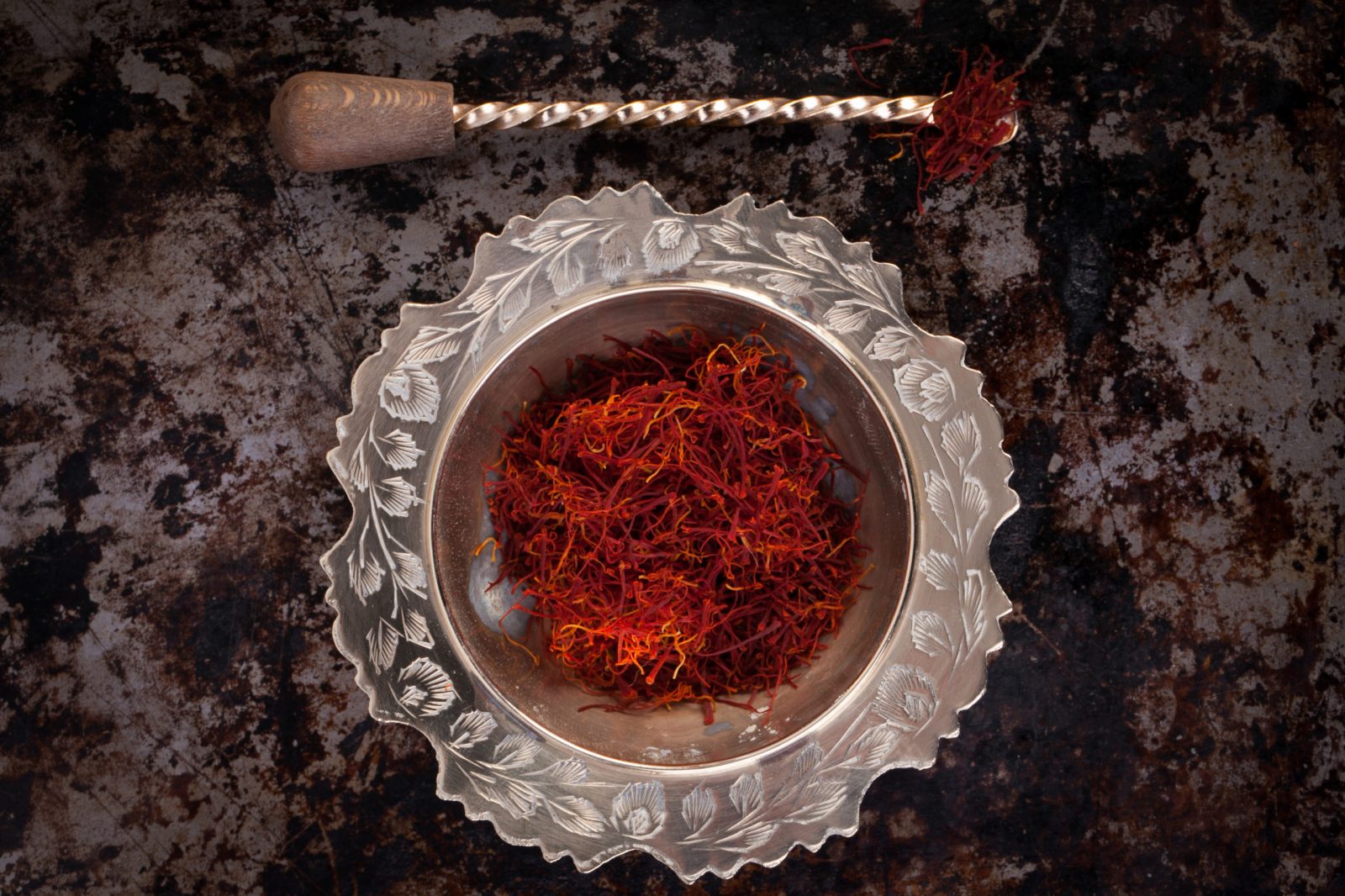 A thousand crocus flowers yield just one kilogram of saffron threads. It’s not called red gold for nothing.

When life begins to fade and death seems close; when the youthful blush on the fair maiden’s cheek has drifted away as if forgotten or spurned by a once-besotted lover; when the flower has lost its lustrous bloom and withered, that is when to pluck the stigma from the crocus. That is when the remnants of a dying flower become the most mystical and precious of all spices. Saffron.

This column accompanies this recipe for saffron rice.

The great C Louis Leipoldt’s succinct description of saffron is as true today as when he wrote it nigh on a century ago: “Saffron has always been the most expensive spice on the market and has, in consequence, been so much adulterated that most cooks have managed to do without it. It is, however, an extremely valuable spice, with a distinctive, individual flavour – slightly bitter, moderately pungent, and exceedingly penetrating – so that a very little goes a very long way in cookery. It readily gives up its bright yellow-red colouring matter, which is soluble in water and wine, and can be used to colour soups and sweet dishes. Real saffron is the dried stigma of the crocus, which is carefully plucked out when the flower is beginning to fade, spread on muslin and sun-dried. When dry, only the finest red stigmas are collected and sold by the ounce or gram.”

We know that saffron comes at an eye-widening price. I paid R80 for 0.5 g last week. And I needed more than that, so that we could do a decent job of the photos for this story, some of the finest work yet by my colleague and friend Louis Pieterse.

In the picture, then, is about R350 worth of red gold. And it’s not called that for nothing. It stands to reason that we want our money’s worth. Which means we want it to be the real deal. But is it?

As with anything in this age of liars and charlatans, of the genuine and the fake, there are imposters placed there to trick us into spending a fortune on something that isn’t even the real thing. Fortunately, it’s not difficult to tell the difference between real saffron and a sham placed there by a mountebank. There several ways to assess it:

Saffron threads are not straight or even. One end is slightly tubular. If it’s not, it’s fake.

Drop a couple of strands in a little tepid water. Twenty minutes later, the water should be turning that familiar saffron-yellow, but the strands themselves should still have the fullness of their brownish red hue, and that is no less familiar to any eye that has seen and admired saffron. It’s as if no colour has left them at all, yet there it is, the water has changed colour while seemingly not draining the stigmas of their hue at all. If the water has not changed colour at all, it’s most likely not saffron. By the same token, if immersion in tepid water immediately turns the water red, that’s another red flag and means it comes from a dye other than saffron. It’s a slow transformation.

Crumble a couple of threads (not too many) between your fingers. They should turn virtually to dust very easily. (Do this over a container so you don’t lose what you’ve crumbled.) More important is that your fingers should turn that distinctive yellowish-red that is so characteristic of saffron. It’s not for nothing that in India saffron is used as a fabric dye.

If you’ve ever eaten a dish flavoured with saffron, you should be very familiar with its aroma and taste. One sniff and that smell should be right there, no doubt whatsoever. Only saffron smells quite like that, hard to define as the scent is. It’s earthy, slightly sweet, redolent of mild tobacco, honeyed… some say it’s redolent of hay or grass, in the way that a sauvignon blanc is grassy.

It’s a really cheap version and you think, wow, I’m really scoring here! No you’re not. Saffron is very costly. Period. If it’s cheap, there’ll be a reason for it, and that reason can only be either a) that it’s not real saffron, or b) they stole it.

The stigmas of 750,000 dying crocus flowers will give you less than 500 g of saffron, and the window of opportunity for the harvest is tiny, only two weeks a year. In India, the lavender-hued blossoms are plucked at dawn, before the sun can wilt them, after which the tiny threads are picked and dried. In Spain, wrote Monisha Bharadwaj in her book The Indian Pantry (Human & Rousseau), the stigmas are “toasted over charcoal”.

Saffron can be the hero of many a dish, even if it is also found lurking in the shadows of many recipes that also contain other, arguably lesser, spices. Saffron rice will hold its own in the company of even a strongly flavoured mutton curry, just as it will when served with curried seafood. It can transform an ordinary curry meal into something divine and is at the very heart of a biryani.

One of my favourite desserts is shrikhand, for which yoghurt is strained overnight in muslin and then whipped with saffron milk and sugar until thickened. It’s sprinkled with ground nutmeg and cardamom, chopped pistachios and raisins and chilled. A saffron ice cream is the perfect palate salve at the end of a curry dinner. And you can add some to a sago or tapioca pudding to switch up a simple weeknight pudding into something more refined.

And again, always the game of what does it taste and smell like… but saffron is an emperor among flavours and colours. Saffron leads the way, never follows; it commands, does not bend to others or seek favour or approval. Red + gold: sold. DM/TGIFood