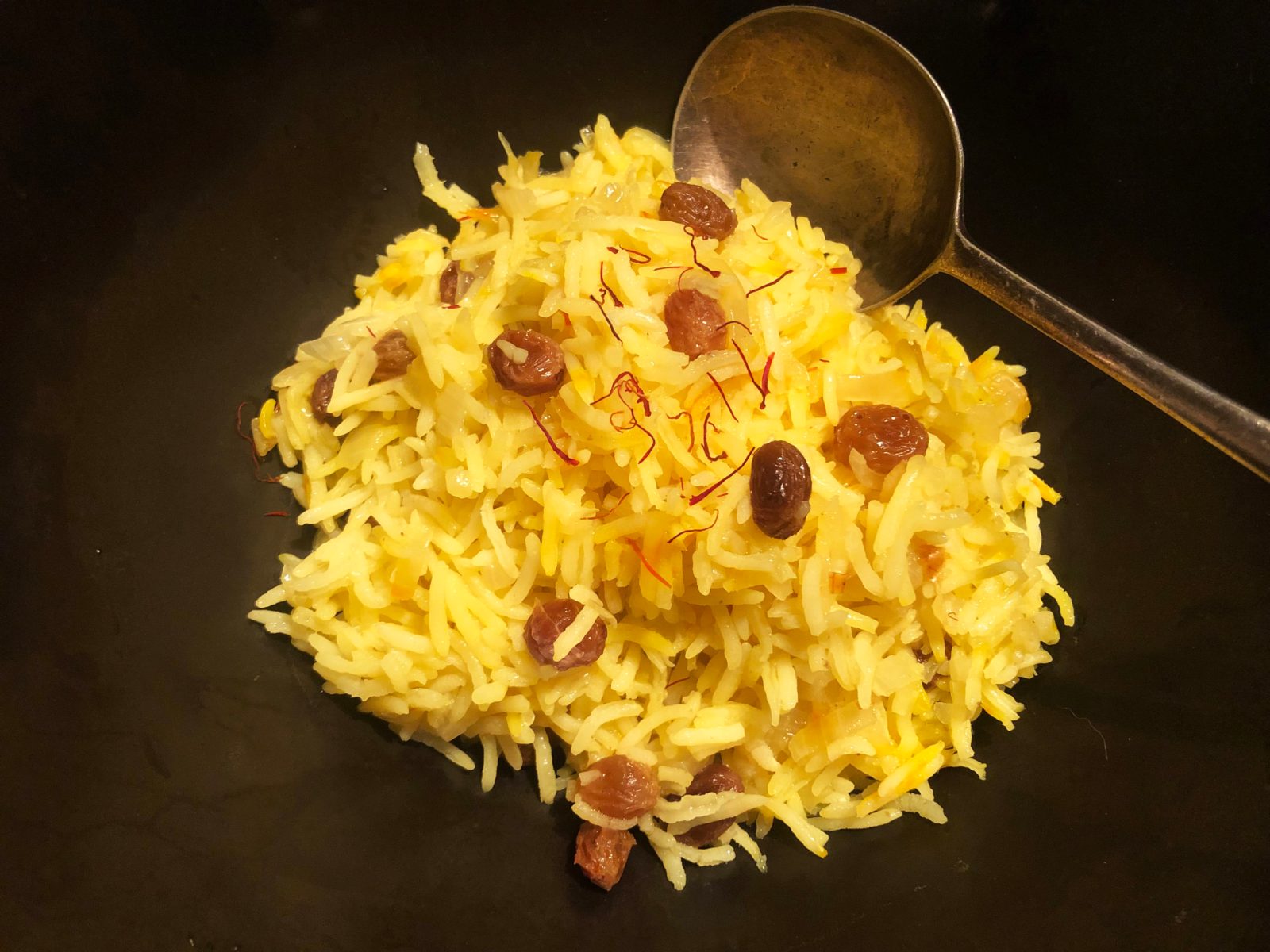 Yellow rice, geelrys, begrafnisrys. Add ground turmeric or a few strands of saffron and white rice turns yellow. Studded with raisins, sweetened with a little sugar, and spiced, it’s a side dish we don’t see nearly enough of.

Rice is and always has been an important and traditional component of many main meals for many South Africans. From the Cape Malay tradition to the curries of KwaZulu-Natal to the ubiquitous “bord kos” of the boerekos tradition, rice is not merely anticipated; it is expected. Usually it’s an afterthought, but when it is enhanced with both colour and flavour to become “yellow rice” it enters a new realm. Its most exotic name, begrafnisrys (funeral rice) evokes wagons trundling from farmlands into town for a funeral, where the yellow rice was a requisite dish. Begrafnisrys was traditionally flavoured and coloured with turmeric, rarely saffron. The name has stuck and today is simply used for the ubiquitous dish.

Louis Leipoldt wrote that rice (which he always refers to as “a cereal”) “was indisputably the chief vegetable in the old Cape household, and is today still regarded as absolutely indispensable at every well-cooked dinner”. His “today” was of course 80 years and more ago.

He argued that all good rice was made the South African Indian way, and distinguished clearly between dry and wet rice, referring to the latter as “pap rys” and observing that “it was regarded as distinctly bad taste to serve one kind (of rice) with a dish that tradition prescribed should be accompanied by the other kind”.

“Rice was always served as a vegetable; a rice pudding was quite unknown, and the first recipe for it appears late and is obviously taken from a European cookery book – although it has been much modified so that, if its directions are followed, what comes out is not the ordinary insipid and gruel-like sweet of the nursery, but a glorified sweet pilaf of preserved peel, raisins, dates and nuts, cooked in plenty of butter and a rich custard cream”. In that single sentence, Leipoldt describes a rice dish to trounce nearly all others.

He goes on to remark that rice was rarely used for sophisticated dinners, “though it was much used for soups and sometimes made into a bredie”, adding: “The recipes for chicken, ham, mutton and fish pilafs do not differ greatly from those that were familiar to Occidental cooks, except that they all prescribe a variety of spices and prolonged cooking; nearly every one can be paralleled by some particular Italian risotto.”

Leipoldt refers to these rice concoctions (pilaf and risotto) as “combined dishes” and observes that “the most popular of these combined dishes is yellow rice (geelrys)”.

In the old Cape and even today, the flavouring and colouring in traditional yellow rice comes chiefly from turmeric, no doubt because saffron, which turns the rice yellow equally well, is so expensive. Of course, they also both give the rice a very different flavour and even texture, because turmeric has a way of altering the texture of the rice. I like that silken, almost powdery quality that rice gets from turmeric; it’s very much a part of the texture of a good mutton or chicken akhni.

Leipoldt describes the old Cape yellow rice recipe: “Take dry boiled rice, put it in a saucepan with butter, turmeric powder, a small piece of green ginger, a tablespoonful of moist brown sugar, a teaspoon of salt and a little powdered chilli; add a cupful of stoned raisins, moisten with bouillon, and allow to simmer. One old recipe substitutes saffron for the turmeric powder. The rice should be wet when dished up, with all the ingredients well mixed, and it should not be too sweet.”

Being Leipoldt and the old Cape cuisine being as strange as it often was, he then goes on to describe two other “combined” rice recipes: quince rice (containing pounded cheese, chilli, onion juice and “a glass of sherry”; he pretty much added a glass of wine of some sort to everything), and “rice with penguin eggs”.

For this, “make a strong meat gravy, mix with a glass of sherry (see?) and beat into it a teaspoonful of sour fruit jelly (kei-apple jelly). Let it boil up and pour through a sieve. Put a layer of dry boiled rice in a pie dish and place on it two hard boiled penguin eggs cut into quarters or slices; fill up with rice; pour over the sauce, bake for a few minutes in the oven, and serve”. Don’t forget to pop some penguin eggs into your trolley next time you shop.

She also has a recipe for dhal rice, specifying use of “yellow split peas”, prawn rice (very much a pilaf of the Leipoldt order, with onion, garlic, cinnamon, cardamom, tomato, chilli, green pepper and of course shelled and deveined prawns), and gesmoorde rys (which also has onion, cinnamon and cardamom as well as cloves).

In Vida Heard and Lesley Faull’s beautiful and rare Cookery in Southern Africa, published in 1970 (I have a copy thanks to my friend and colleague Janet Heard, Vida’s granddaughter), their recipe for yellow rice contains “half a cup of yellow sugar”, a cinnamon stick, just 1 teaspoon of ground turmeric, and a cup of raisins. They follow this with their recipe for “geelrys”, for which they swap the turmeric for saffron, and yellow sugar for brown. The former, they say, should be served with “all roasted meats, chicken and some curry dishes”, while the latter is fit for “any kind of roast meat or poultry”.

My recipe uses saffron, because I wrote it for a column on saffron for DM168, our print edition, and my version needed to celebrate the prized stigma of the crocus. But you can use turmeric if you prefer; I’d suggest a heaped teaspoon to replace the saffron.

I have not attempted to be traditional in my recipe. If that is what you want, see Leipoldt above (with or without the glass of sherry). Mine contains onion, I used golden sultanas, not raisins as such, I excluded cinnamon, and I used ghee rather than butter. I don’t think cinnamon is essential to its flavour profile, preferring the cardamom to be accentuated and there to be less masking of the saffron itself. I also left out the sugar, as the sultanas lend it a touch of sweetness. Finally, long grain rice is traditional, but basmati always wins in my book. And no sherry.

This recipe pairs well with this column.

A few grindings of salt

For my method, you need two pots: one to cook the rice, the other to sauté the onion with sultanas and spices before adding the rice.

Wash the rice in cold water, massaging the grains with your hands, repeating three more times. Drain each time.

Melt the ghee and add the onion, cardamom pods, and sultanas. Sauté for 3 or 4 minutes on a low heat, stirring.

Crumble in the saffron and add water to cover plus 2 cm of water above the top of the rice. Add a little salt. Give it a stir.

Bring to the boil, then cover with foil and a tight fitting lid.

Turn off the heat and leave it to steam for half an hour. If there’s still some liquid in the pot, heat again for 10 seconds and leave to steam longer. DM/TGIFood