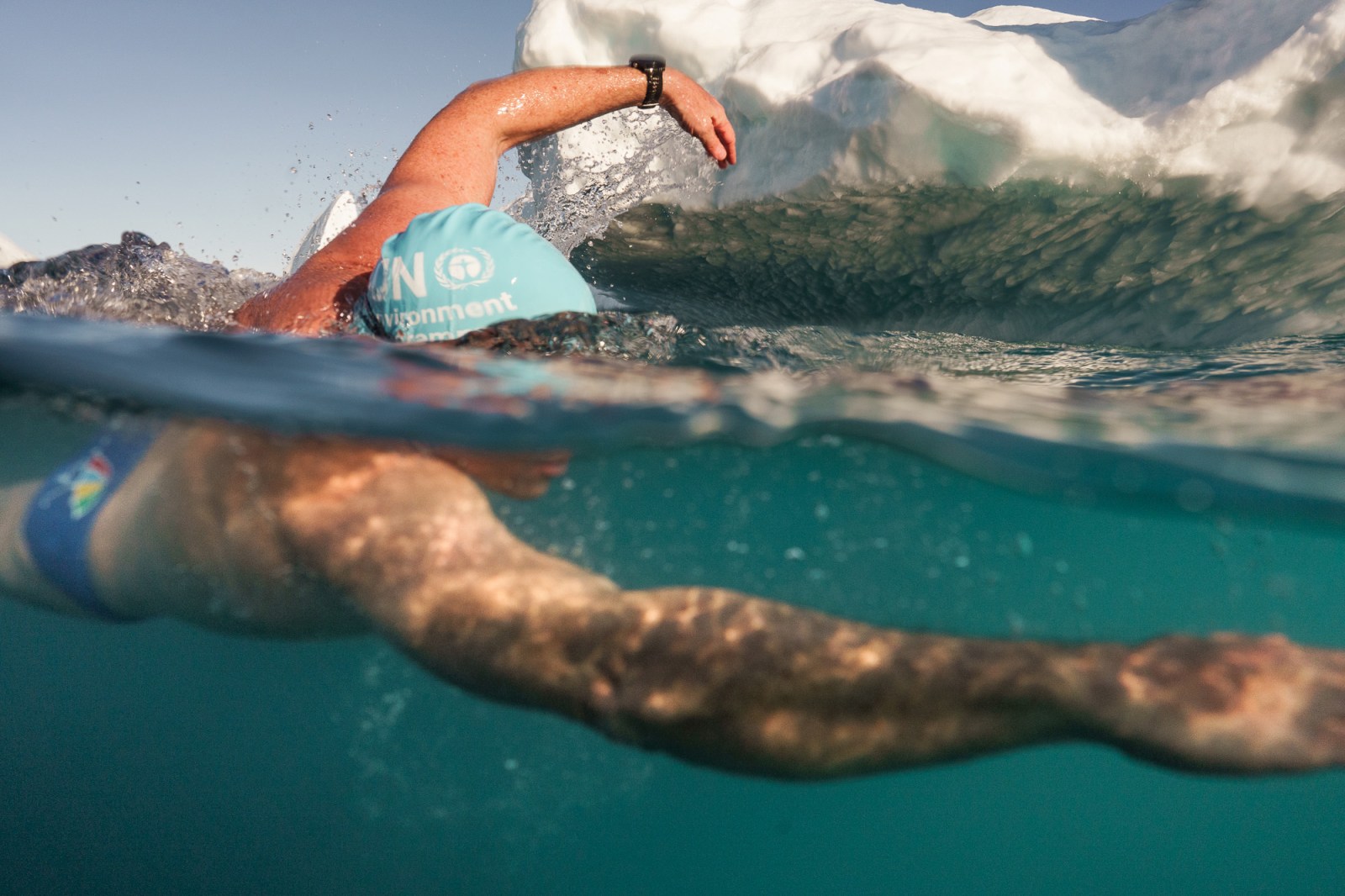 Fresh from a career-defining, 12-day, 7.8km swim across the face of the world’s fastest-moving glacier in Greenland, the UN Patron of the Oceans is now set to tackle a much tougher challenge — convincing world leaders at the UN Climate Change Conference next month that what he just saw merits urgent attention.

Lewis Pugh swam across the face of the Ilulissat Glacier in western Greenland above the Arctic Circle. This 65km-long, 2km-thick glacier is believed to be the fastest retreating glacier in the northern hemisphere. Between 2000 and 2010, the glacier retreated nearly 14.5km, more than in the past century.

He swam twice each day in 10-minute sessions in temperatures ranging from three to zero degrees. He would get back onto the boat after each swim, dry off and dive into a sleeping bag with three hot water bottles and a cup of hot chocolate, for an hour, then move to his cabin for another two hours, in between swims.

After completing his mission Pugh said he felt, “relieved, exhausted, cold. And worried. The melting we have seen on the Greenland ice sheet will impact all of us. We have a very small window to act. We now need all hands on deck to solve the climate crisis.”

After he completed the swim, Pugh received a congratulatory WhatsApp from World Open Water Swimming Association founder Steve Munatones: “You have proven yourself enough in the cold … You don’t need one more swim to prove your point. Go into the next phase of your UN Patron of the Oceans career.”

That next phase is Pugh’s presence at the upcoming climate change conference — COP26 — in Glasgow from November 01 to 12. He has been appointed COP Advocate by the UK government, along with Sir David Attenborough, to tell the international media and delegates exactly what he has seen, as well as to meet political leaders, and to give talks, including on 5 November’s Oceans segment.

More than 30,000 delegates from 200 countries are due to attend the conference, and member states are expected to submit their finalised action plans for cutting emissions, according to the 2015 Paris Agreement.

Pugh says that the actual work in preparing more ambitious commitments will be happening now, in the run-up to COP26, at the UNGA (UN General Assembly week). “Everything depends on the next 40 days,” he adds.

Major stumbling blocks include controversy over rules for carbon market mechanisms that allow countries to offset their emissions by purchasing carbon credits (emissions reductions) from other countries, as well as the economic impact of restructuring economies.

Target after target has been missed or ignored, for example, the 2009 pledge by richer countries to raise $100-billion per year by 2020 to help developing countries reduce emissions and adapt to climate change.

The British newspaper The Guardian reported recently that for the first time in recorded history, rain fell on the highest point of the Greenland ice sheet last month. “Rain in a place historically defined by bitter cold portends a future that will alter coastlines around the world, and drown entire cities,” the article stated. In addition, summertime meltwater rivers now flow over the ice sheet where, 150 years ago, no sign of surface water was visible, the article stated.

And Pugh was there to confirm that. “One morning at about 4am, I looked out the window, and there was a motorway of ice rushing past, I have never seen anything like it. Within three hours there were thousands of icebergs stretching 10km out to sea.”

“We have all seen images of fires in Greece and Australia, or floods in Germany and Belgium. We’ve all heard about the Great Barrier Reef bleaching. And we have all seen footage of glaciers calving — but what I saw at Ilulissat is terrifying. That is where you see what is coming.

“At the mouth of that 60km-long fjord, the sea bed is very shallow. I saw an iceberg one kilometre tall jammed there. Behind it was a 60-km procession of smaller icebergs pushing their way out into the sea.”

He says his battle is only just beginning and urged the youth to hold their parents, their schoolteachers, their community leaders, their national leaders to account.

At COP21 in 2015, countries signed the legally binding Paris Agreement, agreeing to reduce greenhouse gas emissions and to limit temperature rises to 1.5 degrees Celsius, compared to pre-industrial levels. A total of 196 parties signed the Agreement which demanded urgent socio-economic changes, and emission reduction strategies, based on the best available science. However, according to recent research carried out by the independent environmental research outfit Climate Action Tracker, to date only one country has actually put a plan in place which complies with the Paris Agreement — The Gambia. South Africa and the US are placed in the Insufficient Action category. The UK is in the Almost Sufficient category.

“The reality is that glaciers are now moving quicker than our political leaders! These climate negotiations have been dragging on for 27 years. Some of the delegates who will be there at COP26 in Glasgow in November weren’t even born when we started. That is a damning indictment.”

Research suggests that the Greenland melt could contribute to catastrophic rises in sea levels, flooding coastal cities, displacing tens of millions of people.

“It is up to us to take action,” warns Pugh. “Every purchase we make, on a daily basis, is a decision we are making about our future. The food we eat, the clothes we wear, how we get to work, how we invest our money — we have to be asking ourselves daily, am I making the most environmentally friendly decisions. You simply cannot afford to curl up on the bed and hide.” DM/OBP