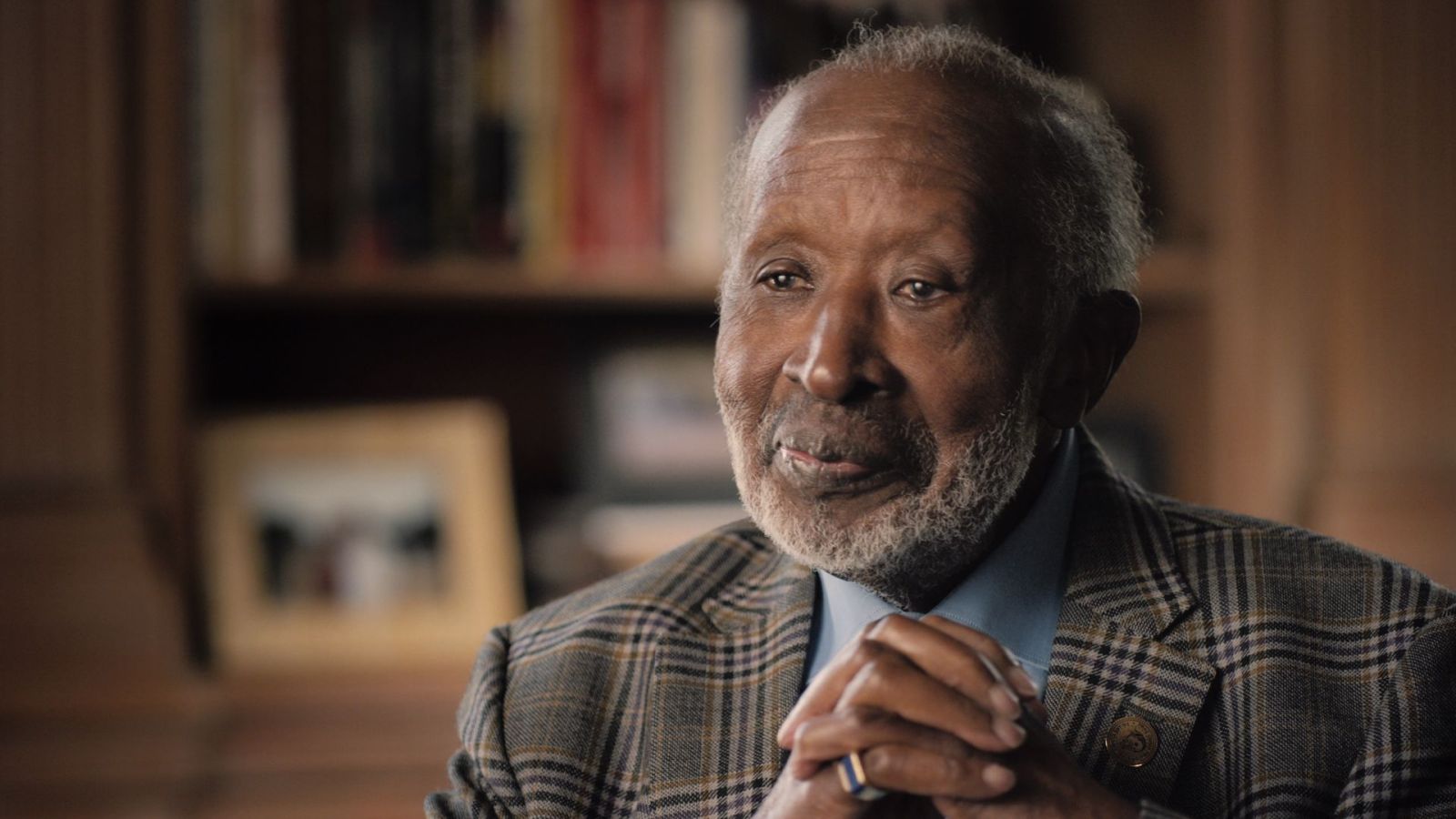 ‘The Black Godfather’ is a tribute to Clarence Avant, the prolific music executive and entrepreneur whose invisible hand guided politics and pop culture towards equality.

On 29 August 2021, the world bid farewell to a reggae legend – Lee “Scratch” Perry, the Jamaican record producer, most famous for managing great artists like the Beastie Boys, The Clash, and Bob Marley.

An eccentric character if ever there was one, several documentaries have been made about his extraordinary life, the longest of which, The Upsetter, can be viewed free of charge on YouTube. It’s a pretty safe bet that a posthumous documentary will follow shortly.

You may well have heard of Perry – like many other producers, he was a passionate artist who himself was almost as well-known as the musicians he represented; but today we’re watching a documentary about a producer you might never have heard of, whose footprint was as monumental as household names like George Martin and Quincy Jones.

The Black Godfather is a 2019 Netflix documentary about music producer and powerbroker Clarence Avant. You may not know him, but you know his legacy. Little Willie John, Jimmie Smith, Rodrigues, Bill Withers, even Barack Obama – Avant helped make them all, and many, many more.

Avant was a celebrity’s celebrity, and he knew everyone. Who do you want? Michael Jackson? Oprah? Madiba? He knew them all. Part of the appeal of the film is the endless stream of jaw-dropping interviewees who pitch up to speak his praises. P. Diddy, Lionel Richie, Snoop Dog, etc, etc.

If you’re willing to, jump into the film without watching the trailer to allow yourself the full force of amazement at the high-flying personalities whose lives Avant has touched.

The film begins with a montage of so many A-list stars that director Reginald Hudlin doesn’t even bother including their names until their second appearance. Hudlin begins the film with this tirade of glowing testimonials and no-name namedropping to elevate Avant’s mythology, creating a force field of excitement around him. If you’re not hooked within the first four minutes, if you aren’t bursting with curiosity about what made this man so revered among legends, watch something else.

Avant is a gruff, grinning 90-year-old man who truly doesn’t give a damn. Actually, there are far ruder things he doesn’t give, if you catch my drift. This man is a fully automatic cuss-word machine-gun – Samuel L Jackson might find his use of “mothafucka” excessive. He’s laid back, straightforward and slick. He speaks casually with the confidence of someone who knows they’re cool, but lets everybody else do the bragging for them.

Avant came from less than nothing – a poor and abusive home in the South, surrounded by the strangling grip of the KKK. His nickname as a boy was “Sweet Potato” because that’s all that his mother could afford to give him to eat.

Forced to flee from his hometown, he found himself in New Jersey, where he met Joe Glaser, the music production magnate who managed Louis Armstrong, Dave Brubeck and Billie Holiday.

During Prohibition in the US, bootlegging became intertwined with the entertainment industry, and even when Prohibition was repealed the underworld structures and gangsters remained. They owned the booking agencies, the publishing companies, record companies, and the clubs, so representing upcoming jazz musicians meant Avant was rubbing shoulders with a shady crowd, including Al Capone.

Avant unconvincingly denies everything – “business people”, he insists, “not Mafia, business”, and the only person in the film willing to call him out is Quincy Jones. Avant and Jones tease and squabble like loving, playful boys, and Jones is responsible for some of the best stories (which is saying something, considering that Avant emotionally supported presidents, turned down Michael Jackson, and helped Snoop Dog and P. Diddy out of gangsterism).

It was Avant’s apparent integrity within an extremely sketchy trade that garnered so much respect and made his name. He was a wheeler-dealer, but he was also a mentor and a protector. Bill Clinton says of him in the film that, “His advice, per word, is probably worth more than anybody I ever dealt with.”

Avant was often the only black face in the room. He went on to become manager for Lalo Schifrin who then composed famous soundtracks and themes for films like Mission: Impossible, Dirty Harry and Enter the Dragon. A black manager of white musicians in the 1950s – inconceivable.

Avant broke tradition constantly during a particularly racially charged time in the US’s history: It wasn’t only about his signing white acts on to a black-owned label. It was Avant, for example, who convinced US Football Hall of Famer Jim Brown to become a movie star, and later the first black actor to have a love scene with a white actress (unsurprisingly inciting huge backlash from the racist US community).

“You have this guy Clarence Avant that everybody is talking about, but nobody seems to understand what his official title was,” says Brown.

Hudlin has taken on a massive task summarising such a long and eventful career. The story weaves and bobs in every which direction – jazz, Hollywood, sports, real estate, assassination attempts, gangsterism, civil rights and on and on, but always maintains a continuity.

Hudlin packs in heaps of nostalgia and atmospheric old photographs, as many retrospective cultural documentaries do. He also utilises a black and white graphic theme that evokes a network or web, woven together by Avant in the middle of it all.

There is so much to cover, and the film did land up a bit too long at two hours, but the energy is exuberant throughout. Eyes are lit up with admiration and there are some wonderfully juicy sound-bites of celebrity appreciation:

Jamie Fox does numerous imitations of musicians who Avant brought up – some of the funniest, most charming moments. Obama says profoundly, “There’s the power that needs the spotlight, but there’s also the power that comes from being behind the scenes.” And Snoop Dog puts it eloquently thus: “Oh man he was too fly, ya unnastan me? He walk da walk, talk da talk, dressed da part – played it, y’know wad I’m sayin’?”

The celebrity flattery is highly entertaining, though it continues until the potency of each grand statement is a little diluted. It’s important to note that The Black Godfather was produced by Clarence Avant’s daughter, Nicole Avant, who did not inherit her father’s modest behind-the-scenes sensibility.

She has that irritating lap-of-luxury smugness one associates with the Kardashians or Paris Hilton. She constantly wrangles her way in front of the camera and if you skip most of the clips of her speaking, you will miss nothing of substance.

The film is primarily a tribute, and it does shy slightly away from controversy. One of the things Avant is revered for is his ability to recognise talent where others couldn’t – it was Avant who insisted upon producing Rodrigues even though his records weren’t selling – but those who have watched Searching for Sugarman might remember how much effort it took to persuade Avant to let Rodrigues have the royalties he deserved when his popularity in South Africa and Australia came to light. That detail is conveniently missing in The Black Godfather.

Nicole Avant pushes a sob story about her family nearly going broke, which is difficult to sympathise with because they were immediately bailed out by Clarence Avant’s wealthy friends. This failed plea for pity slows down the film right in the middle, a crucial moment in a documentary where viewers are most likely to abandon ship.

Nicole Avant also seems to have encouraged the shoehorning of her father into the role of civil rights hero, a role he bluntly denies. The film runs through events of civil rights history, not all of which are relevant, so as to politicise Avant’s legacy, even though by his own admission, he was not truly motivated by ethics.

Avant did a huge amount for black civil rights, but it didn’t cost him very much. He initially resisted involvement in issues of equality, never marched, and insists to this day that his main motivation in life is money (it’s unclear whether that was a façade or not). He did seem to care about improving the lives of black people, but some may say that a man with the power he wielded could have done more.

Regardless of the extent to which he did or didn’t care, it is amazing how much this one man did for black activism, and how few people know about it. It’s exciting to learn about this audacious, prolific giant that most have barely heard of. Despite Nicole Avant’s attempts at sanctifying her already extraordinary father, The Black Godfather is an energetic film packed with adoration, expletives, and serendipitous anecdotes, and of course, an extremely groovy soundtrack. DM/ML

The Black Godfather is available in South Africa on Netflix.
You can contact This Weekend We’re Watching via [email protected]