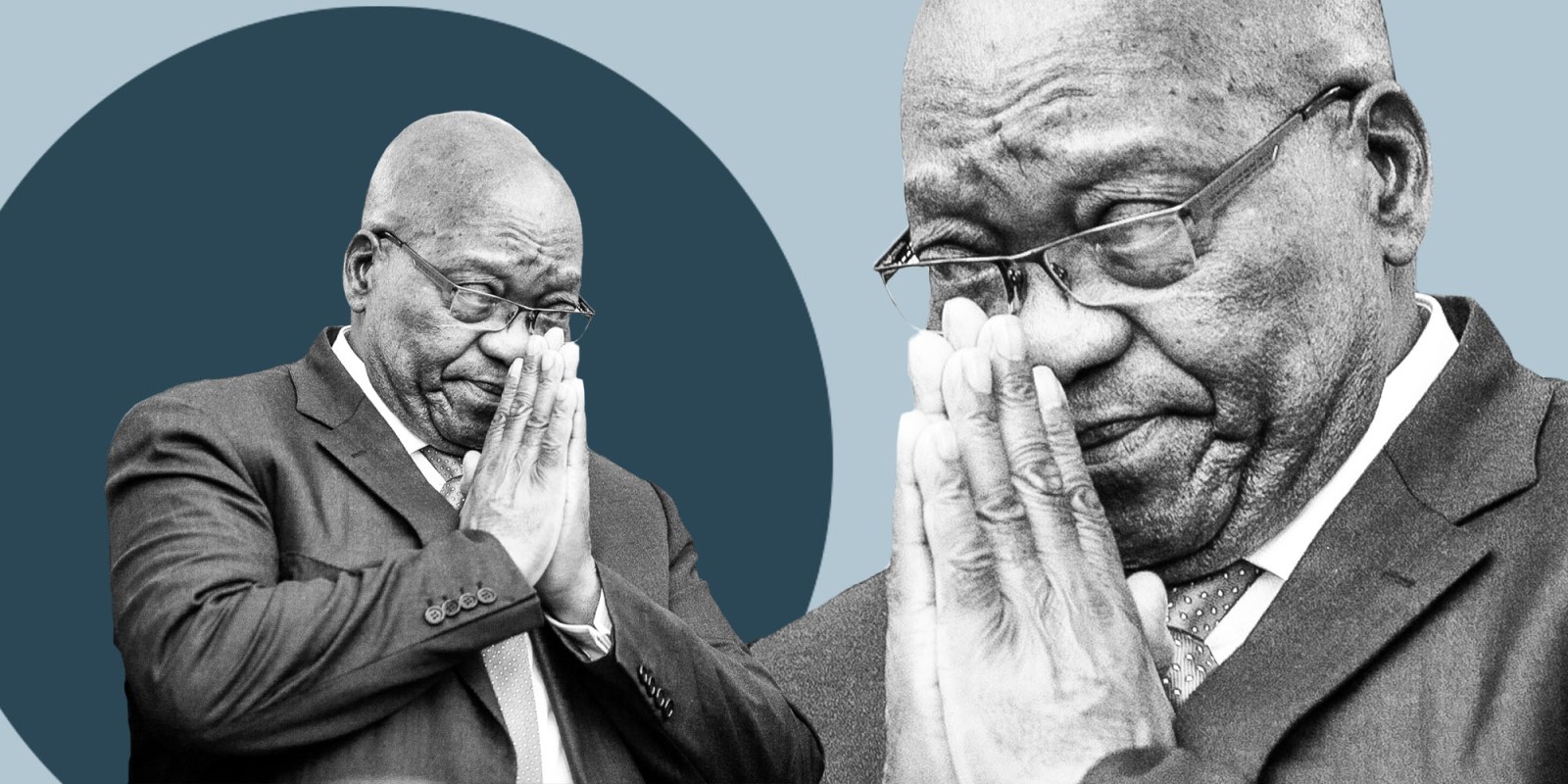 The decision to medically parole former president Jacob Zuma makes a mockery of the judicial process and “harms the courts in exactly the same way that Zuma’s contempt of court did”, Democratic Alliance (DA) leader John Steenhuisen contends in an affidavit filed with the Gauteng High Court on Friday.

“It sends the message to every South African that, as long as you are powerful and politically connected, you need not fear sanction for breaking the law. If you are sent to prison for your crimes, you will be let out well before the end of your sentence on ‘medical parole’.”

The official opposition is challenging the “irrational” decision of correctional services commissioner Arthur Fraser, who revealed this week that he authorised the release of Zuma on medical parole, despite the medical parole advisory board finding against doing so.

The DA wants the decision reviewed and set aside.

Fraser is a former director-general of state security, and it was during his tenure in that position that he has been accused of doing Zuma’s bidding, something he has repeatedly denied.

Seventy-nine-year-old Zuma was jailed at Estcourt Correctional Centre in the early hours of July 8 after being found in contempt of a Constitutional Court order that he appear before the Zondo Commission.

On 15 August, correctional services released a statement saying Zuma had undergone a “surgical procedure” the day prior, “with other procedures scheduled in the coming days”, and remained in hospital. Zuma is believed to be in a private Pretoria hospital.

He is alleged to have been suffering from an unspecified “medical condition” for at least 18 months, surgery for which had been delayed.

The former president’s alleged ill health has been a talking point for months. Last year, he missed a high court appearance to determine a holding date for his Arms Deal graft trial.

At that sitting, a medical certificate submitted to the court by Zuma’s attorney to explain his absence was rejected by the judge, and a stayed warrant of arrest was issued for Zuma. He was allegedly in Cuba at the time for medical treatment.

While Zuma’s trial has technically started, it too has had to be postponed at least twice because of his alleged health problems. The state is trying to ascertain if Zuma is fit to attend proceedings and stand trial, but the former president is resisting being examined by a state-appointed private physician, contending that his medical team’s professional diagnosis should suffice.

Even prior to being sentenced for contempt, the possibility of Zuma being released early via medical parole if found guilty in the Arms Deal matter had been a talking point.

This is largely because his former financial adviser, Schabir Shaik, was released on medical parole in 2009 after serving just over two years of a 15-year sentence. Shaik was convicted of two counts of corruption and one of fraud in June 2005 for illicit financial dealings involving Zuma. Presiding Judge Hilary Squires described the relationship between the two men as one of “mutually beneficial symbiosis”.

It is this matter that opened the way for Zuma to finally stand trial – albeit 16 years later.

Steenhuisen refers to Shaik in his affidavit, saying that since being released on medical parole, Shaik “has regularly been seen golfing, allegedly throttled and slapped a journalist, and was accused of punching and slapping a man at a mosque during an argument over parking. This is not the conduct of a terminally ill man. He remains alive and apparently healthy today, 12 years later.”

Furthermore, it had been “widely speculated that Mr Shaik was released not because he was genuinely ill, but because of his proximity to Mr Zuma. His apparently rude health in the 12 years since his release support this conclusion.”

Steenhuisen says it is possible that Zuma was only diagnosed with an illness that justified medical parole after being jailed, but that this was “contradicted by known facts and there is no publicly available evidence to support that conclusion”.

The court, therefore, could not accept without evidence the word of correctional services about the former president’s eligibility for medical parole.

Correctional services announced on Sunday, 5 September, via a statement, that Zuma had been placed on medical parole “impelled by a medical report”.

But the department was vague as to the specifics, saying instead: “Apart from being terminally ill and physically incapacitated, inmates suffering from an illness that severely limits their daily activity or self-care can also be considered for medical parole.”

There should also be a low risk of reoffending, according to the statement, and appropriate arrangements had to be made for “supervision, care and treatment within the community to which the inmate is to be released”.

Missing from the statement, Steenhuisen says in his affidavit, is who granted the medical parole (which is now known), and if Zuma satisfied the legal requirements for medical parole. “It merely recites the requirements.”

We had then received further reports, medical reports, that indicated that he requires specialised treatment. And, it was only around the third report that we received, where his medical team – the medical team in conjunction with our team –indicated that he can no longer be kept in our facility because the type of care, medical care required, we are not able to provide.

The statement also does not provide detail about the source of the medical report, says Steenhuisen.

On Wednesday night, Fraser said during an interview with the SABC that it was evident that Zuma was “frail” when first jailed. This was following the former president declaring his comorbidities and an assessment provided by the military health services, which treats Zuma.

Continued Fraser: “We had then received further reports, medical reports, that indicated that he requires specialised treatment. And, it was only around the third report that we received, where his medical team – the medical team in conjunction with our team –indicated that he can no longer be kept in our facility because the type of care, medical care required, we are not able to provide.”

Fraser said the same assessments were made “with every other offender that we have in our facilities”.

“Our doctors, our nurses will write referrals to the head of centre and say: ‘We’ve got a situation, please transfer.’”

Zuma had to be moved to “a tertiary institution”, said Fraser, as the care he needed could not be provided within correctional services. It was from this outside institution that further reports were received of  “a range of procedures that had to happen”.

Medical staff had then applied for Zuma’s medical parole, “and I think that was at the beginning of August”, said Fraser.

That application was directed to correctional services’ healthcare and the medical advisory parole board, he said. A doctor was then allocated to “do an observation” of the former president, and made recommendations to the parole board.

The board did not approve medical parole, said Fraser, “because they indicated that he was in a stable condition”.

“The head of the centre, who has the authority to decide, reviewed the information available, and then indicated that the conditions, based on all of the reports we have, require us to release the former president.

“I then rescinded those delegations, because the original delegation sits with me … and I took the decision to place him on medical parole, and I have given a host of reasons. The reasons are available, it’s in documentation, and it will be presented to whoever needs to see that. I am sure Parliament will be asking.”

Steenhuisen says of the revelation that Fraser took the decision to release Zuma on medical parole against the recommendation of the board, that it “was taken for an ulterior purpose, not permitted by the [applicable] Act and Regulations, and not rationally connected to the purpose of medical parole or the information before the Commissioner”.

The effect of the parole decision was “to evade the Constitutional Court’s decision to imprison Mr Zuma”.

It is the job of the board, which by law has to consist of medical practitioners, to determine if the parole is medically appropriate, while the Commissioner’s job “is to determine thereafter whether medical parole is appropriate from a correctional services perspective”.

“Crucially,” continues Steenhuisen “the job of the Commissioner is not to determine whether medical parole is medically appropriate. He does not have the relevant expertise.” DM