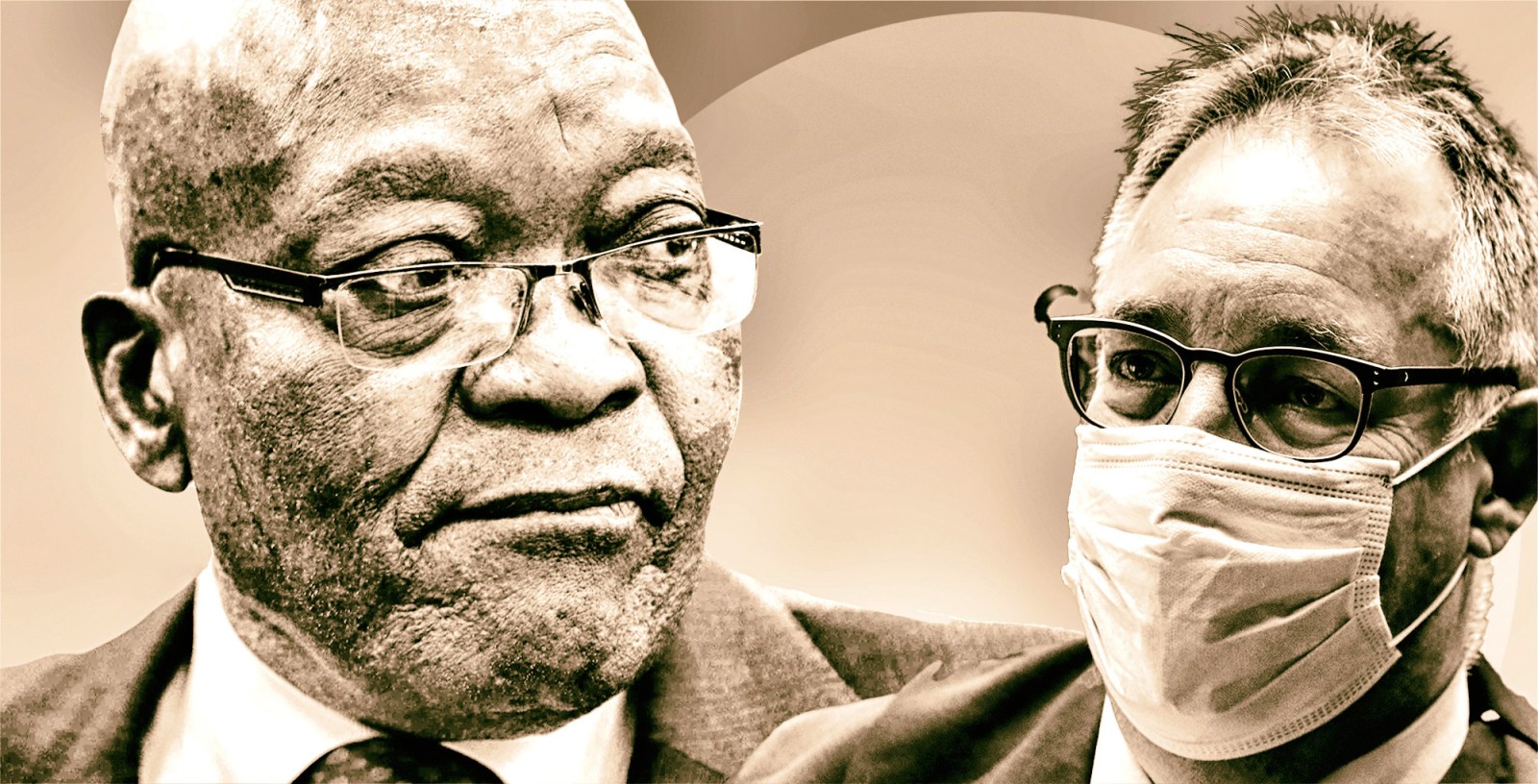 Justice and Correctional Services minister Ronald Lamola is in possession of a letter referred by President Cyril Ramaphosa regarding an alleged breach of prosecution policy and the prosecutorial code of ethics by Billy Downer and the NPA relating to the ‘medical situation’ of former president Jacob Zuma. Lamola’s office confirmed this information with Daily Maverick on Friday.

Jacob Zuma’s legal team wrote to President Cyril Ramaphosa on 19 August seeking an investigation be launched into the alleged breach, with the president responding on 25 August that the matter had been referred to Justice and Correctional Services minister Ronald Lamola, and that he had requested that the minister refer it to the Legal Practice Council, which is a standard referral for most such alleged breaches.

The letters form annexures to the latest supplementary affidavit filed by Zuma’s legal team with the Pietermaritzburg high court on Thursday.

That affidavit breaks down how Zuma alleges he has further evidence of misconduct against Downer, a veteran prosecutor, which he intends to use to bolster his special plea that Downer be removed from his arms deal graft trial on the grounds of bias and not being fit to prosecute.

Bethuel Thusini, Zuma’s attorney, drafted the affidavit on behalf of Zuma, who is still allegedly hospitalised in Pretoria and was granted medical parole on Sunday. The former president was sentenced to 15 months direct imprisonment in July for not adhering to a Constitutional Court order that he appear before the Zondo commission.

“While preparing our application, an enquiry was made by a journalist who appeared to have a source in the NPA on matters involving Mr Zuma, who broke the story of the medical report/letter and, to our utter surprise and shock, and referred to its contents in such a way that made it abundantly clear that the journalist had read or been advised on the contents thereof. This was despite serious pleas made by Mr Zuma’s legal representatives to the NPA’s legal representatives to treat the report or letter with the strictest confidence.”

Zuma’s alleged ill health and still undisclosed “medical condition” have dominated public discourse for months. The state is seeking to have the former president examined by its chosen physician to ascertain if he is fit to attend court proceedings and stand trial.

The spokesperson for the former president’s foundation, Mzwanele Manyi, has stated publicly that Zuma is tired of having his health matters second-guessed, and that his reluctance to be examined by a physician chosen by the state could be put down to mistrust of how he has been previously treated where his health is concerned.

But at the latest hearing in the arms deal matter, which took place virtually on Thursday, Zuma’s advocate, Dali Mpofu (SC), said that Zuma’s medical team and that of the state were finally “finding each other” and “getting close to each other”.

In Thusini’s affidavit, the subject of Judge Dhaya Pillay’s treatment of Zuma and his alleged ill health, is again broached.

In February last year, Pillay said in court that a sick note bearing the stamp of 1 Military Hospital, issued by Dr ZK Motene and used to explain Zuma’s absence from court that day, appeared to have been altered without a supporting signature, that it did not indicate if Motene was a doctor, used confusing language and gave no indication to the nature of Zuma’s alleged illness, merely referring to a “medical condition”.

Zuma’s attorney at the time, Daniel Mantsha, insisted that the court should accept the sick note because it had “an original stamp” from the hospital. He also told the court the health of a former president “is a matter of national security and a matter of our armed services”.

Pillay eventually ended up issuing a stayed warrant of arrest for the former president. Zuma was alleged to have been in Cuba for medical treatment at the time of his missed appearance.

Thusini said that Pillay’s order was done with “active submissions” from Downer. Having the medical note questioned by the NPA and rejected by the court had caused “serious anxiety” for Zuma and his medical team.

Any remarks on Zuma’s alleged health condition from the state were “calculated to trigger public ridicule of not just Mr Zuma, but the state doctors treating Mr Zuma who are now suspected of being party to what Mr Downer and the NPA regard as a dishonest stratagem to avoid prosecution”.

Such “insults” had come to be accepted by Zuma and his legal team from a “biased media” said Thusini, “but it cannot be countenanced from an organ of state, whose duty is to be fair and dispassionate”.

“Apart from anything else, it is a degrading and hurtful tendency to Mr Zuma, who is being subjected to unnecessary and emotional trauma in addition to his physical afflictions.”

On 10 August, Zuma was ordered by the presiding Judge in the arms deal case, Piet Koen, to submit a medical report to the state by 20 August, but missed the deadline. His legal team wrote to the NPA — in a letter dated 20 August — saying that because of “several factors” it would not be possible to submit the medical report by the 20th, but would do so by or on 27 August.

These “factors” included “unforeseen major developments pertaining to the status of his health, as well as the recent procedure performed on him (and publicly announced by the department of correctional services)”.

The delays would be explained in court with oral evidence if required, said Zuma’s legal team.

The state rejected this. It is seeking to have Zuma examined by Professor Andrew Sarkin, a specialist physician and cardiologist, whom the state said will also need access to Zuma’s “patient file and medical records (including X-rays, blood results, scans, procedure reports and all other patient information)”.

“This will provide a preliminary assessment and further examinations/access to records may be required,” according to the state, in a letter to Zuma’s team, which is an annexure to Thusini’s affidavit.

Thusini continues in the affidavit that the second act of misconduct by the NPA and Downer was “the unlawful attempted physical examination of Mr Zuma”.

Zuma is of the view, said Thusini, that Downer had wrongly interpreted Justice Koen’s order that he be examined by a doctor chosen by the state, and that this was done by Downer for “self-serving” reasons.

“Instead of offering an apology for misreading and misinterpreting the order of [Justice Koen], he sent a private doctor accompanied by his police investigator, a Colonel Du Plooy, to physically arrive at a private hospital to conduct an illegal medical examination of Mr Zuma.

“He did so without any legal basis. He did so to purely humiliate Mr Zuma who, had he not voiced his objection, might have been subjected to an unauthorised and unlawful medical examination. Notably, no notification to or arrangement with Mr Zuma’s legal team was done by Mr Downer.”

“In breach of the order of court, Mr Downer plainly violated Mr Zuma’s rights. The more detailed envisaged medical report had not yet been issued by the treating medical team.

“The employment of a private doctor on behalf of the NPA to examine the medical records of Mr Zuma was in itself, therefore, an anomaly because it created the impression that Mr Zuma’s doctors and/or Mr Zuma had conspired to manufacture medical conclusions that must only be believed if the NPA’s own private doctors prematurely examined him without seeking his consent.

“Sending to Mr Zuma’s hospital a Professor Sarkin to conduct a physical examination without any basis, which would possibly have included taking his blood samples and other vital statistics, was the most irresponsible violation of Mr Zuma’s rights. It is a complete disregard of Mr Zuma’s constitutional rights and demonstrates a loss by the NPA prosecutors of their constitutional conscience.”

As a former head of state, there is “the added issue of security related to concerns over and above his health and medical rights which he must be accorded, like any other citizen,” said Thusini.

“The fact that Mr Downer and his prosecutors will not believe the word of the state doctors treating Mr Zuma unless the medical report is checked by Professor Sarkin who has never treated Mr Zuma is a telling indication of the underlying prejudice and undermining of Mr Zuma, his medical team and possibly his lawyers.

“It has never been made clear to Mr Zuma who this Professor Sarkin is, and why he was specifically chosen for this medical mission of the NPA. A request for his curriculum vitae has never been honoured by the NPA. It has been ignored.”

Zuma and Thales have pleaded not guilty to all charges.

The matter is set to continue on 21 and 22 September, in open court. DM