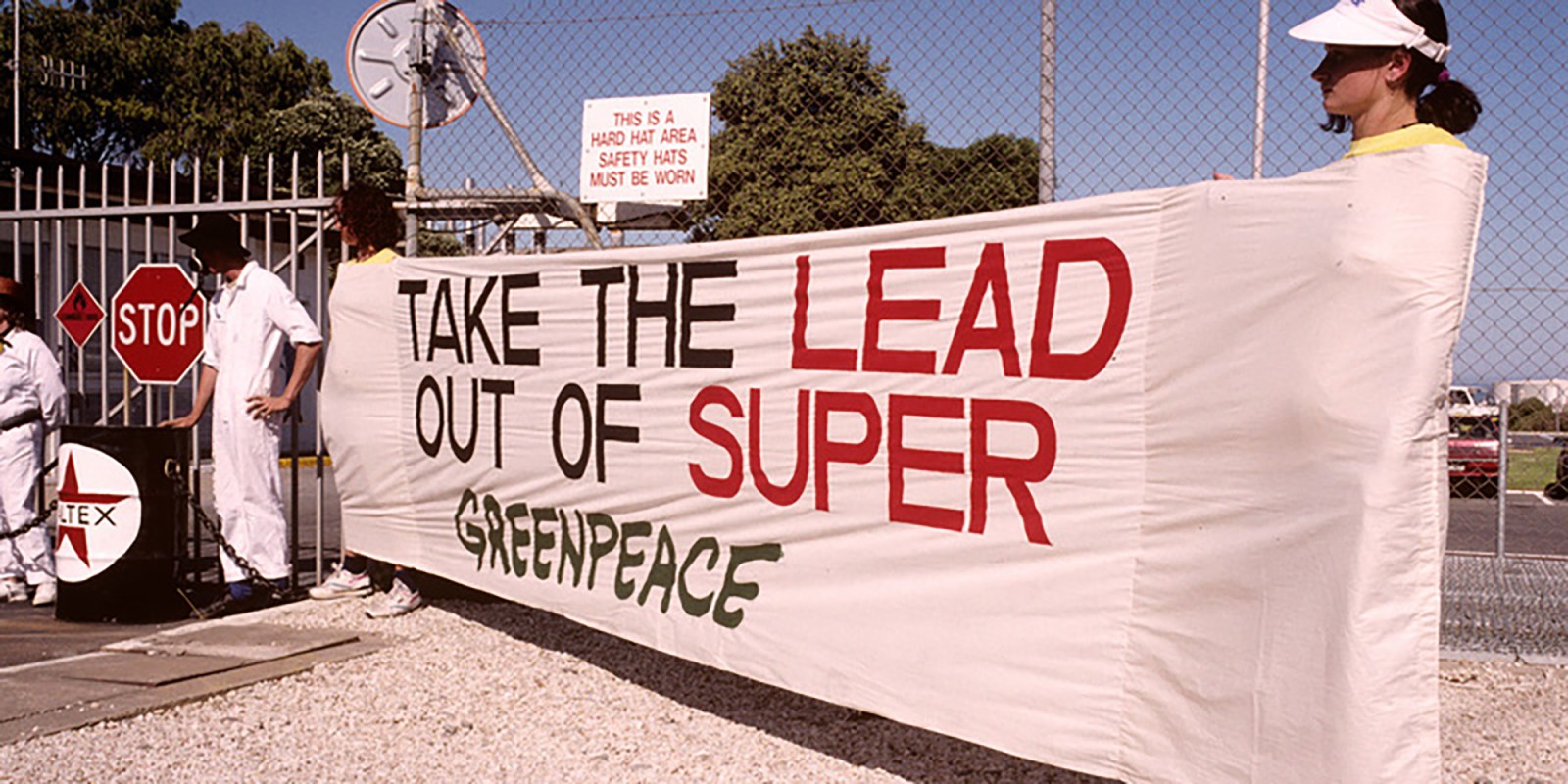 Most high-income countries had phased out leaded petrol by the 1980s, while low to middle-income countries were still reliant on it, with South Africa banning the fuel only in 2006. (Photo: Greenpeace / Robert Cartmel)

Leaded petrol has officially been phased out after alarms were raised over its medical implications more than a century ago. For years, studies and reports have also shown health and environmental concerns over coal. Perhaps the phasing out of leaded petrol has lessons for coal.

Following 19 years of campaigning through a private and public partnership led by the United Nations Environment Programme (Unep), leaded petrol has officially been phased out and all its stocks exhausted. This followed the last of its reserves being used up in Algeria two months ago.

Leaded petrol, which contains harmful amounts of lead, caused more than one million premature deaths every year and has been linked to the contamination of dust, air, soil, water and food crops.

The fuel also led to health risks for strokes, cancer and heart disease, has links with dementia and, according to one study, may have reduced the intelligence of children who grew up in the leaded fuel era. It has also been suggested that the ban on leaded petrol has led to a decrease in violent crime. The ban has saved the global economy $2.44-trillion due to the health costs associated with leaded petrol.

Much of the pushback against the phasing out of leaded petrol came from countries that claimed older vehicles still needed the fuel, Jane Akumu, a Unep manager, told Daily Maverick.

“Countries that had refineries were still a big challenge. How to move to unleaded petrol, the upgrading and [associated] justification and cost configurations, etc [were also a challenge],” Akumu said.

Blueprint for phasing out of coal

A similar story has been playing out over the effects on towns near coal plants from the pollution caused by the electricity generation process. With calls for a just transition escalating, backed by evidence of respiratory and environmental effects, the phasing out of leaded petrol could be a blueprint for the phasing out of coal.

“The package here for leaded fuels does present exactly what we are seeking to do under the Paris Accord, precisely. It is a bigger ask and more complex, but there are lots of lessons we can learn,” said Inger Andersen, executive director of Unep.

Africa and the Middle East are expected to phase out coal by 2034. With South Africa’s energy supply still more than 80% reliant on coal, the country has 13 years to meet its targets as set out in the Paris Agreement.

“There are many parallels between this programme and the energy transition and also achieving the aims of the Paris Agreement. It needs all sectors of society to be included because everyone has a role to play in the transition to a net-zero future,” said Brian Sullivan, executive director at the International Petroleum Industry Environmental Conservation Association.

South Africa’s efforts towards a just transition to greener energy to redeem its status as Africa’s biggest polluter — because of its coal dependence — are being slowed by debate over the capacity of renewable energy to carry South Africa’s base-load. Furthermore, with the unemployment rate hitting record numbers, much of the conversation has been around what will happen to the more than 100,000 workers relying on the national power utility for employment.

Limited funding and developed countries not meeting their climate financing commitments have had a damaging effect on the progress of South Africa advancing its renewable energy sector. Although policy regulations moving towards the 100MW embedded generation threshold have increased, the completion of the Medupi Power Station, which uses 16 million tonnes of coal a year, makes for one step forward and three back.

With the respiratory health of those in towns near coal power stations in serious decline because of poor air quality, and seven million deaths globally due to air pollution, there is no doubt that the lessons from the phasing out of leaded petrol are many.

“We must now turn the same commitment to ending the triple crisis of climate disruption, biodiversity loss and pollution. We need to shift from fossil fuels to renewable energy. We need global mobility with no emissions at all. We must reform our energy, food and financial systems to create a world of peace that works with nature, not against it,” said UN Secretary-General António Guterres.

“Africa’s governments must give no more excuses for the fossil fuel industry. Pulling off a just transition from dirty coal and other fossil fuels in South Africa and elsewhere in the continent will protect community health, avoid catastrophic climate change and ensure decent employment for the youth,” the campaigner said. DM/OBP