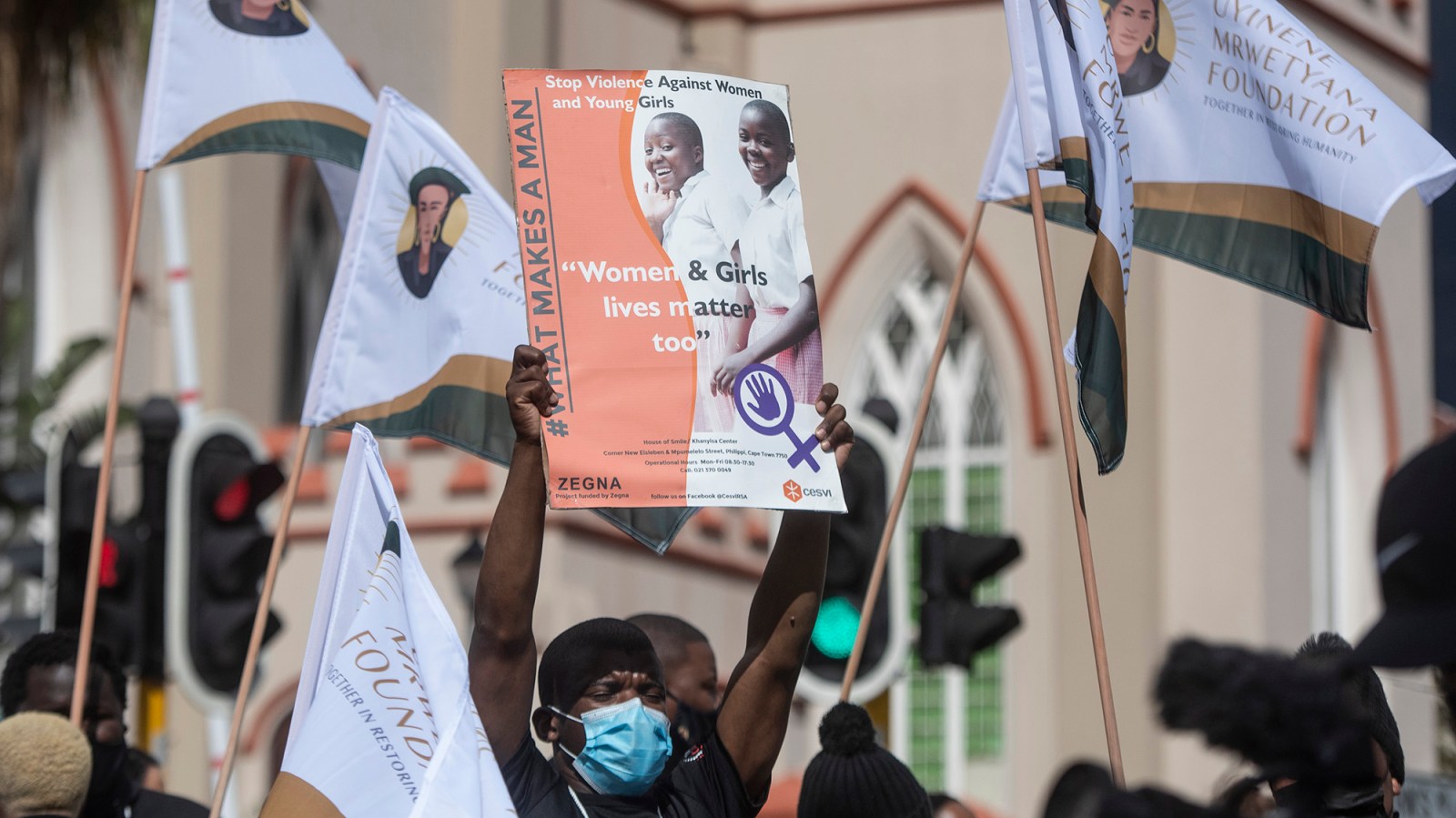 Gender activists gather outside Parliament on on 28 August 2021, the second anniversary of the rape and murder of UCT student Uyinene Mrwetyana. (Photo: Brenton Geach / Gallo Images)

As Women’s Month draws to a close, the Department of Women took stock of developments made in implementing the government’s bold plan to eradicate gender-based violence. Progress is slow.

One year on, progress in implementing the National Strategic Plan on Gender-Based Violence and Femicide (NSP) has moved at a snail’s pace. This was according to a forum hosted on Monday by the Ministry of Women, Youth and Persons with Disabilities.

The discussion followed President Cyril Ramaphosa’s release of the Year One Implementation Report 2020/21 of the NSP on National Women’s Day and is a precursor to this year’s 16 Days of Activism for No Violence Against Women and Children campaign.

The council was envisioned as a permanent body with members from government, civil society and other sectors that would oversee the fulfilment of the NSP, but according to the Year One report, which covers the period from May 2020 to April this year, the absence of the council has hindered “effective monitoring” of the GBV response.

Last year, activists were at odds with the Department of Women for dragging their feet in ensuring legislation was passed to legitimise the council. It was proposed that a board of trustees be put in place in the interim.

Shoki Tshabalala, the deputy director-general of the department, said Covid-19 had hindered some of the NSP’s progress. GBV numbers have, however, continued to rise during the pandemic.

Crime statistics show that more than 10,000 people were raped in South Africa from April to June 2021.

Major-General Thokozani Mathonsi, the SA Police Service’s head of social crime prevention, told the forum that although all police stations now have evidence collection kits, the backlog of domestic violence and sexual offences cases had increased.

Mathonsi said the SAPS aimed to reduce the backlog to about 5,000 by the end of the current financial year.

“We are dealing with a live system,” he said. “As we deal with cases, we have new ones coming in.”

The backlog was exacerbated by the closure of forensic labs because of Covid-19 outbreaks, said Mathonsi.

Between May 2020 and April this year, the SAPS placed 298 more detectives in the Family Violence, Child Protection and Sexual Offences units. In the second year of the NSP, the SAPS will pilot GBV desks at 30 police stations that have registered the most reports of GBV and sexual offences.

Lusikisiki and Inanda police stations have been alternating as the top hotspots for rape in the quarterly crime statistics.

A damning Commission for Gender Equality report published in April found the government had missed more than 60% of the targets set out in the Emergency Response Action Plan (Erap) to deal with gender-based violence and femicide. The Erap was the precursor to the NSP.

The forum was held on the same day the Minister for Women, Youth and Persons with Disabilities, Maite Nkoana-Mashabane, visited the family of slain University of Fort Hare student Nosicelo Mtebeni at Malosini village in Matatiele, Eastern Cape.

According to the National Prosecuting Authority, Mtebeni’s boyfriend, Alutha Pasile, confessed to murdering the 23-year-old law student in a jealous fit of rage. Mtebeni’s dismembered body was found in East London.