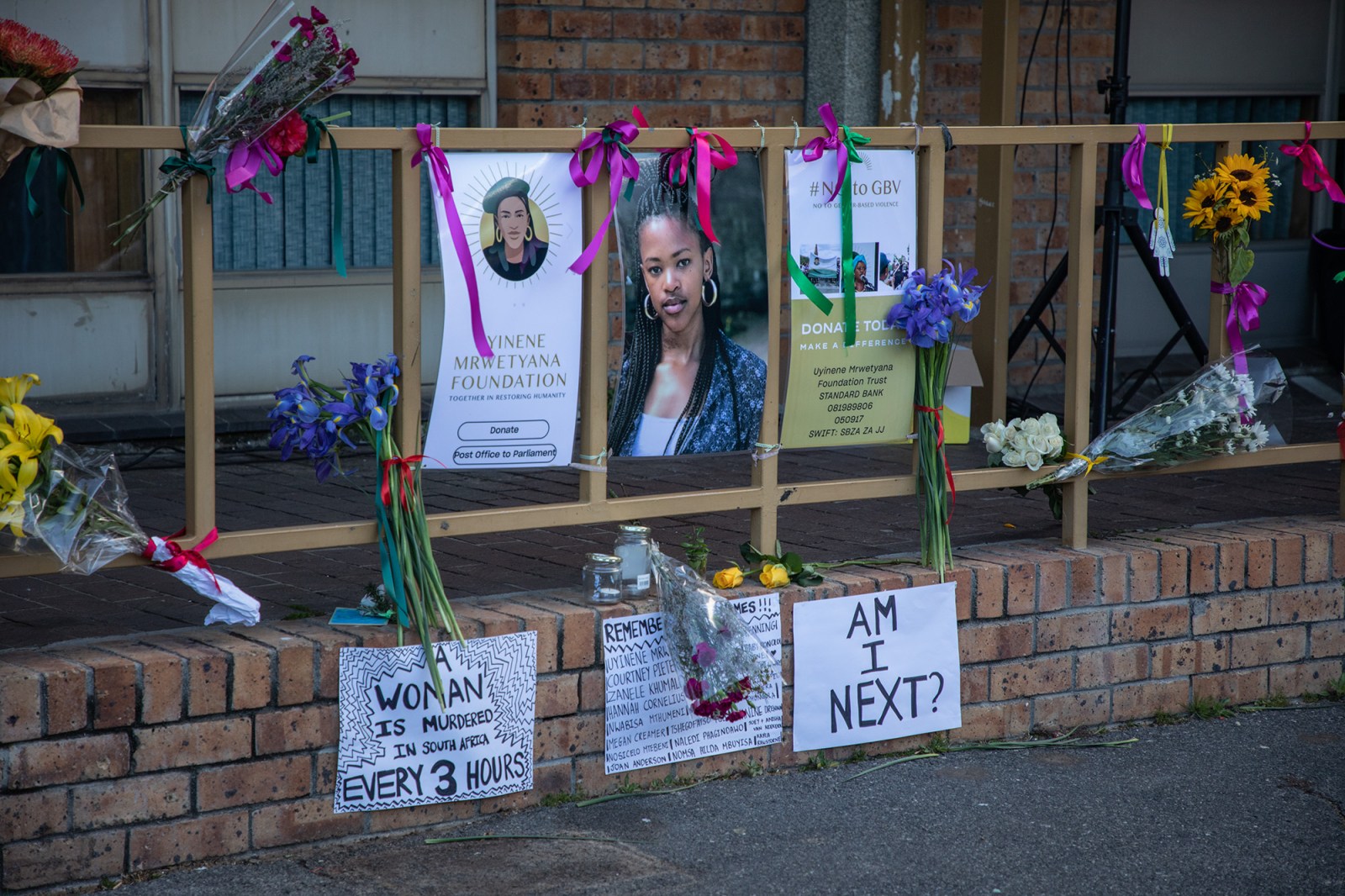 People leave flowers and tie ribbons to the railing of the post office in Claremont, in commemoration of Uyinene Mrwetyana’s murder on 24 August 2021. (Photo: Victoria O’Regan)

Tuesday, 24 August, marked two years since Uyinene Mrwetyana’s rape and murder at a Cape Town post office. The community gathered to remember her.

For the second consecutive year, on 24 August (Tuesday) the Claremont community in Cape Town gathered with candles and flowers to commemorate Uyinene Mrwetyana’s brutal death at the hands of a post office worker.

On the railing outside the Clareinch post office, green, yellow and purple ribbons were tied. There were pictures of Mrwetyana. An A4 piece of paper was pasted on the bottom of the railing with the names of women affected by gender-based violence.

About 40 people, young and old, braved the cold to attend the commemoration service. Some of them tied flowers to the railing during the hour-long service. Hannah van Niekerk, a UCT student, held sunflowers, which she later placed on the railing.

“I’m here to remember Uyinene and all the other women who’ve died from gender-based violence. But this death was close to home for me, because I live quite close by and because you don’t expect someone to die at the post office,” Van Niekerk told Daily Maverick.

On Saturday, 24 August 2019, Mrwetyana went to the post office to collect a parcel. Luyanda Botha, a post office worker, told Mrwetyana to come back later. When she did, he raped and murdered her.

Botha then dumped her body in Khayelitsha and set it alight. Mrwetyana’s burned remains were discovered on 26 August.

Three months later Botha was sentenced to three life sentences for rape, murder and obstructing the administration of justice. It wasn’t his first brush with the law. In 1998, he was convicted of carjacking and received an eight-year sentence, of which three years were suspended.

David Meinking, the postmaster at the Clareinch Post Office, where Mrwetyana was murdered, said that staff members “were traumatised”, “outraged at what happened” and “felt guilty” about Mrwetyana’s death.

“We, as the Post Office, want to apologise again for what happened even though we know that an apology will not be strong enough for the loss,” said Meinking.

Kate Christie, a Claremont resident, said Mrwetyana’s death was “utterly devastating” not just for the community, but the whole country.

“We’re holding this [commemoration service] for her mother, her father and her brother. We are still appalled and sad,” said Christie.

Sharna Fernandez, the MEC for Social Development, who was also in attendance, said nothing had changed since Mrwetyana’s death because, “Two years later, a woman still gets murdered every three hours. Gender-based violence isn’t only a woman’s problem. We need to heal the psyche of this nation, we’re a broken nation. The justice system is broken. It’s sad and systematic. The justice system needs to be overhauled as a matter of urgency.”

“It pains me because I don’t know where we should hide our kids. I recently heard about [slain student] Nosicelo [Mtebeni]. When we take our children to school, we don’t expect them to come back dead,” an emotional Ncumisa Mahangu told Daily Maverick.

Postcards were handed out to those present and people were urged to write about their experiences of gender-based violence. This is part of the Uyinene Mrwetyana Foundation’s “Post Office to Parliament” campaign.

These postcards can be sent to the Uyinene Mrwetyana Foundation through their website or to the post office in Claremont. The postcards will be collected by the foundation on Saturday, 28 August, and handed over to Parliament.

Mrwetyana’s family will be at the post office and later at Parliament on Saturday. DM

Postcards and letters can be sent to the Uyinene Mrwetyana Foundation until 5pm on Wednesday, 25 August. For more information, go to the website: https://www.uyinenefoundation.co.za/p2p