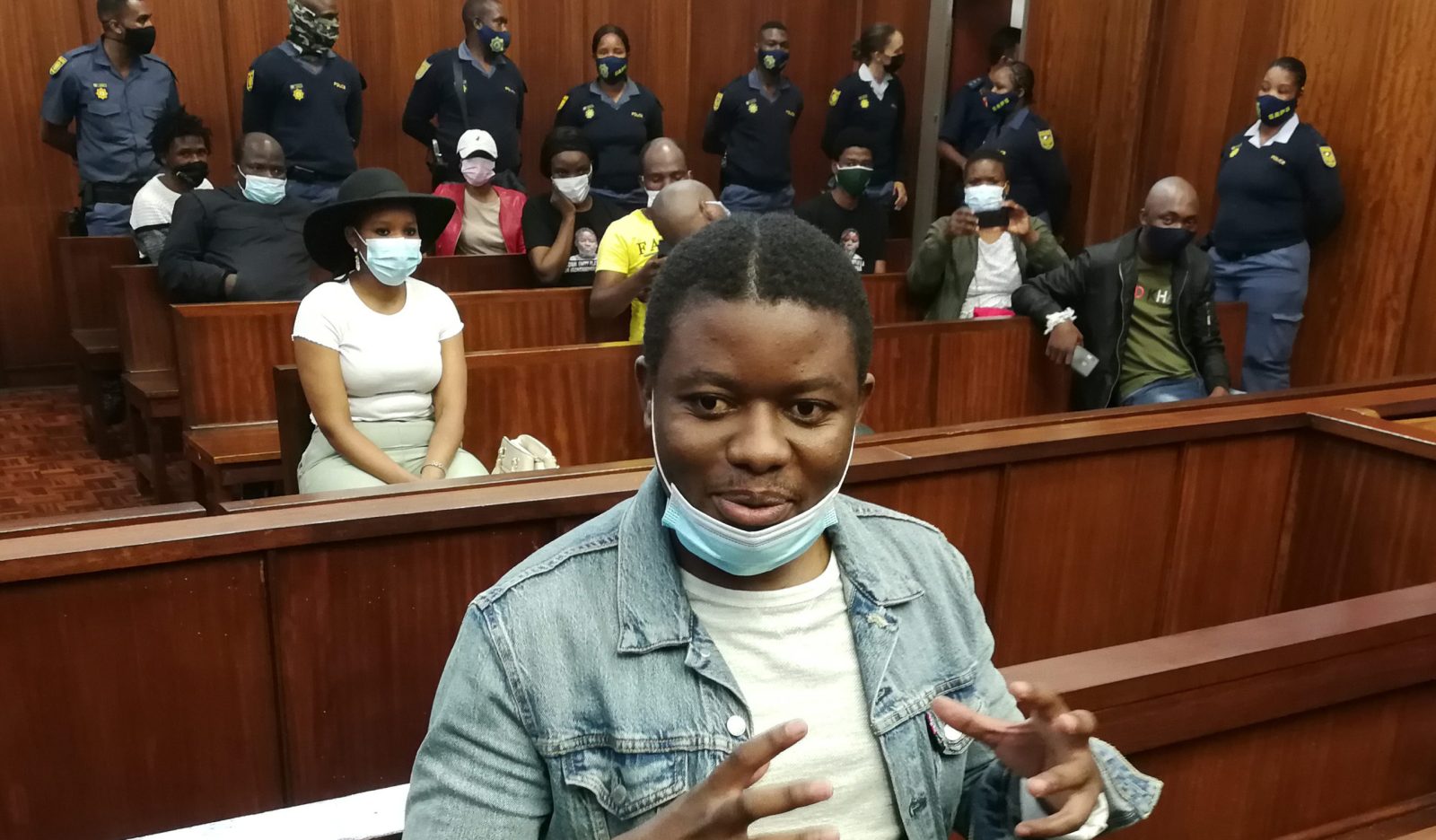 A veteran police officer on Thursday described KwaZulu-Natal #FeesMustFall activist Bonginkosi Khanyile — one of the alleged instigators of last month’s devastating civil unrest — as an egotist hell-bent on promoting destruction in the province and country in a misguided quest to see former president Jacob Zuma released from prison.

“His preparedness to take the steps he had by mobilising the masses to cause the devastation it did, and then to incite them to persist and intensify their destruction, makes me believe that he will stop at nothing to achieve his overt narcissistic objectives,” said Hawks officer Lieutenant-Colonel Anton Booysen in an affidavit.

Khanyile was appearing in the Durban Magistrates’ Court for a formal bail hearing, which the state opposed. He was arrested on Friday, 20 August on charges of inciting violence and contravening disaster management regulations, and has been held at the Durban Central police station while awaiting the outcome of his bail bid.

“From my supervision of the investigations conducted into the unrest, riots, [and] widespread public violence which resulted in the loss of life and devastation, the applicant has been identified as an instigator who has made a substantive contribution to the unrest that unfolded to bring about the state of unlawfulness threatening our constitutional and economic stability,” said Booysen, section commander of the Hawks’ Crimes Against the State investigations in KZN.

Booysen said in the affidavit that based on Khanyile’s conduct, if he was released on bail, “he will continue to incite more people in KwaZulu-Natal and in other provinces to continue with acts of violence, the damage of which may result in the destabilisation of the economy and rule of law”.

State prosecutor Yuri Ganga read the affidavit into the record.

At Khanyile’s first court appearance on Monday, the Hawks confirmed to Daily Maverick that the accused was the 15th alleged instigator to have been arrested since the July unrest, although Police Minister Bheki Cele had named him as the 16th.

Cele told the National Council of Provinces on Wednesday that the riots had led to the loss of 359 lives. He said that extensive damage was caused to 161 malls, 11 warehouses, eight factories and 161 liquor outlets and distributors. More than 200 shopping centres were looted and damaged, said Cele, and 100 gutted by fire.

“Looting also took place in about 300 shops in KZN and Gauteng, damaging over 1,400 ATMs.

“The wanton destruction resulted in 300 banks and Post Office branches being vandalised, 113 pieces of communication infrastructure were significantly damaged, and 1,119 retail stores were impacted and damaged,” said Cele.

Khanyile cut a more relaxed figure in the dock on Thursday than at his Monday appearance. Speaking to reporters, he said: “Even if we are facing the gallows and are sentenced to death, we will sustain [the call] that [Zuma] must be freed,” he said.

Zuma handed himself over to authorities in the early hours of 8 July to start serving a 15-month sentence for being in contempt of a Constitutional Court order that he appear before the Zondo Commission. On the first night of his arrest, reports came in of trucks being burnt and looted in KZN. The mayhem quickly spread around the province and to Gauteng.

The investigating officer in the case, Anton Booysen from the Organised Crime Unit, said the 31-year-old accused, if granted bail, would continue with his cause, which could lead to more incitement and violence.

Booysen said “regular intelligence-driven reports of a possible recurrence in the violence” were being reviewed and that “based on his conduct, the applicant poses a credible risk to society”.

The case against Khanyile was strong, asserted Booysen. “The entirety of the state’s case is based on video recordings of comments made by the applicant, which can hardly be disputed.”

In one video clip that is being used as evidence by the state, Khanyile can be seen at the time of the unrest allegedly inciting a crowd at a taxi rank in Durban.

[WATCH] FeesMustFall activist @Khanyile_BG on the ground mobilising for the #FreeZuma campaign.

According to Khanyile, this campaign will intensify even outside KwaZulu-Natal. pic.twitter.com/BnveSaXyQ4

This clip was one of five played by the state in the courtroom.

The Durban University of Technology graduate gained notoriety during the violent 2016 #FeesMustFall unrest. He was convicted and sentenced in 2019 for crimes committed during those riots: public violence, possession of a dangerous weapon and two counts of failure to comply with police orders.

Khanyile was placed under house arrest for three years, but only completed two. He was under suspension when the latest alleged crimes were committed.

Booysen said that given his previous conviction, Khanyile faced a lengthy incarceration if found guilty. This, he said, would provide a motive for Khanyile to evade trial if released on bail.

Media interviews with an unrepentant Khanyile, conducted during the #FeesMustFall era, also formed part of the state’s evidence on Thursday.

Booysen said: “The applicant has demonstrated through his [prior and recent] actions that it is his nature to be defiant and there is every likelihood that he will not comply with any bail conditions that are set.”

A decision is expected to be handed down on 31 August. DM