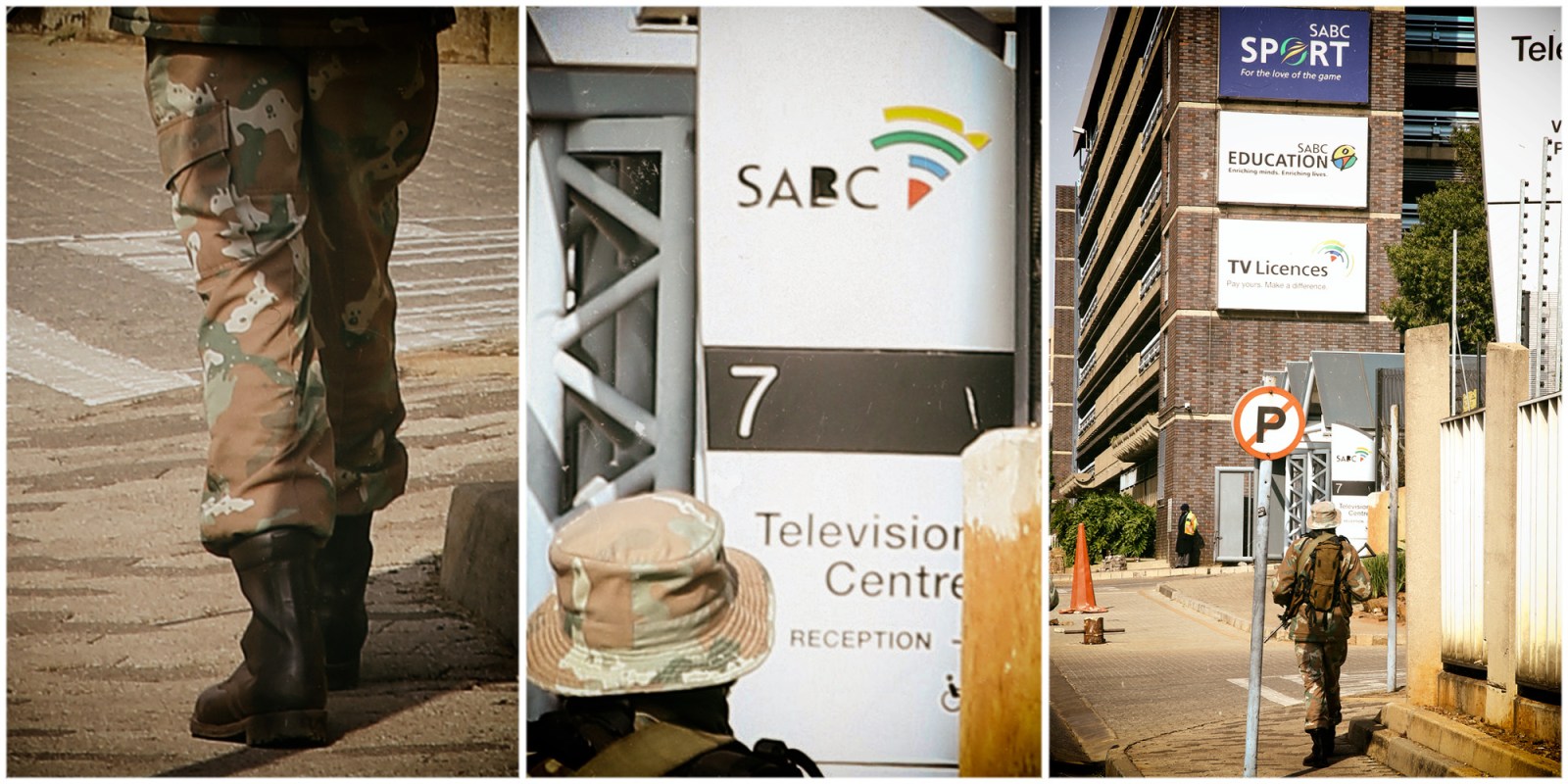 The SABC’s contradictory response to allegations of armed SANDF members entering the newsroom has raised concerns about potential threats to the broadcaster’s journalistic independence and the public’s trust in the institution.

The third floor is a nerve centre of the SABC’s news division and the SANDF’s presence has raised concerns about potential threats to the broadcaster’s journalistic independence and the public’s trust in the institution.

“While the SABC has no evidence that any SANDF personnel were in the newsroom, the public broadcaster would like to make it clear that any presence by the SANDF in the newsroom would be unacceptable and not in line with the SABC’s public mandate and editorial policies,” she said.

SABC chairperson Bongumusa Makhathini called on staff to provide evidence that soldiers had entered the newsroom, saying that “if such happened it will need to be properly investigated” – which suggests an investigation is not currently under way.

However, Makhathini did suggest members of the military may have entered the building to make plans in case of an emergency.

“They may have been walking around because for them to be able to guard these premises, they needed to be clear about all the exits. And it is an operational matter. And if there’s any evidence of soldiers on our studios, I would like to see that,” he said.

In an SABC report, staff members contradicted the chairperson’s claim that there was no evidence of soldiers in the newsroom.

The SANDF was deployed to the SABC’s headquarters, a national key point, in July following the unrest and looting in the two provinces. Daily Maverick has been told that neither the leaders of the broadcaster’s news department nor staff were informed of, or consulted about, the deployment.

Furthermore, staff were not told ahead of SANDF members being present in the newsroom and some said they were shocked and concerned by the sight of armed members of the military in their workplace.

When members of the executive, including the President, visit the SABC for interviews, their security teams either check in their firearms or may not display them openly, Daily Maverick was told. In contrast, the soldiers who were spotted on level three were in uniform and carrying rifles.

Phathiswa Magopeni, group executive of news and current affairs at the SABC, said spokesperson Ntuli was the only person authorised to speak about SABC matters.

South African National Editors’ Forum chairperson Sbu Ngwala said: “While the SABC is a national key point, we frown upon the presence of members of the SANDF inside the newsroom. If the army needed to protect the institution, why would they come into the newsroom when the threat is outside?

“We are also concerned that they were deployed with no explanation or prior warning to staff. The SABC should have expected that the SANDF deployment will be viewed as a sign of intimidation, especially since it happened a few days after staff at the SABC raised concerns about the problematic surveillance clause in their employment contracts.”

The SABC recently removed a clause in its employees’ contracts that gave it the right to intercept, monitor and read all communications by staff. The broadcaster said journalists’ sources were adequately protected under its editorial policies but the clause was removed to avoid misunderstandings.

“We also come from a history where the public broadcaster has had other incidents where state intelligence ‘swept’ offices and staff were threatened that their phones were being bugged,” said Ngwala.

The SABC has a history of political interference. It was a key part of the apartheid machinery, using propaganda to defend the state. More recently, former SABC chief operating officer Hlaudi Motsoeneng tried to censor coverage of the EFF ahead of the 2014 elections and ordered journalists to limit coverage of violent protests, purging opponents who disagreed with him.

A 2019 report on interference in the SABC’s news division described it as “an organisation crippled by pain, anger and fear; by frustration, anxiety and apathy; and by inattentiveness, detachment and helplessness”.

While examples of interference were seen as aimed at promoting the ANC or individuals within the party, the report’s author, Joe Thloloe, said there was no clear line to decisions from Luthuli House. Although, he described the “spectre of the ANC” as hovering over the newsroom.

Media Monitoring Africa director William Bird said it was still not clear what had actually happened at the SABC recently. He said it was curious that no staffers had taken pictures of the troops in the newsroom, and that more SABC members hadn’t spoken out publicly.

Bird said it would be “completely and utterly unacceptable” if troops entered the space where journalists work. The SANDF “have no legitimate business whatsoever going into the newsroom”. He said an investigation should follow if it’s proven that soldiers entered the newsroom.

Broadcasting, Electronic, Media & Allied Workers Union president Hannes du Buisson was quoted as saying: “That easily could create the impression that government or the SANDF are watching you, as journalists. You don’t have to say anything, your mere presence there totally out of place, totally unwarranted, unjustified, being in the public broadcaster building armed with rifles, totally out of place. All of that has certainly created the impression that we are not free, we are not independent, we are watched by Big Brother.”

The SANDF’s presence at the SABC also follows a divisive fight over retrenchments at the broadcaster, in which some journalists publicly criticised management for a move they argued would weaken its ability to perform its mandate of informing the public.

Former economics editor Thandeka Gqubule-Mbeki publicly opposed the retrenchments. Years earlier she was one of the “SABC 8”, employees who were fired for standing up against Motsoeneng’s order not to air footage of violent protests.

Gqubule-Mbeki resigned from the SABC in April 2021 over alleged governance and policy violations and “tolerance for outright fraud and corruption” while she was facing disciplinary charges for allegedly intimidating a colleague.

“What happens to journalistic objectivity when the rulers have a gun in the newsroom?” Gqubule-Mbeki commented this week.

“What happens to the public’s voice? It’s diminished.” DM