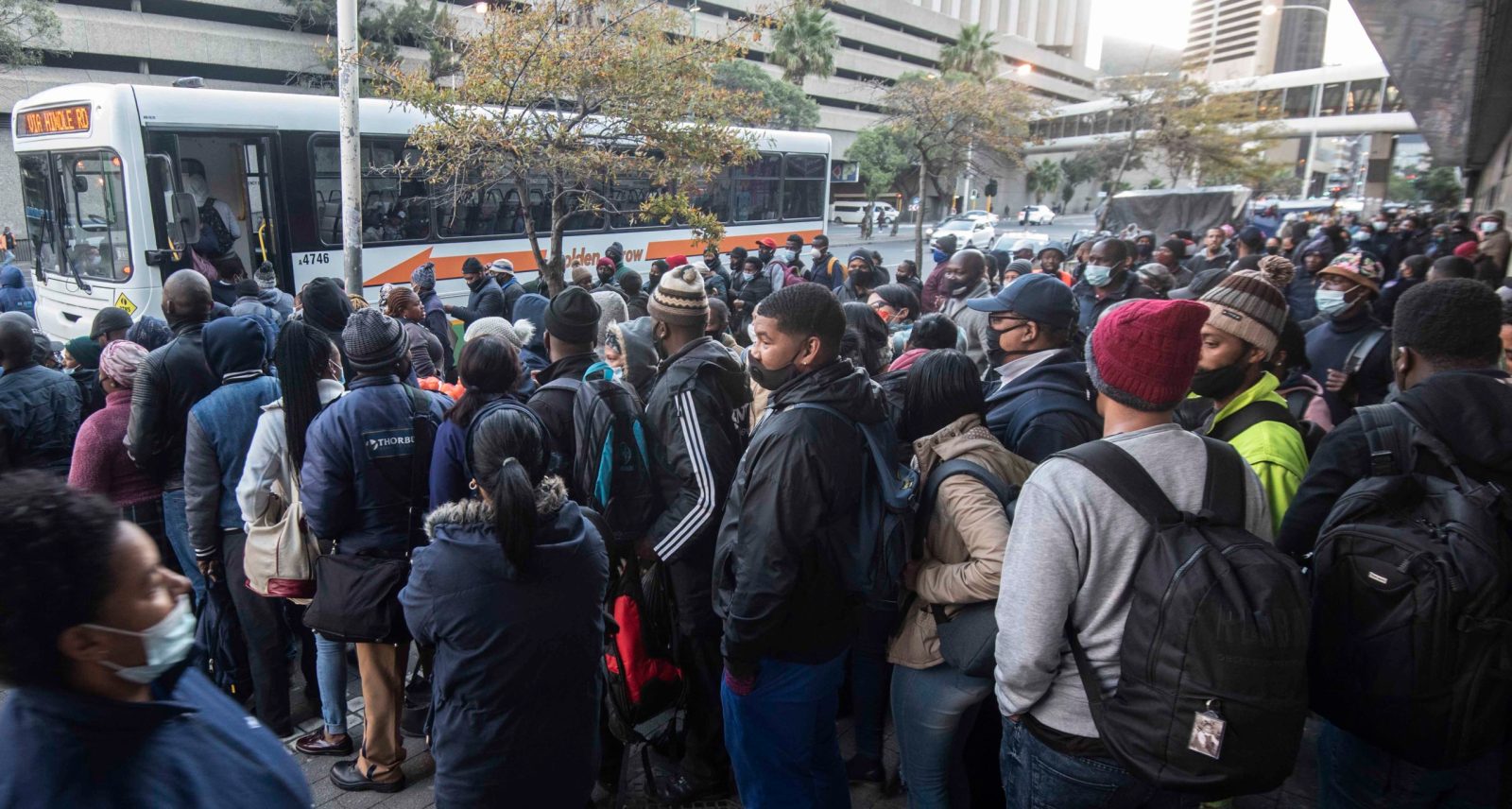 Commuters waiting in the Cape Town CBD for a bus home as taxi violence forces them to seek alternative transport. (Photo: Brenton Geach)

‘I appeal to the minibus taxi industry to put the commuter at the centre of the dispute,’ says Western Cape transport MEC Daylin Mitchell as residents face yet another day of limited taxi services.

There has been a stalemate in negotiations between rival taxi associations in Cape Town, said government authorities on Thursday, 22 July.

This means there is little relief for commuters who have been struggling to get work and home for the past few weeks. Talks, facilitated by national and provincial government, have been ongoing between the Cape Amalgamated Taxi Association (Cata) and the Congress of Democratic Taxi Associations (Codeta).

The taxi violence forced Golden Arrow Bus Services to reduce its operations to 40%, leaving about 100,000 commuters stranded. It was reported late on Wednesday that disruptions were being minimised, with authorities alerting on Thursday afternoon that 80% of operations had resumed.

At the heart of the taxi dispute is the B97 route between Mbekweni/Paarl and Bellville. The provincial transport and public works department facilitated a mediation process between the two associations from last Friday until late on Wednesday.

Meanwhile, commuters have been struggling with limited taxi operations, limited buses and even fewer trains.

Cata confirmed to Daily Maverick it would not operate on Thursday.

The same day, Transport Minister Fikile Mbalula and Western Cape transport and public works MEC Daylin Mitchell briefed the media from Parliament on the latest round of talks between the taxi bodies.

“We are still at a stage where there is no official agreement,” said Mitchell, who added that the rival groups have been given one last chance to come to an agreement before an arbitration process kicks off next week to find a solution.

There have also been shootings, including that of a Golden Arrow bus driver on Monday morning in a suspected taxi-related incident. Mbalula warned that the “full might of the law would be unleashed” on those involved in the shootings.

Last week, Winde welcomed the deployment of the South African National Defence Force to help quell the civil unrest and taxi-related violence. Mbalula said the security cluster will work with the province to determine how many soldiers are needed and for what purpose.

The minister welcomed the fact that the parties have not walked away from the mediation process and that they have agreed to a ceasefire until negotiations and the arbitration process have been completed – but “we will hold them accountable”.

Alternative arrangements for commuters include speaking to the Passenger Rail Agency of South Africa about increasing train availability.

When asked by a journalist when taxis would operate fully, Mbalula said, “I cannot answer that”, and reiterated that Cata had indicated it would not operate during this period of uncertainty.

Mitchell added that “120,000 commuters are being held hostage by a criminal few”.

In a statement later on Thursday, Mitchell’s office provided the following update, pointing out that the situation was fluid and subject to change:

The latest violence has prompted the South African Human Rights Commission to call for “all parties to continue with engagements aimed at finding common ground and a peaceful resolution to the dispute”. In a statement, it also appealed to the business sector and employers in particular, “to understand and exercise tolerance with the plight their employees face”. DM