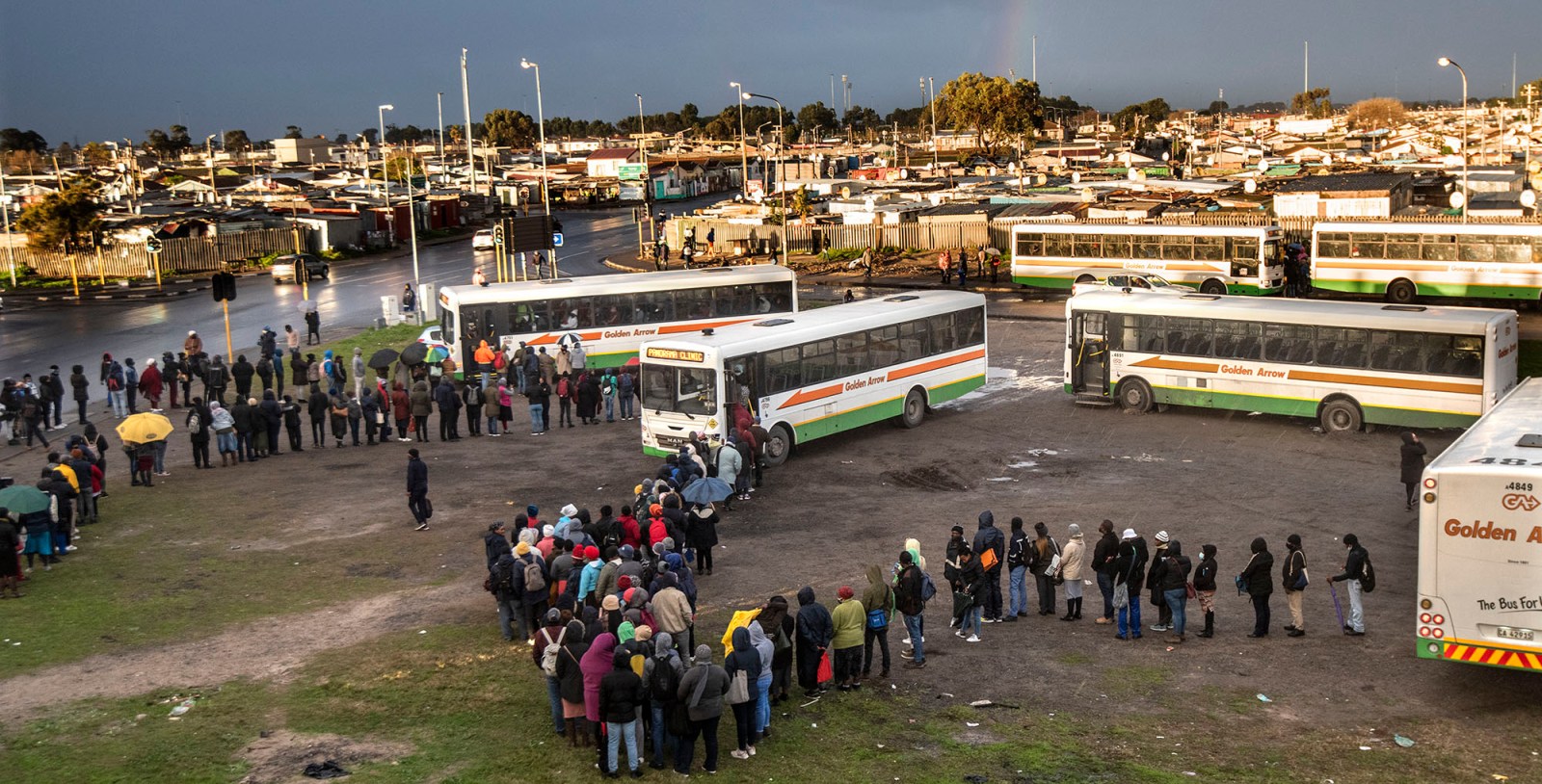 Golden Arrow buses stop alongside the N2 at Borcherds Quarry, near the entrance to Nyanga, to pick up workers who stood in long queues in the rain from early morning amid taxi violence on 21 July 2021. Golden Arrow suspended its services in some areas after a driver was shot in the mouth. (Photo: Gallo Images/Brenton Geach)

Golden Arrow Bus Services spokesperson Bronwen Dyke-Beyer said the company was operating about 50% of its buses on Wednesday morning and by Wednesday night hoped to reach above 60%.

If the taxi violence continues, thousands of learners will be left stranded when schools reopen on Monday, 26 July.

This was a fear expressed on Wednesday by Western Cape Education Department spokesperson Bronagh Hammond.

Learners have been at home for the past four weeks after the announcement by President Cyril Ramaphosa on 27 June that South Africa was moving to Level 4 lockdown.

Hammond said the department was monitoring unrest in the taxi industry and its effects on public transport.

“Our schools will reopen next week. However, if public transport continues to be affected, learners and some educators will be affected, especially learners who attend what we call commuter schools.

“This is extremely sad and concerning and we hope that it will be resolved soon so that our children can continue learning,” said Hammond.

Taxi associations Cata and Codeta have been locked in a taxi war for the past week, with more than 80 people killed in shootings since the beginning of the year.

The wave of violence has wreaked havoc in Cape Town and forced Golden Arrow Bus Services to reduce its operations to 40%, leaving 100,000 commuters stranded.

But there has been an improvement in the Golden Arrow service since the SA National Defence Force joined the police in patrolling hotspots where shootings have occurred and Golden Arrow buses have been torched. The most affected area is Nyanga, currently a “no-go zone” for buses.

Golden Arrow spokesperson Bronwen Dyke-Beyer said the company was operating about 50% of its buses on Wednesday morning and by Wednesday night hoped to reach above 60%.

“We believe that this holistic approach advocated by the premier [Alan Winde] and MEC is already creating a vastly safer operating environment. We believe that these interventions will assist in normalising our operations in the coming days,” Dyke-Beyer said.

In Atlantis and surrounding areas, there was also some good news when taxi unions allowed private taxi drivers to ferry passengers who had received their vaccines at Saxonsea Civic Hall.

On Tuesday, during a virtual meeting, Winde had talks with Richard Walker, regional manager of the Passenger Rail Agency of South Africa in the Western Cape, about the resumption of the ailing rail system.

But Riana Scott, spokesperson for Metrorail Western Cape, said uncertainty over staff attendance with regard to opening stations and operating trains made it “very difficult” to plan services — a significant number of employees rely on public transport.

“We are still recovering from an unprecedented Covid-19 incident which prompted a suspension of services last Friday. Although facilities have been disinfected, more than 20 train crew and operations staff are still in isolation.

After the virtual meeting, Winde said, “On Wednesday night, 60% of [the Golden Arrow] fleet, or approximately 600 buses, will be brought online, which is an increase from 40% of their fleet. I made it clear that ensuring the safety of public transport operations is my top priority and that SAPS has significantly increased their presence to ensure that violence is prevented.”

Safety MEC Albert Fritz said there had been no incidents of taxi-related violence overnight and on Wednesday. There had also been a significant increase in SAPS members and law enforcement at hotspots.

“We welcome the calm. Our residents deserve nothing less. It really upsets me that our citizens are not able to do the most basic things, like travel to work without worrying about being caught in the crossfire.

“We are already seeing the benefits of the significant SAPS response and we need to keep up the good work. We now also need many more arrests so all those responsible for this violence end up behind bars,” Fritz said. DM/MC