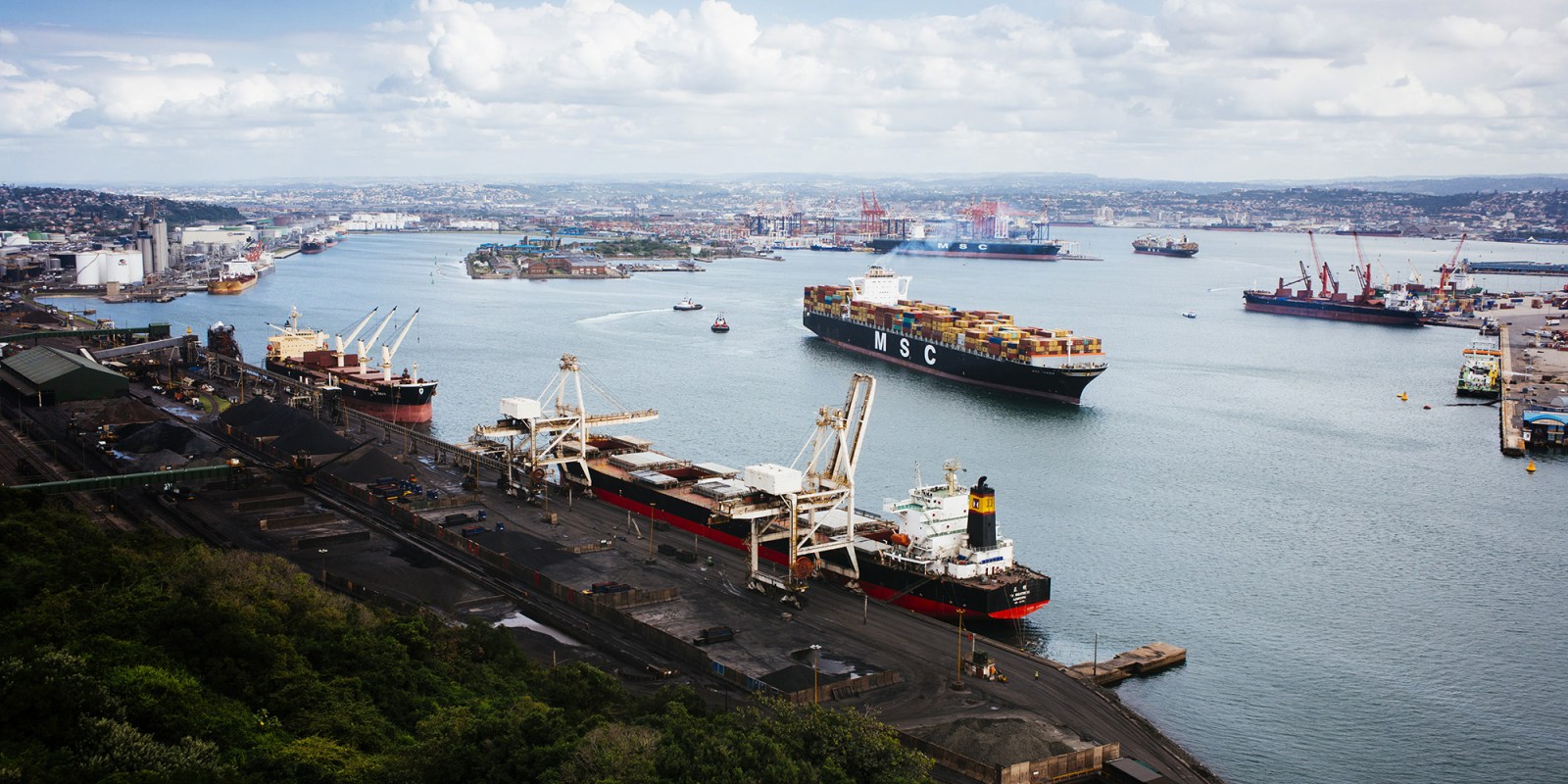 Shipping containers sit on board cargo ship Ivana, operated by Mediterranean Shipping Co. (MSC), center, as it departs from the Port of Durban, operated by Transnet SOC Holdings Ltd.'s Ports Authority, in Durban, South Africa, on Friday, May 25, 2018. According to research Africa’s participation in the shipping industry remains hindered by the continent’s low fleet ownership. (Photo: Waldo Swiegers/Bloomberg via Getty Images)

Trading under the African Continental Free Trade Area (AfCFTA) agreement started on 1 January 2021, a significant milestone for Africa’s political and economic aspirations. The deal created an enormous single market, uniting 1.2 billion people across 54 states with a combined GDP of $3.4-trillion.

The standard expectation would be that AfCFTA trading — taking place on a continent of few islands and many landlocked states — would happen mostly by rail, road or plane. In fact, the first goods traded under the AfCFTA regime were carried by ship from a Ghanaian cosmetics company to Guinea on 4 January.

AfCFTA interconnectedness is needed to drive economic growth and development across the continent in the coming years. Africa’s maritime industries and actors will be vital in achieving this outcome, as sea transport offers the cheapest and fastest way of moving the largest quantity of goods across long distances.

Even for Africa’s landlocked countries, trade depends primarily on maritime gateways. Other types of freight are typically more expensive, less efficient and less reliable due to the generally underdeveloped railway and highway systems on the continent.

Reaching an Africa-wide consensus on such a complicated matter is an essential first step. The World Bank estimates that AfCFTA could boost continental income by up to $450-billion, and lift close to 30 million people out of extreme poverty. Yet the success and results of the initiative depend entirely on African states’ ability to increase the efficiency, capacity and safety of their maritime transport systems.

African decision makers must prioritise the expansion and improvement of the continent’s maritime transport infrastructure, which struggles to deal with the current level of import and export. The development of port infrastructure in most African countries lags behind the rest of the world — only three African ports are featured on the 2020 list of top 100 global container ports.

High freight rates, poor turnaround time in cargo clearance, and inadequate storage capacities are just some of the many problems that strain African ports’ competitiveness. The World Bank estimates that most sub-Saharan African ports exceed 20 days on average cargo dwell time, compared to a dwell time of three to four days in major global ports.

Historical intra-African trade levels have been low, and in 2017 were estimated at only 16.6% of total continental trade, dropping to 15% in 2019. As a result, countries focus on outward export of raw materials and commodities, and most inter-African trade occurs within the economic regions, but to a lesser extent between regions.

Given these low figures, the precise percentage of intra-African trade presently carried through ports and by ships is unclear but is probably tiny. Yet because it remains the cheapest and fastest way of moving the largest amount of goods, it presents Africa with a golden opportunity.

Increased shipping levels will mean a greater need for safety at sea to monitor, control and direct maritime traffic. Most inter-African maritime trade will probably either be transported along the coastline or would need to pass near hotspots where coastal instability poses costly risks. African countries therefore need to ensure the security of their maritime domains.

Currently, much of the AfCFTA’s focus seems to be on negotiations concerning the rules of origin for trade goods and scheduling of tariffs. Yet this is just one of the four outlined objectives. The agreement’s ultimate aim is to increase economic relations between African countries and outside of the traditional regional/customs unions.

But there cannot be a single continent-wide market without good logistics, and the maritime sector already ensures safe passage of around 80% of goods traded in Africa. The operational inefficiencies affecting the African port sector must therefore be solved urgently.

According to a report published last year by the Africa CEO Forum and Okan, investment in African ports reportedly reached more than $50-billion in 2019. Yet just three countries — Egypt, Morocco and South Africa — handle 51% of goods transported by sea in Africa. The others, including large economies such as Nigeria, suffer from a crippling lack of capacity to increase both bulk and containerised cargo handling.

Urban populations are rising, especially in coastal megacities such as Lagos and Dar es Salaam. As a result, demand for goods typically shipped in containers by large carriers is expected to soar.

An African single market would be impractical unless it developed infrastructure that could accommodate larger vessels and more containers. Most African countries continue to export mostly bulk commodities such as oil, precious metals and raw agricultural products. At the same time, intra-African trade is dominated by the exchange of manufactured and processed products.

Africa’s participation in the shipping industry remains hindered by the continent’s low fleet ownership. United Nations Conference on Trade and Development estimates show that only Nigeria features among the top 35 owning nations with a share of 0.31% in deadweight tonnage as of January 2020. Only Liberia makes the list of top flag states with 13% of the total world deadweight.

This means that Africa would have to seek the help of foreign-owned vessels in implementing AfCFTA until such time that African-built, -crewed and -owned vessels finally carry African-made products all over the continent and the world. DM

This article is funded by the Government of Norway.