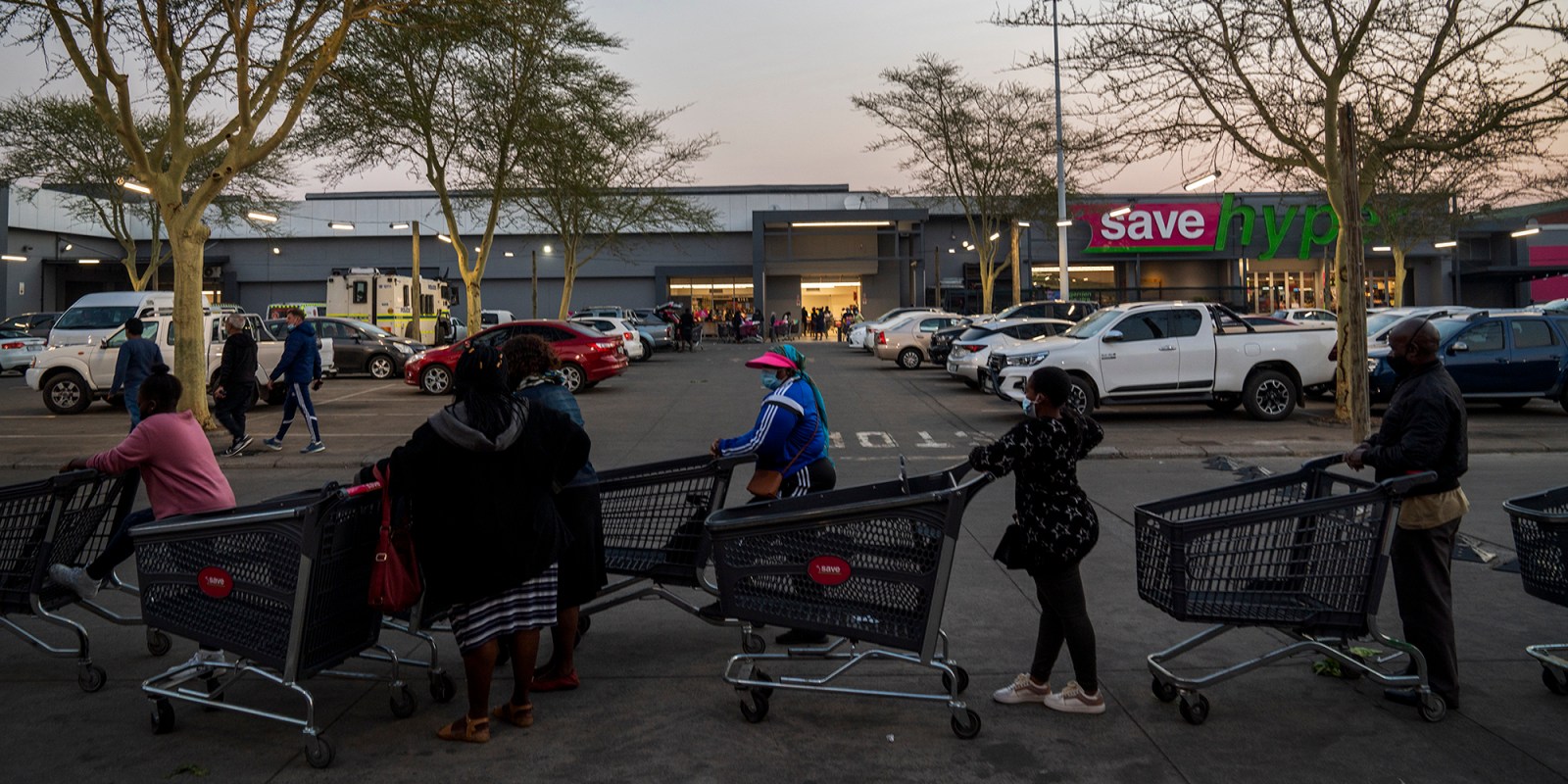 People with shopping trolleys line up and wait to enter a wholesaler to buy essential items in the Pietermaritzburg CBD on 15 July 2021. (Photo: Shiraaz Mohamed)

After more than a week of violence and destructive lawlessness, South Africans in Gauteng and KwaZulu-Natal have spent the weekend cleaning up and rebuilding what was destroyed. In the aftermath, law enforcement have directed their attention to recovering looted property and arresting the instigators of the violence.

Minister of Police, Bheki Cele visited businesses and shopping malls that have been affected by the looting, in Durban and Pietermaritzburg on 19 July.  The purpose of the visit was to monitor and maintain law and order in KwaZulu-Natal and ensure calm has been restored to the affected communities, SAPS said in a statement.

Cele spent the weekend engaging with community members in Phoenix, Bhambayi and Zwelisha in KwaZulu-Natal.

On Saturday, Cele said he had increased policing in Phoenix, northwest of Durban, to improve safety and end vigilante acts.

“80 public order police officers have been deployed to assist local police and work together with members of the South African National Defence Force, to keep all residents and property safe,” read a statement.

A team of 10 detectives had also been assembled to investigate the deaths of 20 people killed in Phoenix, as well as the alleged involvement of local SAPS members and private security operations’ involvement in violence in the area.

While tensions continue to simmer in parts of KwaZulu-Natal, calm has been restored to much of Gauteng since the South African National Defence Force (SANDF) was deployed on 12 July.

The deployment of 25,000 SANDF members across the country is effective until 12 August 2021, at an estimated cost of R615-million.

Addressing the media on the sidelines of a community engagement in Sea Cow Lake, Durban on Sunday, Cele said that three alleged instigators of the past week’s violence and looting in KwaZulu-Natal and Gauteng have been arrested. This was confirmed to Daily Maverick by Police Ministry spokesperson, Lirandzu Themba.

Two suspects, arrested on allegations of creating and circulating inflammatory messages with the potential of inciting violence, were scheduled to appear at the Randfontein and Westonaria courts, in Gauteng, on Monday. A third suspect, a 21-year-old woman who was arrested on similar allegations in Duduza, in Ekurhuleni on Saturday, will appear at the Nigel Magistrate court, on Tuesday.

The three suspects are in addition to the 12 implicated in fueling the violence, identified by law enforcement last week. Authorities have persistently declined to name the suspects until they appear in court.

Speculation has been rife with social media groups and whether Zuma-aligned State Security Agency operatives instigated the violence.

As of Sunday morning, a total of 3,407 suspects had been arrested on various charges since the violence erupted in Gauteng and KwaZulu-Natal over a week ago, the National Joint Operational and Intelligence Structure (NatJoints) said in a statement on Sunday evening.

With only one suspect granted bail, 1,122 are expected to appear in courts across both provinces, and the remaining dockets are still under investigation.

In Gauteng, 14 people, in possession of suspected looted property, were arrested over the weekend during recovery operations in hostels in Tembisa, Johannesburg, Alexandra and Moroka. NatJoints said that among the goods recovered were mattresses, television sets, couches, fridges, computer screens, laptops, groceries and clothing items.

In KwaZulu-Natal, 92 suspects were arrested over the weekend for being in possession of stolen property.

Natjoints said, the arrests and confiscation of looted items in both Gauteng and KwaZulu-Natal, are partly owing to a number of recovery operations carried out by security forces, and the influx of calls and tip-offs via the MySAPS app and to police from communities in both provinces.

#sapsHQ Search and seizure operations are yielding positive results at Beitbridge and Groblersbrug ports of entry as the looted goods are being recovered. #RejectAndReportStolenGoods #DontBuyStolenGoods TM pic.twitter.com/kPimsD87S6

NatJoints warned that those purchasing stolen goods from looters would also be arrested for being in possession of those items.

NatJoints and the SAPS are aware of messages distributed on social media platforms threatening to attack police stations, courts of law and key infrastructure as well as continued looting.

In response, NatJoints has mobilised “maximum resources to address these threats and heighten visibility,” read the statement.

No updated death toll was provided, with figures published on 16 July, stating that 212 people had been killed in the violence.

Since the outbreak of the violence, NatJoints and government officials have reiterated the call for people to refrain from circulating inflammatory messages and disinformation on social media. DM