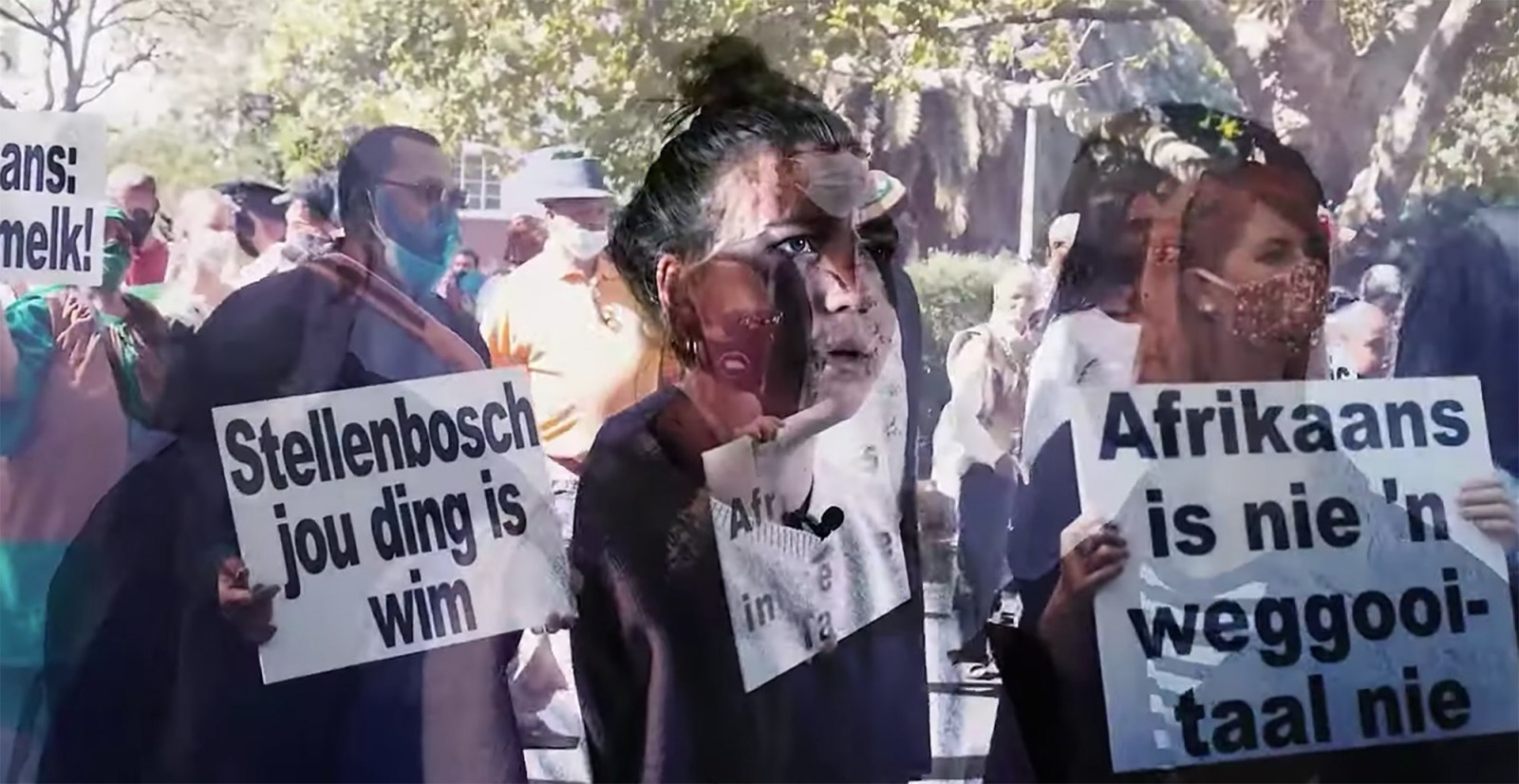 It is clear that there are many debates circulating around language at the university. More robust debate is needed within university spaces.

There has always been “an outcry” around language at Stellenbosch University, said William Sezoe, a second-year education student at the university.

“It is always a debate around Afrikaans and its position at Stellenbosch University,” said the student, wanting to return home to the small coastal fishing town of Velddrif, to teach youngsters there in Afrikaans.

Sezoe was one of the five Stellenbosch University students who recently appeared in a documentary sharing some categorical experiences of language exclusion, specifically the infringement of Afrikaans, stemming from an allegedly loosely applied language policy.

The documentary speaks largely to the Afrikaans-speaking students’ experiences of a mainly English approach to instruction at the university, and in some cases this trickling down to residence corridors.

Its release in June is one of the developments of an on-going language debate  at the university, after alleged incidents of a prohibition on Afrikaans at the university came to the fore in March.

Since these came forward, the university initiated two investigations into the allegations and the South African Human Rights Commission launched its own investigation, where a series of hearings have been held since May.

The university’s investigations, one of which was done via an independent body, found that no instruction was given to prohibit the use of Afrikaans by management and that some allegations were unfounded. The university appeared and reiterated these findings before the commission on 10 May.

While the commission’s inquiry is still underway, it was revealed at the hearings that some allegations were cases of miscommunication or misinterpretation. But some of the allegations heard were unknown to the university leadership who appeared before the commission again in June.

The commission is still receiving input from affected students, according to Gushwell Brooks, spokesperson for the commission.

The documentary spotlights deviation from Afrikaans instruction, inconsistent with the university’s current 2016 language policy — which is under revision. Its second draft will be released at the end of July.

While the current language policy stipulates that English and Afrikaans are the university’s languages of tuition, it further calls for three different kinds of specifications to accommodate its student cohort.

The language policy at the university has changed over the years, from being Afrikaans only, to 50% English 50% Afrikaans, to its current state, and in revision.

The most recent experiences are heard in the documentary Listen – a reference to the title of another widely spread documentary called Luister (Listen), released six years ago.

The documentaries’ shared title evidences the recurring pattern of the language outcry at the university.

The 2015-documentary came out at the time of the Fees Must Fall Movement and foregrounded the experiences of African students at the university, who were bearing the brunt of the university’s 2014-language policy — 50% Afrikaans and 50% English. This saw protests, spearheaded by the student pressure group Open Stellenbosch, against what it perceived as the presence of exclusionary Afrikaans culture.

According to Unopachido Mubaiwa, a master’s student in research psychology at the university, the issue is not around the Afrikaans language.

She said, “the problem has been when there is an explicit prioritisation of the Afrikaner culture as a means to preserve Afrikaans culture within the different spaces that we find ourselves in Stellenbosch…by wanting to hold highly Afrikaans culture and Afrikaans tradition and all these legacies… you are doing [it] at the expense of other cultures that exist in this space.”

This is even more so for a university that has branded itself as dedicated to promoting multiculturalism, she said. “You can’t promote multiculturalism when there is a clear prioritisation of Afrikaans language and Afrikaans culture.”

These tensions go far back, emanating from a university still transitioning and distancing itself from its historic legacy of apartheid. Notorious figures including DF Malan, Jan Smuts, HF Verwoerd, JBM Hertzog — who are considered to be bastions of apartheid ideology — were alumni, professors, and chancellors at the university.

Some measures introduced to transform the university comprise its changing student cohort and staff — including former public protector Thuli Madonsela, who holds the law faculty trust chair in social justice at the university — an ongoing visual redress programme, and also, a language policy.

“We know that a lot of those [historical problems] originated from this university and that is baggage that we have to deal with on a day-to-day basis — less and less, but it is definitely on the agenda,” said Dr Leslie van Rooi, the senior director for social impact and transformation at the university.

“So, we do not have the luxury to only listen to one language community.”

But, “including the one doesn’t mean excluding the other,” said a law student at the university, who appeared in the Listen documentary but asked to remain anonymous.

According to Albertus Liebenberg, an honours student, who also featured in the documentary, the most recent language issues have been building up.

“There have been [students] who have been unhappy with how [the language policy] has been applied since 2016,” said Liebenberg.

The two students argued for the importance of mother tongue education in Listen, saying that their exposure to mainly English instruction, alongside poorly translated Afrikaans notes and test scripts, had grave consequences for their academic performance at the university.

This was also the gravitas of Sezoe, who has appeared frequently in the media commenting on what the current language debate means for coloured Afrikaans speakers.

“Although there are two ethnic groups that both speak the language — one group was not allowed to study at [Stellenbosch University] because of the colour of their skin,” said Sezoe, in a recent News24 opinion piece, maintaining that the Afrikaans mother-tongue education must be nurtured, so that the previously disadvantaged community could now benefit.

It is clear that there are many debates circulating around language at the university.

Van Rooi listed: success and access to university education; culture; history; victimhood; and even a bit of identity politics from all sides.

But putting the far-reaching ends aside, at the centre of these tensions is identity, a national issue that South Africans still grapple with, he said.

“It has always been an identity-related debate.”

And, language is the “most sensitive tool to understand something about identities and belonging,” he said.

“In the middle is a public institution that must make sure that we service as many students in public interest and in the benefit of the country at large, not only a region or a section,” said Van Rooi.

In the same way, one student doing his honours in international relations, and who asked to also remain anonymous, said that the current debate reveals a national dilemma that South Africa finds itself in.

“It reveals a larger debate of what it means to be South African and how these different identities that we find in South Africa interact with each other. This language debate is one area in which that context plays out,” he said.

He cautioned that the current language tensions were immediately labelling people into groups of Afrikaans and English, causing a kind of “tribalism”.

“What [is] seen with Luister and now the second documentary is that students have a need to create spaces outside of the university channels with which to drive their topics and opinions of what they want to speak about,” he said.

More robust debate is needed within university spaces, he said.

“People don’t always know what to do with this topic of multiculturalism and how do we create it and how do we engage with it if there are so many different agendas being pushed onto one university.” DM

A shorter version of this story first appeared in our weekly Daily Maverick 168 newspaper which is available for free to Pick n Pay Smart Shoppers at these Pick n Pay stores until 24 July 2021. From 31 July 2021, DM168 will be available for R25 at Pick n Pay, Exclusive Books and airport bookstores.