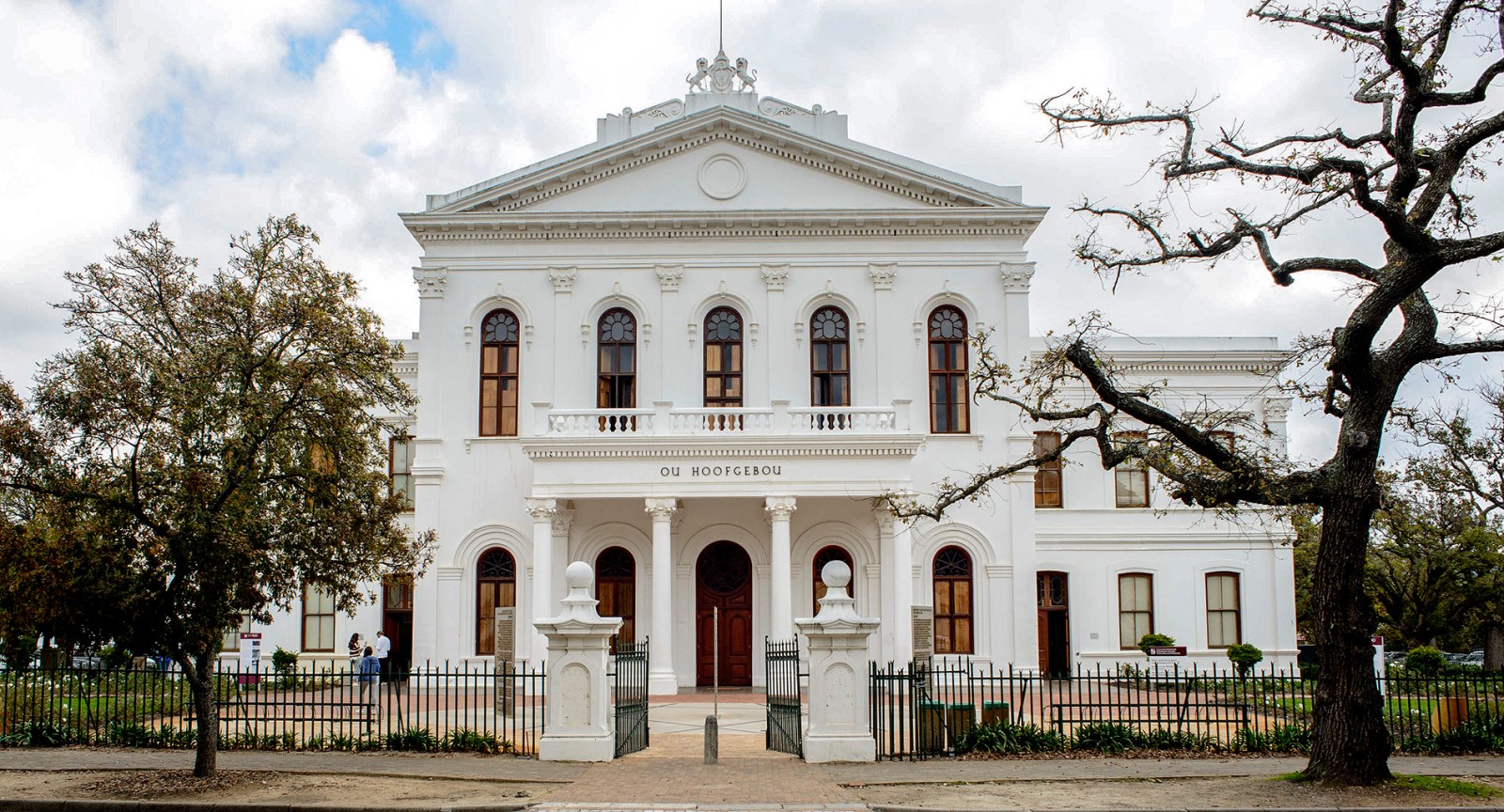 Matthew du Plessis, of the South African Human Rights Commission noted that there was a clear disparity between 'two seemingly well-justified positions' in the language tensions at Stellenbosch University. (Photo by Gallo Images/ER Lombard)

Deep-seated language issues at Stellenbosch University are popping up again as the SA Human Rights Commission continues a probe into allegations that Afrikaans in some residences has been prohibited. Last week’s hearings were marked by vastly contrasting testimonies.

“The irony is not lost on me; maybe we are dealing with something that is being lost in translation here; maybe we are dealing with something more sinister,” Matthew du Plessis, of the South African Human Rights Commission (SAHRC), said to Jethro Georgiades and Jason Reid of the Stellenbosch University private student organisation, Capri, who appeared before the commission last week.

Du Plessis noted that there was a clear disparity between “two seemingly well-justified positions” in the current language tensions at the university, and he wanted to know why.

He was on the panel at the SAHRC’s inquiry – chaired by Chris Nissen – into the alleged prohibition of the use of Afrikaans that was reported in at least four residences in March.

Several allegations were lodged to the commission by students who had said they were similarly not allowed to speak Afrikaans in their residence spaces.

What happened during March?

Earlier in 2021 it was reported that first-year students were prohibited from speaking Afrikaans in formal and informal settings during their welcoming period.

The allegations that have placed residences under scrutiny came as the university began a five-year review of its language policy – a point of controversy for the university for years (read here and here). When the university opened its revised draft policy for public comment until 12 April 2021, some political parties and Afrikaans lobby groups responded with dismay, claiming the university was phasing out Afrikaans.

The second draft of the policy will be released at the end of July.

Besides the SAHRC inquiry into the alleged prohibition in residences, the university proposed an internal investigation alongside an independent one conducted by Deloitte.

According to a 14 June email to students from Professor Deresh Ramjugernath, the deputy vice-chancellor for learning and teaching, the Deloitte report showed that there was no instruction from the university management or residence leadership to prohibit the use of Afrikaans and that instruction from residences to speak English, for reasons of inclusivity, was largely misunderstood or misused.

The allegations against the student communities Capri and Irene were not supported by evidence, the email stated.

On the same day that the summary of the Deloitte findings was sent, the SAHRC inquiry into the allegations continued in Stellenbosch.

The university appeared at the SAHRC inquiry on 10 May and held that there was no ban on Afrikaans in lecture halls, in residences, or anywhere else on campus.

After the hearings it was clear that at the heart of the incidents that triggered the language tensions are residence leaders trying to create an accommodating and welcoming environment for a diverse cohort of students, and Afrikaans-speaking students who feel their right to speak their mother tongue has been infringed and their language watered down.

Inclusivity or linguistic diversity is at stake.

A SAHRC report will come in due course but may take some time if the commission, which is still open to receive submissions, needs to go back to parties who submitted allegations or gave testimonies, said Nissen.

At the hearings, commissioner Andre Gaum read out an allegation directed at the leadership of Huis Francie van Zijl, a Tygerberg residence:

“The use of any Afrikaans has been completely banned from any informal and formal communication… enforced by an atmosphere of condemnation against those who accidentally revert to their mother tongue that counts for informal settings and threats of disciplinary hearings.”

The allegation, to which residence leader Cailin Thorp responded “we would never”, followed a similar pattern of allegations that were read out to the residences, including Minerva, Irene and the private student organisation, Capri.

Most of the leadership who appeared were caught unawares, listening in disbelief to the submissions to the SAHRC.

Across the board, it was said that the use of English during the welcoming programme was encouraged in the name of inclusivity, but never enforced.

If someone cannot converse in English, they speak in their mother tongue and residents help translate for understanding, said Thorp on behalf of her residence.

All residence leaders also agreed that they had no authority over what language students speak in informal and social spaces.

The head of Minerva, Mariëtha Lemmer, admitted that their house committee had not been explicit enough with first years about their full intent in encouraging English to be spoken during the welcoming period.

This had caused confusion and hurt among residents and the leadership. “The atmosphere was heavy in the koshuis [residence],” said Lemmer.

But it was later cleared up in the programme, she noted, adding that there was wrongful malice towards the house committee and its efforts.

There was agreement between the residence leadership that ample and open opportunity is made available for students to come forward with concerns.

But the allegations read at the commission were largely unknown to the leadership, except for the Minerva case.

“We were at a point where we felt scared and a bit intimidated to speak Afrikaans because we didn’t know when we should speak Afrikaans,” said first-year Minerva student Milda van Dyk, who approached the house committee and residence head.

It appears to be a case of mistranslation, but Afrikaans lobby groups and political parties argue that there must have been an issue that had upset the students.

“If there was nothing wrong here, then why this case?” said Leon Schreiber of the Democratic Alliance. “Clearly we know that something happened. Something was wrong.”

On the first day of the hearings, Verna Stuurman, director of the Afrikaans lobby group DAK Netwerk, told the commission they needed to “determine to which extent there [has] been an injustice committed to students and staff”.

“There is a particular sense that an injustice has been made – this is what we want to see investigated,” she said.

Stuurman was among other Afrikaans lobby groups, including StudentePlein, as well as the DA and Freedom Front Plus and the university’s Afrikaans and Nederlands department.

According to Schreiber, there is a problem with a policy that in its practicality unfolds in such a way that says one must speak English “so that no one ever feels left out”.

Policies are important because they render practical steps on the ground, he said.

Likewise, Frederik van Dyk, who represented StudentePlein, argued that there was a disconnection between the policy in theory and in practice.

“Management believes its policy shapes outcomes in reality… Us, Afrikaans students, only know a reality where English domination is enforced with the smile of inclusivity and the stick of fear and sociocultural shame,” he said.

Van Dyk, along with the FF Plus and the DA, argued about inconsistencies in the university’s response compared with other transgressions.

FF Plus leader Dr Pieter Groenewald pointed out the university’s “swift action” in favour of the #OpenStellenbosch movement that gave rise to a revision of the 2014 language policy – which called for tuition to be 50% Afrikaans and 50% English – within a year.

“In the case of complaints of victimisation, bullying and microaggression towards Afrikaans students, the institution dragged its feet and the issue was only given some degree of attention after extensive media coverage,” he said.

But on 10 June, rector and vice-chancellor De Villiers told the inquiry that “when the allegations came to the fore, we expeditiously started looking into them. And we took action.”

These had been dealt with internally and resolved satisfactorily.

According to Groenewald – who was also speaking in the face of allegations of political opportunism – “this issue must be approached, not through a political lens, but through a human lens within the context of a diverse and multicultural society brought forth by an extremely complicated history. Afrikaans does not belong to the FF Plus or the DA… Afrikaans belongs to the people who speak it, from the cradle and in their homes to schools, lecture halls, residence rooms, park benches and boardrooms.” DM