Part Five: How the Guptas used their loot 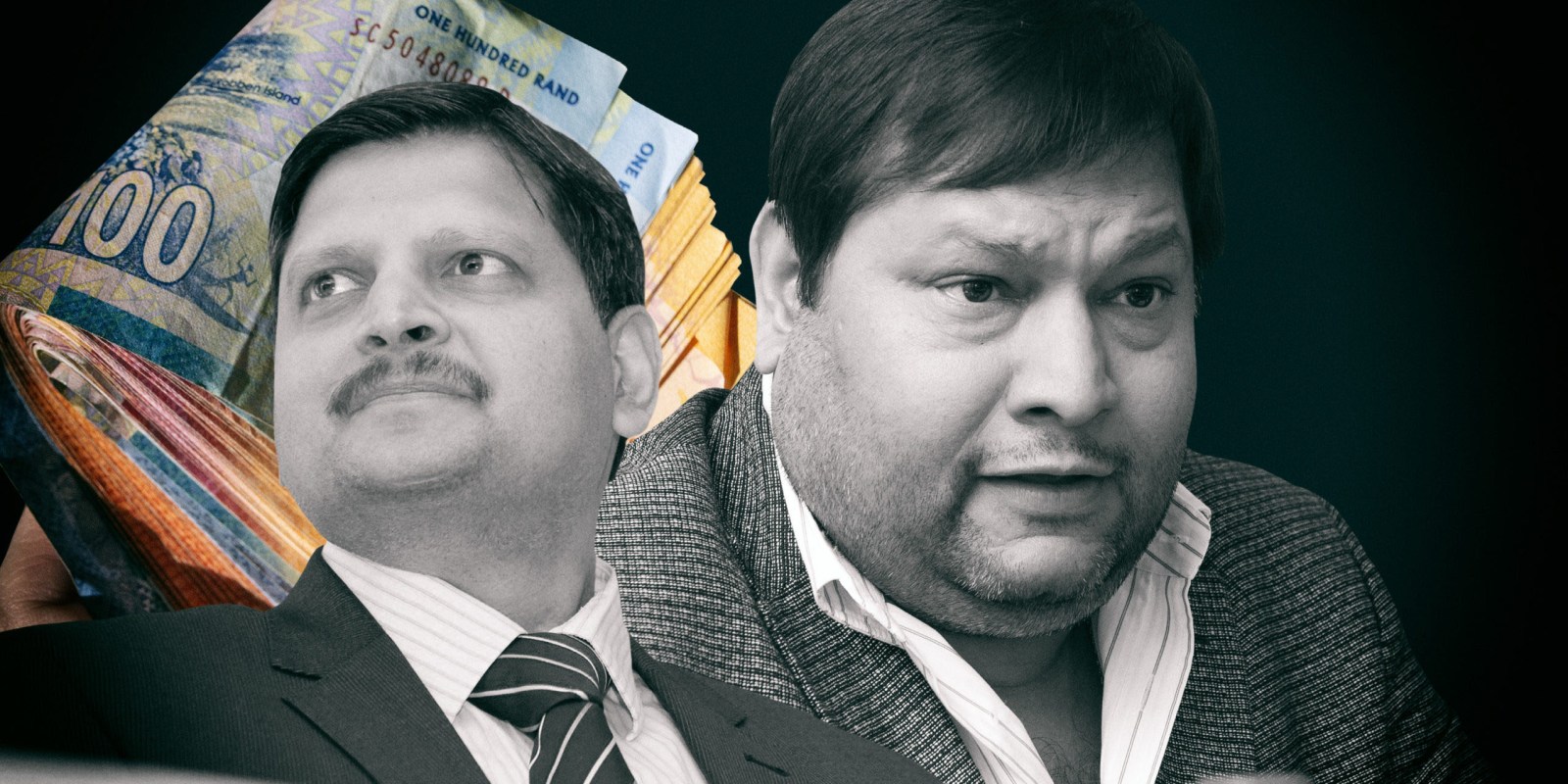 In the previous instalment, I set out how the Gupta enterprise laundered its money in South Africa and abroad, using pre-existing criminal laundries inside the country and out. Today, I’ll show how they moved some of this loot back into the country and what they used it for – to expand their local empire to take advantage of State Capture, as shown in the example of the purchase of the Gupta enterprise’s last remaining asset in South Africa, Optimum Holdings.

On 14 April 2016, Tegeta Exploration & Resources transferred R2.084-billion from its Bank of Baroda current account into the trust account of the law firm Werksmans. The transfer secured and finalised Tegeta’s purchase of Optimum Holdings from Glencore. Considerable evidence has emerged showing that Glencore only undertook the sale after pressure from Gupta-linked officials and Eskom.

To finance this, the Gupta enterprise mobilised R1.82-billion in capital that was derived from criminal and/or questionable sources. In the table below I provide a summary of these flows, but then delve deeper into two particularly notable streams: the Centaur and Albatime flows.

I have also included here a step-by-step visualisation of all of these money flows, some of which I’ll reproduce below. 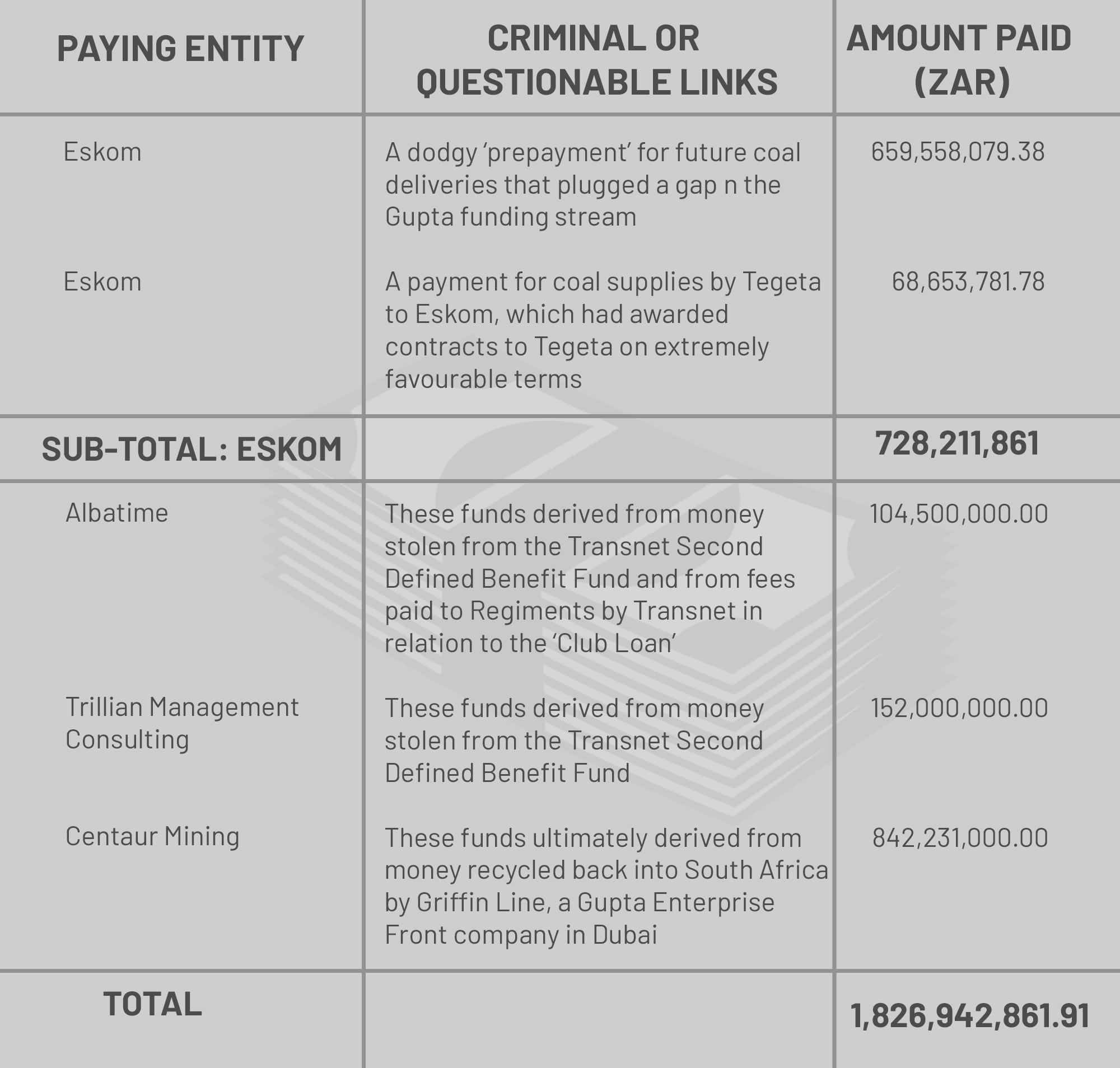 In late 2015, the Guptas opened up a new company based in Dubai called Griffin Line Trading. In one email from the #Guptaleaks, the Guptas’ chief lieutenant, Ronica Ragavan, appears to explain to Tony Gupta that Griffin Line would be controlled or represented by Kamal Singhala. Singhala is Ajay Gupta’s son. 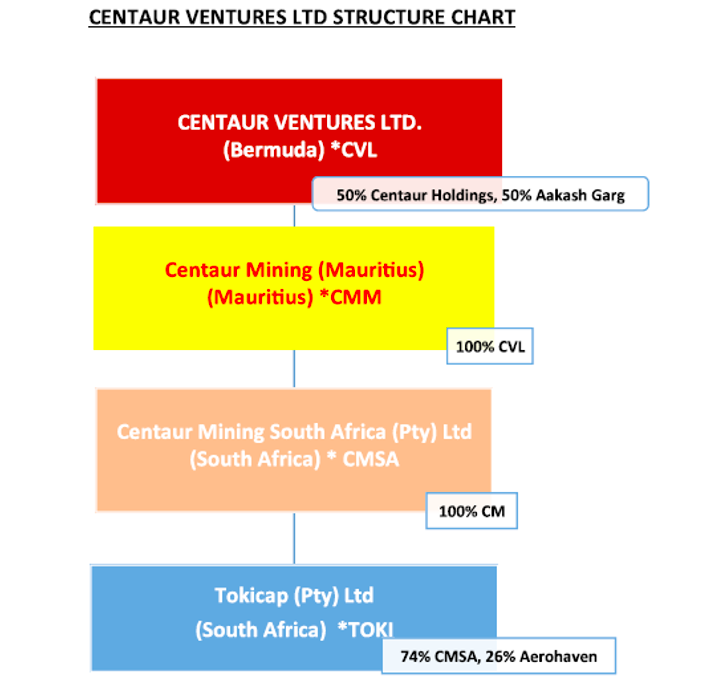 These back-to-back loans allowed Griffin Line – a Gupta enterprise company – to move the money it hoarded from questionable sources abroad, back into South Africa, without anybody being the wiser as to the source of the funds. Indeed, we only know of these back-to-back loans because Centaur and the Guptas fell out and became involved in acrimonious court battles in Bermuda, where Centaur Ventures is based.

First, between 26 February and 1 April 2016, Centaur Mining drew down (i.e. got paid) R885-million into its Standard Bank account. Between 9 March 2016 and 4 April 2016, Centaur Mining transferred this amount into its Bank of Baroda current account, where it was then transferred into a fixed deposit account on 12 April 2016. On the same day (12 April) the Bank of Baroda issued a loan worth R842-million to Tegeta Resources and Exploration. This amount was then paid to Werksmans. 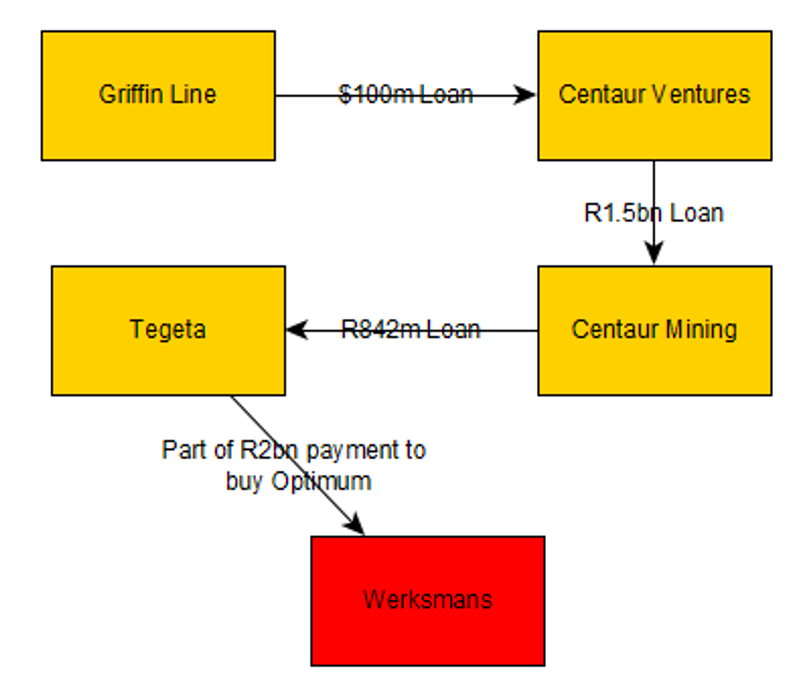 First, on 5 April 2017, Eskom paid R249-million to Optimum and Koornfontein Mine (the latter an asset the Gupta enterprise acquired when it bought Optimum). Of this, R242-million was paid into Tegeta’s loan it had taken out against the Centaur Mining fixed deposit.

Second, on the following day, Centaur Mining closed its fixed deposit with the Bank of Baroda and eventually paid the capital and accumulated interest (R905-million) back to Centaur Ventures, settling this much of the R1.5-billion loan facility.

Third, between 11 and 20 April 2017, Centaur Ventures recycled R651-million of the R905-million it had just been repaid back into South Africa. This money was deposited into Optimum Coal’s Baroda account. Of this, R470-million was paid to Tegeta, which immediately used this to pay down its mega-loan, while the remainder was paid out to various other Gupta enterprise companies.

Fourth, and finally, Glencore paid R135-million to Optimum on 26 April 2017, of which R130-million was used to pay off the Tegeta loan.

The net effect of all of the above was that, while Centaur had provided R842-million in capital, it actually only paid R470-million towards the purchase of Optimum. The remainder was made up of R135-million paid by Glencore and, most importantly, R249-million paid by Eskom.

The second stream of interest flowed via Albatime.

As noted above, Albatime sourced its funding for this tranche from both Transnet directly (R93.4-million) and Transnet’s Defined Benefit Pension Fund (R56.1-million). These amounts transited either via Regiments or Trillian to Albtime.

Albatime repeated the Centaur trick, paying R110-million of this into a fixed deposit, against which Tegeta took out a loan of R104.5-million that it used to contribute to the purchase of Optimum. 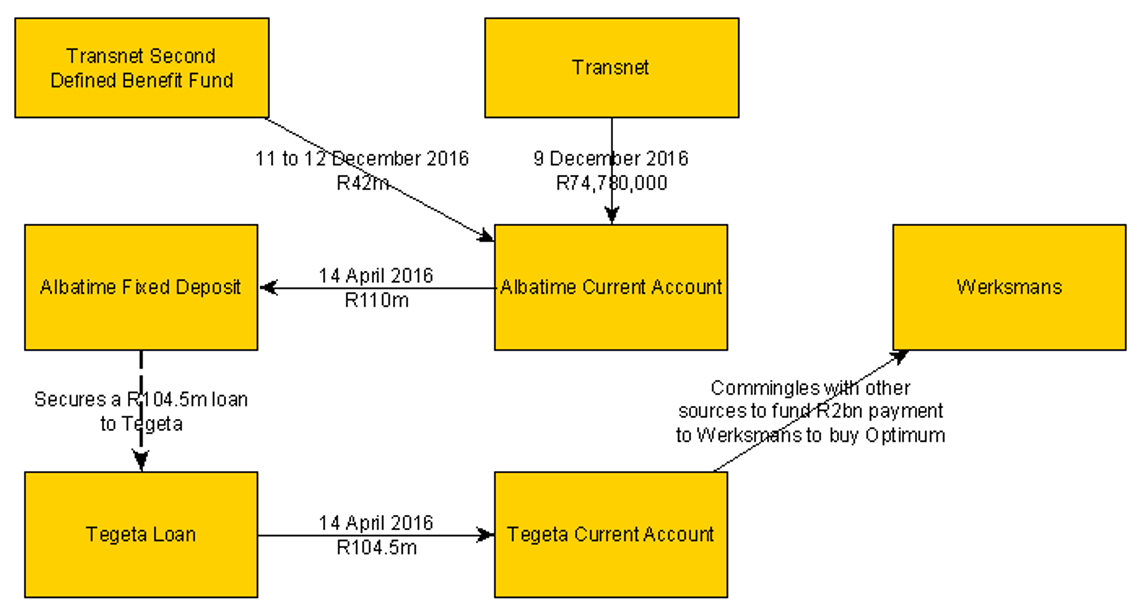 But what is particularly interesting about the Albatime portion is what happened next. On 20 April 2016, less than a week after the Optimum purchase happened, Albatime closed its fixed deposit account and paid R110-million back into its Baroda current account.

Of this R110-million, Albatime transferred a total of R26,710,400 into three first-level laundry entities: Medjoul, Fortime Consultants and Birsaa Projects.

Following this money, I’ve been able to track that $450,416 of the R26.7-million paid to the first-level laundry entities was paid via a local laundry, into two separate onshore-offshore bridges, and ultimately to Griffin Line Trading. So we have money from State Capture first being used to help the Guptas finance the purchase of Optimum, and once that objective had been achieved, portions of that same money were then paid out to a Gupta enterprise front company in Dubai. 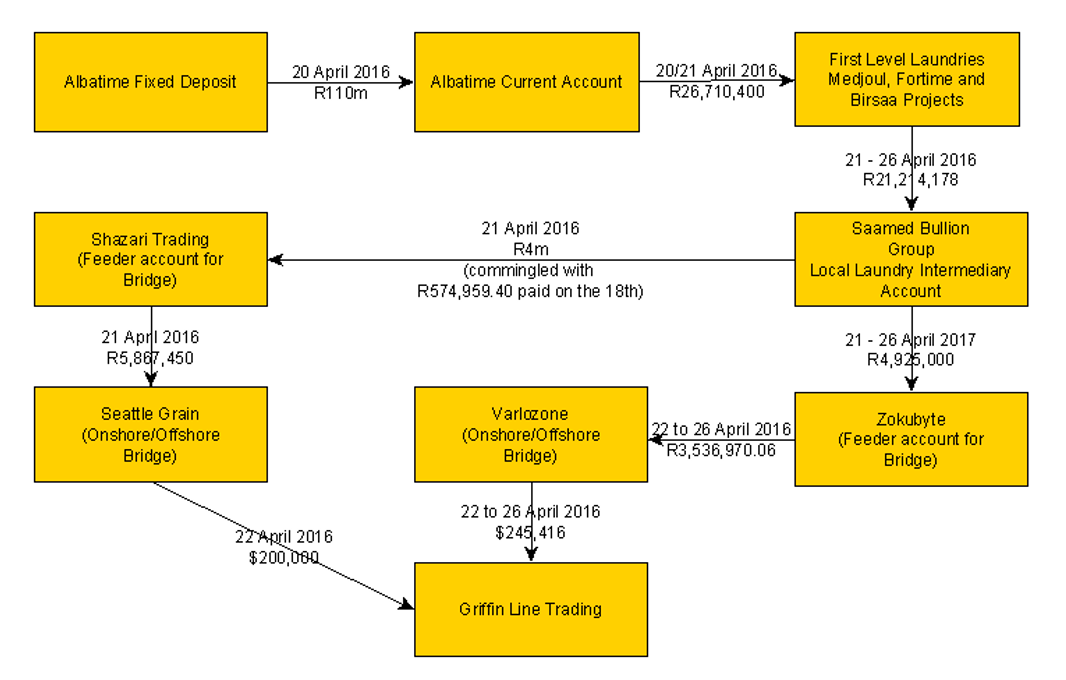 The Gupta enterprise’s financial manoeuvring meant that more than half of the actual contribution towards the purchase of Optimum was paid by the taxpayer via Eskom.

By my calculations, Eskom ultimately contributed R1,046-billion to the purchase of Optimum Holdings – all for the benefit of the Gupta enterprise. 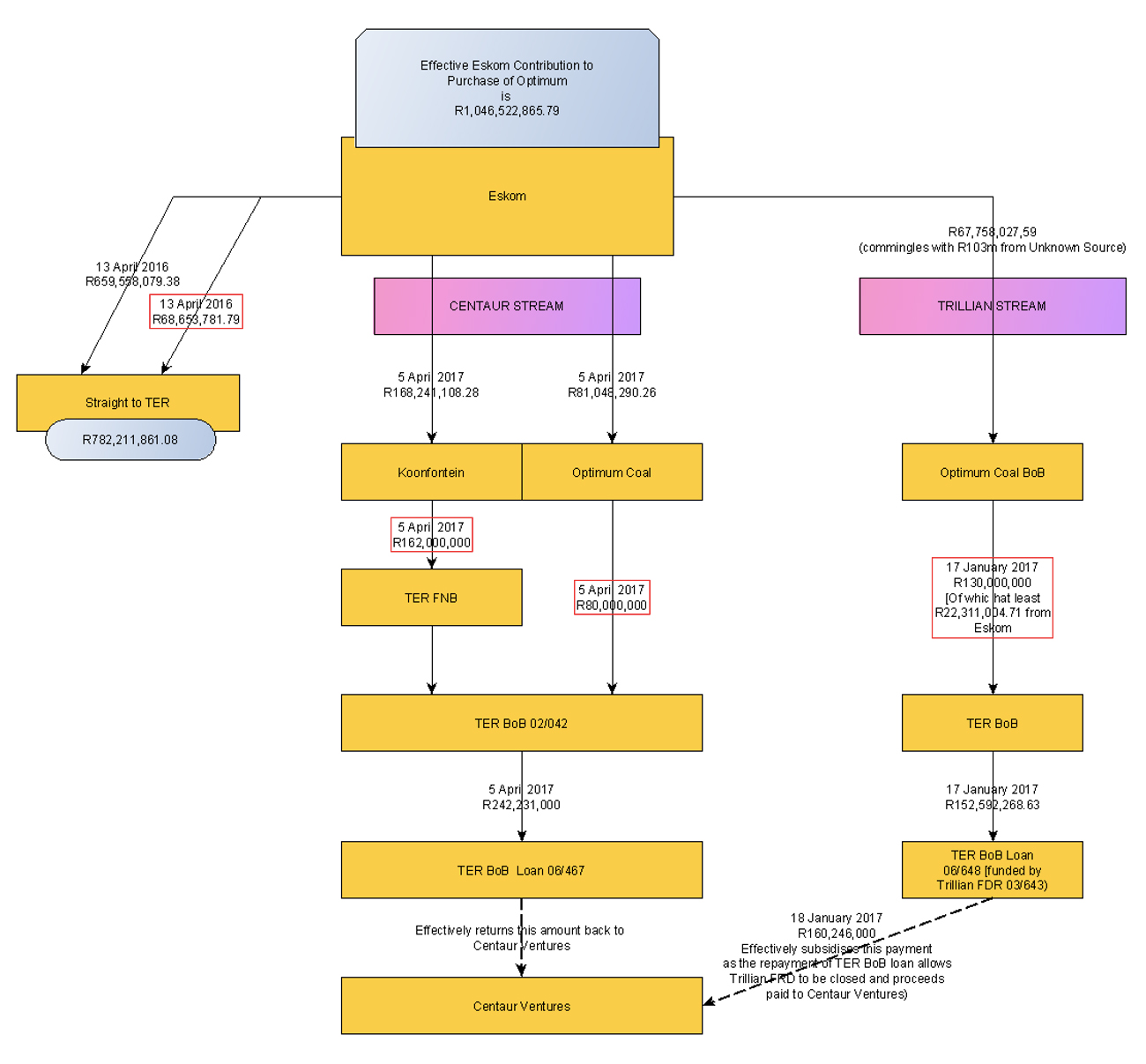 Recently, Eskom and the SIU brought a claim for damages against Optimum for more than R3.8-billion. This claim, however, is being frustrated by a complicated dispute about who has the ultimate right to Optimum, the Gupta enterprise’s last remaining asset in South Africa.

Initially, Centaur Ventures claimed that it had a claim against Optimum because of its contribution to the purchase price. This claim was then ceded to a company called Templar Capital, which is controlled by Centaur’s Daniel McGowan.

But the clearly questionable source of Centaur Ventures’ funding of the purchase of Optimum, alongside the other questionable sources used to finance the purchase, must now attract the attention of the Asset Forfeiture Unit, Eskom and the SIU. If McGowan and Templar end up controlling Optimum, or extracting any value from it, it would be a travesty.

For those who have had the patience and fortitude to read through these five explainers, I hope this has proved enlightening and worthwhile.

For those whose interest has been piqued and want to follow more, my full evidence bundle will shortly be online on the commission website. Running at more than 7,000 pages, it is, admittedly, quite a read; but I promise you that it is jaw-dropping nevertheless. DM