Olympic Games: Blitzboks to channel a ‘wild dog pack mentality’ in bid for gold in Tokyo 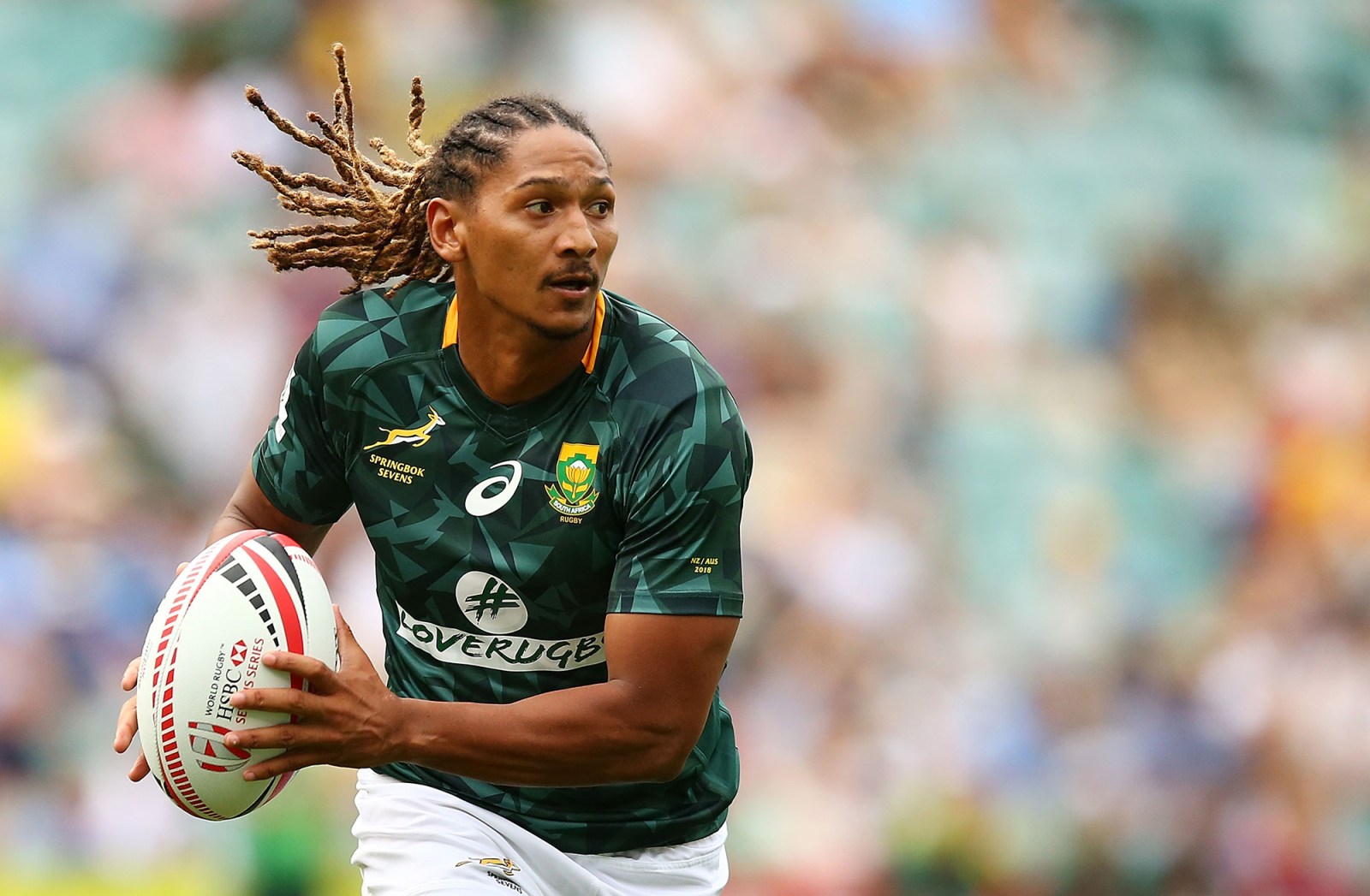 Justin Geduld of South Africa in action during the men's pool match between South Africa and Papua New Guinea during day one of the 2018 Sydney Sevens at Allianz Stadium in Sydney, Australia. (Photo: Mark Nolan / Getty Images)

The South African team will have plenty to prove at the Olympic Games in Tokyo.

The Blitzboks will take a step into the unknown when they depart for Tokyo on 12 July. While they have been building towards the Olympic Games for more than a year, they haven’t been tested against top-flight opposition in recent months and will, as a result, have plenty to prove when the fixtures that matter commence in a fortnight.

While the Springboks have dominated the headlines since the 2019 World Cup, the Blitzboks have been South Africa’s most consistent rugby team over the past five years.

Expectations were high when they travelled to the 2016 Games in Rio, and while a bronze medal didn’t reflect the quality of a team that included superstars such as Seabelo Senatla, Rosko Specman and Cheslin Kolbe, it marked a breakthrough as South African rugby’s first Olympic medal.

The Blitzboks showed their class when they won back-to-back World Rugby Sevens Series titles in 2017 and 2018, and, after falling short in 2019, mounted a strong challenge for the trophy in 2020 before Covid-19 brought it all to a premature halt.

The South Africans are expected to medal in Tokyo, although it remains to be seen whether they will claim gold, silver or bronze. The Covid-19 situation in South Africa has prevented the Blitzboks from travelling to compete in big tournaments and fixtures for more than a year, and their preparations have been severely limited as a result.

There’s no getting around the fact that this team will have to play “catch-up” once they hit the ground in Tokyo. The team’s physical and mental preparation, however, stands them in good stead.

“I’ve been in the Sevens mix since 2007,” Blitzboks coach Neil Powell told DM168. “I first served as a player and captain, and took the head coaching reins in 2013. The past eight weeks have been my best in the system. The work ethic from the guys has been incredible, and I’m optimistic about what we can achieve in Tokyo.

“It’s hard to say where we are at the moment. We’re used to competing in the World Rugby Sevens Series, where big teams such as New Zealand, Fiji and the US put us under pressure on a weekly basis. It’s been good to get some playing opportunities [against African national teams and academy sides in tournaments staged in South Africa] but we are under no illusions. It’s going to be a big step up in Tokyo.”

South Africa will play the US, Kenya and Ireland in Pool C of the Olympic event. Team USA have taken great strides in the seven-man discipline in recent years, finishing second in the last completed edition of the Sevens Series (2018-2019).

Kenya qualified for the Olympics after claiming the Rugby Africa title, while Ireland secured a spot at the Games for the first time after beating France in a repêchage tournament in Monaco last month.

The Blitzboks boast some of the most skilled individuals in the game. And yet, as Powell points out, it’s their pack mentality as well as an unwavering faith in the team culture that’s been at the heart of their past successes.

“We had a four-week block at a recent camp that focused on our culture. It was important to speak about what’s needed to win a gold medal, and to talk about our identity as a team and the themes for the campaign,” Powell said. “We want to embrace the warrior mentality, the idea that you will physically go to battle and leave absolutely everything out there on the park. That said, it’s not an individual thing. We have to hunt as a pack.

“If you think about wild dogs, individually, they’re not the biggest predator. And yet, they have the highest kill rate because they work as a pack and are so technically efficient when it comes to taking down their prey.”

Shortly after winning the 2019 World Cup with the Springboks, Rassie Erasmus – in his capacity as South African director of rugby – spoke about building on that success at every level of the game. He outlined the Boks’ next assignment against the British & Irish Lions, yet stressed the importance of the Blitzboks and the national women’s team.

Erasmus would love to see a gold medal next to the Webb Ellis Cup in the trophy cabinet at SA Rugby headquarters. It would certainly serve to confirm that South African rugby is on the right track.

Powell has consulted with Erasmus as well as several of his counterparts in the 15-man code. For a long time, the Blitzboks led the way on and off the field – both in terms of results and culture. But the success of the Boks at the World Cup, and the special culture that took them from seventh to first in the World Rugby rankings, cannot be ignored.

“Rassie and I have a good relationship and there is always an opportunity to talk and exchange ideas,” said Powell.

“The Boks played the World Cup in Japan, and the Olympics will take place in Tokyo, so I’ve spoken to Jacques Nienaber at length about the conditions and other important issues.

“It was interesting to hear about how the Boks bounced back after losing their first pool match against New Zealand in 2019.

“You could see from the outside how integral the team culture was to the Boks’ success. They played for one another and really believed in what they were trying to achieve. Even the eight squad members who didn’t feature in the playoffs still had a part to play. From a rugby point of view, they were completely aligned.

“They built something unique. We have been inspired by their success, but we have also worked hard to create our own culture that is specific to our own goals.

“The senior guys set the tone in that respect,” Powell said. “Captain Siviwe Soyizwapi, Justin Geduld, Stedman Gans, Impi Visser and Chris Dry are part of the leadership group – 90% of our culture is driven by those guys. The players should be setting the standards.”

Earlier this year, dual-code superstar Rosko Specman spoke about his dreams to represent the Springboks and to push for a gold medal with the Blitzboks at the Olympics. As fate would have it, one dream came at the expense of the other. The 32-year-old made his Bok debut in the first Test against Georgia recently. He will remain in camp with Nienaber’s team when the Blitzboks travel to Japan.

Nevertheless, Specman – a key figure in the sevens team between 2014 and 2020 – is well placed to comment on that special culture and the brotherhood that’s been at the heart of so many tournament and series titles.

“We had a good understanding of each other as people and as teammates,” Specman said. “That understanding developed to the point where you would know where your brother was going to pop up on the field at any time. We were all on the same wavelength. I remember that Neil gave players room to express themselves – and the players did not abuse that responsibility. Sometimes we would have a little dance-off before we ran out onto the field just to get the juices flowing.

“Neil would smile when he saw us behaving like that. He would say that a happy team is a dangerous team, and that our opponents were in trouble. When we were in that space … that’s when the magic happened.”

Powell chuckles when he is reminded of such episodes.

Tokyo will bring the curtain down on his long tenure with the Blitzboks as it’s been confirmed that he will join the Sharks as a defence coach thereafter.

It’s fair to say that everyone at the Blitzboks will be going all out to make Powell’s final campaign one to remember. DM168