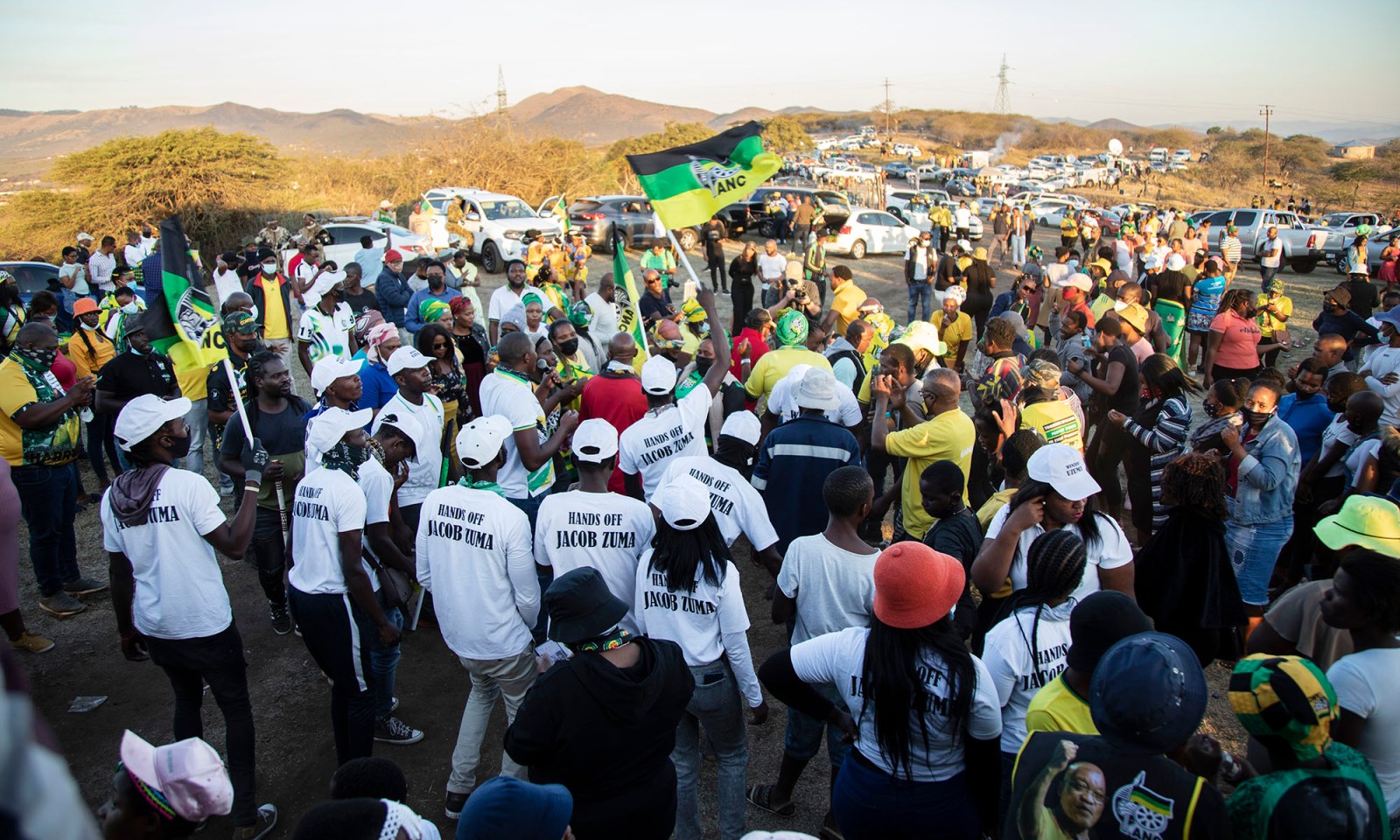 Supporters of former president Jacob Zuma at Nkandla. Zuma will seek to stay the implementation of the order for his arrest. (Photo: Leila Dougan)

The ANC's national leaders have compared the actions of some of its military veterans to ‘displays and acts by extreme right-wing elements’ as it puts down its foot on threatening behaviour from those supporting convicted former president Jacob Zuma.

If there was any appearance of equivocation, confusion or hesitation on the part of the ANC’s leadership over the drama — carefully orchestrated by the ANC’s pro-Zuma lobby — that unfolded in front of the former president Jacob Zuma’s Nkandla estate over the weekend, party deputy secretary-general Jessie Duarte publicly attempted to put it to rest.

While the party will be acting harshly against his gun-wielding supporters, Duarte at a briefing in Luthuli House on Tuesday morning said some “senior members of the ANC” will “on an ongoing basis have talks with Comrade Zuma”. There is still fondness in the party for the former president, who has not been asked to step aside from his ex officio position in the NEC, despite his criminal conviction. “Comrade Zuma is an elder and we love him, we respect him, and there is no reason for us not to engage him.”

In a little snippet of bad news for Luthuli House staffer Carl Niehaus, Monday’s special national executive committee meeting has ordered the Umkhonto we Sizwe Military Veterans Association (MKMVA) to disband — this time for real. The NEC in its statement said that it has decided to ratify the national working committee’s decision some weeks ago “for the immediate disbandment of MKMVA and the MK Council (comprising of military veterans not supporting Zuma) and confirm the establishment of the MK Veterans Unity Conference Preparatory Committee and 60th Anniversary Committee” ahead of celebrations later this year on 16 December.

The NEC stated in strong words that actions of “sections of MKMVA … which as a liberation army prided itself on its discipline, is a shameful blight on this proud history. The threat of violence aimed at undermining our democracy and its core institutions is counter-revolutionary, akin to similar displays and acts by extreme right-wing elements.”

The NEC noted, Duarte said, the “counter-revolutionary calls for violence and even civil war, parading of armed groups, flagrant display weapons and firing of guns, as well as the activities particularly of individuals operating under the banner of the MKMVA”.

The party was especially triggered by elements using the words “human shields” as a means to physically protect the convicted Zuma from arrest, after the Constitutional Court ordered him to 15 months in prison for contempt of court after he refused to obey an order to testify in front of the State Capture Inquiry. “These are words that are used by terrorists, internationally. We sat up and took note,” she said. The NEC in its statement said the police did well to manage “the volatile situation as best as they could, avoiding a situation in which deliberate acts of provocation may have resulted in bloodshed, using human shields”.

Zuma supporters warned ahead of the weekend that there could be “another Marikana”, referring to the police’s shooting of striking miners in August 2012, an event that many still blame President Cyril Ramaphosa for although an inquiry cleared him.

Threats like these of the “human shields” was one of the reasons why the party thought it wise to postpone its NEC meeting over the weekend. It wanted to ensure that KwaZulu-Natal doesn’t burn — something Duarte said it successfully avoided.

At the same time, the governing party is trying to downplay the events in the province over the weekend, when Zuma’s gun-wielding Covid-defying supporters flocked to Nkandla while minister Bheki Cele’s police officers and their spy cameras looked on. Duarte said it wasn’t a national uprising, but carefully apportioned some responsibility to the media. “Some journalists also fuelled it a bit, the excitment”.

The NEC in its statement noted the “populist attempts by some to use retrogressive and opportunistic ethnic mobilisation for their own opportunistic objectives” as well as the “deliberate defiance of the Covid-19 restrictions, with the call for people to gather in numbers from different areas”.

This is also a personal issue for some party leaders, such as Duarte herself, who said that you take Covid-19 seriously if you’ve lost three family members in a year to the virus. Disciplinary action is underway for those who organised the gatherings, as well as those who burnt ANC regalia and conducted other “acts of ill-discipline”. The secretary general’s office as well as KwaZulu-Natal secretary, Mdumiseni Ntuli, have been instructed to investigate the matter.

The party was also careful to send out the message that it supports the country’s institutions, even as Duarte refused to comment on the confusing details of Zuma’s possible incarceration.

“While there may be different responses on details of this situation, there are aspects that the ANC and society agree on,” the NEC statement said. These include the party’s “unequivocal commitment to and defence of the Constitution, in particular the supremacy of the Constitution, the rule of law and the independence of the Judiciary”.

It also sought to silence those using racial arguments to attack the current dispensation. “The NEC reaffirmed our understanding that we consciously chose a democratic system and constitutional dispensation. It was not an accident, concession or a compromise, but rather an expression of our fundamental values and beliefs as espoused by the African Claims, the Freedom Charter, the Harare Declaration and the Constitutional Principles,” its statement said. “The meeting stressed that it must always be clear that the interests of an individual cannot take precedence over or jeopardise the interests of our democracy or of the nation.”

It also included that its support for a constitutional democracy “encompasses a commitment to fundamental change or radical social and economic transformation, so that all can enjoy the socio-economic rights enshrined in the Constitution”.

The party also reaffirmed that it believes “everyone is equal before the law, has the right to equal protection and benefit of the law, and conversely, that every person has an equal responsibility to respect and observe the law”.

It acknowledged the fact that Zuma is “still exploring various legal options, including to the Constitutional Court”, with reference to his application to the court for a rescission of its earlier decision, set down for Monday 12 July.

It was also clear from the statement that the party would not want to be seen to pursue a political solution to Zuma’s legal troubles, but it also did not want to see political attacks against the judiciary and law enforcement agencies. “Any attempt to respond to legal and judicial matters through threats and acts of violence, form any quarter, is abhorrent, and should not and will not be tolerated,” the NEC statement said.

The party also said the State Capture Inquiry should be supported.

Duarte said NEC members will support the party’s provincial executive committee in KwaZulu-Natal to ensure stability in the province.

*Niehaus, in a statement,  said the MKMVA,  “has noted with dismay” the ANC NEC’s statement, reconfirming the “so-called disbanding of MKMVA”. He used the Zuma camp’s standard defence that its detractors are “responding emotionally and in anger”, and “in total disregard of the ANC constitution and its proper procedures”.  He said the MKMVA was an “autonomous structure” and it wasn’t “legally, nor politically” possible for the ANC to disband it and said it would “continue to carry out the democratic mandate bestowed on us by our 5th National Conference in 2017”.  DM

This article was updated with Niehaus’s response at 3.22pm.