Corruption in a pandemic: R15bn (and counting) – I want to pay my taxes to Gift of the Givers 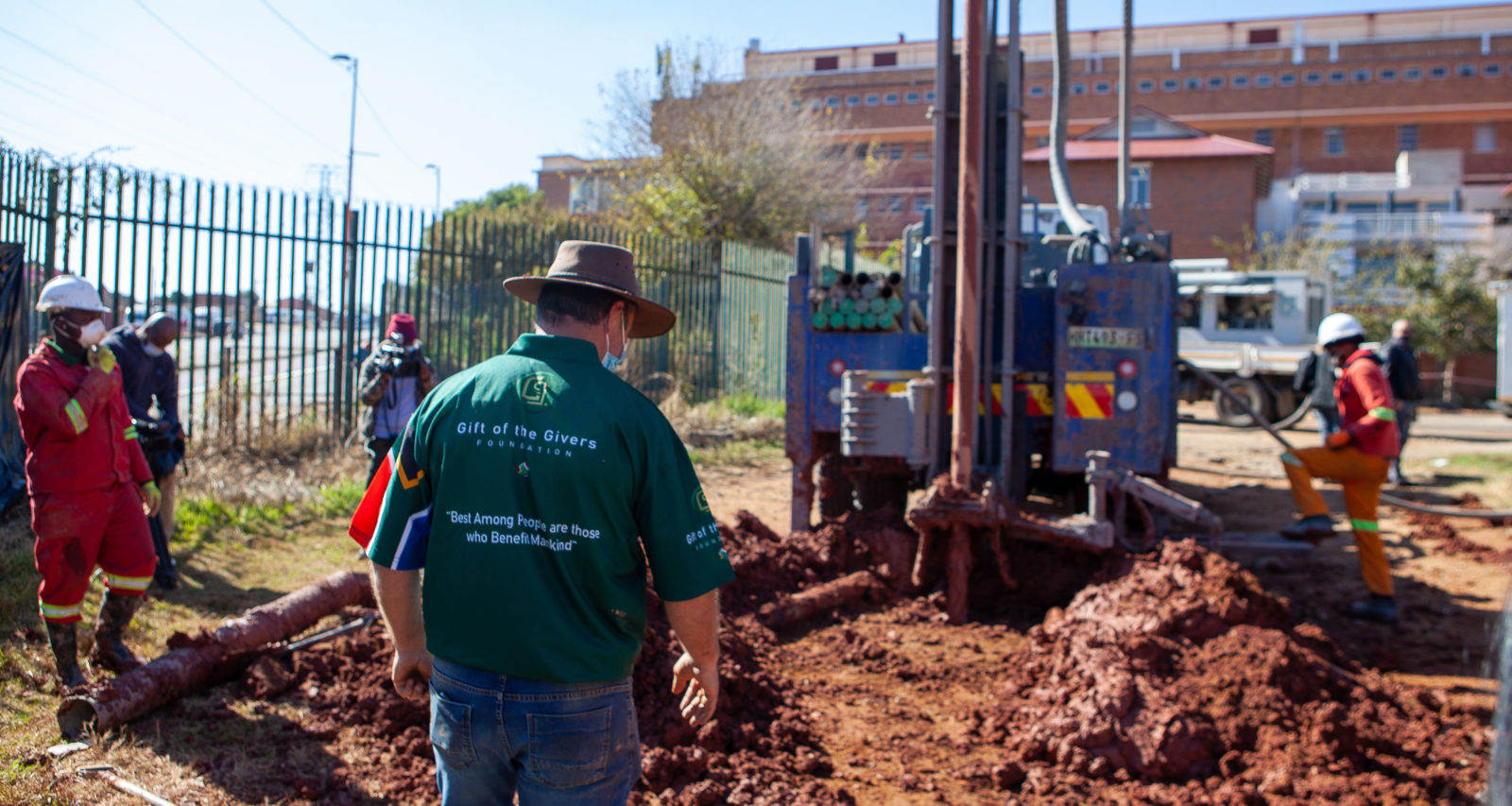 Gift Of The Givers at Rahima Moosa Mother and Child Hospital on June 02, 2021 in Johannesburg, South Africa. It is reported that Gift of the Givers teams drilled for water at the hospital following water disruptions at the facility and surrounding areas. (Photo by Gallo Images/Papi Morake)

Industrial-scale larceny did not end when Jacob Zuma left the Union Buildings. Now I want my taxes to be used for the good of all the people.

The scale of the looting for luxury consumption pitted against the scale of the poverty and hardship you encounter everywhere is making me ill. I am sure you have the same feeling. Corruption is being exposed in real-time because the Commission of Inquiry into State Capture has made the system more transparent to civil society watchdogs.

But what the exposés of R14.2-billion – stolen from pandemic-fighting funds meant to keep the elderly, the young and all of us safe from the most dangerous virus in a century – tell us is that no money is sacred from the networks of scavengers. Fly-by-night companies and dodgy tenderpreneurs move like schools of sharks to where the next opportunity is to feed.

We have yet to read the full story, but the head of the Special Investigating Unit, Andy Mothibe, said last week that the PPE corruption was like nothing he’d ever seen before. In the Sunday Times, Sam Mkokeli described the theft as being on an industrial scale.

Mark Heywood and Ufrieda Ho, writing in Daily Maverick, uncovered that the Gauteng education department spent R431-million on sanitising schools. The Western Cape spent just over R2-million, which is likely closer to what it really costs to clean a province’s schools.

The margins are so grotesque that the contract beneficiaries almost immediately took the money, meant to keep children and their teachers safe, and blew it on expensive watches, insurance policies, new homes and cosmetic surgery. It will take years to put these people in jail – and how you recover the cost of plastic surgery, I’m not sure. Botox can’t be returned.

If you go to a vaccination site today, there is very little public education or messaging. In general, basic public health information is not being generated to answer peoples’ questions – but the health department signed a contract worth R150-million with a fly-by-night company, Digital Vibes, to do this kind of work.

It is brazen theft, and investigative journalist Pieter Louis-Myburgh will soon expose how the health department also splurged money on a nice life for the Mathers, Mkhizes and Mithas – the three families who benefited from our public health messaging money. The Guptas and Watsons (the owners of Bosasa) may be gone, but their methods remain.

In 2020, and this far in 2021, almost R15-billion has been lost to corruption, according to reports. The exposés have all been done by civil society, including the media. These have triggered investigations by the SIU. The good news is that a corruption-avoidance system is working, but the bad news is that the media scrutiny deals only with a limited number of contracts. The Auditor-General’s spending reports suggest the amounts lost are much higher.

Criminal justice reform is too slow for the speed of the hyena packs, which are already moving to infrastructure and the National Health Insurance, where the next big-money state expenditure will happen. As public administration intellectual Ivor Chipkin has written, corruption is vertically integrated into South African politics. Stopping it will take decades and, as the big three scandals of 2021 have shown, President Cyril Ramaphosa’s reformist persona is no guarantee against industrial-scale looting.

There’s a lot to loot.

South Africa is a middle-income country and SARS last year collected R1.25-trillion from us. Add in the provincial and local government fees and levies, and we pay Scandinavian-level taxes for basket case services.

The impact of spending overall is poor if you look at education and health standards, or at the state of the network industries that drive the economy and unemployment – Eskom, Transnet and the data networks. The data networks are efficient but often too expensive to make an impact on development, and government has not yet managed the migration from analogue to digital to bring down costs.

In June, we all watched as Gift of the Givers took their borehole rig to find water at the Rahima Moosa Mother and Child Hospital in Gauteng, and here earlier in the year. Ongoing water cuts meant surgeries had to be cancelled, birthing mothers could not bathe and blood from stab wounds couldn’t be cleaned off the floors. But Gift of the Givers came along and sorted the problem out without asking for a cent in return.

We witness this time and again where the organisation will go into an emergency situation and fix it. It is already doing a significant amount of government’s work, and funding will allow an expansion. In the book “Imtiaz Sooliman and the Gift of the Givers”, journalist Shafiq Morton describes what has made the charity such a global gift. The organisation has the scale, skill and pace to do all the work our government does not do.

So, until the thieving stops, I want the option to pay my taxes straight to the Gift of the Givers. The indirect taxes raised through VAT, the fuel levy and other forms of revenue can support the grant system, which is the most efficient of government’s programmes – although the payment system was enriching high-flyers and cronies until civil society stepped in.

Morton writes that Sooliman works on the principle of being proactive, not reactive. The South African state is reactive. He is a medical doctor with expertise in nutrition that is recognised in hotspots around the world.

Right now, my taxes are a grudge payment – but to Gift, I would give with joy.

South Africa has a growing hunger problem – possibly the worst of the Covid impacts as the Nids-Cram studies have repeatedly found. Gift of the Givers has helped develop food products that help with micronutrient deficiency and they can feed people at scale. Sooliman knows how to fundraise and people want to entrust the organisation with their money.

When the “green army” (the colour of their volunteers’ tracksuits) went into gear after the University of Cape Town fires earlier this year, the organisation had to tell people to stop giving as they had received enough.

Right now, my taxes are a grudge payment – but to Gift, I would give with joy.

Sooliman’s finance manager describes their approach to money and trust. “Allaudin [a staff member] knows he can’t even move a toothpaste tube without me wanting to know why.” The trust link between the citizen and government has been smashed by corruption.

Gift of the Givers does its work without politics and works with all communities. Too often today, our development funds are used as political patronage, as was the case with the Estina dairy farm project in the Free State.

The charity works around the world in natural disasters and during wars – and it works quickly. In the book, Morton writes that its teams of doctors can get a hospital ward up and running in six hours. Their team drilled the borehole at the Rahima Moosa hospital in under a day. This, while the snail state in South Africa retards development and health, as the pace of the vaccine rollout is showing.

In 2011 in Somalia, the Gift of the Givers team set up the hospital to help people who had not seen doctors in decades. “…The South African medical teams based at four hospitals became the unsung heroes of Mogadishu. The figures were and still are impressive: nearly 11,000 patients seen, 80 surgical procedures and 10,000 families supplied with dry rations,” writes Morton about a short intervention.

Running a state is not the same as running a disaster operation, but Gift of the Givers is now a permanent institution in South Africa. It has started villages, runs water systems and keeps the wolf from the door of thousands of homes. The book reveals how the organisation is a logistics machine – just what South Africa needs desperately. It can scale up quite easily because of its network effects that are made quite clear in the story of Gift of the Givers. And it partners well with other organisations for impact.

The tender system in South Africa optimises opportunities for corruption for the connected elites, especially in the provinces where the lion’s share of public funds ends up.

The state spends upwards of R500-billion in buying (or procuring) from businesses annually. Politics is now about influencing how that money is spent and with whom it is spent. Procurement is often about paying the highest price – the preferential procurement system to ostensibly support small black businesses.

This explains how Gauteng can, for example, blow over R400-million on school cleaning. For citizens, it means less spending on development and more on the creation of a party elite.

The only way to break that system is to spend in the way of a non-profit. Sooliman leverages Gift of the Givers’ buying power and networks to get as much as possible for the best price possible. We can strip profit as a motive from the public purchasing equation, as it should be in a country like ours where rising unemployment has driven millions of people into poverty.

There is a movement across the country to ring-fence public funding from corruption. In Makana the community had the council dissolved, and it is now developing its own blueprint for governing itself. In Koster and Swartruggens in North West, a court granted an order allowing residents to take over the waterworks ruined by the municipality.

In Vryburg, the business organisation Sakeliga will go to court to ask for an order allowing it to withhold payments from the Ditsobotla and Naledi municipalities in Vryburg and to make payments directly to Eskom.

People have had enough of corruption.

The idea of being allowed to pay my taxes to Gift of the Givers is not outlandish. What is outlandish is that public servants entrusted with the sacred stewardship of caring for us during a pandemic have allowed at least R15-billion to be stolen. DM