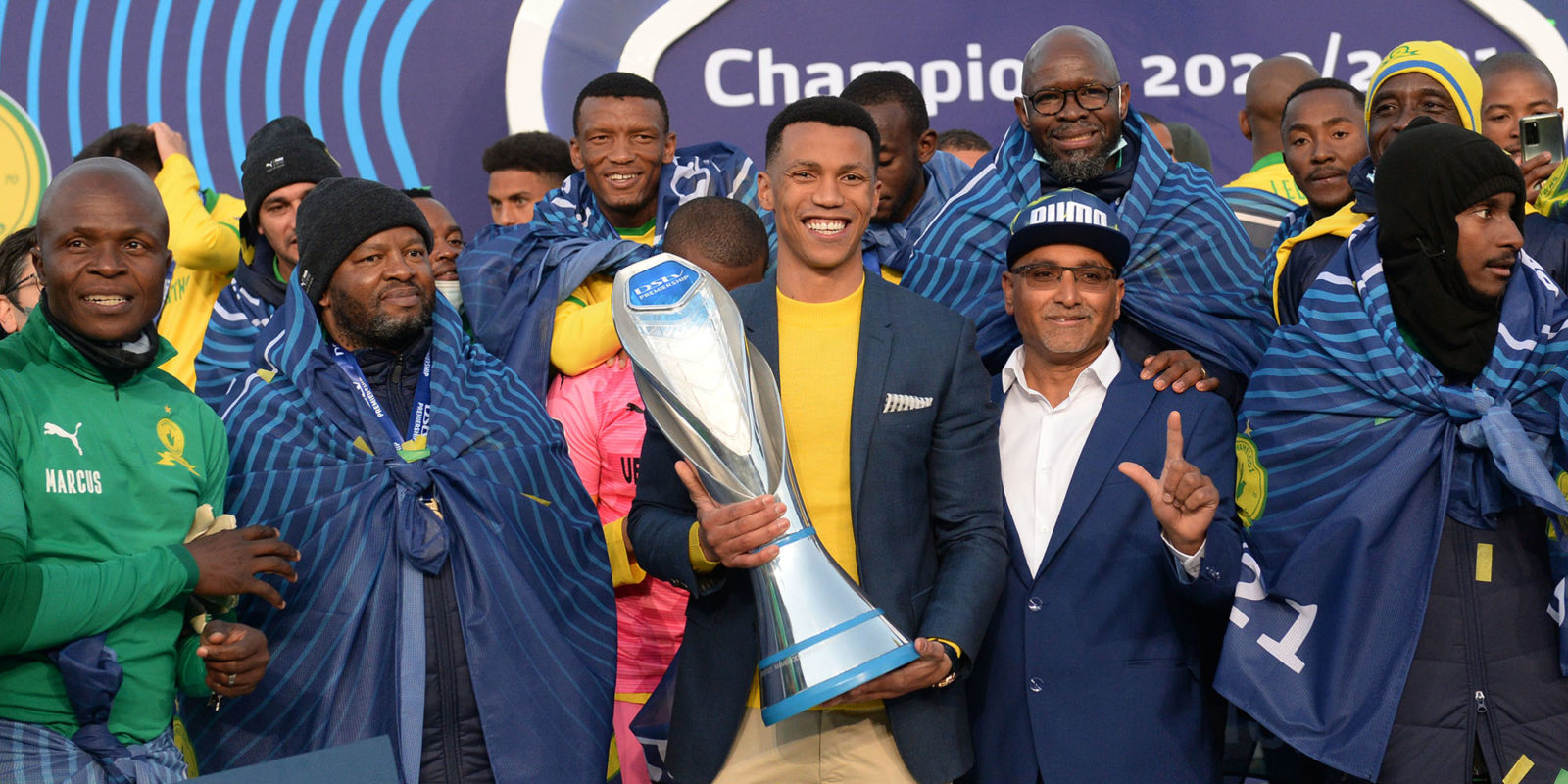 The 2020/2021 DStv Premiership season served up exciting football, a continued dominance by Mamelodi Sundowns and a host of disappointing displays for others.

While relegation candidates were wallowing in self pity after disappointing seasons, Mamelodi Sundowns celebrated their 11th Premiership title in style. Masandawana trounced Cape Town City 3-0 on the final day of the season to underline their dominance. And Peter Shalulile capped off a brilliant season with a brace, taking his season’s tally to 15 while further enhancing his already soaring credentials.

Sundowns, who tasted defeat just once on their way to the finish line, ended the season on 67 points after 30 games. They sealed a historic four-peat — their fourth league title in a row — to maintain their dominance of South African football.

While reflecting on some of the challenges the champions faced this season, co-coach Rulani Mokwena also hinted that there is much more to come from the team.

“Covid was a huge one [challenge], a very strange season, a season where because of Covid we had to rotate the team a little bit and sometimes you lose a little bit of rhythm, that fluidity at times and trying to maintain the quality in and amongst the changes has been a major challenge,” Mokwena said to Supersport.

“Having a bit of an inflated squad also has been difficult, we couldn’t trim the squad because of Covid, you need the numbers, the quality and the depth. But we’ve done exceptionally well to set a good foundation,” he continued.

“Because that’s what it was; our first season we needed to set the foundation and hopefully we build on from this. It’s very important to not only go for the Grand Slam, which is the league title, but to fight for the CAF Champions League next season and try and get the big one.”

Having barely survived direct relegation in the 2019/2020 season, Black Leopards were not so fortunate this season.

The Limpopo club was held to a 1-1 stalemate by Bloemfontein Celtic on the final day of the 2020/21 season, as they went out of the top flight with a whimper. Their relegation was confirmed last week as they lost 3-1 to Cape Town City in their penultimate game.

The drop for the Limpopo side had looked imminent in recent months as they struggled to exit the basement.

Leopards, in their 30 games this campaign, managed a mere five wins. A total of 17 losses and eight draws left them languishing on 23 points, four points off 15th-placed Chippa United.

That paltry return ensured the end of Lidoda Duvha’s three-season stay in the top flight of South African football. This is the third time they’ve suffered this fate. Previously they were at the wrong end of the table in the 2007/2008 season, and the 2012/2013 campaign.

Chippa drew 1-1 with Supersport United to end 15th on the log in a tumultuous season that saw club owner Chippa Mpengesi hire and fire three coaches.

Lehlohonolo Seema‚ Dan Malesela and Serbian Vladislav Heric were all enlisted at some point in this campaign. On failure to yield satisfactory results, they were shown red cards by Mpengesi.

Siyabulela Gwambi took over the reins on an interim basis following Malesela’s departure in April. The club also twice attempted to enlist the services of a man who has become a villain in African football, Belgian coach Luc Eymael.

The former Free State Stars coach is alleged to have called fans of Tanzania Premier League side Yanga Africans “illiterate and monkeys” while he was coaching the side in 2020. The South African Football Association made it clear that Eymael could not work in South Africa, forcing Mpengesi to abort plans to recruit him.

Seema has since returned to the Eastern Cape-based outfit. He oversaw the club’s final two games, which they failed to win.

Following their season-ending game with Supersport, Seema said they would have preferred to be completely safe from relegation, but unlike Leopards, they will live to fight another day in the relegation/promotion playoffs.

“It’s a 1-1 draw that we can take, it’s okay. At least we tried and did not lose the last match of the season, however, we have to prepare for the playoffs now,” said Seema.

“There’s life and there’s a fight that we are looking at in a very serious way, because it’s not everyone who gets a second chance. The guys (players) are disappointed, but they know there’s still life to go and fight and come back.”

Soweto rivals Orlando Pirates and Kaizer Chiefs celebrated small victories in a season where they both flattered to deceive — much to the irritation of their passionate fans.

A solitary goal from Samir Nurkovic saw Amakhosi end the season with a 1-0 victory over TS Galaxy. The result ensured that Chiefs finished the campaign in the top eight, leapfrogging their opponents who ended their maiden season in the top flight in ninth spot.

The hijacking of eighth spot by Amakhosi due to a slightly superior goal difference to that of Galaxy will be of some consolation to the Soweto giants, considering the rocky season they’ve had. The 36 points which they managed to collect from their 30 games is their lowest haul in Premier Soccer League (PSL) history.

Following the firing of Gavin Hunt, a new coach is expected to be announced soon. Whoever it is will be expected to improve the team drastically.

Amakhosi’s neighbours Pirates have had a somewhat better season.

The Buccaneers draw 0-0 with Tshakhuma Tsha Madzivhandila (TTM) to pip Golden Arrows to third spot and as a result, a spot in the CAF Confederation Cup. They’ll still be kicking themselves, though, for failing to keep pace with Sundowns.

Having won the MTN8 early in the season, and as a consequence ending a six-year trophy drought, the Buccaneers’ talented squad was expected to challenge Masandawana. As it was, Pirates failed to do this and it was left to an unlikely source in AmaZulu to give chase to the runaway champions.

Josef Zinnbauer’s role as Pirates coach remains in doubt, with the German coming under pressure for failing to bring the best out of his players. DM