Mamelodi Sundowns stay at the top of the Premier Soccer...

Mamelodi Sundowns stay at the top of the Premier Soccer League 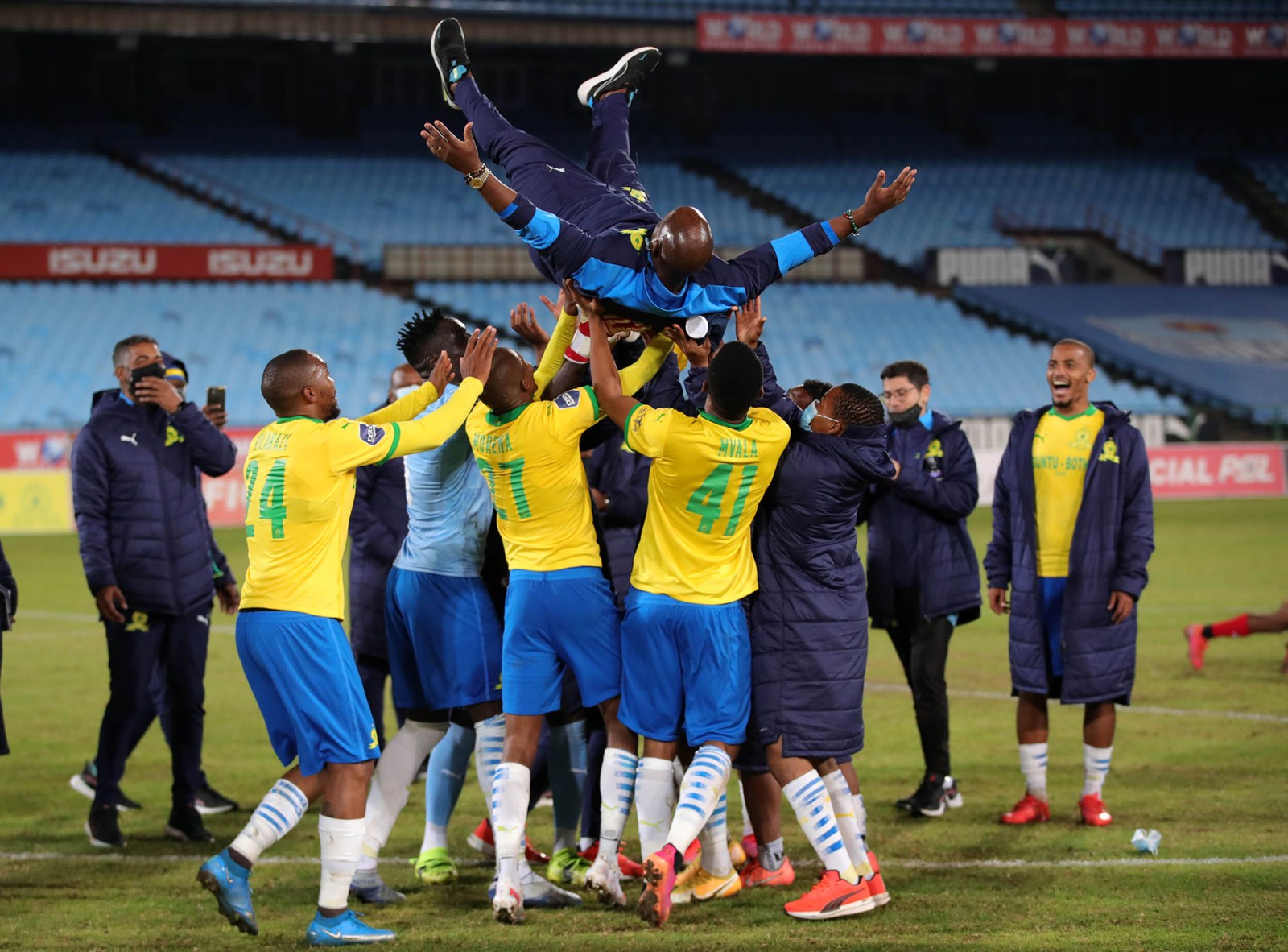 The team has strengthened its position as the country’s most successful side in the Premier Soccer League era. They won the 2020/21 league title convincingly, and this despite the departure of a famed coach.

Mamelodi Sundowns recently sealed their fourth league title in a row. No South African club has ever managed this before, with Masandawana and their Tshwane rivals Supersport United previously managing a hat-trick of league titles.

The abrupt departure of their long-time coach Pitso Mosimane at the start of this season had those associated with the 2016 African champions in a panic.

Mosimane had just signed a new long-term contract with the club a few months before his departure. Owner Patrice Motsepe described the former Bafana Bafana international as Masandawana’s very own Alex Ferguson.

But along came a once-in-a-lifetime opportunity to coach at Cairo giants Al Ahly, one of the biggest and most successful clubs in world football arose – and Mosimane grabbed it with both hands.

The 56-year-old was responsible for eight fruitful years at Chloorkop, winning 11 trophies including four league titles and that 2016 Champions League crown. His sudden departure left some within the club’s management feeling betrayed, as recent events have shown.

When Sundowns were recently knocked out of the Caf Champions League by Mosimane’s side, a handful of Sundowns fans gathered at the Lucas Moripe stadium in Tshwane. There they accosted the Red Devils’ team bus, while also hurling insults and profanities at Mosimane and his mother.

Speaking on the incident, Mosimane alluded to the fact that the crowd had been sent by someone within the Masandawana management, although he refused to divulge any names. “I know the person who is behind that,” he said.

“Just bitter because I left,” he said. “I had to move on with my life… The things that I’ve received before my match from South Africa, if I show you my phone, the correspondence I’ve received, emails I’ve received, they just won’t let me go.”

Despite the battles between Mosimane and the Sundowns hierarchy, his successors have gone about their business admirably.

They may have failed to match the heroics of last season under Mosimane, when, on top of winning their third league title on the trot, they also won the Telkom Knockout and Nedbank Cup. But they have won the DStv Premiership convincingly in their first season at the helm.

In their first season in charge as co-coaches, Manqoba Mngqithi and Rulani Mokwena sealed the league title in style. The team thrashed crosstown rivals Supersport 3-1 to win the title with four games left to play.

With one game now left, the Brazilians lead second-placed AmaZulu by 11 points in what has been a dominant domestic display, as Mngqithi pointed out a few weeks ago.

“Up until this point we’ve dominated 99% of our matches played, except for poor possession against Cape Town City, but we still won that one 3-0,” Mngqithi told journalists.

“This was one of our objectives, and I believe we’ve dominated the entire season while the personality of our team remains important. We’ve dominated all of the statistics in ball possession, shots at goal, goals conceded and other aspects of the game over the season,” he added.

One thing that has been important to the continued dominance of the Chloorkop side is continuity.

The pairing of Mngqithi, who is one of the most experienced local coaches around, as well as the less experienced but eager to learn and innovative Mokwena, brought about many questions.

Yet the pair had been at Sundowns long enough and were familiar with the direction the team was taking. As such, they were the perfect candidates, even though questions remained around whether they would be able to strike a harmonious working relationship as two head coaches.

Mngqithi joined as Mosimane’s assistant in 2013 and had been in the role up until his promotion. Mokwena joined a year later, but departed to work as Milutin Sredojević’s assistant at Orlando Pirates in 2017, before returning in early 2020 after short stints as head coach at Pirates and Chippa United.

This made the duo the ideal coaches to continue where Mosimane left off. The addition of Steve Komphela as their assistant further bolstered the collective knowledge of the coaches.

Despite being knocked out in the early stages of the MTN8, and failing to defend the Nedbank Cup, Sundowns have demonstrated that they are far ahead of their traditional rivals. Orlando Pirates and Kaizer Chiefs have both struggled to keep pace with Sundowns as they struggle for that continuity and playing identity that Masandawana have managed to obtain.

Despite their early-season promise under Kaitano Tembo, Supersport have also failed to keep pace with their neighbours. It has been left to the less fancied AmaZulu and Golden Arrows to do the chasing. And Sundowns has left the duo in the dust on the way to league title number four.

Chiefs, after narrowly missing out on their first league crown since 2015 were expected to come back even stronger this season and again make Masandawana sweat.

The recruiting of Gavin Hunt, a coach with proven pedigree, was expected to ensure this. However, a transfer ban and Hunt simply not finding a winning formula in Naturena sees Amakhosi merely fighting to finish in the top eight, never mind chasing Sundowns.

The Soweto giants and Hunt have since parted ways, and a new coach is expected to be announced soon.

When he arrives, he will bring his own ideals and philosophy. Which will mean that Amakhosi start off the new season on the back foot, as Mngqithi and Mokwena fine-tune whatever mishaps they had this season.

As for Pirates, they managed to win the season-opening MTN8. They were expected to build on this success under the tutelage of German coach Josef Zinnbauer.

This expectation has failed to materialise though, and despite their abundance of quality players, the Buccaneers have failed to keep up with Sundowns.

Calls have been made for Zinnbauer to vacate his position as head coach, and just like Chiefs, a new coach would likely see Pirates start on the back foot compared to the 2020/21 champions.

As for the Brazilians, they will be looking to build on the success of this season, and only the brave would bet against them winning a fifth league title on the trot in 2022. DM168