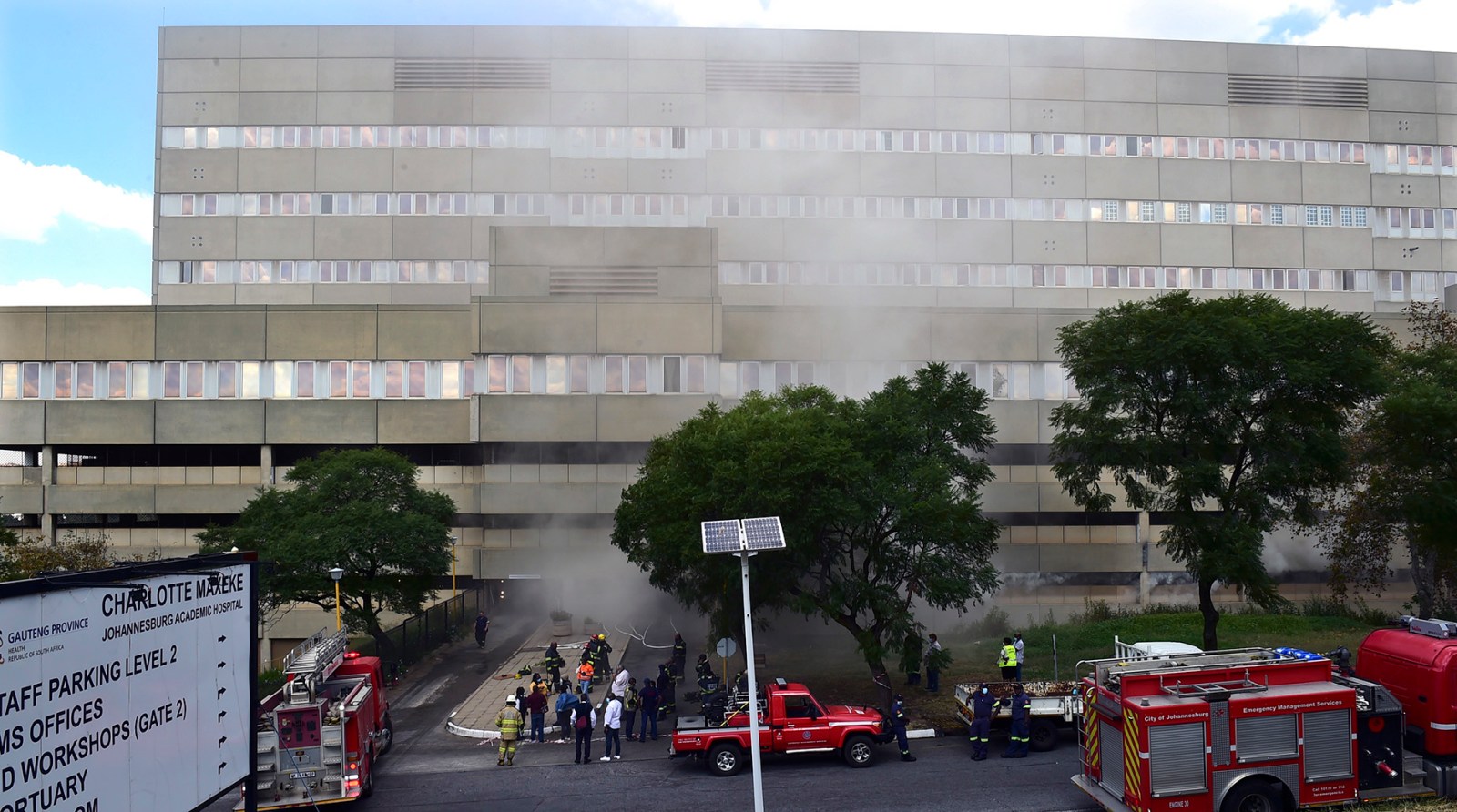 A fire broke out on 16 April at Charlotte Maxeke Hospital in Johannesburg, shining the spotlight on health and safety in public hospitals. (Photo: Gallo Images / Daily Sun / Morapedi Mashashe)

Gauteng is experiencing a sustained increase in coronavirus cases during the third wave of the pandemic and the province leads the country in the number of active cases. As hospital admissions rise, Premier David Makhura has committed to reopening Charlotte Maxeke Academic Hospital and helping resolve water cuts.

The Gauteng government is working tirelessly with stakeholders to reopen Charlotte Maxeke Academic Hospital and to help resolve water shortages at Helen Joseph and Rahima Moosa hospitals to ensure patients receive adequate care during the third wave of the coronavirus pandemic, Premier David Makhura said in a briefing on Friday.

Makhura described the water cuts and closure of Charlotte Maxeke, which was evacuated and has been shuttered for six weeks due to fire damage, as compounding factors affecting the province’s response to the surge in Covid-19 cases.

He said the province currently has over 17,000 active Covid-19 cases, up from around 2,000 cases during his last briefing on the pandemic three weeks ago. Gauteng leads the country in active cases, followed by Free State and Northern Cape, which both have slightly over 8,500 active cases.

Nationally, 5,361 new cases were reported on Thursday, around 3,000 of which came from Gauteng. Almost 2,900 coronavirus patients are currently hospitalised in private and public facilities in the province.

“The numbers are going to become large and we expect the numbers to keep growing through June,” said Professor Bruce Mellado, director of the Institute for Collider Particle Physics at Wits University and a member of the provincial coronavirus advisory council.

“We are in the middle of the third wave and what happens every week is of great significance about whether the pandemic is gaining more momentum or is slowing down. We are not seeing evidence of better compliance [to non-pharmaceutical measures].”

The premier warned that the closure of Charlotte Maxeke was putting strain on other healthcare facilities where patients have been redirected.

She said refurbishments in the oncology unit, patients of which have reportedly been struggling to find care at alternative facilities, were completed on Friday and will undergo a final inspection on Monday.

While the engineers have found the majority of Charlotte Maxeke’s structural foundations to be sound, provincial officials said the hospital is not fully compliant with occupational health and safety regulations.

Motara said the hospital was built when government buildings were not required to submit building plans to the municipality and a number of regulation shortfalls have been uncovered during recent inspections.

Makhura said the province will try to declare a state of disaster to ensure the hospital can reopen before it resolves its health and safety regulation shortfalls, which he suggested were minor.

He added, “We can’t go through the whole of June without Charlotte Maxeke because how else are all the institutions going to cope? I can’t throw a rule book when people are dying.”

Services at Helen Joseph and Rahima Moosa hospitals have been interrupted over the last week due to disruptions in the water supply. Makhura emphasised that water provision is not a provincial responsibility but said he had spoken to leaders at Rand Water who assured him that the situation had been resolved.

Provincial officials said they had been liaising with stakeholders to ensure hospitals would have sufficient backup supplies of water if interruptions continue.

According to provincial officials, almost 150,000 people have been vaccinated in Gauteng during the government’s rollout of the jab. Over 480,000 qualifying residents over the age of 60 have registered on the online system to get the vaccine and officials encouraged more people to sign up.

They encouraged all residents who qualify for the jab under the current phase of the vaccine rollout programme to attend one of Gauteng’s 103 vaccination sites. They said qualifying residents would be assisted to register and get the vaccine, depending on supply, and no one would be turned away. DM