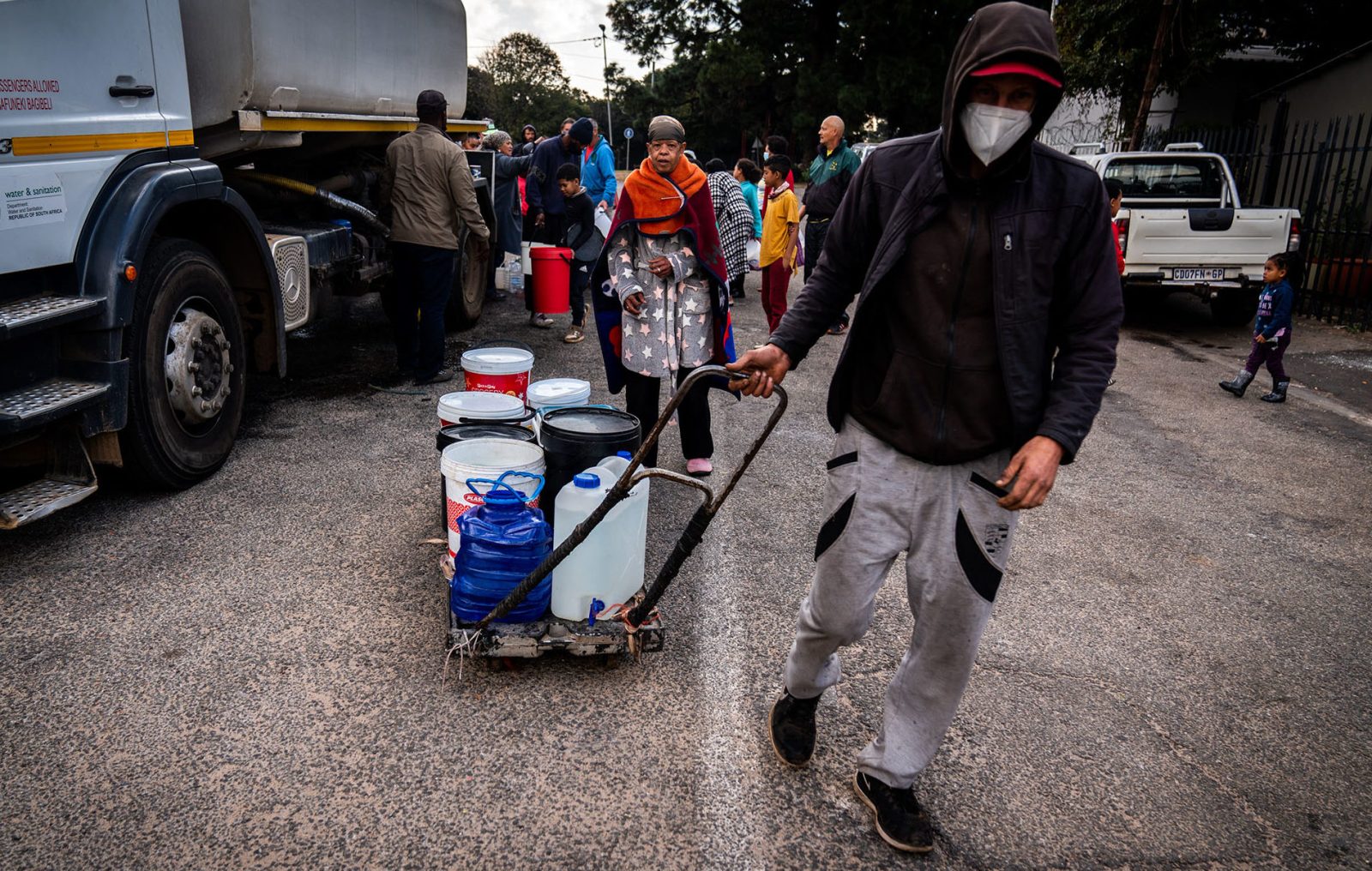 A resident pulls his trolley of water containers of water provided by a tanker in Fietas, Johannesburg. Photo / Shiraaz Mohamed.

Patients at two Johannesburg hospitals have been transferred to other hospitals because of current water outages.

“I am recovering from the surgery. There is no water and all the patients are stressed out. I feel depressed,” said a patient who had just undergone surgery at Johannesburg’s Rahima Moosa Mother and Child Hospital.

She spoke to Daily Maverick during a visit on Monday on condition of anonymity as she feared the hospital would stop treating her.

“All was going well and then the water went off on Saturday at about 4.30pm and it has been off since then. The sisters say the cleaners have to go and collect 25-litre containers of water for the staff to wash their hands, and I completely understand this, but nothing is made available for patients.

“The toilets are piling up with sewage and paper. The cleaning lady just went into the loo to wash the floors but did not even wipe down the toilet seat. Surely they can put a red bag that they use for medical waste and tell the patients to use that for discarding the used paper instead of throwing it in the toilet and clogging it up. Pretty soon the level of paper will be above the toilet edge. My doctor will only discharge me once I go and make a poo, but I cannot because of the condition of the toilets.”

Outside, two tankers were supplying water to the hospital by feeding into the water system. Cases of donated bottled water were packed in a corner of an office boardroom, waiting to be distributed to patients.

Daily Maverick’s request to see the condition of the toilets was denied and access to the hospital was limited.

When Daily Maverick visited Helen Joseph Hospital on Monday, staff members were filling buckets and containers with water from an outside tap. The containers were wheeled into the hospital on trolleys. At the back of the hospital, a tanker pumped water into a large JoJo tank.

As with Rahima Moosa, Helen Joseph officials had also been instructed not to answer our questions. Instead, a statement was issued by the Department of Health’s Kwara Kekana.

“Over the past week,” the statement read, “engagements have taken place with various stakeholders, including Johannesburg Water, Rand Water and the Gauteng Department of Infrastructure to try to find a lasting solution to the ongoing water supply problem.

“As an interim measure, provision is always made to supply affected facilities with water tankers, however, given that health facilities require tons of water to perform various services, and the need for a sustained supply of water, the stop-gap measure only allows for limited service provision.

“Since last week the management of RMMCH [Rahima Moosa Mother and Child Hospital] and HJH [Helen Joseph Hospital] has attempted to alleviate some of the pressure from the two worst affected facilities by transferring out some of the patients to other hospitals and also performing some of their theatre operations at sister hospitals.”

Attempts to visit one of the hospital’s wards to observe the water distribution were prohibited by both the hospital CEO and the Department of Health.

A message from Kekana read, “We don’t allow people in wards, even when there is water. Remember we are still during a pandemic. So the restrictions in facilities are still in place.”

A request to get images of hospital staff filling up containers was also denied by the hospital.

‘How long must we wait for water?’

Communities that surround the hospitals also felt the burden of water shortages. Said Fietas resident Yola Minnaar. “We are actually living out of buckets now. We have been encountering water issues for the past few years and this has just worsened the situation.”

Minnaar, who runs a daily feeding scheme from her house, has a JoJo tank to aid the community, but the tank ran dry as the demand for water increased over the weekend.

“We called and they [water tanker drivers] were scared to come out because they were threatened yesterday. We are waiting. How long must we wait now? I am going to insist on a water truck. We have old people in our community and it is not fair.”

While waiting for a water tanker, Minnaar made several trips to a nearby taxi rank to fill containers with water which she delivered to the elderly in her community. By late afternoon, a water tanker had arrived outside her house, with residents waiting to fill their buckets, pots and containers.

Johannesburg Water spokesperson Eleanor Mavimbela said, “Our teams were receiving some resistance from some of the affected areas when they were trying to move roaming trucks into the area. We have requested the JMPD [Johannesburg Metro Police Department] to assist in that regard.”

In Crosby, which Johannesburg Water described as a critical area, a group of residents from a nearby informal settlement waited outside a mosque to fill their containers with water. The mosque houses a borehole and has supplied water to those in need over the past few days. However, the mosque was no longer able to do so because of the cost. The group dispersed after getting clarity on their situation.

Several properties in Crosby have boreholes and a list was circulated informing residents where they could collect water while they waited for their supply to be restored.

In a statement issued by Johannesburg Water, Mavimbela said, “Eikenhof Pump Station has been pumping at full load since last night. However, due to the size of the system and the fact that it was down for quite some time, it is still recovering. Thus, flow supplied from Rand Water into our system is not normalised yet. The critical areas are still Crosby, Brixton and Hursthill reservoirs.

“Furthermore, we are currently providing water to the Helen Joseph and Rahima Moosa hospitals through water tanking and pumping water into their header tanks. We have been consistently providing roaming water tankers and we are in the process of increasing the number of tankers to cover many of the areas affected, including hospitals and clinics.” DM