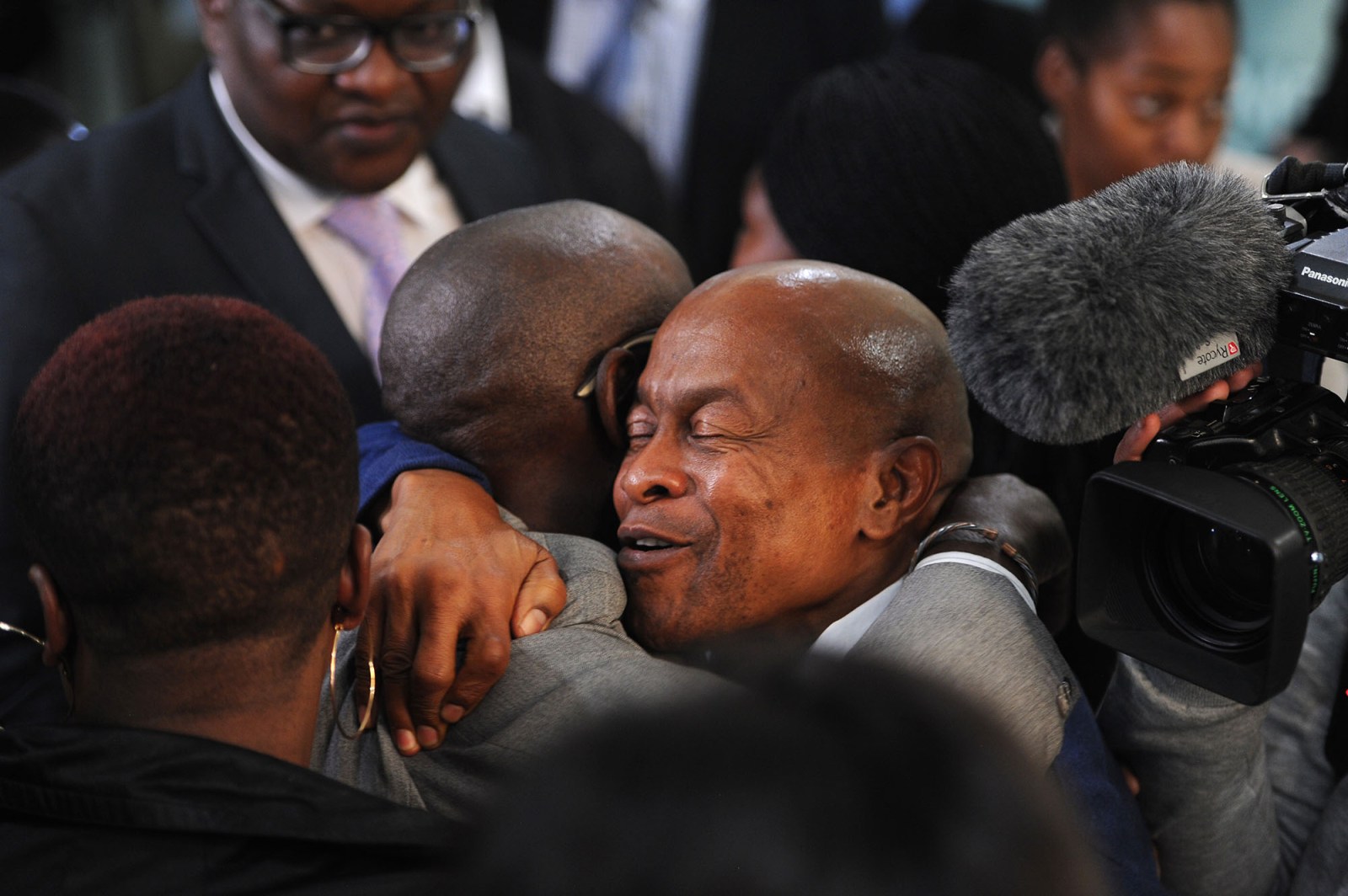 Relatives of Life Esidimeni victims Reverend Joseph Maboe and Andrew Peterson hug after retired chief justice Dikgang Moseneke released the arbitration findings in Johannesburg on the tragedy on 19 March 2018. Moseneke ordered the government to pay R1.2m to each of the bereaved families. (Photo by Gallo Images / Netwerk24 / Felix Dlangamandla)

In memory of the 144 people who died in the Life Esidimeni tragedy, Section27 and the South African Anxiety and Depression Group have launched a memorial and advocacy website.

Cassey Chambers, the operations director at the South African Depression and Anxiety Group (Sadag), wrote in a recent Maverick Citizen guest editorial: “Experts around the world have dubbed the mental health crisis as the ‘second pandemic’, and still our country doesn’t have a plan or strategy to help mitigate the mental health impact going forward.”

“We can never forget, because we can never let it happen again,” said Chambers during her opening remarks.

Five years have passed since 144 mental healthcare users in Gauteng died after being moved en masse from the Life Esidimeni psychiatric facility to NGOs scattered across the province — several of which had been fraudulently approved.

Many died from torture, starvation, injuries and neglect. In 2018, the victims’ families were awarded R1.2-million each in compensation after an arbitration process led by retired Deputy Chief Justice Dikgang Moseneke, but loved ones and NGOs feel steps towards accountability and transformation in SA’s mental healthcare system have not been taken.

“The aim is to change the way mental health is treated in South Africa,” said Christine Nxumalo, whose sister Virginia Machpelah died, aged 50, at the Precious Angels NGO after being moved from Life Esidimeni.

According to Harriet Perlman, a screenwriter and media practitioner, the website, which took two years to produce, is both a memorial to the victims and an advocacy project.

“The website tries to capture what happened by building a story with words and pictures,” she said.

Apart from retelling the tale of the tragedy, and publishing the health ombudsman’s investigation into the deaths and the arbitration hearings, the website features interviews with the victims’ families, photographs and the process towards seeking justice for the 144 who died.

The website also allows the public to report complaints and problems at mental healthcare facilities as well as to seek help.

“People spoke of the desperate months spent looking for their loved ones. Daniel and Lydia Maretele spent almost a year looking for Daniel’s sister Maria. Daniel worked as a carpenter and Lydia as a domestic worker and both lost their jobs during this time. When they finally found her she was dead and had been buried already,” said Perlman.

A feature film on the tragedy is being written and will be directed by acclaimed South African screenwriter and director Craig Freimond. It’s due for release in 2022, depending on whether funding can be secured.

A formal inquest into the deaths begins on 19 July at the North Gauteng High Court.

“The inquest is not a criminal trial, but it is a way for a judge or a magistrate to determine the legal cause of death,” said Stevenson.

“It’s an opportunity for the judge to look at all of the evidence and to make an indication as to whether a prosecution should follow.”

Section27 will represent 35 families at the inquest.

The stigma against people with mental illnesses is preventing them from getting “proper treatment”, said Nxumalo.

“We need to refer people and find information about how to help a family member.”

In December 2020, the South African Human Rights Commission (SAHRC) presented a report to Parliament on the state of mental healthcare and residential facilities. Key findings included the government’s underinvestment in mental healthcare, gaps in access to treatment in rural areas, and gross human rights violations within the system. DM/MC