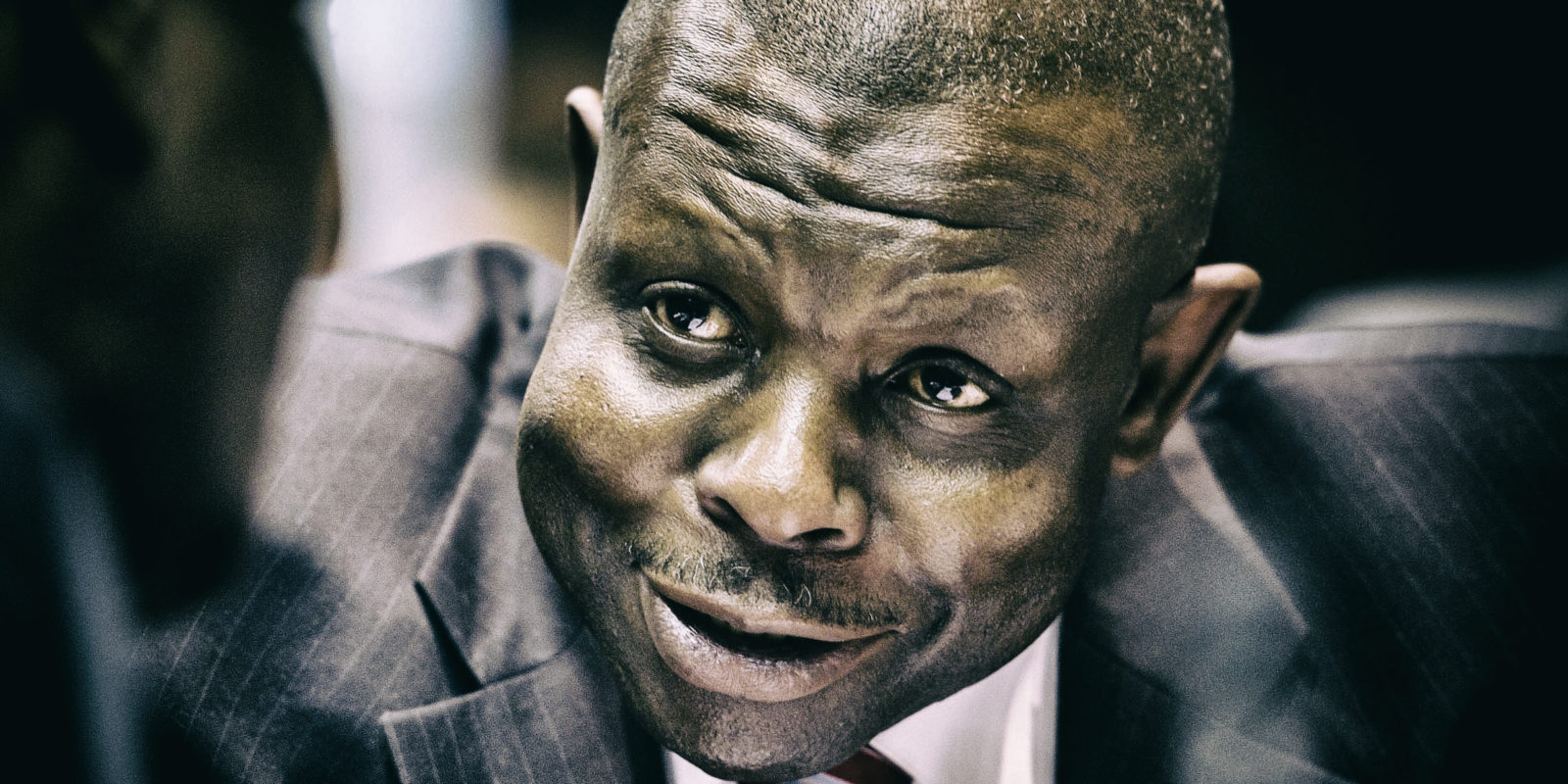 That Judge President John Hlophe — who faces possible impeachment after a unanimous finding of gross misconduct by a judicial tribunal — has allocated to himself the Public Protector’s challenge to the constitutionality of an inquiry into her fitness to hold office, is evidence of Hlophe’s nonchalance in the face of a judicial crisis.

Judge President John Hlophe has disregarded various opinions of his conduct, the most searing handed down by Supreme Court of Appeal Judge Visvanathan Ponnan in 2017.

It will come as no surprise then that Hlophe remains optimistic while the JSC considers damning findings of gross misconduct that could see the Judge President impeached.

It was Hlophe’s conflict of interest in a matter involving his own lawyer, Barnabas Xulu, and Xulu’s client, businessman Matthews Mulaudzi, that Ponnan said had led to the Judge President’s inability to be open-minded, impartial or fair on hearing the matter.

Hlophe has, over the years, publicly insulted Chief Justices, fellow judges and strewn counter-complaints in retaliation for those lodged by fellow judges against him.

He has accused Chief Justice Mogoeng Mogoeng of perjury and conspiracy, labelled his deputy Patricia Goliath as “racist”, a “non-entity” and a “liar” and accused former Chief Justice Pius Langa, Deputy Chief Justice Dikgang Moseneke and Constitutional Court Judges Bess Nkabinde and Chris Jafta of “manipulating facts” and harbouring a “political” motive for getting “rid” of him.

The tribunal which found Hlophe guilty of gross misconduct sought to vindicate Langa, Moseneke, Nkabinde and Japhta and found Hlophe’s attacks on the judiciary “unfounded and scurrilous”.

The judges Hlophe had besmirched had “acted with honour to protect the institutional integrity of the apex court of our Republic” the tribunal stated.

There are further scandals still swirling around Hlophe including his alleged assault of fellow judge, Mushtak Parker, who was suspended in October 2020 pending the findings of a tribunal into possible gross misconduct.

Parker is being investigated for making conflicting statements with regard to Hlophe’s alleged assault of him in 2019.

Then in March 2021, the Judicial Conduct Committee received a recommendation that it institute a tribunal to investigate a dispute between Deputy Judge President Goliath and Hlope’s wife, Judge Gayaat Salie-Hlophe. This over a “domestic incident” involving the Judge President and his wife and that has “driven tensions within the division”.

On 11 April this year, a judicial tribunal unanimously found that Hlophe had in 2008 “improperly attempted to influence the two Justices of the Constitutional Court to violate their oaths of office”.

There is surely no more egregious charge for a Judge President to be found guilty of. Hlophe has naturally challenged the finding.

Hlophe’s approach to the constitutional court judges who were seized with a matter involving then deputy president Jacob Zuma dragged on for over a decade while Hlophe launched several legal challenges and the JSC remained pronate.

Hlophe has appealed the tribunal finding and it is while he waits for the JSC to make a final decision that he still puckers the hot seat of Judge President of the Western Cape, able to assign cases.

Confirmation came at the weekend that Hlophe had assigned himself as one of three judges alongside judges Elizabeth Baarman and Mokgoatji Dolamo, to hear Public Protector Busisiwe Mkhwebane’s ongoing challenge to a parliamentary impeachment inquiry into her fitness to hold office.

NGO Freedom Under Law (FUL), has, in the meantime, urged the JSC, which is due to decide on 4 June on the tribunal’s findings, to suspend the Judge President immediately, that is, should the JSC uphold the findings.

“The president could act on that recommendation speedily, but could do so ahead of the hearing of the PP  matter on 7 June,” said FUL’s Nicole Fritz.

An earlier attempt by the Public Protector to halt parliamentary inquiry proceedings was dismissed in October 2020 when Judge Vincent Saldanha found “there would be serious prejudice to public interest coupled with the separation of powers harm to the National assembly if the [parliamentary] process did not ensue.”

Part B of the matter, in which Mkhwebane seeks to have parliament’s rules declared unconstitutional, will be heard in the Western Cape high court between 7 and 11 June 2021 and it is this matter that Hlophe hopes to deliberate on alongside Baarman and Dolamo.

Legal journalist Franny Rabkin noted in the Sunday Times that Hlophe has not made a habit of assigning politically sensitive cases to himself (apart from swiftly exonerating ANC MP Bongani Bongo on charges of attempting to bribe parliament’s evidence leader in the Eskom inquiry, Advocate Ntuthuzelo Vanara) but the Public Protector’s challenge is one layered with deeper political significance.

Somewhere in the subterranean recesses of the court processes flow various tributaries in what has come to be termed as an “RET” flashpoint fightback against “WMC” whatever these abbreviations have come to symbolise.

The EFF have given vocal support to Mkhwebane despite her crippling defeats and embarrassing grip on the law. Dali Mpofu, her legal counsel, is one of the members of the JSC who will be deciding Hlophe’s fate on 4 June.

It was Mpofu who also argued that bad faith drove this “vendetta” against Mkhwebane and that parliament’s removal proceedings were akin to the apartheid era’s loathsome Sobukwe Clause, a remark he had to later withdraw. It was, the senior advocate had to be reminded, in fact, the Democratic Alliance that had proposed the inquiry.

Like Hlophe, Mkhwebane has argued — in court papers and in her January 2021 submissions to the independent panel chaired by Justice Nkabinde, Advocates Dumisa Ntsebeza and Johan De Waal — that she is a “victim” of “bias”, “conflicts of interest” and “unfairness”.

It is a well-thumbed hymn sheet deployed also by Jacob Zuma throughout his presidency whenever facing any accusation or charge of malfeasance including rape, fraud, corruption and racketeering.

From the start, the Public Protector has argued that parliament’s rules establishing a four-stage process to investigate her fitness to hold office are “unconstitutional”.

It is important to bear in mind that should Hlophe sit, it will be wedged between two judges who may differ with his judgment. Or they may concur.

Hlophe, it is clear, will attempt to remain in the position for as long as it takes and hear the matter. His assignment of the case to himself is surely an optimistic move on his part. His motive for doing so will most likely be revealed in time.

Should the 12-member JSC on 4 June dismiss the tribunal’s findings of gross misconduct Hlophe will hear the PP’s case and life, turbulent as it is, go on in the division.

The JSC would have to find a weight of evidence, however, to counter that of the tribunal and its scathing findings against Hlophe.

How will the JSC vote considering its abysmal track record with holding Hlophe to account?

FUL’s Fritz told Daily Maverick that “Should the JSC on 4 June uphold the findings of the Judicial Conduct Tribunal — i.e. to find Hlophe guilty of gross misconduct — that would still not be enough to remove him from office and he would still be a sitting judge and able to preside at the hearing of the PP matter”.

For Hlophe to be removed, she said, and no longer able to sit as a judge, a finding of gross misconduct by the JSC would need to be followed by a resolution in the National Assembly calling for his removal, supported by two-thirds of members.

President Cyril Ramaphosa would then be required to remove Hlophe and only then would he cease to be a judge.

“We at FUL are urging that a decision to suspend Hlophe, should the JSC concur, be taken at the 4 June meeting. The President would need to act on that recommendation speedily but could do so ahead of the hearing of the PP matter on the 7 June”.

In the case of Judge Parker the JSC recommended his suspension prior to his tribunal inquiry.

“Suspension isn’t a punitive sanction. It’s intended to balance interests, protect the public’s confidence in the administration of justice as the disciplinary process plays out,” added Fritz.

Mkhwebane’s challenge to the constitutionality of parliament’s rules to remove her speaks — as Saldanha expressed in his ruling —  to matters related to the separation of powers between the NA and the judiciary.

Parliament’s removal inquiry — a 17-step process according to the rules unanimously adopted by the House in early December 2019 — resulted on 17 March in the approval by the National Assembly of an inquiry into the possible removal from office of Mkhwebane.

As colleague Marianne Merten wrote, “The convincing vote of 275 MPs for, 40 against and one abstention obscured some of the hard backroom politicking”.

Such is the significance of the Public Protector’s fight for her life. Whatever the high court decides, however, the process to investigate Mkhwebane’s fitness to hold office will grind on, unstoppably.

In the game of chess, the queen has more mobility on the chessboard while the king has more value. You lose the king, you lose the game. Might Hlophe see himself as king and might Mkhwebane be the queen? And who is playing this game anyway? If it is Ace, it will soon be checkmate. DM