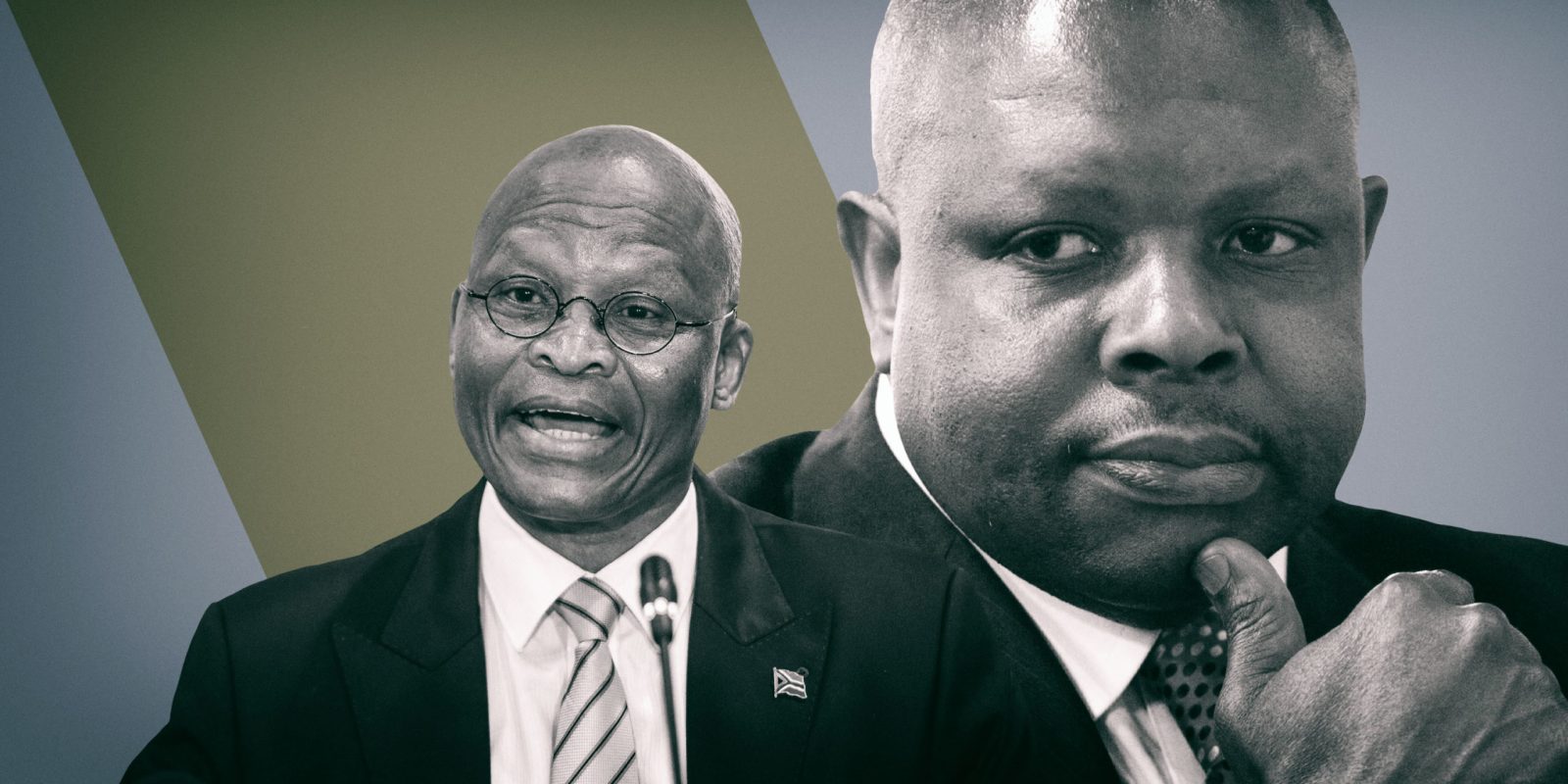 Western Cape Judge President John Hlophe, who usually avoids any contact with the media, has given an extremely rare in-person interview to an obscure YouTube channel, The Insight Factor, co-hosted by Modibe Modiba.

This is a name some readers might recognise as belonging to a “student” who accused Daily Maverick in March 2020 of paying him and others to tweet and write negatively about Independent Media chair Iqbal Survé and the EFF. Daily Maverick was accused of handing over cash in garages in Gauteng from the boot of a Toyota Corolla.

We have been trying for months to have a summons served on Modiba to account in court for the allegations and to provide proof, but our lawyers have been unable to locate him.

The interview, which at the time of writing had not been posted to The Insight Factor’s playlist on YouTube, was released in tantalising teasers on Modiba’s Twitter feed.

In one snippet, Hlophe says the investigation into his alleged involvement in an assassination plot against his deputy, Patricia Goliath, was “a desperate attempt to tarnish my reputation”.

“It will not fly. Why would I want to kill a non-entity and make her a martyr?” asked Hlophe. 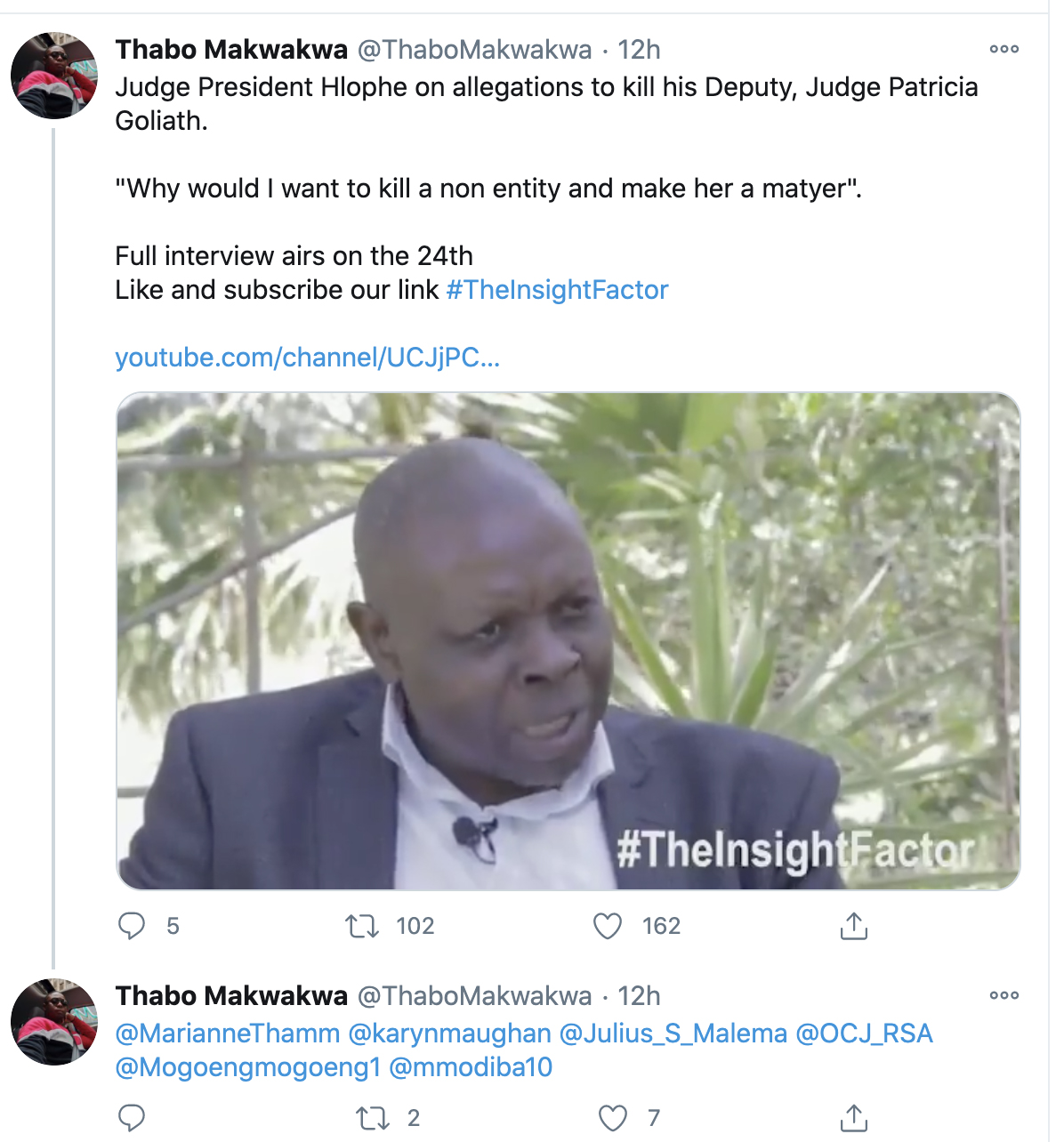 In another edit, Hlophe accuses his boss, Mogoeng, of instigating a complaint [to the Judicial Service Commission] against him [Hlophe].

“Through Patricia Goliath, he encouraged Judge [Mushtak] Parker to file a false complaint of assault against me. Judge Parker has gone public and has denied that he was assaulted by me,” Hlophe said.

What Hlophe is suggesting is that the Chief Justice is guilty of perjury, a grievous offence for a judge.

The Judicial Service Commission has since announced that Judge Mushtak Parker will face a Judicial Conduct Tribunal on charges of gross misconduct. It advised that Parker be suspended by President Cyril Ramaphosa.

In his own affidavit, which he entrusted to a fellow judge for safekeeping for more than a year, Parker set out events that took place in his chambers on 25 February 2019.

Parker stated that he was alone when Hlophe had entered around noon and had accused him of being a racist and of wanting “to screw his wife”. (Judge Gayaat Salie-Hlophe.)

Parker said he had fallen to the ground “and in so doing broke the key that was in the cupboard housing some of my legal books”.

The interview with Modiba promises to cover a range of issues troubling the Judge President.

In another clip from the interview, Hlophe sets himself up as a champion of the landless, saying people had been robbed of their dignity.

This is from the same judge who in 2008 ordered the eviction of 20,000 “illegal occupants”, as he termed them, from the Joe Slovo informal settlement in Cape Town to make way for a government housing project. Hlophe did so without ordering alternative accommodation or relocation, as the law requires.

The matter made it all the way to the Constitutional Court, where Hlophe’s order was searingly criticised, set aside and replaced with one which took the needs of the evicted “illegal occupants” into account.

Hlophe had not considered the future of the residents in that matter.

In The Insight Factor clip, Hlophe seems to have forgotten his 2008 order and said to Modiba, “these people have no land, they have no dignity, they sleep under bridges, it is cold, they are desperate…

“They will see an empty piece of land and move in and put up in an informal settlement.

“By the way, I hate the word ‘shack’. These are residences, it is our people who live there and we must give them dignity. If we continue to say these are shacks, it is derogatory. I prefer to call it a house,” said Hlophe.

Daily Maverick has sent questions to Chief Justice Mogoeng’s office about the serious allegations made against him by a Judge President. We had not received a response at the time of writing.

Modiba and his media partner, Thabo Makwakwa, describe the channel, which went live on 15 October 2020, but not really (as nothing is up as of yet), as “an independent, impartial and uncensored show. It is a subsidiary of a non-profit organization who’s [sic] portfolio includes a media wing that promotes fairness in media reporting.”

Makwakwa has previously described himself as “a student activist, revolutionary, writer”. He was once the deputy chairperson of the Gauteng Economic Freedom Fighters’ “Students Command”.

Today he describes himself on LinkedIn as “a Director at Tangaana Consultancy. External Board Chairperson at House Otto. Social commentator and co-presenter of a talk show, interviewing influential people in the South Africa [sic].”

Makwakwa has been punting the “must-watch two-hour” interview to go out later this month.

The duo on YouTube has set up their media empire, they say, “to have a parallel voice in existing media”.

A parallel voice in a parallel universe. DM

PS, Mr Modiba, if you read this, please do get in touch. We are trying really hard to serve that summons on you, and give you an opportunity to prove your claims in a court of law. As you apparently do have access to the Judge President of the Western Cape, it should not inconvenience you too much to see another judge.