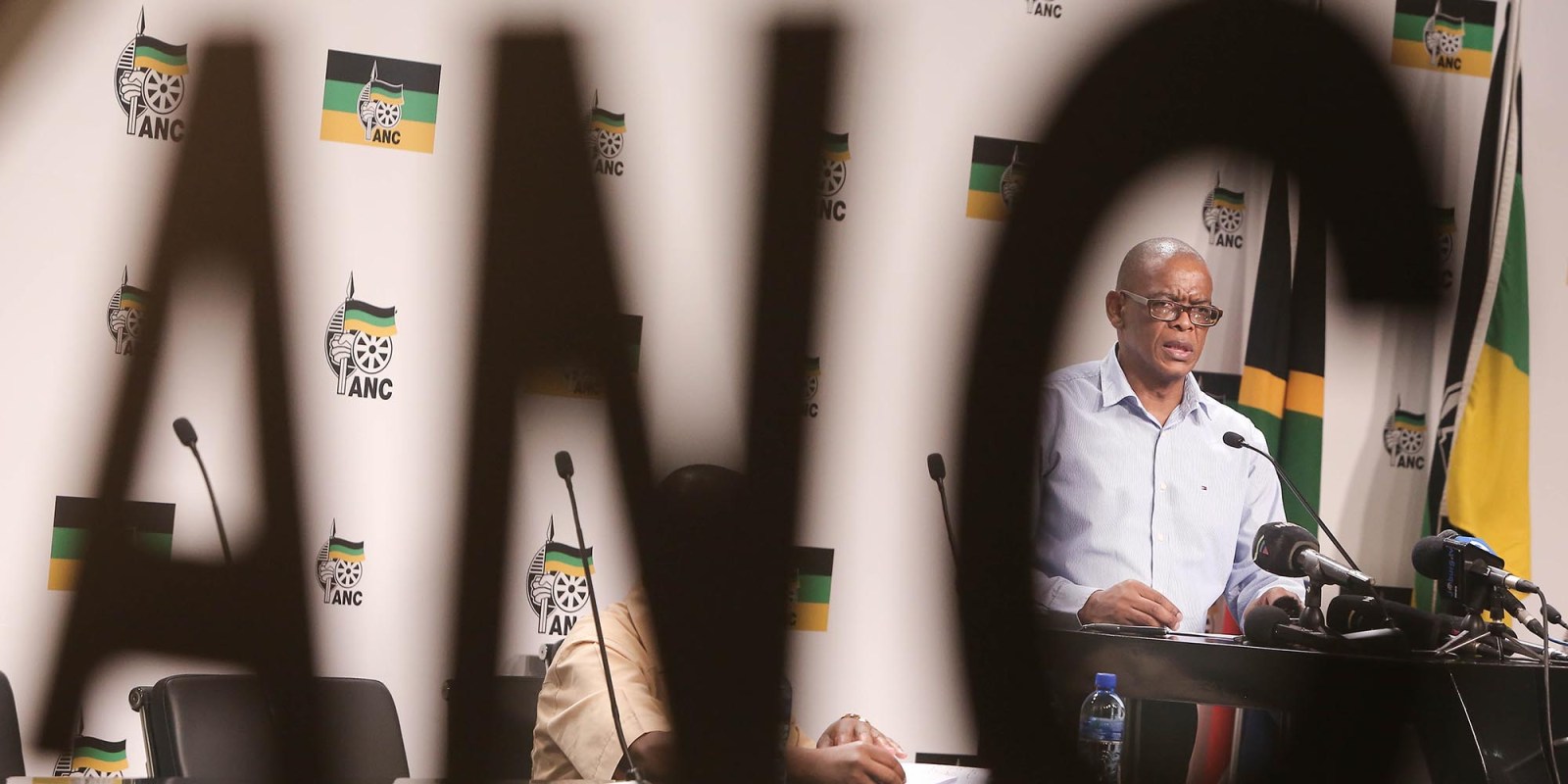 Few of ANC Secretary-General Ace Magashule’s supporters have publicly come to his defence after he was suspended by the party, but his real level of support can only be measured once he indicates how he plans to fight his temporary removal.

When former ANC Youth League president Julius Malema appeared at a party disciplinary hearing at Luthuli House in August 2011, his supporters flocked to his defence. The police fired stun grenades and used a water cannon as Malema’s faithful threw rocks and bottles.

While Ace Magashule is no Malema and the ANC secretary-general still appears to be strategising on his response to his suspension, anyone expecting to see similar scenes outside the party’s headquarters in Johannesburg on Thursday would have been disappointed.

Not a single person appeared to visit Luthuli House in support of Magashule on Thursday. Daily Maverick left Luthuli House in the late afternoon when it became clear that the party’s attention was focused on Cape Town, where President Cyril Ramaphosa was speaking in Parliament.

Numerous ANC staff members at Luthuli House that Daily Maverick spoke to, however, said they would like to move on from the Magashule saga. They claimed he was bossy and tried to take on Ramaphosa without sufficient political clout.

News of Magashule’s suspension from his position was leaked on Wednesday. His deputy, Jessie Duarte, informed him in a letter that he would be temporarily suspended pending his corruption case in the Bloemfontein High Court regarding a R255-million Free State asbestos tender.

Magashule sent Ramaphosa a letter of his own, informing Ramaphosa that he was suspended due to allegations of vote-buying ahead of the ANC’s 2017 Nasrec conference.

Magashule’s counter-suspension, however, which may have been backdated, goes against party rules as he does not have the power to act against Ramaphosa without instruction from the National Executive Committee (NEC) or National Working Committee (NWC).

Magashule has tried to expand the parameters of the ANC’s step-aside rule to include all members facing allegations of impropriety (thus, including Ramaphosa) rather than only those facing criminal charges, and he and his supporters are likely to push the matter at this weekend’s NEC meeting.

But the muted response to Magashule’s suspension, which has been on the cards since an arrest warrant was issued in November 2020, could suggest the secretary-general lacks sufficient support to mount a wide-scale fightback campaign to keep his powerful position.

Magashule told Eyewitness News that he would remain in his job while he appeals against his suspension. “As the ANC, we have suspended Cyril [Ramaphosa],” he maintained.

Ramaphosa reportedly told ANC MPs in Parliament that he was shocked and dismayed by Magashule’s attempt to suspend him.

Beyond his attempt to suspend the president, it’s unclear how Magashule and his supporters plan to challenge his temporary removal from office.

The NEC elected in December 2017 was largely split between candidates on lists from the camps of Ramaphosa and Nkosazana Dlamini Zuma, whom Magashule supported. Ramaphosa appeared to enjoy a slight majority, and recent NEC meetings suggest he has increased his support in the party’s highest decision-making body between conferences.

NEC member Tony Yengeni has been on a media tour to defend the secretary-general, questioning whether Duarte had a mandate from the NEC or NWC to issue Magashule’s suspension notice.

ANC Umkhonto we Sizwe Military Veterans’ Association (MKMVA) spokesperson Carl Niehaus also said he would stand with Magashule, tweeting, “as I stand by all my comrades & friends throughout good & bad times. I know what comradeship demands. Loyalty is part of my DNA.”

But many of the secretary-general’s apparent allies have so far been silent. Ekurhuleni regional chairperson Mzwandile Masina took to Twitter to deny an article claiming he had expressed support for Magashule. MKMVA leader Kebby Maphatsoe has been silent, as has ANC Women’s League leader Bathabile Dlamini.

Magashule’s “Radical Economic Transformation” faction of the party is largely a coalition of the wounded, uniting Zuma supporters who have been sidelined under Ramaphosa’s leadership or who are facing potential criminal charges for their alleged role in corruption during the former president’s two terms in office.

Magashule, who is expected to address the media this week, tweeted a picture of himself playing chess on Wednesday. Whether he has the support to defy or overturn his suspension is likely to be measured only once he has given his orders to his supporters, but it looks as if he has few chess moves available. DM