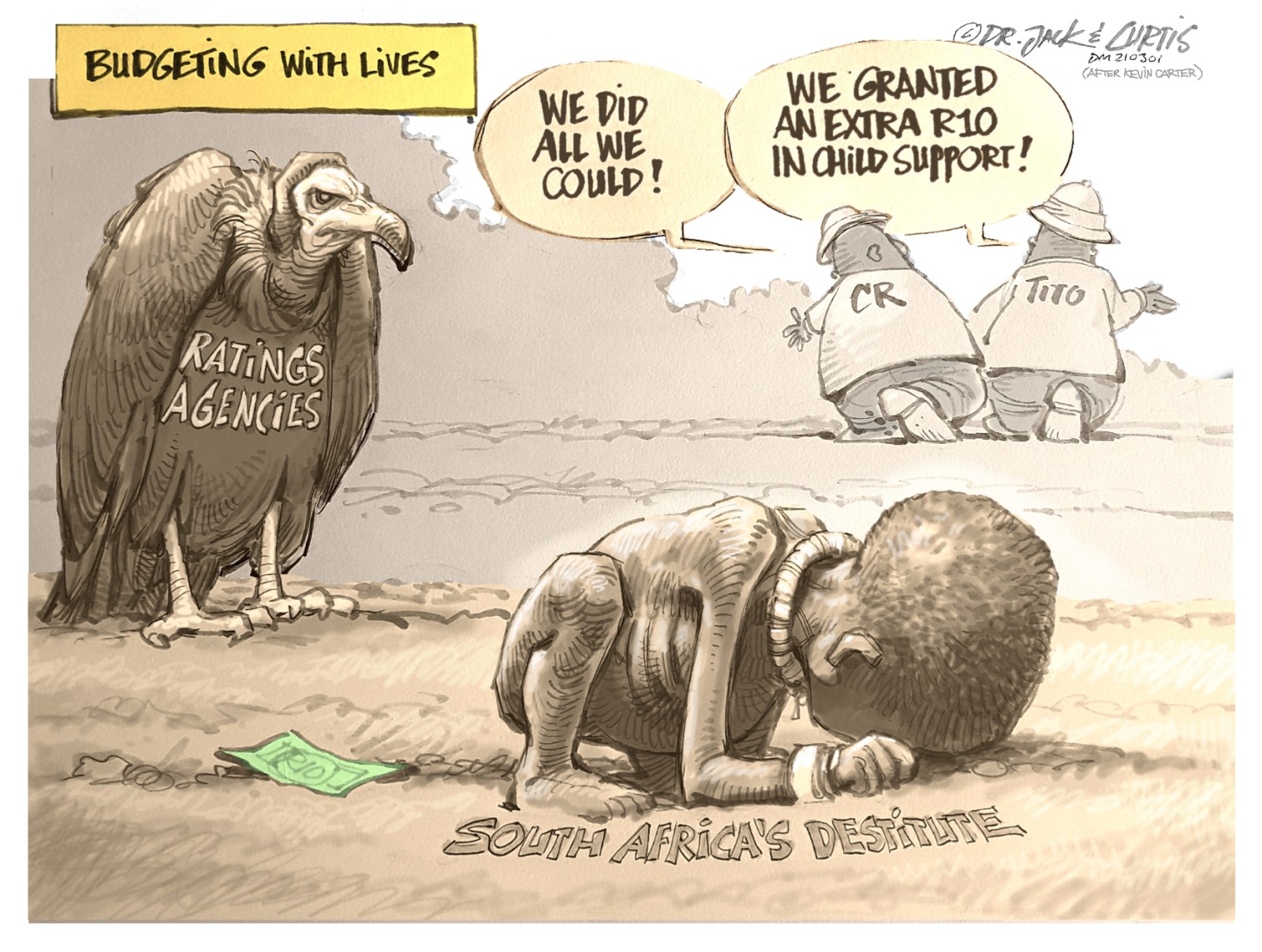 ‘From ancient Mesopotamia right down to present day London, the ascent of money has been an indispensable part of the ascent of man, but money’s rise has never been a smooth upward ride. Financial history has repeatedly been interrupted by gut-wrenching crises… The power of finance is everywhere we look and it affects all of our lives” Niall Ferguson, The Ascent of Money.

On Saturday, 1 May, Workers’ Day, the government cut off a lifeline to six million people when it ended the Covid-19 Social Relief of Distress grant.

The next day life went on as normal for the wealthy and those who cut the line.

But it did not go on as normal for the poor. The decision to cut the grant, on the grounds that there is not enough money for it, means that to stay alive its recipients will now have to steal, beg or starve. In the context of the social and economic crisis created by Covid-19 it is arguably a betrayal of the constitutional right of “everyone to social security, including, if they are unable to support themselves and their dependants, appropriate social assistance”.

That the government should cut six million people’s only income on the eve of Workers’ Day, a day that symbolises international solidarity, merely added insult to injury. But that didn’t stop President Cyril Ramaphosa waxing lyrical before a Cosatu May Day rally, calling it a “day to remind ourselves of the eternal slogan of the working class that ‘an injury to one is an injury to all’”.

Tell that to the children in Richtersveld who reportedly eat river mud on weekends to staunch the ache in their bellies.

How are we to understand such cold hearts? Why is the uproar only in civil society and not in the business community? What underlies such decisions and are they really beyond challenge?

Last week, there were protests organised by civil society to try to get the government to extend the grant until it introduces a Basic Income Guarantee. But they were ignored by the government. At a webinar, Professor Thuli Madonsela blamed the crisis of burgeoning poverty on capitalism. She said that in the face of escalating inequality, and arguments that South Africa can’t afford to honour its constitutional obligations, that it is time to “rethink capitalism”.

Madonsela is one of the most revered people in South Africa. Her popularity, earned for her bravery and integrity, cuts across class, race and gender in this country. South African business and the government should think carefully about what she is saying. She cannot be dismissed as a raving loony of the ultra-left.

It is obvious that capitalism has failed in South Africa and many other countries of the world. Money, which has had a checkered role throughout human history, but nonetheless played a useful role in exchange and development, now works against social justice and development. It piles indignity upon indignity for the poor.

The capitalist market excludes far more people than it includes, and as unemployment grows and taxation shrinks, the list of constitutional rights which South Africa can no longer afford because there is no money, grows by the day. We are defaulting on our Constitution and the consequences will be dire.

There is no money to fix our broken water infrastructure.

There is no money for essential healthcare services.

There is no money for palliative care for one million children living with pain and debilitating illnesses.

There is no money to eradicate school pit toilets in Limpopo.

There is no money for sufficient food and social security.

The “no money” defence is leading us inexorably towards state failure and social conflict.

Yet, the truth is there is lots of money. It’s just not in the hands of the government and the government is not prepared to claim it in the public interest because in South Africa we suffer from a terror of finance.

In Madonsela’s speech, as well as that by UCT academic Professor Vivienne Taylor, she suggested that claiming “no funds available” doesn’t override the constitutional obligation to meet basic needs. Our Constitution, not Treasury or ratings agencies, is the supreme law and must shape how the government responds to the Covid-19 crisis.

Both Taylor and Madonsela called a Basic Income Guarantee a “legal, political and moral imperative”.

However, the problem isn’t limited to the claim that there’s no money available to preserve basic human dignity. It is also that capitalism, by its behaviours, is simultaneously accelerating a crisis that is putting more and more pressure on our state (and governments all over the world) to spend money they claim they don’t have to respond to its ravages on the climate, the planet and human beings.

In his 2020 bestselling novel, The Ministry for the Future, Kim Stanley Robinson fictionalises our near future – the next 50 years, basically. He depicts the collapse of the climate and the failure of political leaders, the banks and fossil fuel industry in particular, to change their behaviours to mitigate the crisis – until it is too late. Robinson calls this “death capitalism”, referring back to Wagner’s opera Götterdämmerung “which ends with the old gods of the pre-Christian Norse mythology destroying the world as they die, in a final murderous and suicidal auto-da-fé”.

Robinson’s narrator points out that those who are inflicted with Götterdämmerung Syndrome “are usually privileged and entitled, and they become extremely angry when their privileges and sense of entitlement are being taken away. If then their choice gets reduced to admitting they are in error or destroying the world, a reduction they often feel to be the case, the obvious choice for them is to destroy the world; for they cannot admit that they have ever erred.”

In some parts of the world it seems that politicians might be beginning to understand that business as usual is a literal recipe for disaster.

Unexpectedly, the US is one of them. President Joe Biden’s efforts to steer capitalism in a different direction may not go far enough for Bernie Sanders and Alexandria Ocasio-Cortez, but his call for a universal corporate rate of taxation, his clean energy and green infrastructure plan, and even indications that the Biden administration might yet support a waiver of the World Trade Organisation’s rules on Intellectual Property during the Covid crisis, all point to a leader who has realised that capitalism can’t continue in the old way. His strategy to counter populism and nascent facism is to reinvest in people’s dignity.

In South Africa there is no similar sign of urgency, humanity or courageous economic thinking from either business or the government. There is no recognition of a legal “imperative” to change. Instead we are in a quagmire of rhetoric, corruption, plans and commissions – all of which serve the horrifying status quo.

It is sad that the government and business do not listen meaningfully to activists in civil society. If they did they might find some energy, ideas and even allies. Our country and our Constitution would be better for it. And children in the Richtersveld might no longer need to eat sand. DM/MC