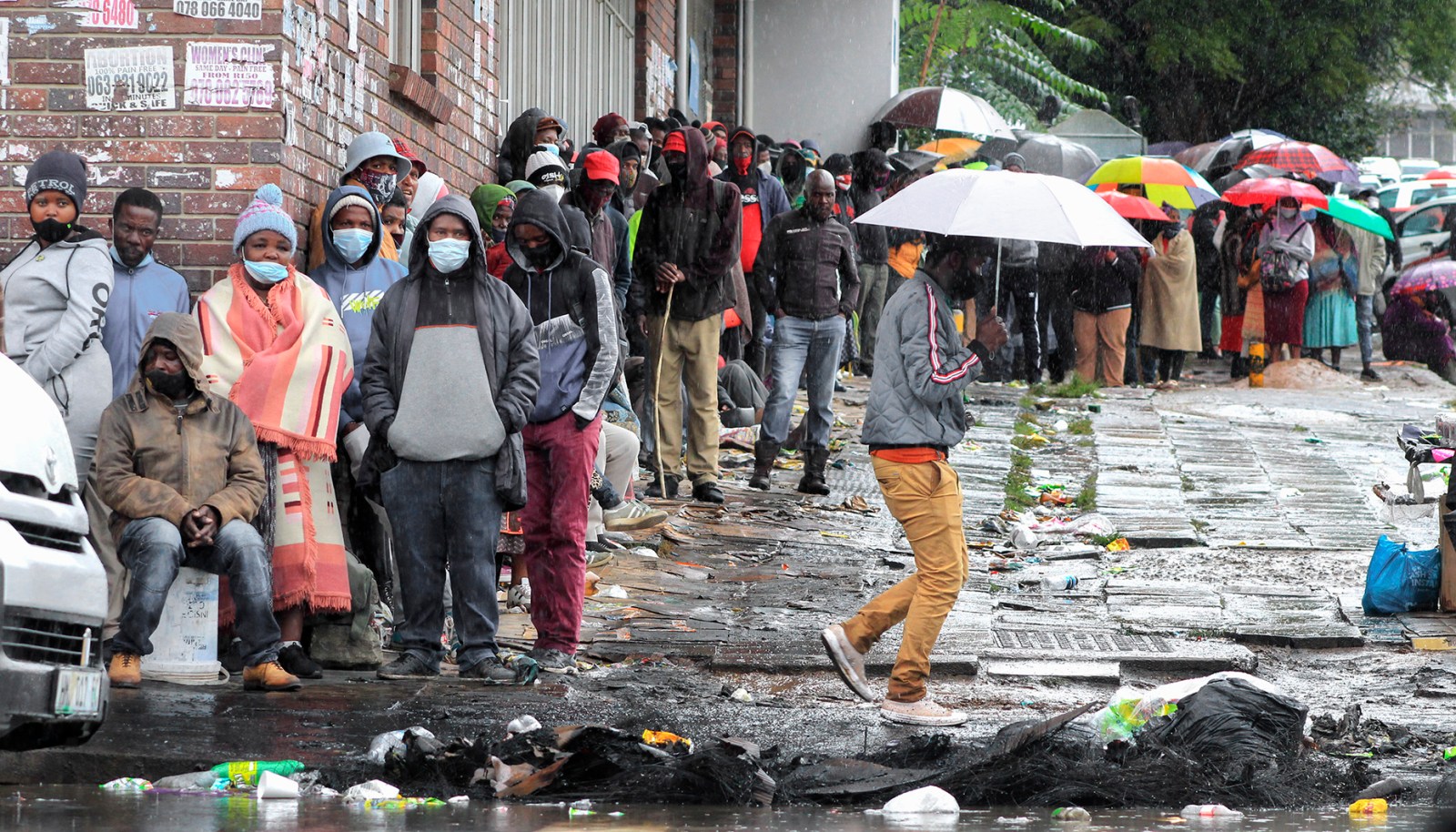 Hundreds of people were queueing outside the Mthatha Post Office in pouring rain to try and collect their grant. People pay between R50 and R100 to be at the front of the queue to collect their Covid-19 R350 grants at Mthatha’s main post office. (Photo: Hoseya Jubase)

As the date for the last payment of the Covid-19 Social Relief of Distress grant arrived, thousands of people around the country began queuing at Post Offices. Civil society organisations and unions called for the government to extend the grant and held demonstrations and pickets on Friday.

Rain and cold weather was not enough to keep hundreds of people from queuing outside Post Offices around the country to collect the last payment of the R350 Covid-19 Social Relief of Distress (SRD) grant.

The South African Social Security Agency (SASSA) SRD grant was implemented in May 2020, to be paid to individuals who were unemployed and did not receive any income, social grant or UIF payment.

In a statement on Thursday night, SASSA reminded people that the “350 Grant” would come to an end on Friday 30 April.

“This means that no new applications will be accepted after this date. However, all applications which have been approved and who have not yet received the money will still be paid,” read the statement.

SRD applicants and recipients whose grant was declined for the period from February to March 2021 may appeal on the SASSA website, it said.

“If you do not appeal, the declined application will not be reconsidered.”

The R350 grant is coming to an end tomorrow.#SASSACARES pic.twitter.com/AOdID0RoFN

At the Rondebosch Post Office in Cape Town on Friday morning many grant recipients were queuing inside Riverside Mall, while others gathered in crowds outside on the pavements along both Rosendale and Roslyn roads.

Taxis and cabs wove through the crowds, picking up and dropping off passengers travelling to collect their last SRD payout.

People had started gathering outside Riverside Mall from about 7am, waiting for the Post Office to open at 8am, head of mall security Vincent Mhelembe told Daily Maverick.

SRD recipient Nasisipho Nakile, who lives in Nyanga East, arrived at 9.30am and joined the queue. He had already been waiting for more than an hour when Daily Maverick approached him.

Nakile said he was “worried” about the grant coming to an end.

“It makes me unhappy because that money helps us,” he said. “I don’t have any work; I depend on this money.”

Nakile said he had been surviving on the grant since it was introduced last year, but was actively looking for a job.

Others in the queue voiced concern about where their next meals would come from without the SRD assistance.

Severe storms and a cold snap in Eastern Cape failed to keep thousands of people away from Post Offices in that province.

A woman who asked not to be named said she was hoping to get some money. “I have been here many times but everytime I ask there is nothing here for me.”

Earl Piet, a community leader in Gqeberha’s Northern Areas, said the R350 could sustain a family for a few days. “Although some used it to buy drugs and alcohol,” he added.

“Today is the end day for the grant. We are mobilising people through word of mouth. They must not kill the grant. They must carry on and convert it to a basic income grant,” said Mateta.

“We also want the government to include the caregivers in this grant. Women have been very hard hit by this pandemic and they are suffering but the caregivers are told they can’t get the grant because they are getting the SASSA grant. But they are really struggling.

“Most people are using the R350 for food and basic things for the household.”

People in line at Mthatha Post Office pleaded for the government to intervene to extend the R350 grants.

Many of them were young and unemployed and some said they had arrived on Thursday night and made fires with wood and plastic to keep themselves warm while sleeping outside to ensure they were at the head of the queue on Friday.

Some said they were homeless and survived by collecting food from waste bins. Many feared retribution from government officials if they were named in media reports.

Asisipho Nongemane said she was very worried as the money had assisted her greatly.

“At least there was something to eat at home,” she said. “We are standing in the rain but we are here for the money. It is painful to me,” she said.

Nongemane said many of the young people were from villages around Mthatha and there was nobody with an income in their homes. The R350 grant was assisting them to buy a few groceries.

More than 300 residents from Alra Park in Nigel, Ekurhuleni, queued from the early hours of Friday. They said the Nigel Post Office only served 150 people a day and sometimes they stood in the queue for hours only to go home empty handed. This has resulted in a backlog of payments and they were not sure if they would ever get pending grant money. They were convinced that ending the grant would see a rebirth of crime in their area.

Civil society organisations and unions called for the government to extend the SRD grant, with demonstrations and pickets organised at Post Offices and SASSA offices across the country.

“We want the 350 [grant] to be extended — and not just extended, it has to be increased as well,” a #PayTheGrants campaign spokesperson in Western Cape, Bravo Thompson, told Daily Maverick. With an increase in food prices, the R350 was not enough to sustain one person without an income, he explained.

Thompson was one his way to the SASSA offices in Belgravia, Cape Town, where the #PayTheGrants campaign held a picket from 10am.

The Black Sash human rights group and C19 People’s Coalition (C19PC) for #PayTheGrants held a virtual press conference on Thursday about the termination of grants. They were joined by representatives of faith-based organisations, trade unions and civic groups.

The Black Sash raised a number of demands, including:

According to a C19 People’s Coalition statement on Friday: “[An] Open Letter by Black Sash, C19PC, and the wider #PayTheGrants campaign was delivered physically to the Department of Social Development, South African Social Security Agency, and also sent to the President of RSA, and Minister of Finance on Thursday, 22nd April 2021.”

C19PC said that no reply from President Cyril Ramaphosa, Minister of Finance Tito Mboweni or SASSA  had been received.

Despite the Department of Social Development “acknowledging the letter and indicating internal discussions regarding the matter”, C19PC said “no substantial response nor meaningful engagement has been received or offered”.

Bishop Victor Phalana of the Catholic Church said, in a message of support for the Black Sash’s campaign to pressure the government into extending the grant, that the R350 gave many women control over a little bit of money in caring for a family.

“In many respects this can contribute to stop transactional sex,” he said.

“Everyone has the right of access to social security if they are unable to support themselves.” DM