Djibouti looks to Ethiopia in effort to gauge its economic future

By Selam Tadesse Demissie for ISS Today• 3 May 2021 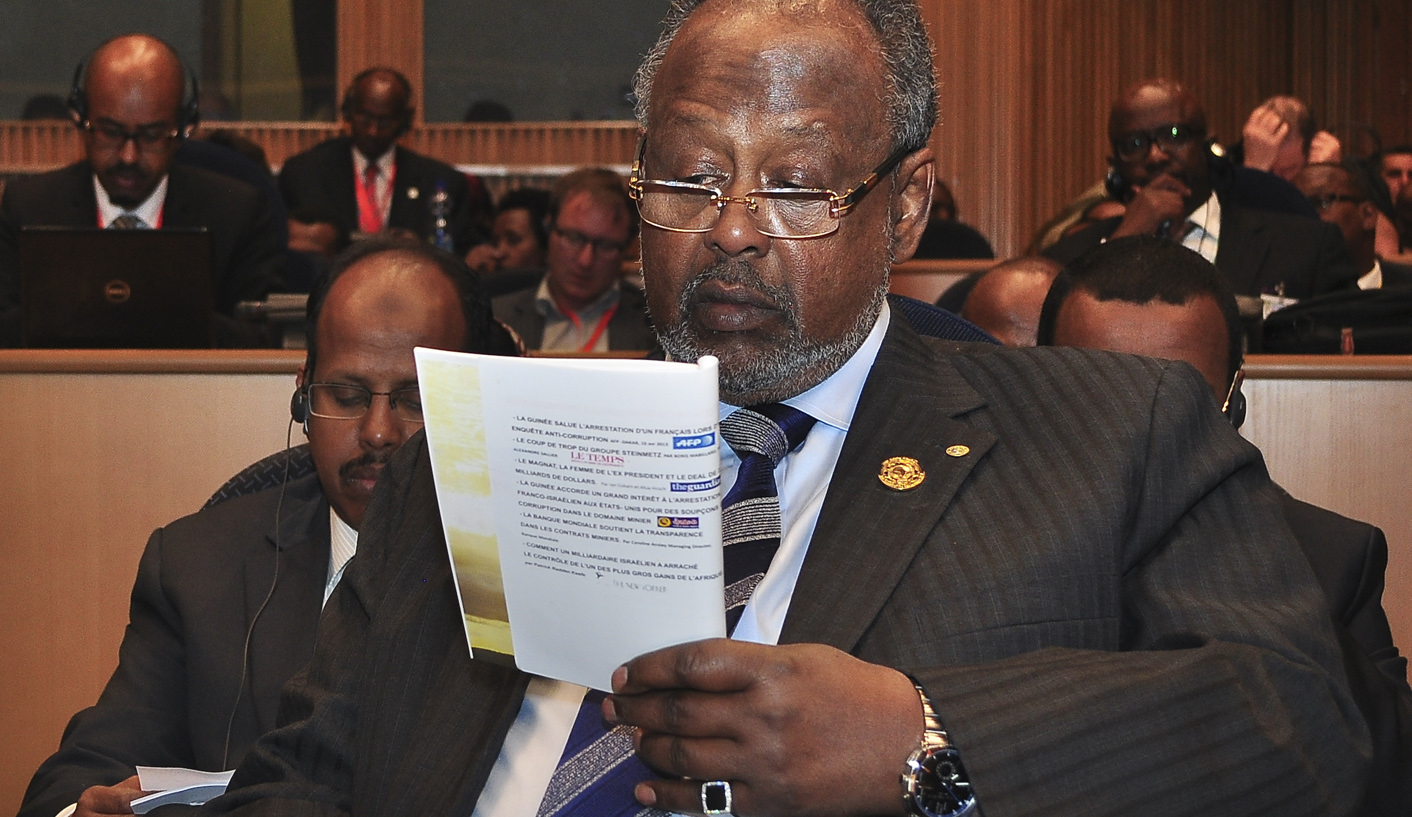 President of Djibouti Ismail Omar Guelleh attends the meeting of the Peace and Security Council at the African Union Headquarters in Addis Ababa. (Photo: Supplied by ISS Today)

President Guelleh’s controversial fifth term is more likely to be tested by regional than domestic challenges, yet his leadership may face economic constraints due to recent regional shifts, particularly related to its key financial partner of Ethiopia.

Djibouti’s president Ismaïl Omar Guelleh, who has been in power for 22 years, won a fifth term in office by a landslide 98% of votes. The country’s political opposition criticised the 9 April election process for lacking transparency and fairness.

Guelleh’s new term isn’t likely to face significant challenges internally. And the international community shows little interest in Djibouti’s lack of democratisation. The political opposition is weak due to a repressive state, and so can’t constructively take issue with the government. Freedom of the press as a platform for alternative public views and criticism of authorities is also lacking.

However, it won’t be plain sailing for Guelleh. His leadership may face economic constraints due to recent regional shifts, particularly related to its key financial partner – Ethiopia. These developments could worsen internal socio-economic grievances.

Djibouti’s economy and 85% of its gross domestic product rely on the service sector, which includes port, logistics and related services. This sector revolves around the country’s strategic location as a Red Sea transit point on the world’s busiest shipping lanes connecting Europe, the Middle East and Asia. Its geopolitical location, coupled with the global war on terror and piracy in the waters off Somalia’s coast, has also made Djibouti a desirable location for foreign military bases.

But this could all be disrupted by changes in the economy of its biggest customer – Ethiopia. Djibouti has provided the principal maritime harbour for imports and exports to and from landlocked Ethiopia since 1999. 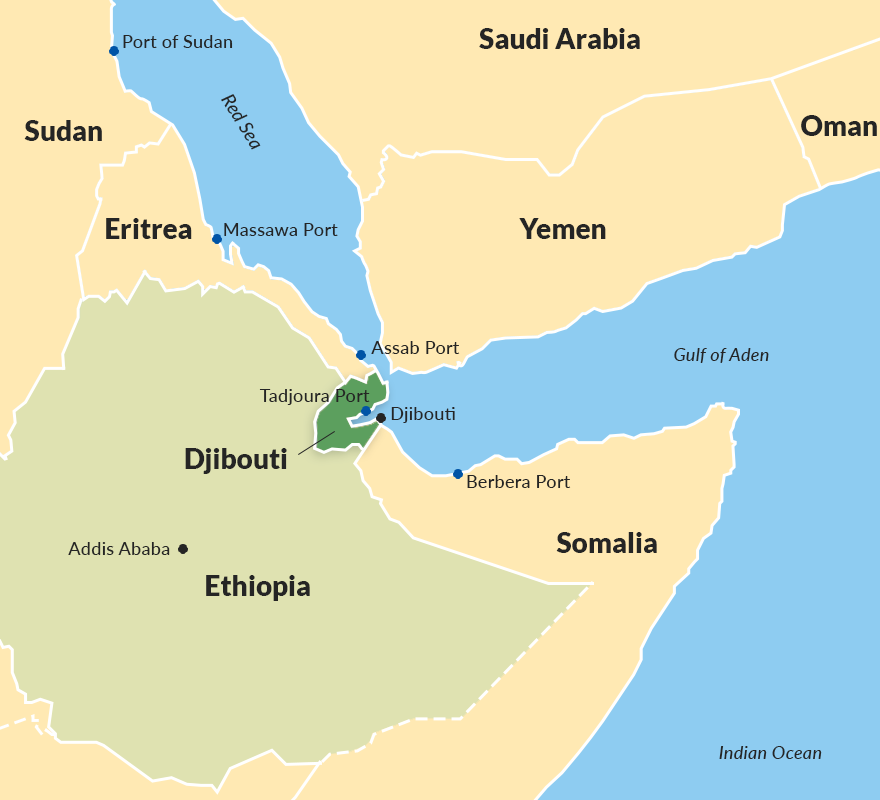 A country of 112 million people, Ethiopia relies on Djibouti’s port and transport-related infrastructure for 95% of its maritime trade. According to the World Bank, in 2013 85% of Djibouti’s port activities derived from Ethiopia’s import and export transactions. Not much has changed since, with Ethiopia contributing substantially to Djibouti’s overall economic growth.

Any disruption in Ethiopia’s economy will hurt Djibouti. At the same time, Djibouti’s stability is critical to Ethiopia’s economic well-being, indicating the interdependence of the two Horn of Africa countries, both economically and regarding security. Given their ties, two regional developments could damage Djibouti’s economy if they slow down financial contact with Ethiopia.

The first potential problem is political instability in Ethiopia. Beyond the adverse effects of Covid-19 on Ethiopia’s trade in 2020, the political disruption associated with recent social unrest will weaken its economy, at least in the short term.

Extensive ethnic-based violence across the country, and the subsequent destruction of business properties and internal displacement, means the government will struggle to implement its 10-year development plan that guarantees private sector-led growth. In this uncertain economic environment, risks are raised and investments will likely reduce.

The upheaval related to the recent Tigray conflict also puts pressure on Ethiopia’s economy. If the instability in the northern part of the country persists, business uncertainty will rise, and trade and transactions will suffer. Overall, the crisis will negatively impact economic growth through less foreign direct investment, tourism and exports.

This will, in turn, dampen Djibouti’s economic prospects in the short term. According to the International Monetary Fund, Djibouti experienced a 1% slowdown in economic performance in 2020 but is predicted to grow by 6% in the coming years. However, this forecast is based on Ethiopia’s rapid expansion in trade and private investment – which now seems unlikely. Concerns about the effects on Djibouti’s economy are shared by the country’s Finance Minister Ilyas Dawaleh.

The second regional development that could affect Djibouti relates to Ethiopia’s policy of diversifying its port connections. Ethiopia is aware of the danger of relying on one outlet, as exemplified in the 1990s when it went to war with its neighbour Eritrea – then Ethiopia’s main route to the sea. This 1998–2000 war led to Djibouti emerging as Ethiopia’s primary outlet for its trade.

The Ethiopian government has bought a 19% stake in Berbera Port in Somaliland to diversify its maritime outlets. Developments are also underway to use the Ports of Massawa and Assab in Eritrea. And Ethiopia has expressed interest in Port Sudan in Sudan.

Ethiopia’s rapprochement with Eritrea and the opportunity to use the latter’s harbours could help Ethiopia diversify its sea outlets. The construction of the Melodoni-Manda-Bure road project, which connects Ethiopia with Eritrea’s port of Assab and serves as an alternative route to Ethiopia’s foreign market, officially started in January.

Berbera Port in Somaliland is another option. In March 2018, Dubai Ports World, Somaliland’s administration and Ethiopia signed an agreement for shared port management, with Ethiopia having a 19% share. The port is under development and expansion, with a road being constructed between the port and Ethiopia.

Djibouti currently retains a significant infrastructural advantage over its potential port competitors in the region. But its port services have become expensive over the years and may lead to Ethiopia seeking alternative options. This could impact Djibouti’s economic performance in the medium to longer terms.

Instability in Ethiopia, coupled with its diversification of port outlets, could undermine Djibouti’s economic prospects during Guelleh’s fifth term. With a high unemployment rate and cost of living, further financial pressures could pave the way for socio-economic grievances. Djibouti’s new administration will need to consider these threats to avert instability in the country. DM