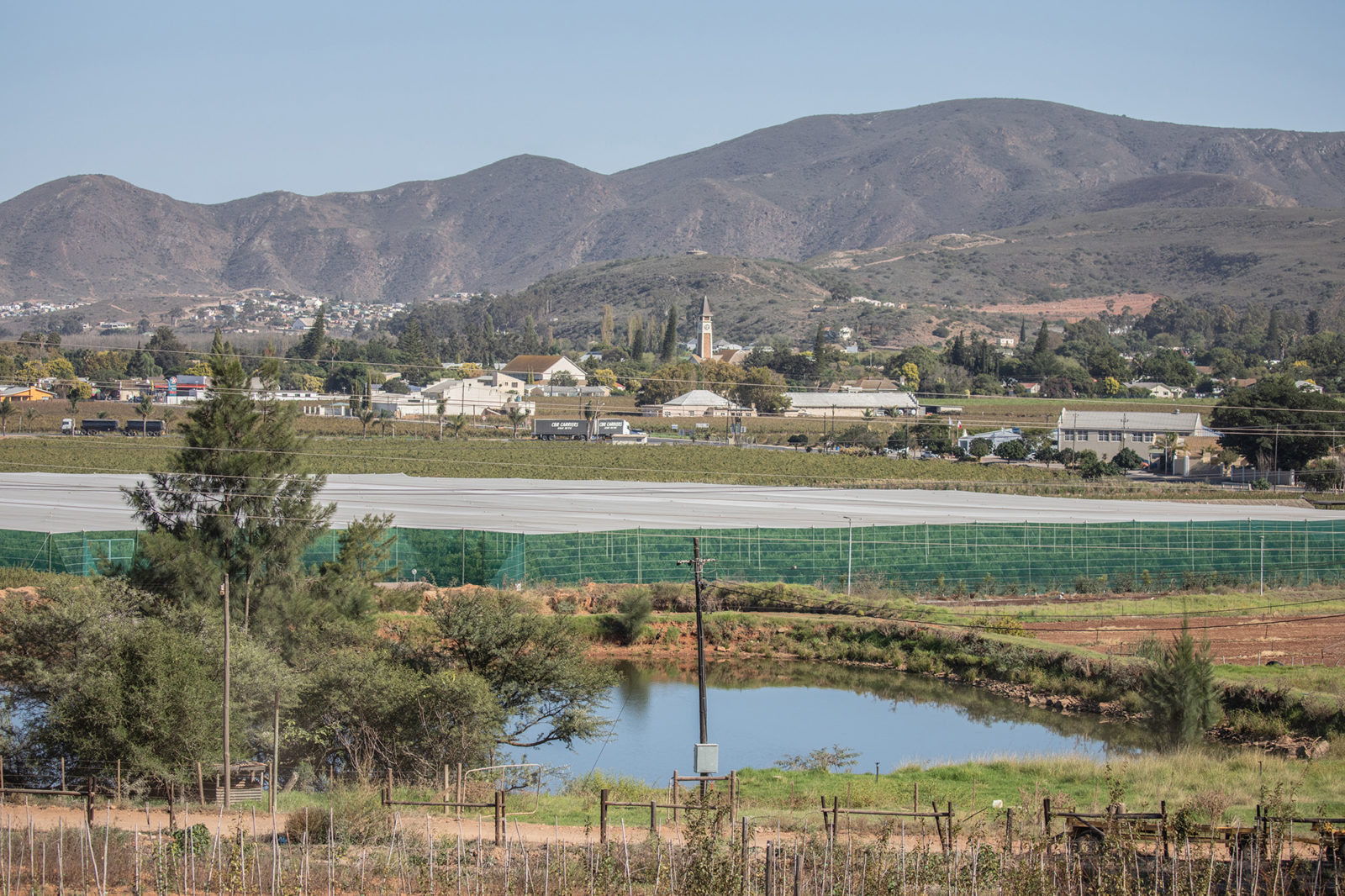 The Western Cape town of Bonnievale is nestled between Robertson, Montagu and Swellendam in the Breede Valley. (Photo: Victoria O’Regan)

More than six weeks after an unknown number of crocodiles escaped from a commercial farm in the Breede River, the search to recapture all of them continues. We visited the tourist valley, which is hoping for an uptick in visitors after taking a severe beating during the extended pandemic lockdown.

On 3 March, CapeNature issued a statement on the escape. Corné Claasen, the operations manager at CapeNature, said when the owner alerted CapeNature about the escape, the agency sprung into action.

“It sounded unbelievable, but we had to deal with the situation,” he said. CapeNature immediately started working with the South African Police Service (SAPS) and landowners to start setting up traps. Then a WhatsApp group was started, Claasen said, “to get information out, and to prevent panic and the spreading of rumours”. A diving unit from the SAPS was also involved in the search.

The crocodiles are subadults, ranging from 1.2 metres to 1.5 metres in length and are bred in a facility in Bonnievale. “From that perspective, they’re not that dangerous, but with children – you don’t want them to encounter crocodiles,” said Claasen. Warning alerts were issued to exercise caution and avoid swimming or fishing in the rivers within a 5km radius of where the crocodiles escaped.

Thus far, 82 crocodiles have been recaptured: 32 were live captured and 50 were euthanised. Claasen said the euthanisation was the “last resort”, but this was due to the risk that the crocodiles could potentially pose to the area’s biodiversity.

There are growing concerns about the coming winter months, as these crocodiles aren’t indigenous to the province’s climate. “Naturally, crocodiles don’t occur in the Western Cape – the climate is not conducive to their survival, so they never historically spread to the Western Cape,” said Claasen.

Nile crocodiles are commonly found in northern and northeastern sections of South Africa, not in the south, where weather conditions are much cooler. Claasen confirmed this facility is the only one within the Breede Valley.

Bonnievale is nestled between Robertson, Montagu and Swellendam in the Breede Valley, a popular inland destination known for its mountain trails, 4×4 trails and river activities such as canoeing.

Claasen gave advice to parents coming to the area over the coming school holidays: “We advise the public not to swim or fish in the river.”

He confirmed that the owner of the facility – on a farm called Jan Hoppie – had permits for the breeding, but an investigation had been conducted into the escape. The investigation was completed and Claasen was waiting for the next steps from CapeNature.

Claasen confirmed that the owner of the escaped crocodiles had cooperated during the investigation.

The outcome of the investigation should elicit some clarity on unanswered questions, including how the crocodiles escaped and how many there were altogether. For instance, right now, CapeNature is not sure how many are still on the loose.

But the search is ongoing for more crocodiles in the Breede River, with CapeNature identifying a 5km area to search in stagnant pools of water and riverbanks.

“Certainly, from our side, we haven’t seen any aggression from them when we approach them. They’re always trying to get away – either into the water or into dense vegetation,” said Claasen.

The crocodiles would then stay submerged in deeper waters until it is safe to come up again, he said.

Crocodiles are nocturnal and their eyes reflect red when seen through lights, which is why searches for them take place at night, but media are not allowed to join in the search. During DM168’s visit, we spotted several police diving vans in the area. According to CapeNature, patrol boats were deployed with the help of police divers to assist in the searches.

But there was a risk with the crocodiles: the upcoming winter season could see flash floods. Claasen said the crocodiles could have more potential to spread within the 5km radius they’re currently in. “Our priority is to get them out of the system as quick as possible, because they’re a risk to biodiversity. They’re not native to the area. They’re not part of the ecosystem.”

Another method to recapture the crocs has been setting up humane baits – up to 10 baits – with chicken (the food fed to the animals). But only one has been caught in this way.

The recaptured crocodiles and the euthanised ones are returned to the owner, said Claasen.

They have not set a cut-off date for the recapture expedition. “We haven’t made a determination yet, but my feeling would be quite a period of two to three months of no reported sights before one can consider to terminate the whole operation,” said Claasen.

The breeding facility in Bonnievale is about a two-and-a-half-hour’s drive from Cape Town. A little sign at the entrance of a dirt road indicates the name of the Jan Hoppie farm. There are vineyards upon vineyards with workers scuttled around the property. There was no glimpse of any crocodiles, except for a large tented area, hidden from view by structures which house farmworkers.

When DM168 approached the farm owner, who was identified as Johan van der Merwe, he declined to speak to us. He claimed media who had initially reported on the crocodile escape had caused panic, which caused the community and local guesthouse owners to resent him.

Besides questions about why and how the crocs escaped, and the total number in all, other unanswered questions include why the owner breeds them and how they got into the river in the first place.

Dr Alison Leslie, a wildlife ecologist and crocodile specialist from the Department of Conservation: Ecology & Entomology in the Faculty of AgriSciences at University of Stellenbosch, told DM168 that crocodiles are primarily bred for leather items and meat, and described the leather market as an “exotic, expensive market”.

Dr Leslie has worked with crocodiles for 25 years and is the regional vice-chair for south and east Africa, Crocodile Specialist Group, at the International Union for Conservation of Nature. She said there are strict regulations around pond sizes and fencing on crocodile farms.

It was “not easy to be a croc farmer and bend the rules”, she said.

The crocodiles could not do with water that was below 10 degree Celsius, which was some of the temperatures experienced in the Breede River during the winter months, said Dr Leslie. In the future, Dr Leslie suggested owners of crocodile farms should ideally double-fence, but better fencing also costs money.

While the search is on for the escaped crocodiles, Bonnievale is trying to recover from the Covid-19 lockdown. The owner of Info Bonnievale, Chantel la Grange, said via a press release, “Bonnievale was put on the map, so to say!”

There were cancellations and postponements, said La Grange, but places were “almost immediately booked again”. She said there were guests who wanted to visit and share the crocodile experience with the community.

Businesses in the tourism sector in Bonnievale were just starting to recover from Covid-19 lockdown when the crocs escaped. “Covid-19 affected tourism industries across the globe, the same in Bonnievale,” La Grange said and added, “with travel restrictions, all our establishments experienced cancellations, and guesthouses and cottages stood empty for a few  months”.

La Grange said no establishment closed permanently due to the Covid-19 lockdown. “We have never, according to my own bookings and experience, had a busier January and February this year,” she said.

But campsites along the river had cancellations, primarily from parents with small children and pets. “We are positive that bookings will pick up again as soon as the green light is given that the river is safe,” said La Grange and added, “our hearts go out to the owners who have been facing a difficult time since the escape, as well as establishments that have experienced financial stress”.

Pierre Albertyn, the owner of Riggton River campsite, which is near the facility where the crocodiles escaped from, told DM168 his business is busiest over the summer season and the Easter long weekend.

Albertyn had to refund customers who booked campsites when the Covid-19 lockdown hit. He said in winter 2020, his business was “very quiet”. In September, when lockdown regulations were lowered, people started to return to the outdoor campsite.

In December, the campsite was 90% full.

When the crocodiles escaped in March, Albertyn described this as “quite upsetting” as he had to refund people who had booked for the Easter long weekend. A few days before Easter, he received bookings from last-minute campers. During the Easter weekend, his campsite was at 60% capacity. He had sent campers a WhatsApp message to inform them there might be crocodiles in the river and also put up a sign near the river to warn about the dangers of escaped crocodiles in the river. “Many people still came and they think it’s funny – they’re not scared.”

“We won’t swim until CapeNature says there are no more crocodiles,” said Albertyn, though he hasn’t seen any of these elusive creatures in the river. “All this big thing about a crocodile and I haven’t seen one,” he said. DM168

Survival of the tourism market

Another business owner, John Barnardt, the CEO of Bonnievale Wines, said the ban on the sale of alcohol – more than anything – impacted his businesses.

Just before South Africa went into its initial 14-day lockdown, Bonnievale Wines started its online shop and, just a few days ago, it recorded 1,000 customers on its website. In September to December, the estate saw record sales. Then again, at the estate, situated just outside the main area of Bonnievale, during February, the company recorded another 61% sales increase against the previous year just on the estate. In March, sales also increased by 53% in comparison with March 2020.

The company had to shift to online sales and word of mouth from customers to attract new clients. This has seen a monthly newsletter and a more customer-centred approach, including sales representatives who have now had to shift from physical tours and tastings with new customers to promoting wines through mediums such as WhatsApp. At the moment, the estate is harvesting grapes and bottling it’s Sauvignon Blanc for the 2021 harvest. DM168