The power to transform the energy sector – and much m...

For almost half a century the supply of cheap and abundant electricity drove the growth of South Africa’s industrial heavy economy. The consumer price of our electricity was amongst the lowest in the world and Eskom was envied by many countries as a highly successful and efficient utility. However, complacency set in and the need to refurbish our energy sector was overlooked for many years.

While we have been lamenting the downward spiral in Eskom’s ability to keep the lights on – and the attendant blow to our economic growth – the global energy sector has started to witness a rapid transition from centrally planned, monopolistic power utilities that rely on fossil fuels to decentralised power markets that embrace alternative forms of energy. Many countries are now supporting the generation of electricity closer to the end-user, including self-generation and the presence of many competing buyers and sellers.

The world’s historical reliance on fossil fuel energy, maintained and controlled by centralized power authorities, is set to be replaced by dramatically different architecture, boundaries and capabilities.

Over the past decade, the cost of renewable energy has fallen dramatically and is already the cheapest and cleanest form of generation on the planet. And the ongoing innovation and increased scale of battery storage roll out is expected to drive costs down further. Used together, battery storage and renewables will be relied on more and more to provide base load energy. Thus, the world’s historical reliance on fossil fuel energy, maintained and controlled by centralized power authorities, is set to be replaced by dramatically different architecture, boundaries and capabilities.

Steps in the right direction

In spite of South Africa’s dismal energy situation over the past decade, significant steps have been taken to catch up with the global trend. Following the release of the updated Integrated Resource Plan (IRP 2019) and the Roadmap for Eskom in a Reformed Electricity Supply Industry (Roadmap for Eskom) in late 2019, the government reaffirmed its intention to procure much more alternative electricity in future. This will include multiple energy sources in place of coal, an unbundling of Eskom, and an increasingly decentralised energy sector.

In line with the government’s Roadmap for Eskom, the utility has a vital role to play in continuing to manage one of our crucial national assets, the 33 000km of transmission lines comprising the country’s electricity grid – the largest power line system on the continent. The plan sets out Eskom’s transformative function as an unbiased electricity market broker, facilitating the contracting of many different independent power producers and off-takers, and managing the balance of electricity demand and supply across the national grid.

The key concern for the country and its investors is the glacial slowness by government to implement these promising plans, while Eskom’s generation capacity continues to deteriorate. On top of this, the catastrophic setback to our economy from the onslaught of COVID-19 has emphasised the utmost urgency for new, clean and additional energy to:

Compounding Eskom’s dire financial position is the average age of almost 40 years of its fleet of coal power stations, with many closer to 50 years. As it stands, the utility does not have capacity to meet government’s forecast of additional electricity demand totalling at least 16GW over the next 10 years. Eskom has scheduled the decommissioning of at least 13GW from its end-of-life coal fired plants over this time frame, 28GW by 2040 and 35GW by 2050, equating to more than 80% of its existing coal plant capacity. This leaves no option but to establish new (and renewable) forms of electricity supply. 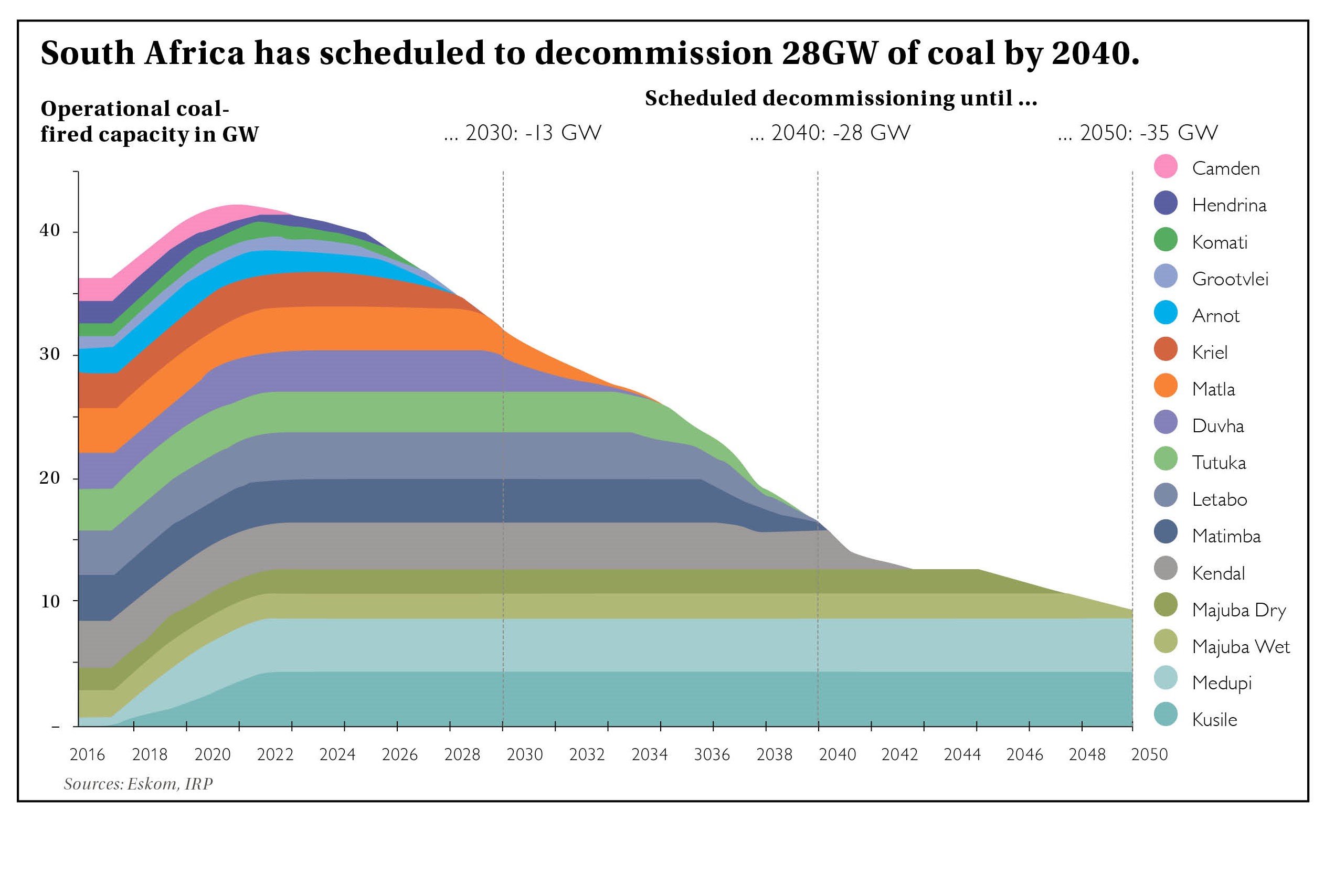 Reform of South Africa’s energy sector has the potential to reverse the deindustrialisation of our economy.

On the other hand, South Africa has massive advantages in terms of capitalising on the global trend towards renewable energy. It has:

Reform of South Africa’s energy sector has the potential to reverse the deindustrialisation of our economy, if given the impetus of local manufacture of equipment for new project investments. Investor confidence will grow on the back of the government’s actual delivery on its commitment to decentralise the energy sector and increase energy procurement from private producers. This will help catalyse economic growth and development, attract investment in new skills and training for South Africans, greatly assist with the reduction in unemployment and also facilitate the research and development of renewable energy technology for export to Africa, where massive growth opportunities await.

We must keep up

The disruption of energy is likely to resemble the digital disruption of data use. The permeation of the internet slashed the cost of information and opened the door to hundreds of new business models that collectively have had a transformative effect upon the global economy. The power to transform the South African energy sector and restore our economy is in our hands. We cannot afford to be left behind. DM/BM