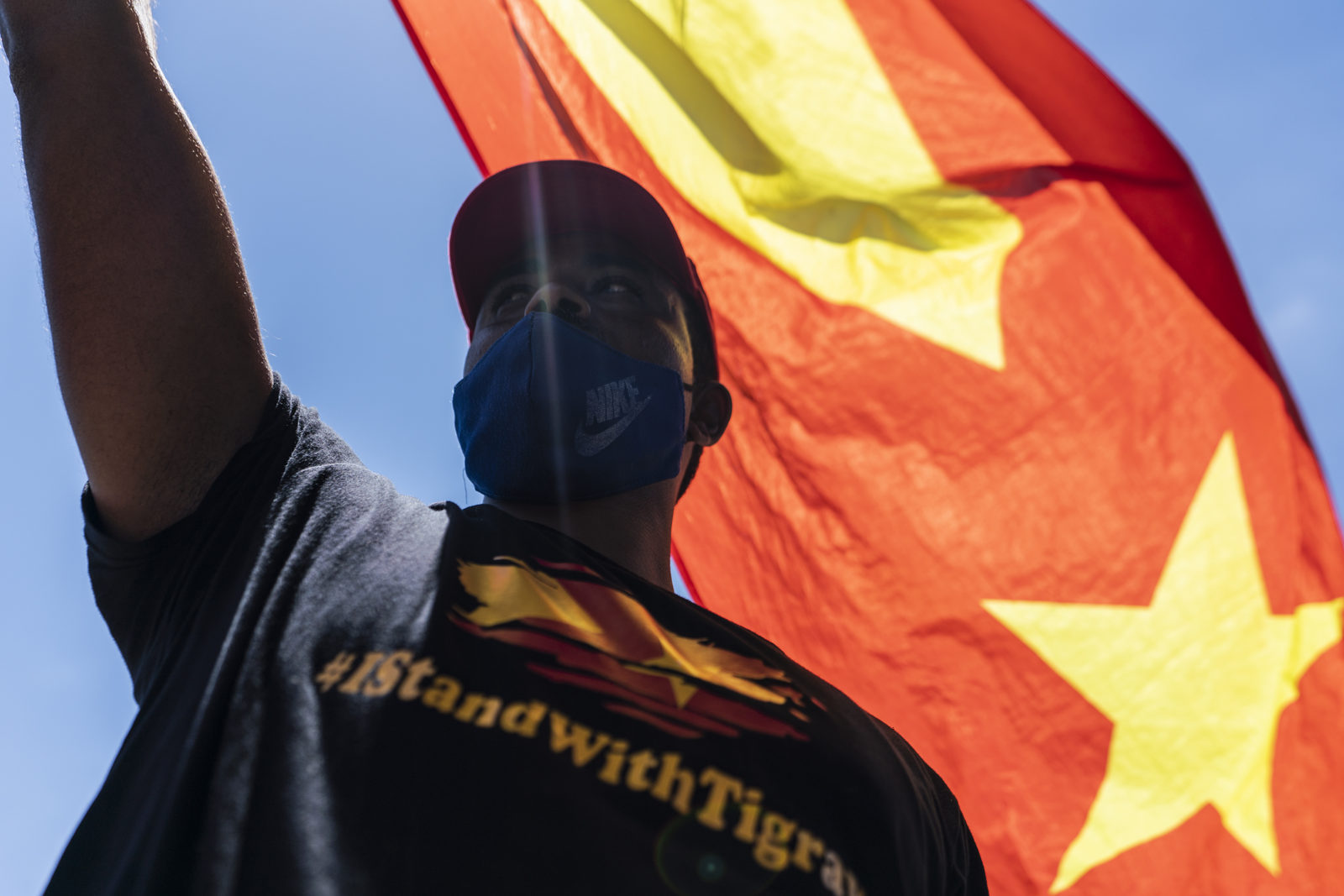 A man stands under a Tigrayan flag at the Pretoria protest. (Photo: Shiraaz Mohamed)

Despite limited access to information about the Tigray conflict, aggressive social media campaigns – both pro- and anti-government – sprung from the Ethiopian diaspora in a bid to shape the dominant narrative for an international audience, DFRLab has found.

Amid an information blackout over the conflict in the region, these campaigns, primarily coordinated by members of the Ethiopian diaspora engaging in grassroots online activism, have become an increasingly prominent feature of the information environment, as pro- and anti-government activists vie for dominance over a definitive narrative to explain the outbreak of the conflict, particularly to international audiences.

Conflict broke out in the region after Ethiopian Prime Minister Abiy Ahmed accused the TPLF of attacking a federal base. The TPLF was one of Ethiopia’s most influential political groups until Abiy assumed power in 2018. Tensions in the relationship between the TPLF and Abiy’s administration, which were already strained, ratcheted up after Tigray defied the national government and held regional party elections in September 2020, claiming any intervention in the process would amount to a “declaration of war”.

After Abiy announced on social media that a line had been crossed and military action was to take place in order to “save the country,” the Ethiopian government shut down internet and telecommunications access. Much of the population is still unreachable, despite journalists and aid organisations slowly being allowed access to the area, and telecommunications services being restored to parts of Tigray. The information blackout has made accurately documenting the crisis virtually impossible, creating an environment conducive to the spread of false information.

In this context, both supporters and critics of the Ethiopian government have taken to Twitter in an effort to shape the dominant narrative of what is going on in the conflict for an international audience, despite limited access to confirmed information.

On February 2, 2021, Abiy posted a tweet telling Ethiopians and members of the diaspora to spread accurate information about the current situation in the country, in response to disinformation allegedly being spread by TPLF supporters.

DFRLab identified a group of click-to-tweet websites that published pre-written tweets for users to instantly tweet content about the situation in Tigray for an international audience. The campaigns were coordinated to spread narratives promoting or opposing the Ethiopian government and its handling of the conflict. A large number of the accounts were only created after the conflict started. Some Twitter campaigns were planned in advance and advertised using social media, while others appeared more reactive in nature.

Overall, the campaigns successfully used a large number of accounts to tweet using pre-determined hashtags to ensure their narrative trended on Twitter.

DFRLab identified five prominent click-to-tweet websites that wrote and promoted Twitter campaigns, amplifying content relating to the crisis in Tigray. All the websites claimed to be independent and not connected to either the Ethiopian government or the TPLF. However, the campaigns appeared to position themselves as either being against the current conflict and the government’s treatment of people in Tigray, or supportive of the government and anti-TPLF.

DFRLab confirmed, through WHOIS searches and communication with the operators of the websites, that all the groups were run from the US by Ethiopian expatriates. Some were also linked to registered NGOs.

While the complexity of the websites varied, they all focused on promoting narratives via hashtags and tagging NGOs, foreign government officials and journalists in tweets, a tactic typical of online social justice campaigns.

Unity for Ethiopia, a pro-government and anti-TPLF website, broke down its click-to-tweet strategy into four parts: statement, mention, hashtag and activity. “Statement” included pro-government comments or information about the crisis; “mention” referred to tagging accounts belonging to NGOs, United Nations officials and journalists; and “hashtag” referred to the specific hashtag associated with a dedicated campaign.

A second blog post on the website, posted in Amharic, appealed to members of the Ethiopian diaspora to use social media to promote the Ethiopian government, indicating the Twitter campaigns were primarily directed at social media users located outside the country.

Stand with Tigray (SWT), an anti-government website set up to oppose the conflict in the region, similarly provided information on how to create social media accounts and appealed to members of the Ethiopian diaspora to spread information about the crisis. The site, which was founded by Ethiopian expatriates two days after Abiy launched his offensive in Tigray, is not accessible from within Ethiopia. According to the team running SWT, the website was blocked on February 25 2021 and has registered zero visitors from Ethiopia since then.

Both Stand with Tigray and Omna Tigray, another website opposing the conflict, contained click-to-tweet content in other European languages such as French and English, appealing to the US government, NGOs, civil society organisations and governments of other countries. While the pro-government campaigns also tagged international organisations to raise awareness about their narrative, they appeared to primarily target their campaigns towards the US. On March 9 2021, another pro-government website called Global Ethiopian Advocacy Nexus (GLEAN) – whose domain registration claims to be based in California, according to a WHOIS search – published a pre-written script next to the contact information for seven US senators, instructing their followers to call and state their opposition to the draft resolution on Ethiopia.

One of the primary characteristics of accounts that amplified pre-written tweets in click-to-tweet campaigns supporting both narratives was a distinct lack of identifying information. In November, The Washington Post spoke to users of newly created accounts who confirmed that instructions to promote hashtags such as #StopTheWarOnTigray were circulated in WhatsApp groups. Another pro-government supporter told the publication he joined Twitter after seeing pro-TPLF accounts trying to “influence international opinion”, likely by tagging international accounts in tweets opposing the conflict.

DFRLab contacted Stand with Tigray and Unity for Ethiopia, whose pre-written tweets were retweeted by anonymous accounts that were created after conflict broke out on 4 November 2020.

In an email, the Stand with Tigray team said: “Most of the people that use our pre-written tweets don’t have an understanding of what Twitter even is or how to navigate it.” They explained that they worked with their community to encourage them to create Twitter accounts and to amplify each other’s tweets to “get higher hashtag exposure”.

Unity for Ethiopia responded similarly, saying “Ethiopians at home and in the diaspora are virtually not present on Twitter platforms to counter TPLF misinformation campaigns” and that the platform worked to mobilise Ethiopian citizens and diaspora members to join Twitter in order to “counter misinformation content being propagated by TPLF operatives”.

The websites that amplified content supporting or opposing the conflict in Tigray all advertised their Twitter campaigns on social media and used pre-written tweets to create trending hashtags and connect with foreign influencers.

The hashtag most used by accounts opposing violence in the region was #TigrayGenocide. According to data collected using the social media monitoring tool Meltwater Explore, about 4.3 million original tweets (excluding retweets) were created using the hashtag between 4 November 2020 and 7 April 2021. They were created by 73,277 unique Twitter accounts at an average of 59 tweets per account.

Of the 4.3 million tweets, 76% were original posts rather than quote tweets or replies, indicating the effectiveness of the click-to-tweet campaigns. Even factoring retweets into the total tweets analysed returned a similar result, with original tweets making up the majority of tweets using the hashtag #TigrayGenocide.

One of the most successful pro-Tigray campaigns took place after an Amnesty International report on a massacre in the city of Axum. The report, released on 26 February 2021, implicated Ethiopian government-allied Eritrean forces in the systematic killing of hundreds of unarmed civilians on 28 and 29 November 2020, in what the rights group described as crimes against humanity.

On 26 February, a total of 5,850 Twitter accounts posted nearly 90,000 original tweets using the hashtag #AxumMassacre, an average of about 15 tweets per account, excluding retweets. As with previous anti-conflict campaigns such as #TigrayGenocide, the majority of tweets were from click-to-tweet campaigns where users posted directly to their timelines.

Of the 5,850 accounts, 3,842 were created between 1 November 2020 and 26 February 2021. These newly created accounts focused on amplifying narratives that opposed the conflict in the region by tweeting posts from Stand with Tigray.

In response to the #AxumMassacre campaign, pro-government accounts scrambled to coordinate a responding campaign. Primary hashtags amplified by the groups Rising Ethio and Unity for Ethiopia included #AmnestyUsedTPLFSources and #ShameOnAmnesty.

However, the opposing Twitter campaigns did not garner nearly as much attention as the pro-Tigray campaign using #AxumMassacre. A total of 945 Twitter accounts used either #AmnestyUsedTPLFSources or #ShameOnAmnesty on 26 February 2020, for a total of 12,430 unique tweets, excluding retweets. About 46% of the accounts were created after conflict broke out on 4 November 2020. Many of the accounts created in the past four months were blank and contained no identifying information.

As in the #AxumMassacre campaigns, the pro-government campaigns, while not as successful, revealed that the majority of tweets on the day were posted directly to Twitter accounts via click-to-tweet websites.

Although both pro- and anti-government narratives contained a significant number of blank, newly created accounts, DFRLab did not find any indication of automation. The accounts amplifying pro- or anti-government content were organised and coordinated primarily via click-to-tweet websites, but they appeared to be operated by real people.

The click-to-tweet campaigns also had a significant effect on which hashtags trended in Ethiopia. Hashtags such as #UnityforEthiopia, promoted by the website of the same name, as well as #TigrayGenocide and #TPLFisTheCause regularly trended on Ethiopian Twitter. The campaigns themselves were well organised, and even amplified by verified Ethiopian influencers, such as blogger Seyoum Teshome.

Ultimately, the Ethiopian diaspora’s participation in these campaigns affected which narratives spread on Twitter about the crisis in Tigray, despite limited access to verifiable information about the situation on the ground. DM

Follow along for more in-depth analysis from our #DigitalSherlocks.