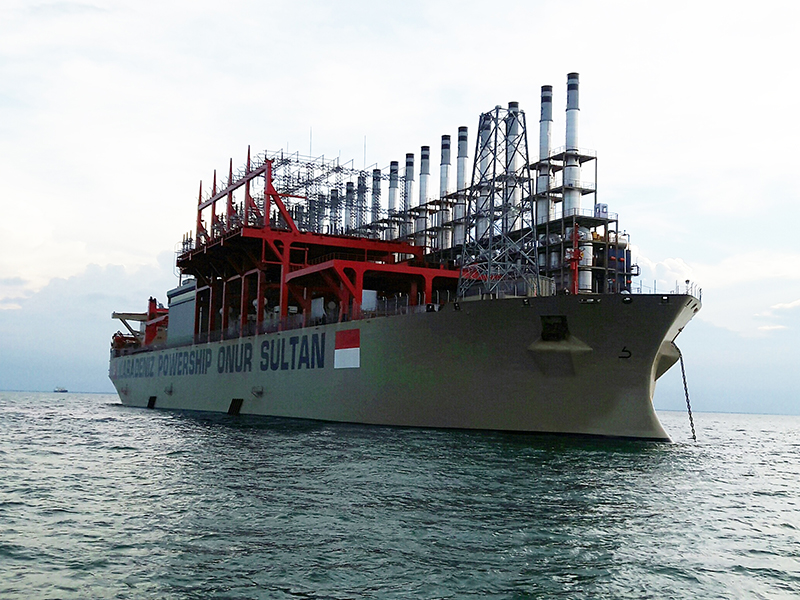 To cool down generators and steam turbines, the Turkish powerships extract large volumes of sea water every day before discharging the heated wastewater back into the harbour. A draft assessment report acknowledges that this will kill or disrupt several forms of marine life, but suggests that the damage will only affect a limited zone around the ships. However, no scientific studies or monitoring reports have been produced from other harbours where powerships operate. (Photo: Supplied)

The company of George Mokoena — the former adviser to former security ministers David Mahlobo and Bongani Bongo — holds a significant tranche of shares in the Turkish powership deal that was questioned at Parliament this week.

The adviser to former State Security Ministers David Mahlobo and Bongani Bongo is a major shareholder in the emergency powerships deal, which could cost South Africa R218-billion over 20 years.

Lawyer George Mokoena holds 20% of Powergroup SA, the BEE partner to the Turkish powership company Karadeniz. The two companies have formed a consortium called Karpowership SA which won the lions’ share of short-term emergency power contracts to stave off the impact of Eskom’s load shedding.

“He advised both Ministers in his career, long before he was involved in Karpowership SA’s response to the Risk Mitigation Independent Power Procurement Programme,” said Karpowership SA spokesperson Asli Surek KH.

Mahlobo was State Security Minister from 2014 to 2017; and Bongo from 2017 to 2018.  Both were associated with the high period of state capture under former President Jacob Zuma when the State Security Agency was one of the negotiating nodes for the failed nuclear project.

Mahlobo is now Deputy Minister for Human Settlements, Water and Sanitation and Bongo is an ANC MP.

Mokoena is a lawyer and shareholder in Matlama Resources.

He uses his role as adviser to the State Security Ministry as a calling card.

Tony Carnie revealed the long lobby to get the powerships into South Africa’s harbours here.  His report raised the alarm and saw the environment, forestry and fisheries department yank back a permit which allowed Karpowership SA to bid without a mandatory environmental impact assessment.

Massive powerships, which look like floating cities, could be moored at three harbours from 2022 for up to 20 years to provide emergency power.  Reports have shown that they are deleterious to marine life, dangerous to the environment and energy experts have questioned whether the liquid national gas fuel they use is a superior or cheaper form of energy.

Their supporters say it is a relatively cheap, quick and efficient form of emergency power.

Sharp questions were raised in Parliament on April 21 about the powership deal and the Department of Mineral Resources and Energy representatives said that while Karpowership SA is a preferred bidder, the government had yet to sign any contracts.

Carol Paton reported in March that the CSIR had calculated the powership plan would cost South Africa R10.9-billion/year or R218-billion over 20 years.

Government has a reputation for paying much more for big energy projects than initially planned or budgeted for – the new power stations Kusile and Medupi are not working properly but cost the public purse R300-billion by 2020, parliament heard in 2020.

“Energy does have costs – but load-shedding has a greater cost.  In the past ten years, load-shedding has cost the South African people over R338-billion. The Karpowership SA project is unique in that it can eliminate up to one stage of load shedding in South Africa, and if Eskom operates the contract at full capacity, we can go a long way toward eliminating a second stage of load shedding. This will be at much lower CO2 emissions than the peaking diesel generates. These are currently used to address load shedding in South Africa,” said Surek KH in a statement.

Fifteen environmental organisations wrote to Parliament this week to request public hearings into the powership deal because of serious concerns about the impact on the environment.

“Karpowership is committed to environmental protection at all costs, and we are fully compliant with South African environmental regulations and, in many instances, well below regulation limits. To even submit a bid, all bidders had to meet extremely high bars of requirements ranging from technology, price, environmental and economic development commitments,” said Surek KH. DM