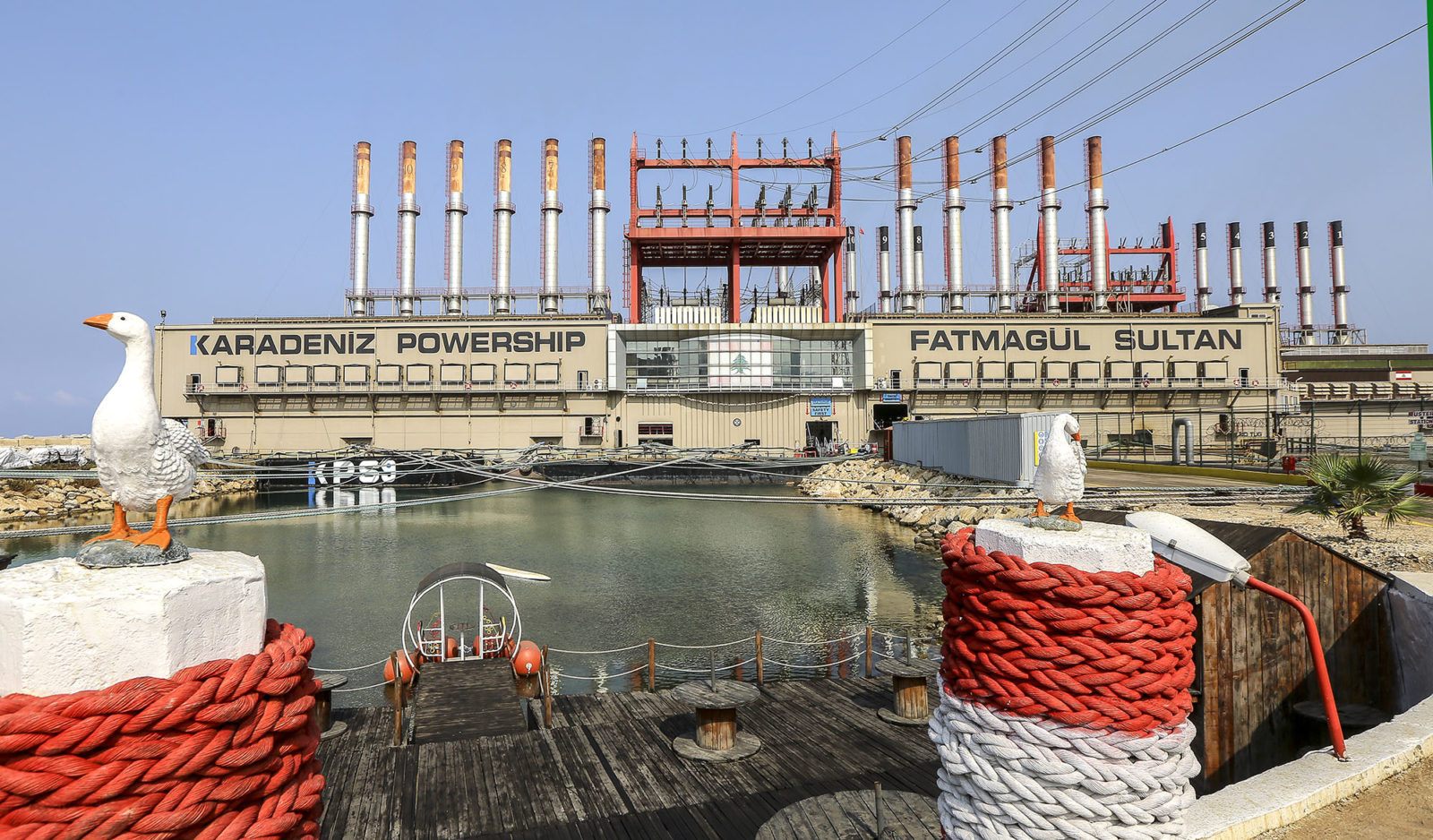 The Fatmagul Sultan floating power plant moored off the shore of the Lebanese town of Zouk Mosbeh, northern of Beirut, Lebanon. To cool generators and steam turbines, the Turkish powerships extract large volumes of seawater every day before discharging the heated wastewater back into the harbour. A draft assessment report acknowledges that this will kill or disrupt several forms of marine life, but suggests that the damage will only affect a limited zone around the ships. However, no scientific studies or monitoring reports have been produced from other harbours where powerships operate. (Photo: EPA-EFE / Nabil Mounzer)

‘The fact that some of the figures are all over the place suggests hurried and shoddy work. That puts a question mark over the credibility,’ says an environmental justice researcher.

In order to crank out roughly 1,200MW of electricity from its fleet of gas powerships, a Turkish company will trigger a cascade of direct and indirect environmental impacts around three of South Africa’s largest harbours.

One not so obvious example is the high water temperatures that will kill off a variety of marine life in the immediate vicinity of the powerships and possibly change underwater oxygen levels and disrupt the wider marine ecology around Richards Bay, Saldanha and Ngqura harbours.

This is because the powerships, much like giant kettles, use large volumes of seawater to cool down the heat from onboard gas and steam turbines, thereafter discharging the heated wastewater back into the sea.

The daily burning of fossil gas will also generate significant volumes of methane-rich greenhouse gases that exacerbate human-induced global heating, along with smaller volumes of toxic air pollution such as sulphur dioxide, nitrogen oxides and fine dust particles which enter the lungs of neighbouring residents.

Yet, according to three draft environmental impact (EIA) reports published last month by Karpowership’s environmental consultants, the projects should be authorised because they “will not result in highly sensitive environmental or social impacts” ­– should mitigation measures and specialist recommendations be adhered to.

The draft reports were compiled by Ballito-based environmental consultants Triplo4 Sustainable Solutions, the same company that procured an “emergency” EIA exemption for Karpowership at the height of the Covid-19 crisis last year — an exemption that was later revoked by national Environment Minister Barbara Creecy, who insisted that Karpowership follows the mandatory process.

Overall, the draft EIA reports assert that the greenhouse gas emissions from the Turkish powerships will be minuscule (about 0.16% of greenhouse gas emissions at a national level). But the compilers of these reports have also published several widely divergent emission numbers for the three harbours, creating confusion about the study’s reliability (more on these wonky numbers below).

According to the EIA reports on seawater impacts, the extra heat in the powership cooling waters will dissipate quickly, especially if discharged in cooler, deeper waters.

During an online consultation meeting earlier this month, marine ecology consultant Dr Robin Carter said the cooling water discharges were “nowhere near that of a boiling kettle” (100°C), but were nevertheless expected to be around eight to 15 degrees hotter than the surrounding seawater at the point of discharge.

But if this hot water was pumped back into the harbour at a depth of at least 8m, it would cool and disperse rapidly within a radius of about 300m to meet World Bank and SA water quality guidelines.

The report acknowledges that “severe changes in temperature close to the powership(s) will likely cause the demise of sensitive aquatic fauna” but suggests that overall impacts would be low and highly localised.

As the largest port in South Africa when measured by tonnage, Richards Bay has been degraded significantly by decades of development, but other independent studies by marine ecologists note that it remains one of the most important nursery grounds for prawns along the KwaZulu-Natal coast.

It has also been ranked as the third most important estuary in the country for fish populations. Every year, millions of larval and juvenile marine fish migrate into the Port of Richards Bay to use it as a sheltered, food-rich nursery area before swimming back out to sea to spawn as adults.

Notably, Karpowership does not appear to have provided the consultants with any scientific monitoring reports on the impact of heated water discharges on the ecology of other harbours in Africa and the Middle East where it has powerships.

As a result, the consultants had used 3D computer models to simulate potential impacts in the three South African harbours — and due to the high costs of such tests, the modelling expenditure had been cut by simulating only two months of the year in each harbour.

The Karpowership project consultants conclude that cooling water impacts are “acceptable”, but studies from other parts of the world continue to raise concerns.

One study suggests that more than 50% of power stations in the US dump cooling waters above the regulated limits, while a 2019 Chinese study showed that thermal effects of cooling water on the marine environment were evident as far as 3km from the discharge point of a 1,000MW nuclear power plant.

“Perhaps no other single environmental factor affects aquatic life as profoundly or in such a pervasive manner as temperature. Unfavourable temperature may affect reproduction, growth, survival of larval forms, juveniles and adults, and all the life processes necessary to maintain a healthy state,” the association said.

It also cited studies that degradation of the marine environment from heated effluent is greatest in the warmer tropics, because these organisms already live at temperatures only a few degrees below their upper lethal limit.

South Africa is ranked among the world’s top 14 greenhouse gas (GHG) emitters and has made pledges to gradually ramp down emission levels by switching to clean fuels and technology.

As a result, government energy and industry officials have sought to promote natural gas as a “cleaner” bridging fuel to help the country transition from its current dependence on carbon-intensive coal power emissions.

Karpowership’s draft EIA studies suggest that the company may emit up to 56 million tons of C02e (carbon dioxide equivalent) over the next 20 years and that the annual emissions would be about 18.7MT, equivalent to “roughly 0.16% of South Africa’s annual GHG emissions in 2017”.

But the three studies also provide widely divergent emission estimates. For example, one report states that the Richards Bay and Ngqura powerships will each emit 17.04MT CO2e over 20 years, while the smaller Saldanha powership would emit 12.5MT.

Yet, in a second report, the consultants say Saldanha emissions would be around 15.6MT CO2e while Ngqura and Richards Bay would each generate 20.27MT C02e.

Quite apart from the faulty mathematics in deriving an annual emissions figure of 18.7MT for all three Karpowership projects, the consultants also appear to have left out roughly 10 million tons of CO2e in the contradictory emission figures listed for the three projects.

Whether these published inconsistencies are due to sloppy copy-and-pasting errors in summary reports or more serious miscalculations remains to be explained before the public commenting period expires on March 31.

But as groundWork environmental justice researcher David Hallowes has commented: “The fact that some of the figures are all over the place suggests hurried and shoddy work. That puts a question mark over the credibility.”

Tracey Davies, an attorney and executive director of the shareholder activism group Just Share, has also raised concerns about the push to promote gas as a bridging fuel towards global decarbonisation. Writing in the Financial Mail, Davies said natural gas is made up of 95% methane, a more potent greenhouse gas than CO².

“It is truly remarkable how seldom we see even the most superficial interrogation of the truth or accuracy of gas-related pronouncements. This is particularly concerning because almost everyone who touts gas as a ‘game changer’ has a vested interest in gas-focused policy developments.”

She argues that there is no space left in the global carbon budget for new fossil fuel projects, especially for a country with existing high carbon emissions.

The draft EIA says predicted emissions of toxic air pollutants from Karpowership were not deemed to be significant for either Richards Bay, Nqqura or Saldanha.

Richards Bay, an industrial city that hosts several power-intensive industries such as South32, Mondi, Foskor and Richards Bay Minerals, is known for its high pollution levels and previous gas leaks linked to the death and disability of local residents.

As a result, the modelled emission estimates for Karpowership have surprised local health watchdog groups. Sandy Camminga, founding director of the Richards Bay Clean Air Association, has also challenged consultant statements that sulphur dioxide levels in the city are “relatively low” and below the national air quality standards. She points out that exceedances of the national standards have been and continue to be measured in at least two monitoring stations closest to the port.

Camminga is also concerned that the EIA reports refer to the potential use of heavy fuel oils (HFO) as a combustion fuel for Karpowership — despite assurances from the company that this more toxic fuel would not be burnt in South African ports.

Karpowership sales manager Patrick O’Driscoll has given assurances that though powerships can run on both fossil gas and HFO, the company would only use gas in South Africa.

Curiously, however, the EIA report includes this statement:

“So why include such statements if Karpowership has emphatically committed to not burn HFO?” Camminga asks.

Noting that HFO is a cheaper fuel than gas, Camminga fears what might happen if imported LPG supplies were to run short in two or 10 years’ time. Would Karpowership shut down its generators — or would it simply switch over to HFO and argue that it had no alternative because of the national power crisis?

This is why Camminga insists that if the Richards Bay powership plan is authorised, there should be cast-iron clauses to prohibit the use of HFO without a further comprehensive EIA on this issue. DM