OP-ED: THE DEATH OF PHILEMON

Who is being untruthful? Challenging Felicity Purchase’s version of a meeting about baboons 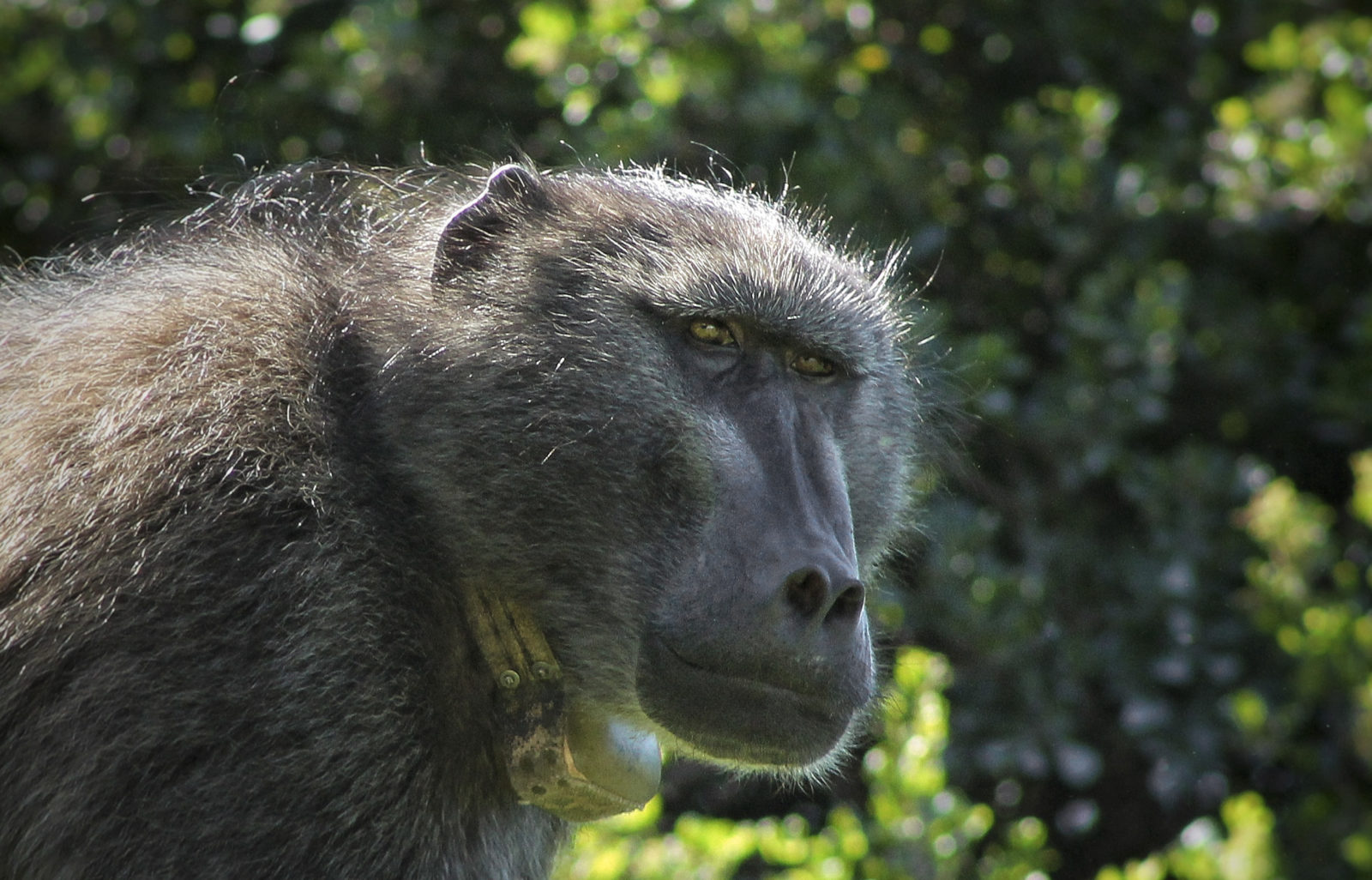 Philemon, who was put to death, has been described as 'a serious and complex baboon'. (Photo: Anya Adendorff)

As the Councillor Appointed Representative for Baboons in the Scarborough, Cape Town area I have to challenge the alderman on what transpired at a recent meeting.

Regarding Purchase’s response to my letter to Daily Maverick, in which it is stated that my version of events at the meeting is untruthful, I would like to refute several comments, using a transcript from the meeting to provide direct quotes, which I believe will show clearly where the truth lies.

Purchase claims that NCC Environmental Services gave an overview of its operations since the start of its contract. I am not sure what she is referring to here, since at no time did NCC give detailed feedback on its activities, in contrast with all previous Councillor Appointed Representative for Baboons (CARBS) meetings I have attended, where the previous service provider would use a PowerPoint presentation to go over its monthly stats for each baboon-affected area.

After a lengthy speech from researcher Justin O’Riain, in which he seemed to try to shift blame for the current protocols which resulted in the Kataza fiasco onto residents and Baboon Matters – despite the fact that residents and Baboon Matters have been loudly calling for a revision of the protocols for years, and a discussion around the fact that the City appears to have no plans to get baboon-proof bins distributed for at least two years – I asked why we were not hearing from the new service provider. In fact, they had been so silent that my words were: “I am just curious as to if they are actually there?”

Councillor Simon Liell-Cock then asked the NCC attendees to put their hands up, which they did. I then asked two questions of NCC: How could CARBS reps and communities better assist with baboon management on the ground; and why was Buddy relocated, given how horribly wrong Kataza’s relocation had gone. Liell-Cock, rather than allowing NCC to respond, said, “Julia, take that one”, referring to the City’s Julia Wood. Wood said that while the initial plan had been to give NCC the opportunity to present to us, “we quickly threw that out because we felt we needed to hear from the CARBS”. Unfortunately, it is my perception from previous experience that gestures such as giving us the floor are simply a way of avoiding giving us any real information and creating the appearance that we are being heard. The point, however, is that it seems quite clear that NCC was not given a platform to present any meaningful information to us at this meeting.

Purchase claims that resident Mike Gibson did not state that the NCC was doing a poor job (I did not claim the word “useless” was a direct quote). In fact, this is verbatim what Gibson said: “Undeniably, since NCC has entered the management contract with the City since October last year there has been a significant and serious increase in number, frequency and seriousness of invasions by the Smitswinkel troop into our residential area. It’s undeniable, the facts bear it out and over the last six to eight weeks in actual fact it has basically escalated to a situation which is out of control. Unfortunately, unless much stronger management principles and management protocol are given effect, on the ground it’s going to get worse.”

I am not quite sure how Purchase interprets these words, but it seems rather clear that Gibson was seriously dissatisfied with NCC’s performance.

Purchase then goes on to say that none of the CARBS attendees (I assume she includes Gibson in this group) called for the killing or removal of any baboons. I would really ask how then she interprets Gibson’s words: “The authorities have not been given the space to, in actual fact, implement the protocols. My call this evening is to allow the authorities the space to implement the protocols and those protocols do lead to relocation and euthanasia of, let me say, habitual invaders. But which unfortunately aren’t being done.”

Purchase also states that there was an opportunity for further comment before the meeting was closed, implying that we were given the forum to respond to Gibson. This is simply not true. Before any of us had an opportunity to respond to Gibson, Purchase interjected, saying: “My experience with baboons over the last lot of years is that if they are now starting to invade homes in Murdoch Valley then it’s because someone has been feeding them or they’ve found access to good food like a fruit tree or veggie garden or someone thinks they are their friends. So, before we move any baboons, we need to deal with what’s the cause of the problem. So, I think at the end of this meeting now we are going to – we are all taking notes – we are going to try and see what the issue is around Murdoch Valley before we wrap up and decide we’re going to be moving or culling any further baboons. I take your point that it is obviously becoming a problem, so we’ll try and find a solution to that problem.”

At this point, one of the CARBS reps at the meeting, Chantal Carstens-Luyt, who had been the rep for the Smits troop until she was replaced by Gibson without her knowledge, attempted to respond to Gibson. However, she was told by Purchase off the record (Carstens-Luyt has submitted this statement to Daily Maverick) that she should rather keep quiet so as not to spur Gibson on. We were therefore encouraged to believe that Purchase had made a commitment that baboons would not be harmed (that seems very clear from her statement above), that we should not be concerned about Gibson’s request for lethal action to be taken against any members of the Smitswinkel troop and should rather not give him further platform.

It seemed clear that we were not going to be given an opportunity to respond and that we should drop it, when Liell-Cock invited Lizel Steenkamp from the City’s communications office to speak next. She used this opportunity to express apparent support for what Gibson had said: “So, we need the residents who are actually supporting us to be more vocal on social media. They need to come out and they don’t need to say, listen, this city is wonderful, that’s not what we expect, but like your comments earlier tonight, please give the authorities the space to do their work.”

Perhaps our DA councillors need a reminder of the nature of true activism and what it has accomplished in the fight against injustice in our own history.

It seems clear from this that the City was only too delighted to find someone who was “in their camp” and wanted to encourage him to continue to raise support for his views.

Most importantly, I would like to respond to Purchase’s statement that “it is absolutely ridiculous to suggest that the euthanasia of the raiding male baboon from the Smitswinkel Bay troop is based on a request from a resident/group of residents from Murdoch Valley”, by quoting a now widely circulated email from Gibson to “Good Neighbours”, sent on 8 April:

“I urge you all to continue engaging with neighbours and sending me their contact details so we can continue to grow our support base. As you will by now have seen via the press, a large male baboon from the Smits troop has been euthanised. I received a call from COCT earlier in this regard. An unfortunate, but necessary step in the right direction. Our efforts in voicing our dissatisfaction in the correct forums and reporting and engaging with the authorities are gaining traction and I am pretty sure that our efforts provided supporting motivation for the authorities to act decisively.”

In addition to the fact that Gibson certainly seems to believe his actions were instrumental in the death of Philemon, I find it most interesting that he received a personal phone call from someone in the City at the time the deed was carried out. No CARBS rep has been afforded this courtesy before and I cannot help but wonder why Gibson has been given such special treatment.

Lastly, while Purchase may find it concerning that property owners who complain about baboons are “vilified” on social media, I find it strange that she seems to believe it is absolutely fine for those who care for baboon welfare to be labelled “vociferous activists” by Gibson and blamed for all current problems around baboon management. Perhaps this is because his words echo that of ward councillor Liell-Cock, who has openly mocked “activists” in an apparent attempt to disparage anyone who calls the City out for its behaviour with regards to baboon management.

Perhaps our DA councillors need a reminder of the nature of true activism and what it has accomplished in the fight against injustice in our own history. The treatment of the public by the City of Cape Town in relation to baboon management is appalling. This matter goes beyond conservation and animal welfare issues and exposes a system where public servants seem to feel entitled to mislead the public and ignore any attempt at democratic processes. I for one, have had enough. DM/MC