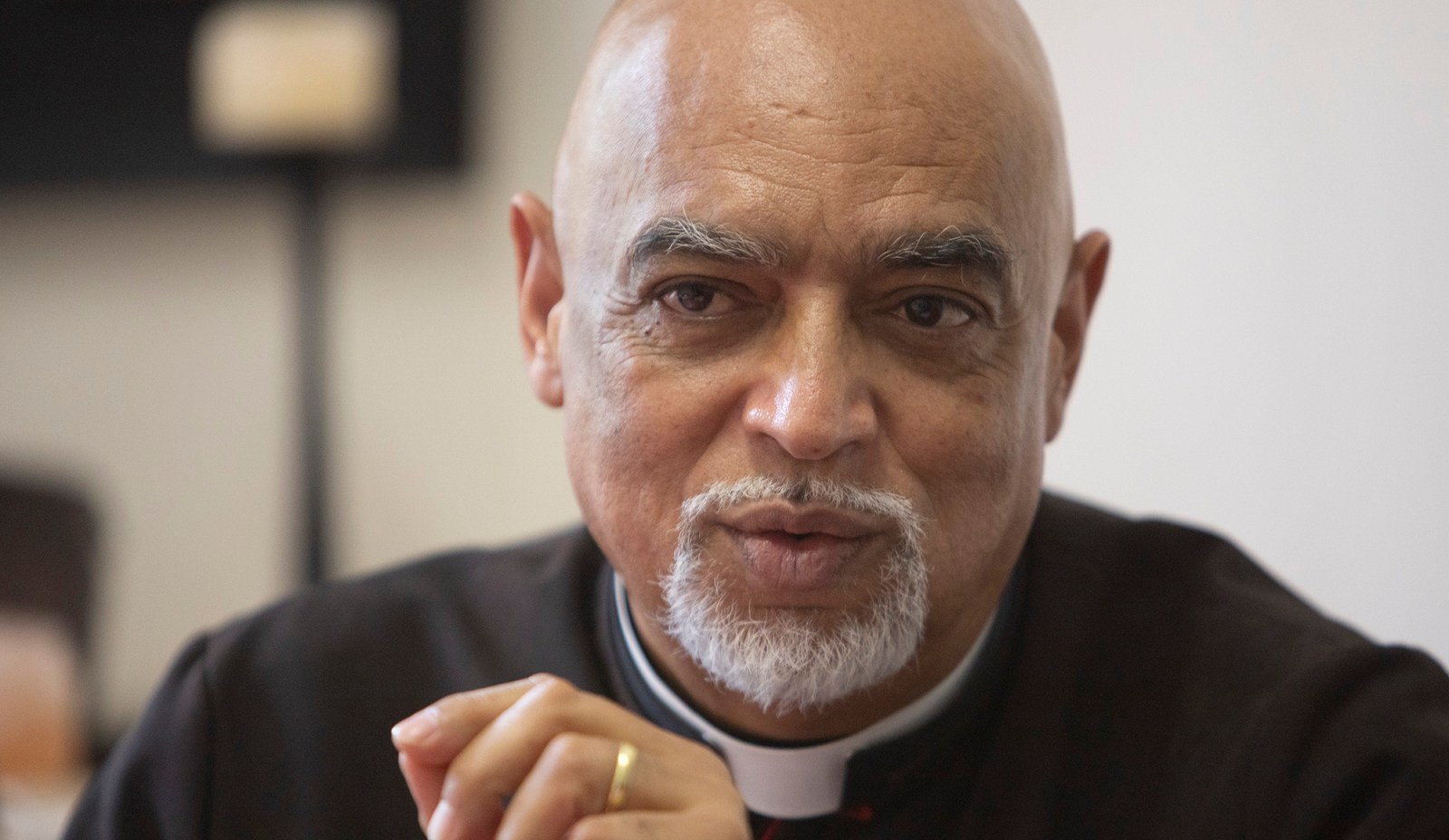 The Reverend Michael Weeder doesn’t shy away from criticising corruption in the SA government.

Michael Weeder does not fit the narrow definition of a stereotypical reverend. The Dean of St George’s Cathedral in Cape Town is also a poet, a jazz enthusiast, and a vocal critic of corruption.

He has never been one to be boxed in.

When he was seven, his parents divorced. He moved with his mom and three younger siblings to Elsies River from District 6 in the city of Cape Town. Elsies River, a predominantly coloured area in terms of apartheid spatial planning, was different from what Weeder had been used to. “I didn’t fit the demographic; I spoke English, we came from Cape Town, we were Anglicans and, by appearance, I fitted in with the Muslims and the Hindus,” said Weeder.

But, in the church, in which he grew up, he was accepted – and that’s what drew him to the church and later into political activism. “For me, the church was the people of Elsies River, it was Mr Jacobs [from my church]. It was the aunties from the prayer meetings [who] loved me beyond my home.”

Likewise, with the struggle, it was the people he met and spoke to who drew him into the African National Congress, and not necessarily the big personalities such as Nelson Mandela, said Weeder.

In apartheid South Africa, there were many things that Weeder had not been exposed to. As an 18-year-old, he didn’t know he was oppressed. He had never heard of Mandela.

Then one night in the late 1970s he went out, and his worldview shifted. “The one day I was at Cosy Corner and Lady Wants to Know by Michael Franks was playing, it’s this soft jazz song… There was something about that sound and that experience. I was taken out of my church comfort zone… It was wonderful, it rewired my mind. I listened to stuff differently, I started falling in love with jazz music.

“That gradual orientation, that immersion into another part of Cape culture that wasn’t so church-based… It was a gentle dip into an alternative view of the world we live in.”

Weeder’s knowledge of the brutal apartheid state that millions of people who weren’t classified as white lived under deepened during a year-long church programme in Pietermaritzburg in the early 1980s. He was introduced to Black Theology, Liberation Theology and Karl Marx.

“I came out of there quite informed,” he said.

He said he was also “ready to moer someone” in anger at the injustice in the country. “But you don’t know who to be angry with, you just see that this is wrong and it’s been wrong all this time.”

Weeder, who’d felt that his calling was to serve in the church from a young age, was able to reconcile his anger at an unjust apartheid state and his Christianity because of the Anglican church’s history of anti-apartheid activism. One of the most iconic South African Anglican church leaders, Archbishop Desmond Tutu, used his influence to oppose apartheid. Tutu also often preached at and led protests from St George’s Cathedral.

In 1984, he was awarded the Nobel Peace Prize for his activism.

“It was an anger and an awakening that was facilitated within the church by people [who] said: ‘There’s a different way of Christianity, that Jesus isn’t white, that in heaven, English will be one of the languages and that God isn’t this old white dude and Mary looks like your mother or your sister,’” Weeder told DM168.

Weeder, who has been the Dean of St George’s since 2011, has never shied away from criticising the endemic corruption in South Africa or the way that the church does things.

Walking around the oldest cathedral in Southern Africa, he showed DM168 the flags of former colonialist countries hoisted up in the church. These flags represent the courage of colonial resistance. They also spoke to who stole the land, how they did it, and what they did to us, he said.

If a church wasn’t comfortable addressing its colonial history, it would also struggle to address other injustices, such as sexual violence in the church, said Weeder.

And, for many people, the Anglican church has struggled to adequately address the issue of priests sexually abusing church members.

In a desperate attempt to get justice, last year, Reverend June Dolley, an Anglican priest from Cape Town, went on a hunger strike outside Archbishop Thabo Makgoba’s home in Bishopscourt. Dolley demanded that Makgoba hold accountable the priest she alleges raped her 20 years ago in Makhanda (then Grahamstown). Dolley spent six days sleeping in a tent outside Makgoba’s home and only left once he made a commitment to start an internal disciplinary process against her alleged rapist.

“I feel as a church we let down the Makgoba family when we did not raise our voice and support [them] when their home was besieged in Bishopscourt. While it is the official residence of the archbishop, it is also the home of a family and I think their privacy and their own safety in terms of mental and spiritual [wellbeing] was invaded,” Weeder told DM168.

Dolley claimed that the police mishandled her case when she initially reported it, and now she was seeking justice from the church. Dolley reported the alleged rape to the church’s Safer Church Initiative, which was established by the church to look into sexual abuse allegations.

“I trust the integrity of Archbishop Thabo [Makgoba] when he says to me that there is a process involved and the process will be in effect in due course,” said Weeder.

But he thinks that the church needs to ensure women feel safe in the church. “The church is your home and we need to ensure that people are safe here.”

As we head for a second Easter during the Covid-19 pandemic, Father Weeder is preparing to deliver his Sunday sermon – virtually. DM168

It’s a picture of my children when they were seven, five and four.

I actually can’t think of anything, hey.

How to play the saxophone.